Company of Heroes: Back to Basics

Back to Basics is a full conversion mod for Company of Heroes and its expansions. The aim of the mod is to create an environment that respects the nature of the original Company of Heroes gameplay, while expanding core features to put further focus on tactics, proper decision making, and player skill. Back to Basics can be played PvP, but also features AI opponents capable of challenging battle-hardened players.

Company of Heroes: Back to Basics has active development. We continue to develop the mod to consistently improve the core gameplay, game balance and overall player experience.

Back to Basics on Steam™

Company of Heroes: Back to Basics is available on Steam™.

Check our steam page and articles for additional details and information.

Join our Discord! This is our main community hub where we share our development progress, offer technical support and grant the opportunity to discuss the mod.

You can invite anyone to this server! Just use this invite link: Discord.gg, or refer to this article.

Back to Basics features over 30 brand new units spread across the four factions, while existing ones were revised to fit the core gameplay the mod offers. Each unit was carefully selected and designed, offering diversity while retaining clear unit roles and purposes to avoid unnecessary unit overlap. Many of the original core unit designs and envisioned roles were kept intact to retain a sense of familiarity, yet were expanded upon to enhance the overall depth and complementary dynamic between units.

Command Trees have been expanded to permit various progression paths that synergise with various faction strategies. The nodes for each branch were shuffled around to offer more interesting choices throughout, while also mitigating the evident power differences between branches. Practically every feature in each of the Command Trees received some attention; from minor balance adjustments and bug fixes, to fully revised functionality of certain abilities, units, and upgrades, and plenty of new content has been added with the aim to broaden the versatility of each tree.

Along with new units, abilities, upgrades, and command trees, the mod features an entirely new weapon damage model as well as brand new gameplay mechanics. The damage model is generally more lethal with a lower time-to-kill than the base game. At the same time it is as fair, balanced, and consistent as possible with almost all instances of instant squad wipes removed from the game. New gameplay mechanics featured in Back to Basics include “Enfilading fire”; squads receiving fire from multiple directions are prone to taking more damage, “Anti-blob”; clumped up infantry squads receive penalties to their overall combat effectiveness, and “Regeneration”; infantry squads out of combat will slowly regenerate hitpoints over time.

Those who take the time to understand and adapt to the enhanced damage model and mechanics will find that the battles are dynamic, with a wide spectrum of playstyles being viable. The impact of utilising different types of weaponry is strong and worthwhile, as each weapon has a unique role and performance. Consequently, proper army composition and unit positioning are essential factors that players have to consider in order to turn battles into their favour.

Back to Basics touches every aspect of Company of Heroes AI as well as introducing entirely new features for an experience that is unique to Company of Heroes as a whole. All combat logic is replaced with custom functionality - individual units are more aware of their surroundings and have much more complex behaviour. ​AI difficulty scaling no longer relies on scaling unit hitpoints.

Custom logic for spreading out units across the map allows the AI to have a good variety of head-on engagements as well as flanking attacks. Larger-scale AI decisions and unit purchase logic have been remade almost entirely from scratch. Changes include fixes to major bugs, a massive rebalance of existing and newly added functionality, and full integration of the mod's unique content and features. The result is a dynamic AI that is much more aware of the various unit class interactions, continuously trying to counter whatever the player is fielding. Our implementation of AI build orders and personality randomisation should result in diverse choices of tech paths and army compositions game to game.

All-in-all, players may experience a refreshed AI battle experience, featuring 8 AI difficulties that can be challenging and unpredictable for all skill levels, while also being both fair and enjoyable to play against.

Campaign compatibility is supported for all three major campaigns (Invasion of Normandy, Liberation of Caen, and Operation Market Garden), as well as the three tales of valour (Tiger Ace, Causeway, and Falaise Pocket). The campaigns have seen major enhancements and fixes to many of the iconic missions and objectives. Scenarios now also incorporate many of the mod's unique content and features for an overall refreshed experience.

Back to Basics features an array of adjustments that aim to improve the overall player experience. Changes range from minor bug fixes to overhauled mechanics and gameplay features, including more responsive unit behaviour and vehicle pathing as well as the elimination of the "invincible at 5% health" bug for vehicles.

We really appreciate all kinds of feedback. Let us know on Discord or here on ModDB what you think about the mod and we are sure to reply and answer questions. 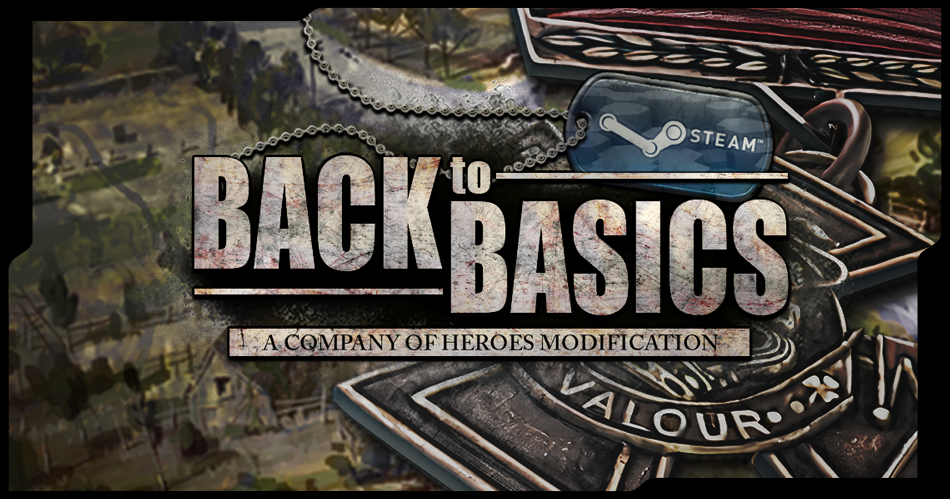 With utmost excitement we can finally reveal that Company of Heroes: Back to Basics is coming to Steam™️!

We are also glad to announce that Back to Basics 5.0 is scheduled to be released on July 2nd, 10 am PDT (5 pm GMT, 7 pm CEST). The release will be available solely on Steam™.

AI has always been a core feature in Back to Basics, and 5.0 introduces our most advanced and complex AI yet! The result is a dynamic AI that is much more aware of the various unit class interactions, continuously trying to counter whatever the player is fielding. All-in-all, players may experience a refreshed AI battle experience, featuring 8 AI difficulties that can be challenging and unpredictable, while also being both fair and enjoyable to play against.

Lastly, the mod continues to offer full campaign compatibility. Alongside bug fixes, many of the iconic missions have been enhanced for an overall refreshed experience!

Check our steam page and our previous articles for additional details and information.

Join our Discord! This discord server is where we share our development progress, offer technical support, and offer the opportunity to discuss the mod.

You can invite anyone to this server! Just use this invite link: Discord.gg, or refer to this article.

Thank you to everybody who has provided us feedback and shown interest and excitement for Company of Heroes and our mod throughout all the years.

We are excited to enter this next chapter with you.

Showcase of the revised Command Trees featured in Company of Heroes: Back to Basics 5.0.

Showcase of one of the major features of Company of Heroes: Back to Basics 5.0; the revised Americans faction.

Showcase of one of the major features of Company of Heroes: Back to Basics 5.0; the revised Wehrmacht faction.

Showcase of one of the major features of Company of Heroes: Back to Basics 5.0; an overhaul of the Commonwealth faction.

[OUTDATED] Back to Basics v4.1

The v4.1 update of Company of Heroes: Back to Basics is now available!

The long awaited v4.0 update of Company of Heroes: Back to Basics is now available

[REQUIRES BACK TO BASICS V3.0 AND COMPANY OF HEROES PATCH v2.602] This patch addresses some gameplay bugs and imbalances, fixes some language errors and...

Is it possible at all to turn off the timer on campaign missions? One of the advantages in the campaign is the ability to relax and progress at your own pace instead of this bull rushing.

Timers are dynamic based on the difficulty you play. If you play the campaign on a lower difficulty the timers become significantly longer, to a point where they are almost unnoticeable.

We have received some feedback on certain missions being too difficult after recent AI changes, so we may have to tweak specific missions and adjust the timers respectively. Which missions are you specifically having issues with so far?

I play COH in low settings because my current laptop is not very powerful. If i install this mod will it affect the performance?

Mod does require more PC resources than standard game due to increased amount of scripts and generally improved AI. COH is mostly bottlenecked by single-thread CPU performance, so if you have old PC but it's still pretty good in terms of single-core CPU performance, you might be ok. A lot of models have extra accessories, but you can probably adjust this with the model detail slider in the settings, as well as other settings. Some textures are also higher resolution and there are minor special effects that are added graphics-wise, but that doesn't really impact performance much.

Thank you very much for releasing this amazing mod on Steam!

I keep getting 'failed to update, app config not available.

Try the following please:
- Right-click the mod in library tab and select Properties.
- Navigate to the Local Files tab and click on the Verify Integrity of Game Cache option.

It's a shame the improved AI can't be incorporated into other mods as well.

Back to Basics Mod Team

The mod is very realistic and the models are goodlooking.

This is worth trying. I enjoy it, and i'm sure, hundreds of people with me.

Single & Multiplayer
Tags
Embed Buttons
Link to Company of Heroes: Back to Basics by selecting a button and using the embed code provided more...