88 Flak is a fast-paced combat mod for the 3D action game Freelancer by Digital Anvil. It aims to bring quick and brutal arena-like combat to Freelancer with Unreal Tournament 2004 style speed and years of refined Team Fortress inspired class balancing. In addition, it aims to expand the gameplay experience with numerous new features, including docking on player Battleships (use teammates as mobile bases), purchasable stations (private bases that shoot at hostile NPCs and players), hiring AI wingmen, dynamic AI routines (88 Flak's AI is hailed to be the best in Freelancer), ability to script story missions in multiplayer (extremely beta), AI Bots (persistent NPCs with their own reputations and loadouts), and full customization via a Freelancer Mods Manager script with configurable client-side and server-side options such as advanced graphics/audio and more.

88 Flak has been in the works since January 21, 2005, and continues to be developed today by members of the community. Anyone from lone players to full clans are welcome to either join in the fun on the 24/7 server or get active in the project's development.

The main goal of the mod is to provide intense combat while keeping everything at an even, balanced level. Instead of linear balancing for ships, 88 Flak adopts a more "circular" balancing where nothing is better, just different. For instance, Light Fighters are dogfighting vessels: very fast, but limited in firepower - while Very Heavy Fighters are the opposite: slow, but armed with Torpedoes and cloaking devices for tactical bombing runs. The basic "balance circle" goes like this: Fighter > Large Capital > Small Capital > Fighter. Players must have a well-rounded selection of several different ship classes if they wish to maximize efficiency of their fleet.

And it only starts there; a vast selection of 56 Fighters/Freighters, 17 Capital Ships, 31 Stations, 9 Weapons Platforms, 2 Liners, 5 Transports/Trains/Lifter, the Repair Ship, and finally the unique Storage Depot can all be piloted - all built directly from original Freelancer content to fit fight in without feeling "tacked on."

Finally, 88 Flak's most robust change to the Freelancer formula is the AI, and that they are no longer dull pawns spawned for the sole purpose of being slain in a few seconds. Instead, AI NPC ships are capable of performing most tasks that players themselves are capable of; this includes, but is not limited to, traveling anywhere in a system to perform anything from trade to station raids, hiring themselves out to players or other NPCs as wingmen, dropping a fight to pursue a fleeing ship, using counter-measures to stop missiles, extensive usage of afterburners and strafing, and salvaging loot off the battlefield to sell (or use). 88 Flak's AI is hailed as the most advanced AI ever seen in a Freelancer mod, and will thrill even the most hardened PvP combatant.

A Gift for OpenSP Players

Hey folks, it's been a real long time since I've updated this page, so I figured I'd give it a go. As some of you may be aware, 88 Flak supports the ability to hand-pick your own AI Bot wingmen squad for OpenSP or LAN usage. Well, now in addition to being able to hand-pick your wingmen, you can now select their standing orders - currently Superiority or Siege (prioritize Fighters or Capital Ships, respectively), however I plan to add more before release - such as Cover (attack only ships in your immediate vicinity), Raze (prioritize stationary gun emplacements), and Assault (prioritize bases and other solars)

Here's a picture of the selection menu in action: 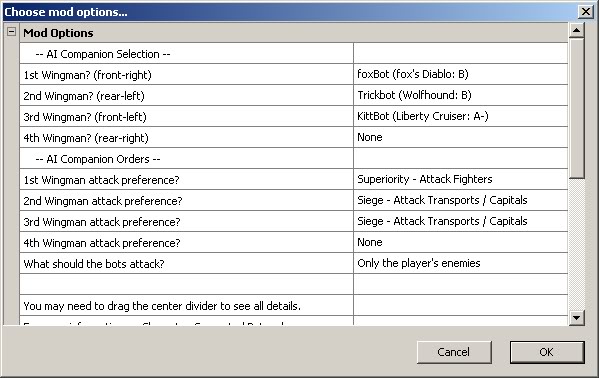 This (and much more!) will be featured in the upcoming RC131 release, which will be ready for launch shortly! More articles about other new features will be posted soon as well. Enjoy!
fox

RC130 Release Around the Corner

Small post detailing the changes for RC130, which is due out in a few days (if not tomorrow!)

A basic summation of RC129's changes, set to release this coming week, after which a full version featured on ModDB and various community sites will be...

88 Flak is a fast-paced combat mod for the 3D action game Freelancer by Digital Anvil. It aims to bring quick and brutal arena-like combat to Freelancer...

"So. Seems to be that the global server is down nowadays so I'm gonna pin this. If you place this after the game path (target) in the shortcut config...

RC130 Server-side Hotfixes that were installed on the 24/7 Dedicated Server. This is ONLY needed for servers - clients do NOT need this patch (though...

What originally started as bugfixes to RC129 to ensure that everything will be stable for a full release eventually spiraled into the download you see...

This hotfix is only needed for servers. It contains a new FLHook module with several fixes to remedy stability, which will fix nearly all of the server...

Damn man, despite brave attempt to overhaul the original gameplay itself, that was probably the most interesting FL mod, with lots of unique ideas and additions, from which some another more successful mods could still take a bit of inspiration.
Gonna enjoy it one more time at least in SP, one day.

I was very active in the community years ago :) I was trying to locate the old 88 flak forums or some archives, but it seems its all been lost to the abyss. :(((

True, but still you could go for SP or setting up a server.
SP gives quite enough content though.

88 Flak Portal is down? Was looking to fire up this gem of a mod again but the portal hosted the music packs download if I recall correctly and they were awesome. Anyone know if the music packs are hosted on Mod DB?

Believe it or not, there's actually an unreleased(ish) WIP version from 2016(!) floating around at drive.google.com/drive/folders/0B8y8z35Y1fY_YWxnQWJZc0FwN28 - which contains the soundtrack, among other things. Unfortunately, this was never officially finished and released... Maybe some day?

Is the server working? i dont see any 88flak server in the game. It is not listed on fl server list aswell