The problem with multiplayer mods is the lack of players; the solution is to play them. That's where the Modding Social Club (MSC) at ModDB comes in. Want to get social? Pop into our bi-weekly event-- just join a server of our target game with people in it.

Today the second mod cast will air, keeping you up to date on the latest mod news and releases! This week we are joined by a developer or two from No More Room In Hell!

We'll be chatting with the No More Room In Hell developers during the show and playing the game afterwards as well!


Come kick back and join the community as we delve into the wonderful world of mods!
If you miss the stream worry not, the cast will also be published over at our youtube channel so be sure to subscribe and enjoy it later.

The Mod Cast is not possible without the help from our friends at custom gamer, mod informer, and eat at medve's they all cover content featuring custom maps and mods, you should check them out.

Where Have We Been?

I guess I’m chiming in to say, I still haven’t given up on Modinformer, and it’s more of a time issue than anything. Modinformer is still under my name, and I do not plan to give it up or give up on it. I still have projects i have plans for and stuff i’d like to eventually incorporate into Modinformer.

To give light onto my personal life, I recently moved into a new apartment with my girlfriend of 2 years, this new apartment features 2 bedrooms for us to put our STUFF into. I have claimed the bedroom i’m typing this in for myself, and my games, which gives me a nice opportunity to focus. I believe some people would call this type of room a “Study” .

I’ve watched alot of videos online, mainly Classic Game Room which inspired me to start reviewing mods in the first place, and when I watch these reviews it triggers the same feeling inside of me to start reviewing again, and start coming out with more content for everyone to enjoy. The most challenging thing for me is what should I review?

I believe, reviewing older mods is almost just as important as new mods, because as time progresses, all the those great mods on Doom, Quake, Half Life and other games get forgotten as newer computer gamers come into the picture.

So at the end of the day, I had conflicting views, as I wanted to run and get this great site off the ground something inside me told me to review all of the new mods that were coming out and getting alot of attention on other sites like the beloved ModDB, at the same time, I wanted to review some of the older mods i know and grew up loving, but at the same time I felt that wasn’t what “the people” wanted.

I’m going to review what I want, when i want, New, and Old.

Weather the people want it or not.

I’m looking forward to doing my next review/video and i hope you are too.

Your friend, Shawn aka Deadrawkstar.

Fall Of Nations Needs Your Help

Greetings Guys and Girls From Madiba127 Studios,
This is a Simple New Post requesting new team members, Do you think you have what it takes
Look below for positions we have open

3D Modeler and Animator:
Animator Requires 3DS Max
Can you model buildings, tanks and infantry and more, then we have a spot for you
Madiba127 Studios is looking for Modelers for Fall of Nations
Apply Via Private Messaging Madiba127

Graphic Artist:
Madiba127 Studios is looking for graphic artists for Fall of Nations, you will be tasked with
making the unit icons and more,
We will require a sample of your work
Apply Via Private Messaging Madiba127

Concept Artist:
Can You draw or model, then we are looking for more concept artists to join our team, we have
a list but no drawings to go with them, think you can help
Apply Via Private Messaging Madiba127

Note:
Fall Of Nations also Uses Skype to Chat between members, its not required but its
useful to chat with the team and give direct info to the team

Don't Forget We have our own Website, get more news and images before they get
added to ModDB, we don't add them all to ModDB
You can Post comments via facebook and like the items
Fon.madiba127studios.com

Thanks, Madiba127 and the Fall Of Nations Team

Greetings Guys and Girls From Madiba127 Studios, and welcome to the first update for fall of nations in 2012, hope this year goes well for you all

Madiba127 Studios has been working on the plan for the storyline of the mod, some of you may have already seen part of that on our special update, for those who have not then check it out on our forum, and post your suggestions, ideas and the like on there as well

So here is the first showcase of the new Gauss Cannon, Please not nothing is textured or scaled 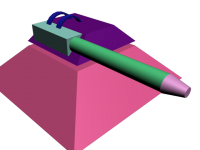 Also Here is something else we have been talking about:
Madiba127 Studios Plans on getting our own Domain Name, we have been meaning on doing this for some time, this will allow for us to give you a wiki on FoN Units, the storyline etc
But We would like your Help To Do so, by helping donate.

To Donate go to Madiba127studios.weebly.com
this website will also give you an incite to our team and what they do

Thanks, Madiba127 and the Fall Of Nations Team