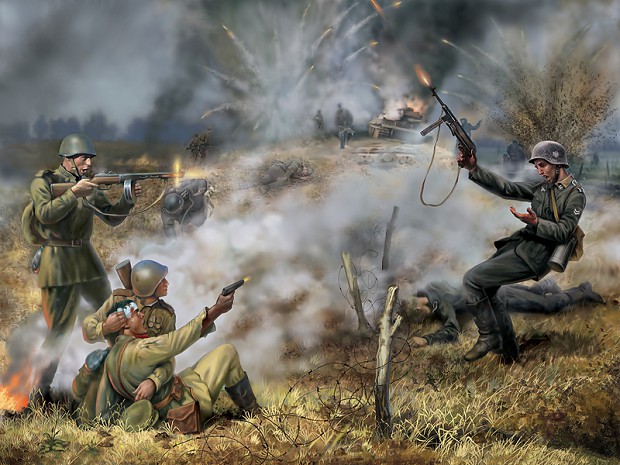 A realistic and funny game filled with active battles and active duty this is the best RTS Game in history ever made!

The story has started in June 30, 2004 with the release of the Soldier: Heroes of World War II. The game is very impressive with lot of action, nice graphic, and many historical correct units in it. It was a big success for the Best Way.

"Soldiers: Heroes of World War II is a very good game that should appeal most to hardcore strategy fans, due to its intricate, challenging gameplay and great presentation. " Bob Colayco, GameSpot, 7.9

The game get a new sequel in September 15, 2006. It was the Faces of War. New missions, better graphic, new adventures are waited for the players. Making a modification is easy for this game, because the developers are thought for the modders. 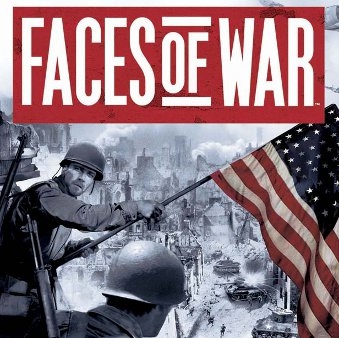 The Men of War was released in April 17, 2009.
The single player campaign takes place during World War II and features battles set in Europe, the Soviet Union, Greece, and North Africa, across three different campaigns for the Allies, Germans and Soviets. Men of War features Japan as a new multi-player faction.

Men of War features 19 single player missions spread across
three different campaigns. The game features a Soviet, German, and
Allied campaign.
The Soviet campaign spans the early battles of the Eastern front, through to the start of the Soviet counter-offensive. The campaign begins with the Battle of Rostov and ends after the Battle of Seelow Heights, with a epilogue showing Berlin days after its capture.

The German and Allied campaigns take place in the North Africa theatre. The German Afrika korps
follows a young, ambitious commander who, with each battle, slowly
becomes disillusioned with Nazi Germany as he fights in Greece (Battle of Crete), Libya (Tobruk) and Tunisia. The Allied campaign follows an elite American squad during Operation Torch as they fight alongside the British "Desert Rats" of the British 7th Armoured Division, other American soldiers, and Henri d'Astier's French Resistance.There are also a number of bonus missions, which involve both defending and attacking objectives.The single player campaigns played through cooperatively over a local TCP/IP network, or over the internet.In multiplayer, there are 5 different factions to choose from; The United States, Commonwealth forces, Germany, Soviet Union and Japan.
There are a variety of game modes including Combat, Battle Zone, Frontline and Cooperative, all of which were featured in Soldiers, and two new modes - Victory flag and Valuable Cargo.

Modifications are still officially supported, and they have their own Tab in Options. 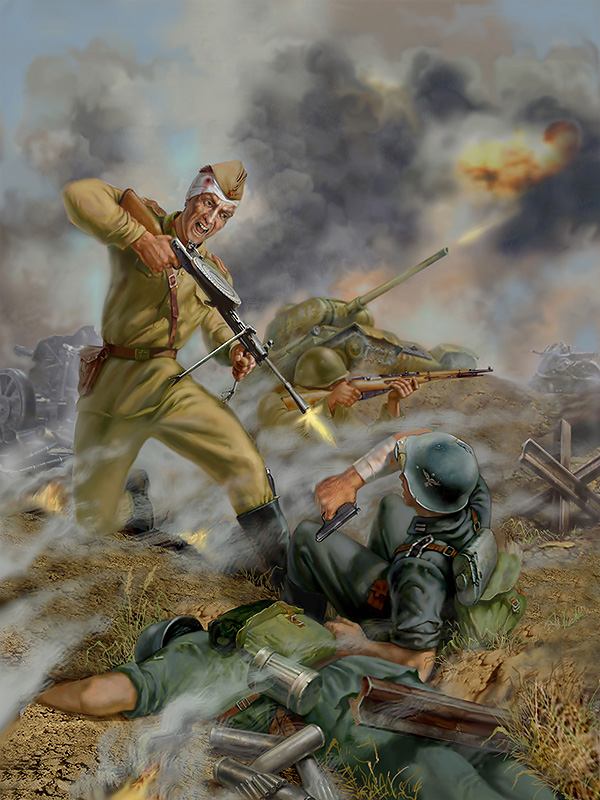 This is a standalone single player expansion for Men of War. You can play with the well known and well feared elite Russian marines, the black jackets. 22 intense mission are wait for the player. There isn't a multi-player in this game. 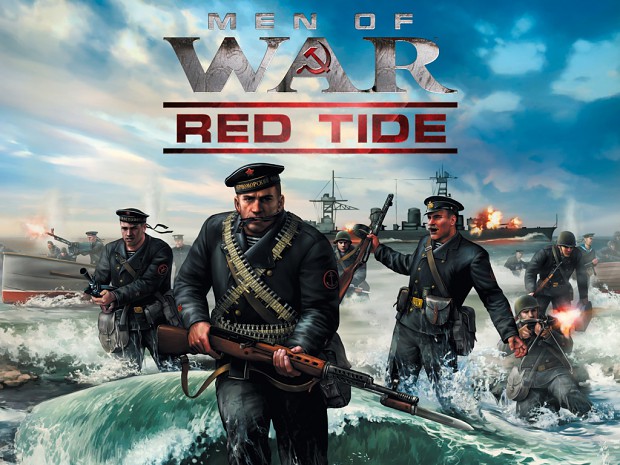 This expansion is aimed to improve the multi-player game mode, and its adds the skirmish mode to the game. It is in open beta stage yet, you can only participate in the beta, if you have Steam. 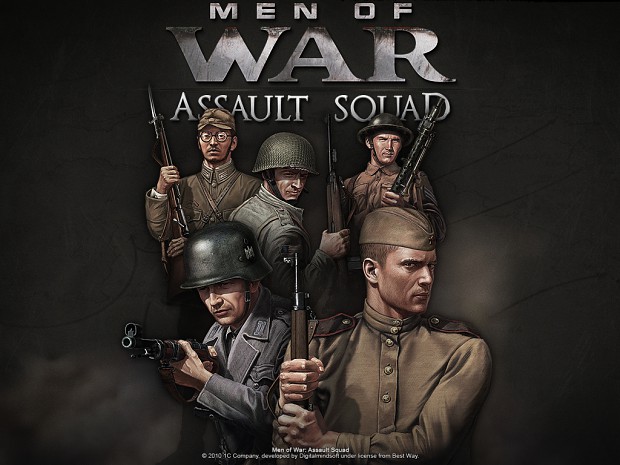 The new era of the game, it will be play in Vietnam. We don't know too much from it yet. But this game will be very good. Here is a proof. 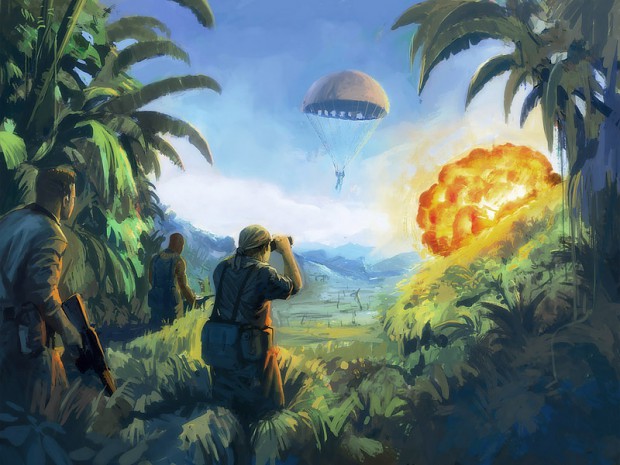 We support everybody who like to modificate the game to make more missions and more action.Check our tutorials.

So get one of the games and prepare some tin food then let's Rock'n'roll in Men of war!

Well, I got bad news

I lost the Freikorps files, but don't worry, I'm going to remake it better.

Back at It Again at Freikorps

I'm back at it again! Expect more or less updates tho.

I have a possible release date for a beta build of this mod.

Hello I had a question.Could you please tell me why assault squad 2 maps don't ever run or work on both men of war and assault squad 1?

Hey, i've been looking for a while a way to import men of war models into 3ds max, is it possible at all?

Yes, LucaThemaster, infact the models are made with 3DS Max, but I don't have 3D Max and this could be easily disproven.

I'm planning on making a mod for the original Men of War in which every single multiplayer map is a singleplayer mission. The missions must be realistic or based on real life events. I would like to name the mod "Forgotten Heroes of World War II" because in most of the missions (not all of them) the player will control a small amount of units or even only one man. The Frontline MP maps will have missions, Bazerville will have a mission, Bocage will have a mission (literally every single map). I could make the missions and the mod myself but it would take a lot of time so... if someone could help me with scripting a part of the missions please send me a private message and respond to this comment. Thank you. (Of course I'm going to work on this mod too, I'm not that type of person to put people work for me.)

I'd love to make missions for this, could you friend me and we could work on the mod?

Only true Men of War fans know that the franchise started with the release of Soldiers: Heroes of World War II in 2004...

Old boys where you at?

New patch for Entwicklung! Feel free to leave comments or critiques. Take note of the description notes on the download page!

Is it possible to merely copy MDL files from newer MoW models and paste them over the older MoW models? I'm just trying to find an easy way to make the original MoW models to look better.