DoomDb is a group in Moddb where you can share all the best kinds of Doom WADs out there! Join our sharing and recommendation society, read the rules.. and have fun.

Replaces items and enemies with "dark" versions, creepy monsters from the void dimension rather than hell. Soon there's going to be Gothic Chapter (which replaces environments with gothic ones, as well as the weapons), so in anticipation the arbitrary changes to the weapons in this mod has been removed. The monsters are more dangerous, move faster, faster projectiles, homing projectiles for the Death Imp, Imps/caco attack more often, complete sound revamp, Baron of Hell and Archvile are taller and enemy melee attacks do more damage. I've now included a separate "Gothic Nightmare" addon for more variety of Lost Souls & Pain Elementals, with a Dark theme and made the bosses, Spectres, Mancubus, PainElemental more challenging. Baron of Hell is more challenging and there is now a variety of zombies in the optional addon. Added Ghosts & mini-bosses in the Gothic Nightmare addon, zombiePLUS mutator (9 new zombies) and provided ways to disable various optional creatures or to replace zombies.

Gothic Nightmare addon v1.37g
Standardised damage so that its capped at maximum of x3. This should remove alot of the RNG from the game that sometimes causes quick deaths. Added Soul Harvester and Hades Elemental.

Gothic Nightmare addon v1.37f
Reduced health of some of the monsters, like Fallen, Drones, Aracnorb, Satyr, Warlord. Reduced health of Quadshotgunguy and KarasawaGuy zombie, reduced chance of chainsaw zombie spawning by alot, hes rare now, prevented rocketzombie, devastator and BFG zombies from spawning (i.e. zombiePLUS) since they where far too powerful. The Warlord imp doesn't go invulnerable anymore, he simply raises his shield (this was an issue).

Hotfix- Added a mutator to replace zombies with imps for Gothic Nightmare only.

The addon is optional but adds many creatures including, 8 more zombies, variants for Imp, Baron, Caco and for Mancubus, various Lost Souls and Pain Elementals, Ghosts (that are semi-common for low level monsters like imps/beasts) & mini-bosses (rare spawns for Baron, Spectre, Mancubus, Archvile). All spawns can be tailored to your taste with the mutators.

Thanks to Sergeant Mark IV for the ideas for the greater enemy difficulty, and the code for the melee attacks that the Caco, Demons & Death Imp utilize, infrared code and Spectre eyes. Also thanks to Sgt Mark IV for the Bolognese Gore Mod. Thanks to Realm667 for hosting the custom nightmare creatures (Lost Souls, Pain Elementals, Barons, Ghosts, ShadowBeast) and thanks to Vader & Woolie Wool for most of the zombies and for the Wraith, Agaures, Vore, Aracnorb, Swarm and three of the ghosts, the Blot, Shadow & Nightshade (featured in TheRefinery) and thanks to Aerial for the Shadowvile (featured in Hard Doom). Paul Schneider for the Chainsaw Zombie (Unloved) and ZombieRocketGuy from Ultimate Torment & Torture (with shotgun zombie color by Pa1nki113r), PlasmaZombie is by Bouncy (edited by Pa1nki113r) and QuadShotgunZombie reload sprites by Pa1nki113r. 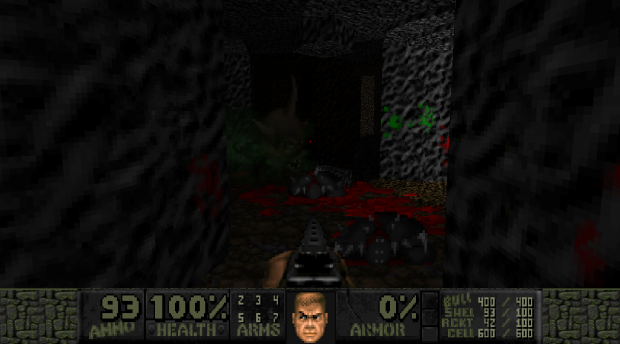 Excuse me sir your mod is overwhelmingly amazing but do you think theres a dark theme sprite for the revenant? Because I kind of dont like the new revenant dark sprite for it, it looks a lot like the dark imp...

There are a few dark versions of the Revenant, but none of them felt different enough to fit into the mod, the whole "futuristic" aspect of the missile launcher and everything. Plus [DMG]Heretic started the vanilla replacements with the DeathImp so I want to honor it by keeping it that way. I think I remember seeing some dark variants of the Revenant in Herculine's Doom Upgrade. Don't forget to rate :)

oh well it's your mod and I understand sir, rate:9

Oh yea, and I am actually interested by the the type blood sprites you made, meaning when shooting a monster the a lot of blood comes out, more like droplets, it actually sticks with the original baron of hell blood too!is there anyway you can make it seperate? cause I'd sure love to try it with other wads

and sound effects too

Well, in a overall this is good, consistent theme.

The only issues i see with the monsters is:

Baron having red plasma glowing from his hands and he throws green fireballs at you.

Spider Mastermind stuck in the last explosion frame, making literally a static fire floating, this is weird to see, lol.

BTW, Death Incarnate from R667 would fit nice for a Revenant replacement on this.

Hes actually a rare spawn for the Mancubus, mini-boss that is automatically enabled when using the addon. The mutator for it disables mini-bosses. Thanks for the critique :)

I remember the Incarnate, how the hell do you truly defeat him?

Well before it just meant killing him many times until he finally stops getting up. I've modified it so that there is a lower chance of him resurrecting if you kill him before he gets into his "Death Incarnate" state which happens when he's been in his pain state to many times (basically after he gets so many 'black counters' upon being injured, he becomes semi-transparent, more powerful attacks & summoning ghosts/souls from the void), The best way is to use weapons that do the most amount of damage per shot (RPG or BFG).

I'm playing this mod with Brutal Doom and Project Brutality. Any way to upgrade or patch the mod to use BD blood, gore, limbs, bullet tracers and special effects?

Lastly, anyway to make these monsters as an ADDON to BD/PB monsters, instead of replacing them? Some of these are just incredible and would complement those two mods as well.

They wouldn't have the gorey deaths though, since that requires a fair bit of sprite work. So it wouldn't look anywhere near as good if you mixed spawns from my mod with Brutal Doom or PB enemies, the easiest way is to just use a lighter version of Brutal Doom like the Ketchup mod which works with everything in order to get better blood/gibs into Dark Doom Creatures. At the moment this mod only has a old version of Nash Gore which is enough for me.

the comp wads not work?

I love how you added Snail Bullets and all these mutators with Dark Doom Creatures, great job!