Fight your way through the streets of a zombie infested city to save the survivors of a disastrous chemical accident that changed most of the city's population into mindless brain hungry monsters. Time is the enemy and your car is a weapon as you race through the streets smashing everything on your way including fences, phone booths, street lamps and hordes of zombies. If you get tired of rescuing people, take part in the Blood Race tournament. Chase other cars and take them down without mercy on special racing tracks populated with the zombie horde. Earn loads of cash while you progress through the events, unlock new rides and purchase weapons of mass destruction to become the ultimate Blood Race leaderboard champion. If the car chases and speed runs are not your thing, jump into the Slaugher mode where your objective is to survive as long as possible while ramping up enormous kill combos and annihilating endless waves of zombies on specialy crafted arenas.

Finally the Blood Race is here and available to all players as a free update! The expansion provides a unique gameplay style based on classic, old school, top-down, racing games with a flavor of next-gen, dense action. Blood Race offers the chance to chase other cars and annihilate them without mercy on special racing tracks populated with the zombie horde. Winning events earns loads of cash and the ability to obtain new rides and purchase weapons of zombie mass destruction to become the ultimate leader board champion. 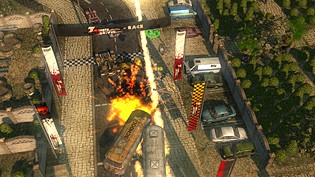 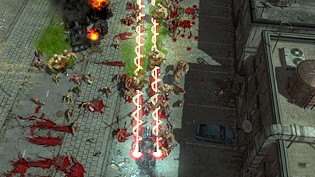 For all those that didn't have a chance to purchase Zombie Driver yet, we have a limited time, 50% off, price promotion!
This update was possible thanks to your input and interest in Zombie Driver for which we thank you all! With the latest update the game is at least three times bigger in terms of content and gameplay diversity than the first version released last year. Below you can watch the trailer summarising the whole game and giving a glimpse of the action:

Please let us know what you think about the update on the game forums.

After several months of work we are proud to announce a short video showcasing the ingame mayhem that is coming with the second free expansion for Zombie...

We have been recently experimenting with a new way of viewing Steam Leaderboards. As a result we have just launched a beta Facebook application that collects...

The Slaughter Update and 50/50 Deal

The "Slaughter" update is now almost ready and will be coming early next week. We haven't posted any new media in some time so we prepared a few screenshots...

This game looks like fun! Bashing up zombies with cars? Awesome! However...A horror game? I'm not so sure I would go so far as to consider it that. Horror games are supposed to be scary...this does NOT look scary. At all. And that's my only complaint. Keep up the good work!

Just hitting zombies with a car has never been so fun :3

Great game, but I have one regret: you cannot chose the level you want amonst those that you cleared. If you want to do a previous level again, you have to start a new game, and it is dissuasive.

Some of the most fun I've had in a driving game in a long long time.

You guys should consider about adding multiplayer, it might attract more people.

What's the changelog for today's update on Steam?

I see you're using OGRE...any chance of a Linux port?

We aren't planning a Linux release at the moment. However we want to release a Mac version at some point. If it turns out that there isn't much work to create a Linux build from there, we might check that out.

Darn. I really want to play this.

many people who run linux forced to use wine to launch it. if you not planning to port this to linux, can please do consider for the next game.nowadays many engine give this opertuinity easilly with no hard work by the developers and if you make this in your planes from begining it maybe hard for first time, but hey look the good side you will have all your games mulit-platform, and linux is very interesting platform nowadays, only blind people who cant see that.
my regards i love the game

Nice but only to play 15 minutes from while to while. In bigger doses it become very boring.