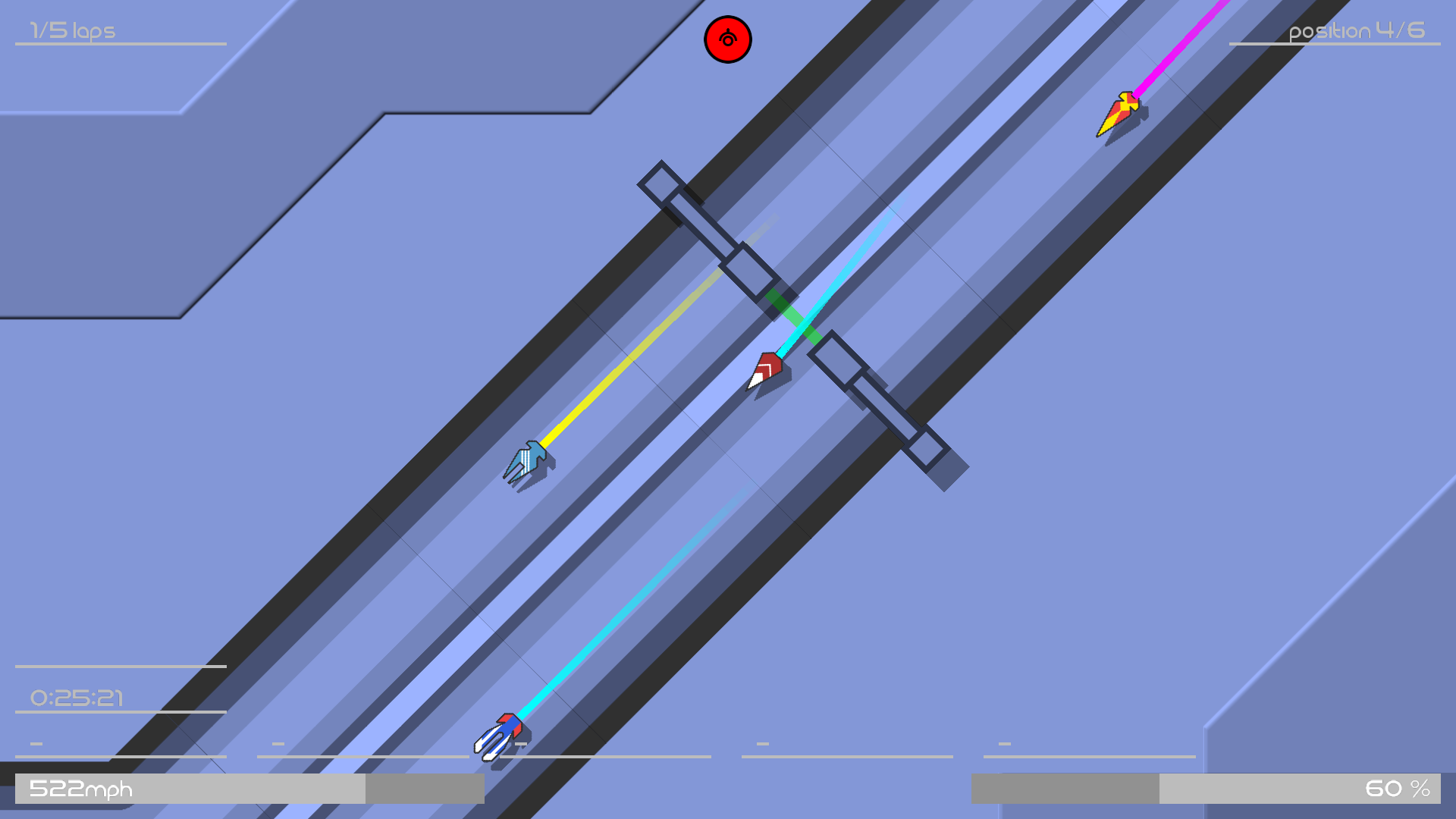 _speed_ is an adrenaline fuelled top down racing game set in 2100, the turn of the century where the worlds first anti gravity racing league is taking place. Pilots are put in state of the art crafts in which they race against each other or the clock using various weapons and power-ups all at over 400MPH.

Upon release _speed_ will have an arcade mode and career mode. Arcade mode will contain every track, craft and feature unlocked from the start, here you can practice your skills or compete for online and personal records. In addition to this _speed_ will also ship with a career mode where you will participate in race events from around the world to further unlock events and points to upgrade your craft.

_speed_ is currently in alpha and because of this not all the planned content is in the game yet, upon release I would like to have the following modes and features in!

I am getting close to having all of the game modes into the game, at the moment there is standard race, time trial, head to head and endurance apart from this all I need to implement is eliminator mode and design a lot more tracks as I currently have three. All six power-ups are currently in the game and working along with arcade mode._speed_ contains 12 countries that each have their own unique craft with different statistics. 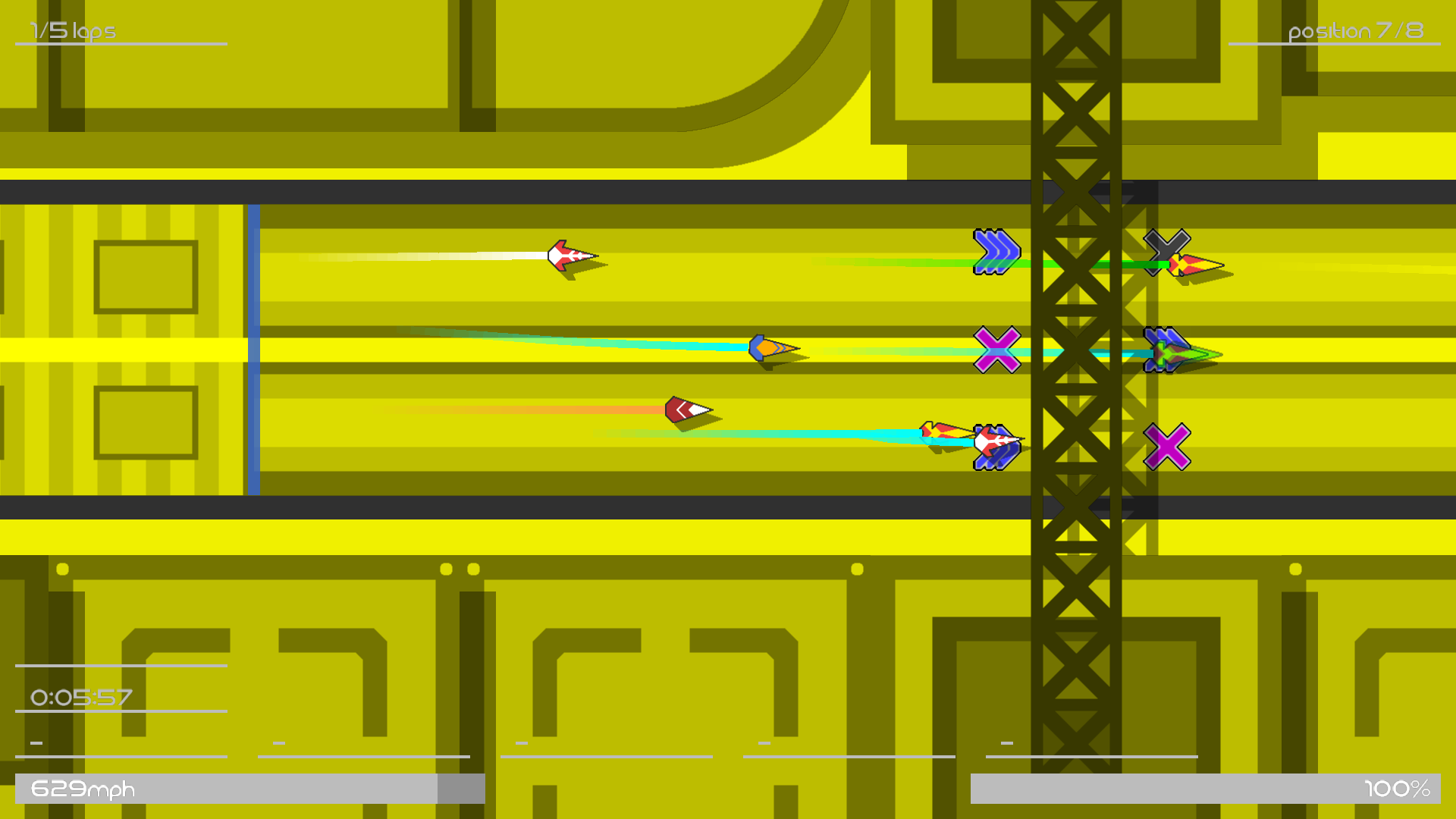 Arcade:
Everything will be unlocked, all tracks, crafts, craft variants, mode etc will all be available to play. What you do in arcade mode will not effect Career mode.

Career Mode:
Career mode will set you up with a map of the world with countries and continents offering multiple race events for you to earn commendations which can be used during your career. The use of commendations is yet to be decided.

Power-Ups
- Leach Beam = Attaches onto enemy craft for a short while draining their shield and adding it to yours.
- Missile = Fire at a enenmy craft and it will guide it's self to the target and explode.
- Rocket = Dumb fire three rockets in a spread pattern which explode on contact.
- Mines = Lay down three mines behind your craft for an unsuspecting opponant.
- Shield = temporarily protect your self from enemy fire and collision damage.
- Boost = Give your self a sudden speed boost to charge ahead of the crowd

To start with I've decided to ditch the country team system and start designing my own teams, I've started to make some mock up banners for them.

I also have some new music by TheConzio, there are two new in game music tracks and one new menu track.

For some reason when I started _speed_ over a year ago I decided to have everything done in 720p and upscale it to 1080p. It must have never occurred to me to downscale it instead :/ So I’ve decided to switch over to 1080p since some of the text was a bit blurry on the menus and HUD. Thankfully this is relatively easy as the HUD already scales depending on the view port and the menus just need their buttons stretched out a bit. What will this mean for you? Nothing really but some text on the menus should be much crisper now.

I’m also going to be doing some optimisations when it comes to drawing the circuits. At the moment all buildings you see are individual objects and are drawing shadows constantly and the massive background (greater than 10000×10000 pixels in some cases) are being drawn constantly even when not needed. To resolve this I have a few ideas.

Static buildings will be built into the backgrounds along with the shadows, this way each building isn’t a separate object executing drawing calls every step. Secondly the backgrounds will be split into smaller pieces which when out of view will not be draw. This should significantly decrease the GPU workload for drawing calls.

I’ve also submitted _speed_ into the IDG (Indie Dev Grant) which for those who don’t know is part of the bundle in a box event, for every 100 bundles sold $15 is added to the fund. I will make a new blog post once the bundle is up and I’ll explain how you can vote! Bundle-in-a-box.com

As part of the IDG I put up a new video showing some game play for my submission.

Also check out the image gallery I've uploaded some new images! One final note, the gameplay update is almost complete so next up is the visual and menu update meaning lots of fancy effects, shaders, and particles. Yay!

About a year ago I started working on _speed_ and I'd like to thank everyone who's helped.

All 10 new weapons are in the game and working! I just need to do a bit of bug fixing and polish to them first then I'll start working on the weapons...

I have decided to create a plan which involves splitting the development into significant chunks of work.

'ello, 'ello, 'ello. What 'ave we got here then? I was supposed to be adding lots of new sounds and audio options but instead I essentially re created...

At last a new build! So, whats changed since the last build? Pretty much everything so I’m not going to writing up a full change log from version 8...

All the new features added over the last few weeks have come together to be showcased in this latest build.

After a weeks delay due to rendering issues the next version is released.

This week see's the addition of the third race mode and the mode's exclusive craft.

Lots have been added this week and I’m extremely pleased with the progress being made. Also I’m happy to be able to release a new build of all the...

Kicking off the new year with a new alpha release. this was originally released early January but I've only gotten around to adding it here now, sorry...

Is this project cancelled?

I ask the same here as on your latest dev-log video:

From where do you get this great music? Is it self-made?

Sorry for the late response (I need to check the comments more often) all music was made by CoLD SToRAGE (https://coldstorage.bandcamp.com/)

The tracks in the game come from the albums Android Child, Melt and CoLD SToRAGE HD

omg ...just right now do I remember who cold storage was and is.
Wow. just too cool.

These will be added in the next version, but I'm not sure about diagonals. It would probably require a complete overhaul because at the moment I'm using a fake 3d effect.

I've put development on hold until mid June due to my final GCSE exams.

Hello, I played your Alpha version 0.3.1! I can say that I love this game! And the new update that you are working on is going to make it even more amazing! I can't wait to see what you make out of this game! I did a little gameplay of it! I hope you watch it! :)