Zeitgeist. A single player project set in the futuristic 1930s of an alternate history. Find the masterminds behind a bombing attack, and dive into a world of devastation, science, secret societies and intrigues.

“... for the wise man looks into space and he knows there is no limited dimensions.” - Lao Tzu 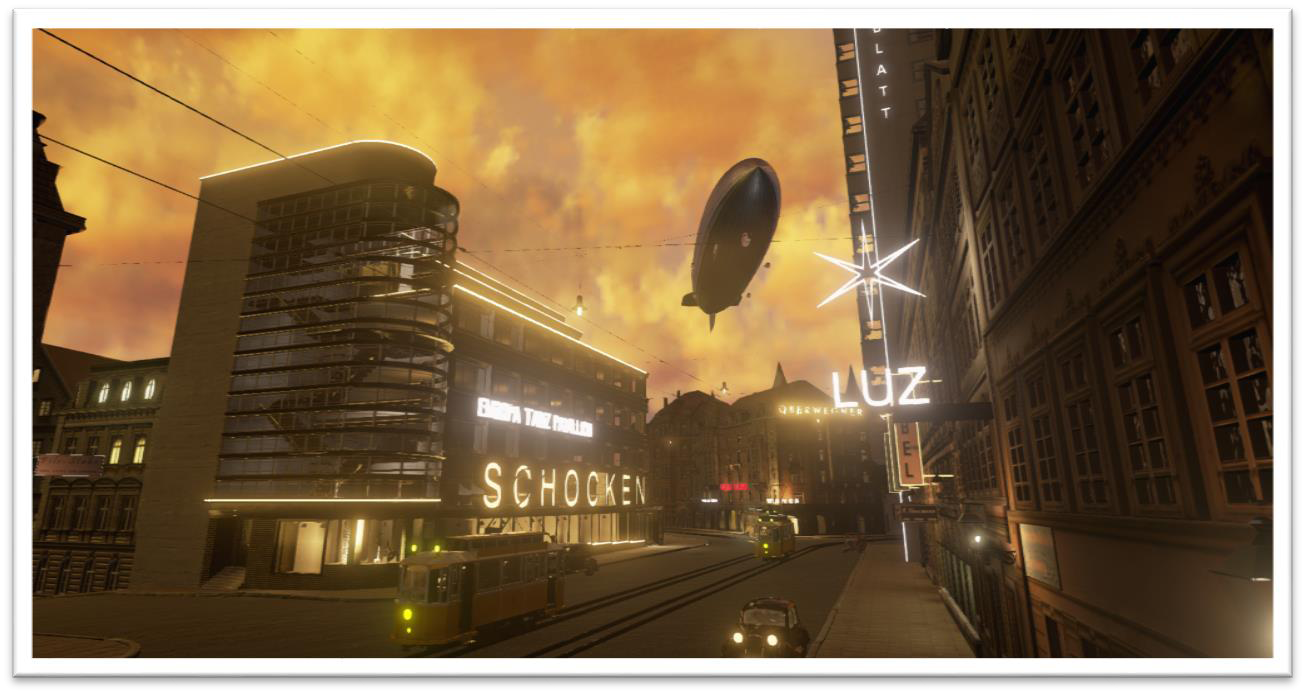 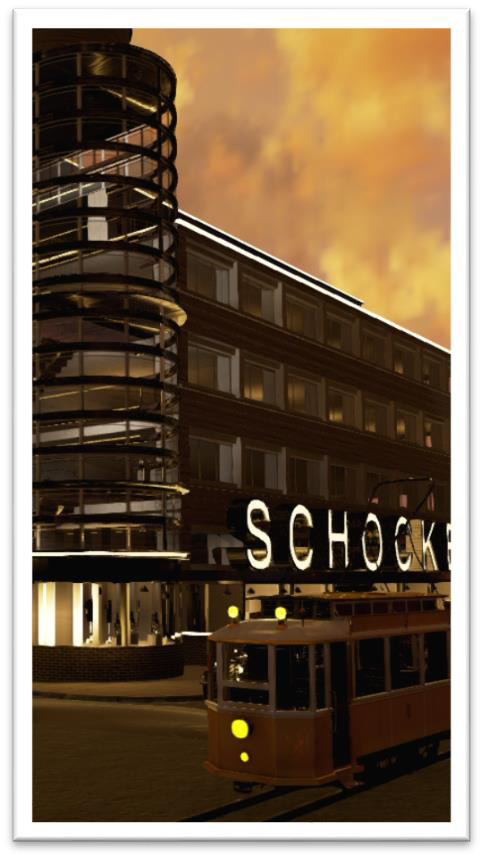 After our announced time-off in January, we spent the past six weeks converting one of our favorite scenarios for UE4 – the „Stuttgart“-Scene, which mixes Art Déco / Bauhaus with centuries-old architecture, neon lights with gas lamps and old fashioned trams with streamline cars.
This was a huge step for us, because it meant many things at the same time:
- Our workflow for UE4 is now pretty much optimized.
- We’ve got our own infrastructure back – using a „perforce“ system to synchronize our work in UE4 with an integrated file management software
- Thanks to trueSKY, the skybox you’re seeing isn’t just a static image. In fact, it’s a dynamic sky system allowing us, if we want that, to create day and night cycles and all sorts of fancy effects, including clouds, precipication, lighting, fog and so on.
-
- We’ve begun to implement both a layer-based vertex paint system to create diverse and non-repetitive materials
- And we’ve figured out how to properly use decals in Unreal Engine 4.
- Also, it meant that we could experiment a little bit with driveable vehicles, but more on that later (and in a separate IndieDB-article).

Another probably quite interesting thing is the fact that we finally found the courage to pick up our design document after many, many years, and update it with the latest information on Zeitgeist. We will try to put a version for the public online soon. 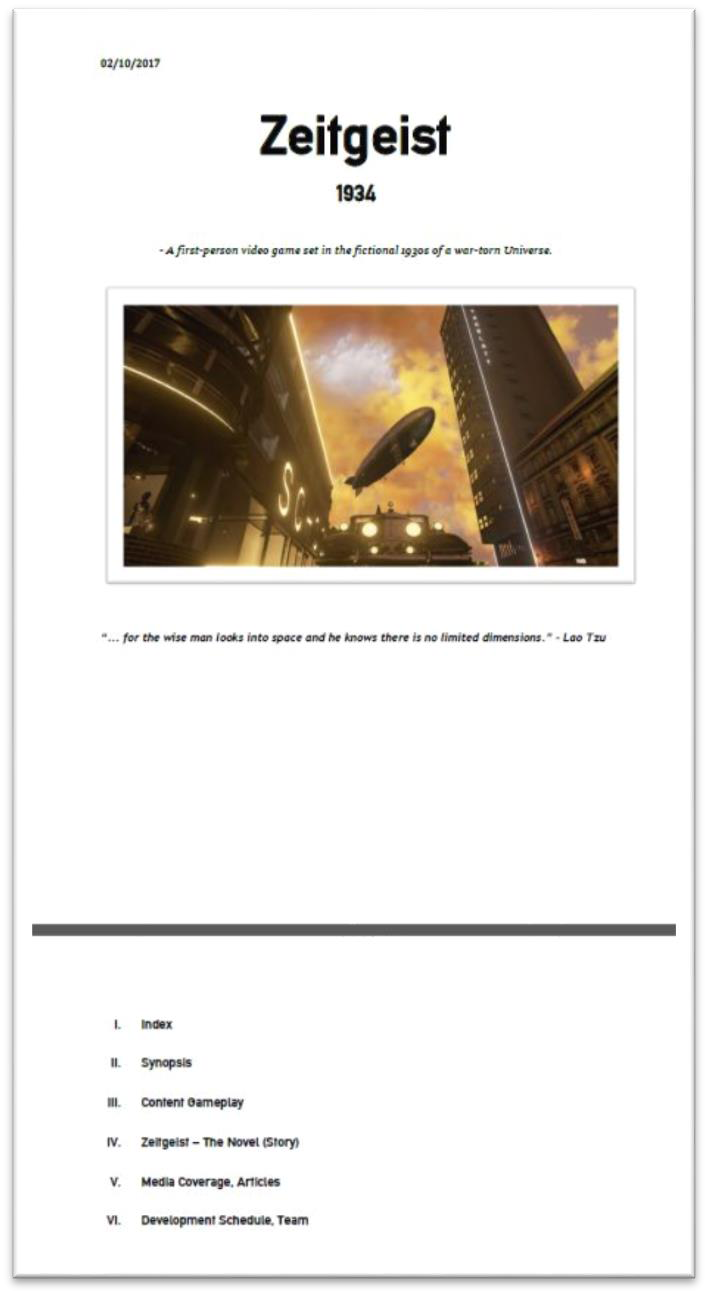 The “Stuttgart” scene is featuring both the „Tagblatt-Turm“, an early highrise building from 1928, and the „Schocken“ department store (which actually survived the second world war - only to be torn down in 1960…) 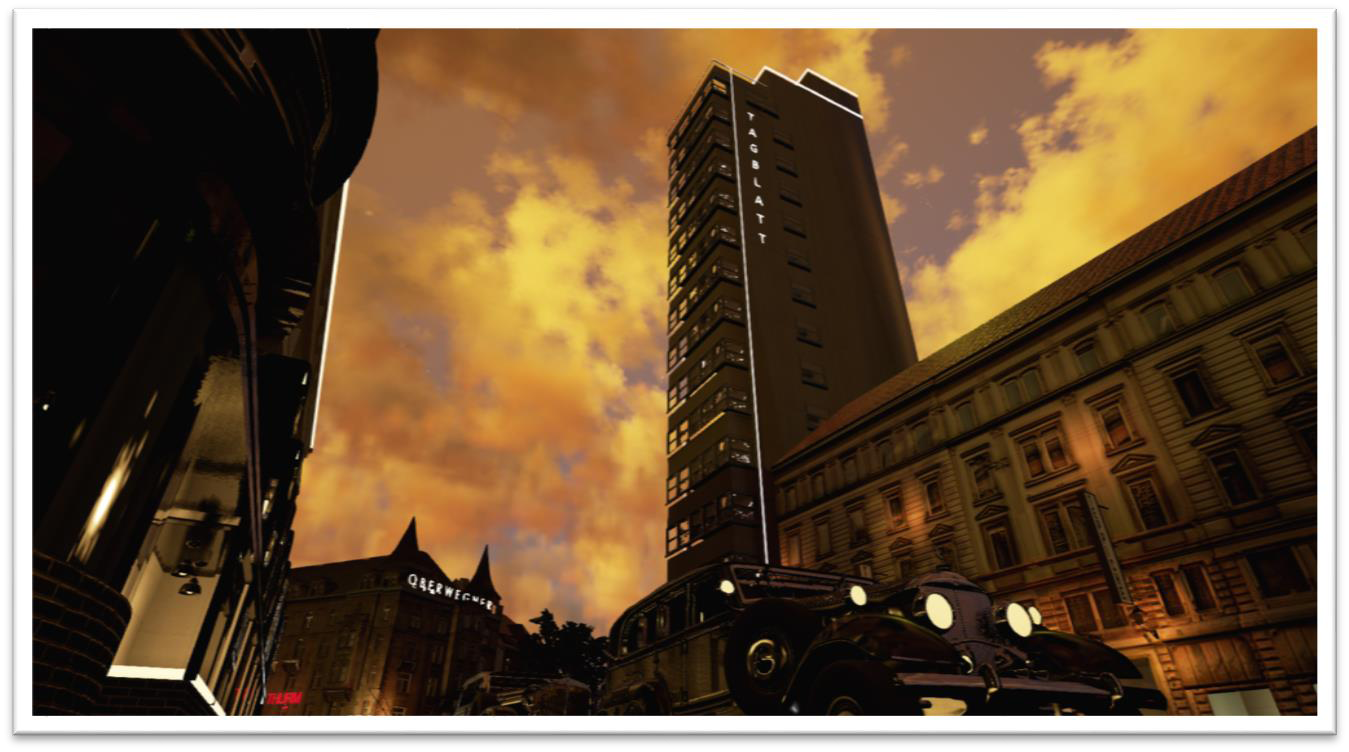 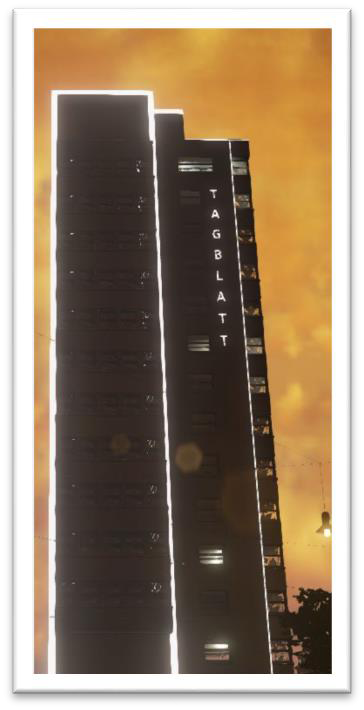 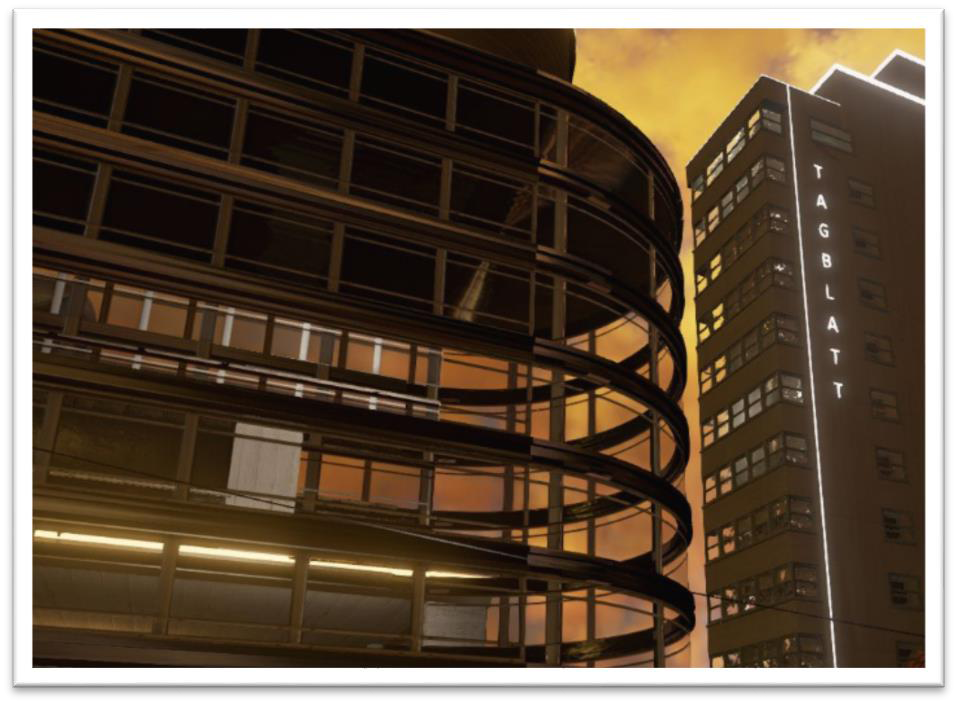 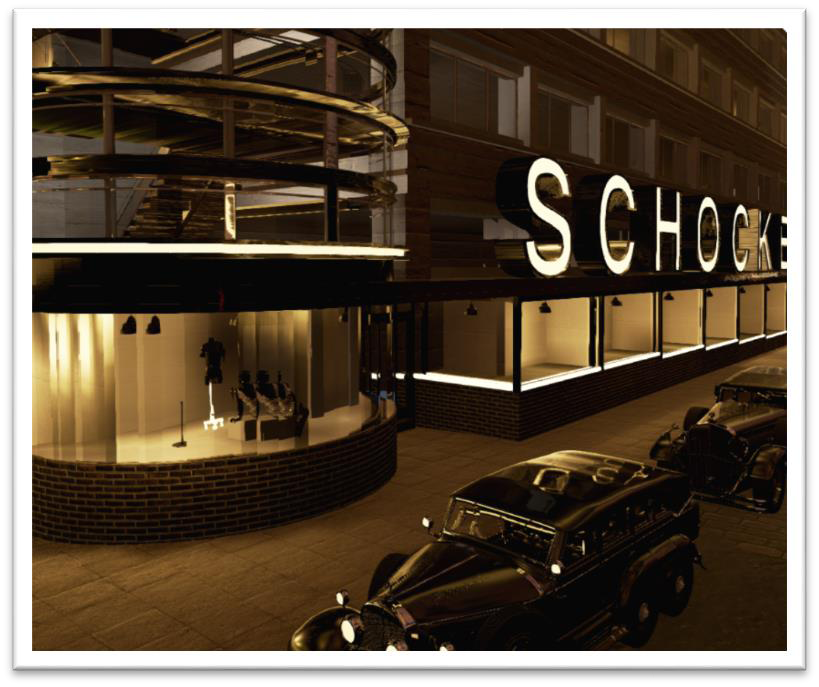 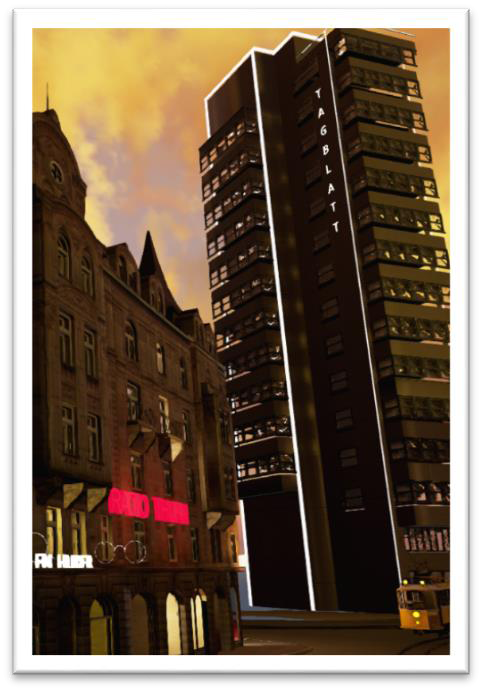 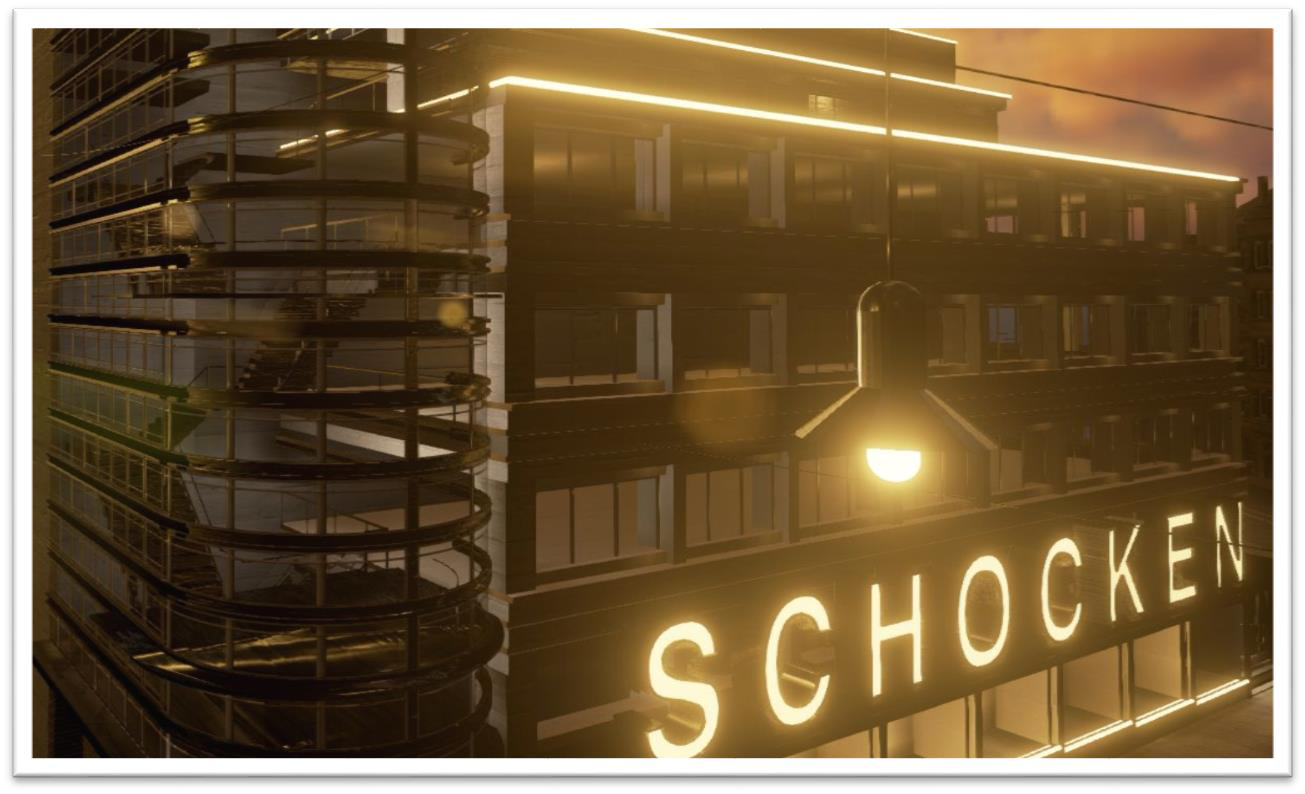 We hope that these screenshots did bring some tiny smiles to your faces – they certainly did for us, and we’re very much looking forward to the next articles which will feature some more „behind the scenes“ material and, probably, a tutorial explaining the Maya to UE4 pipeline.

So, this was 2016. Oh, and so this is a presskit? We've been busy for you once again, preparing what might be our last update for this year. Check it...

News. Including: screenshots about Zeitgeist, a movie, some hints and goodies - and some insight into a Zeitgeist Artist’s work of a week.

News about our progress, our artwork, the conversion to UE4, our Road To The Future and our decision to follow through and develop Zeitgeist as a real...

Update #2 for the all new, all UE4 "Zeitgeist". Including a tiny bit of video footage, our first ever UE4 screenshots and some background info on the...

This is the prologue of the first volume of the Zeitgeist 1934 novels. Feedback welcome! There are no spoilers hidden in the prologue. The first chapters...

A new set of noir wallpapers, taken from the British Museum and showing some Art Deco buildings and Westminster Palace.

Zeitgeist related pictures you can put onto your mobile / cell phones and use as background images.

Hope they haven't given up. This looks awesome

what a shame... the mod looks really cool

Kinda wondered what happened to this community... It kinda just vanished along with the mod devs

Yea sadly, sometimes life plans don't work out. They can still come back at some point tho, its only been like 2 and half years since the last article.

Why is it listed as an Unreal mod? What happened to Source?

EDIT: Nvm, I seen the article, but you should list it as an indie game instead of an Unreal Gold mod. That means, you might have to create a new page if you have not already.

working on that. Basically, it's an Indie-title, but we're running it on UE4 in the future... at a bit of a loss as to why there's no UE4 entry in the ModDB dropdown menu. :/

> why there's no UE4 entry in the ModDB dropdown menu

Because there is no OFFCIAL Unreal Tournament 4 nor Unreal 4.

You may have to recreate a new page for it on IndieDB actually. That's what I did with my project, when I was transitioning it from a mod to an indie.

I really love all of the music associated with Zeitgeist that's been released, both the Overture and Czerny's Theme as well as the music used for the 2012 trailer. Is there any chance that you could give us an mp3 file of the song from the trailer? Also, is there any music that might not be used in the final game but still exists? (Because if so, I as well as many other people I imagine would love to see it released!)

I've combed through my HDD for the mp3 but can't find it, sorry. If I stumble upon it I'll get back to you.
There's about an hour of experimental and as of yet unused material. A lot of that will probably be incorporated into the final soundtrack.

Thanks for looking nonetheless! Your work is spectacular, can't wait for the final soundtrack!