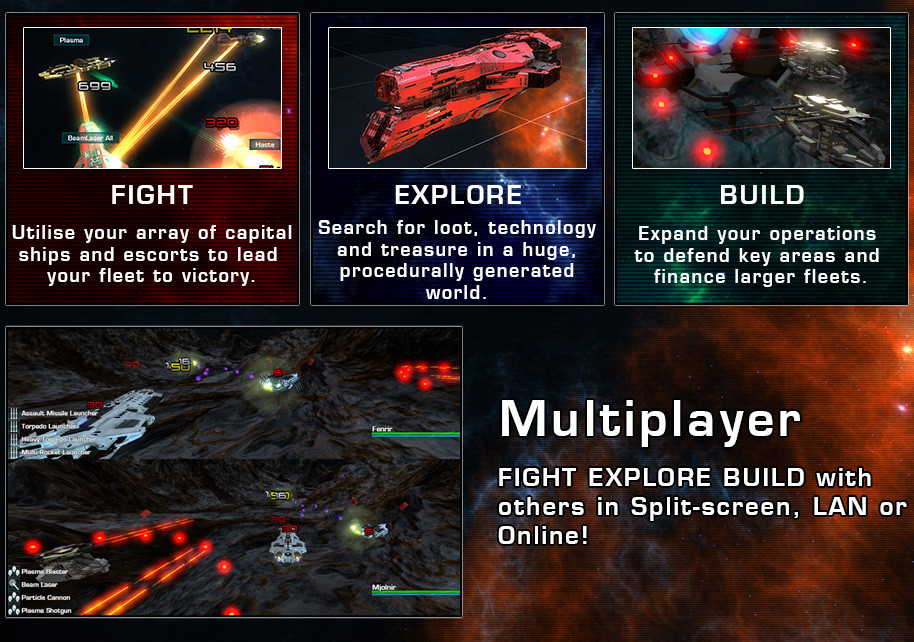 News - Frontier
Since our last update Frontier has continued to evolve and improve! 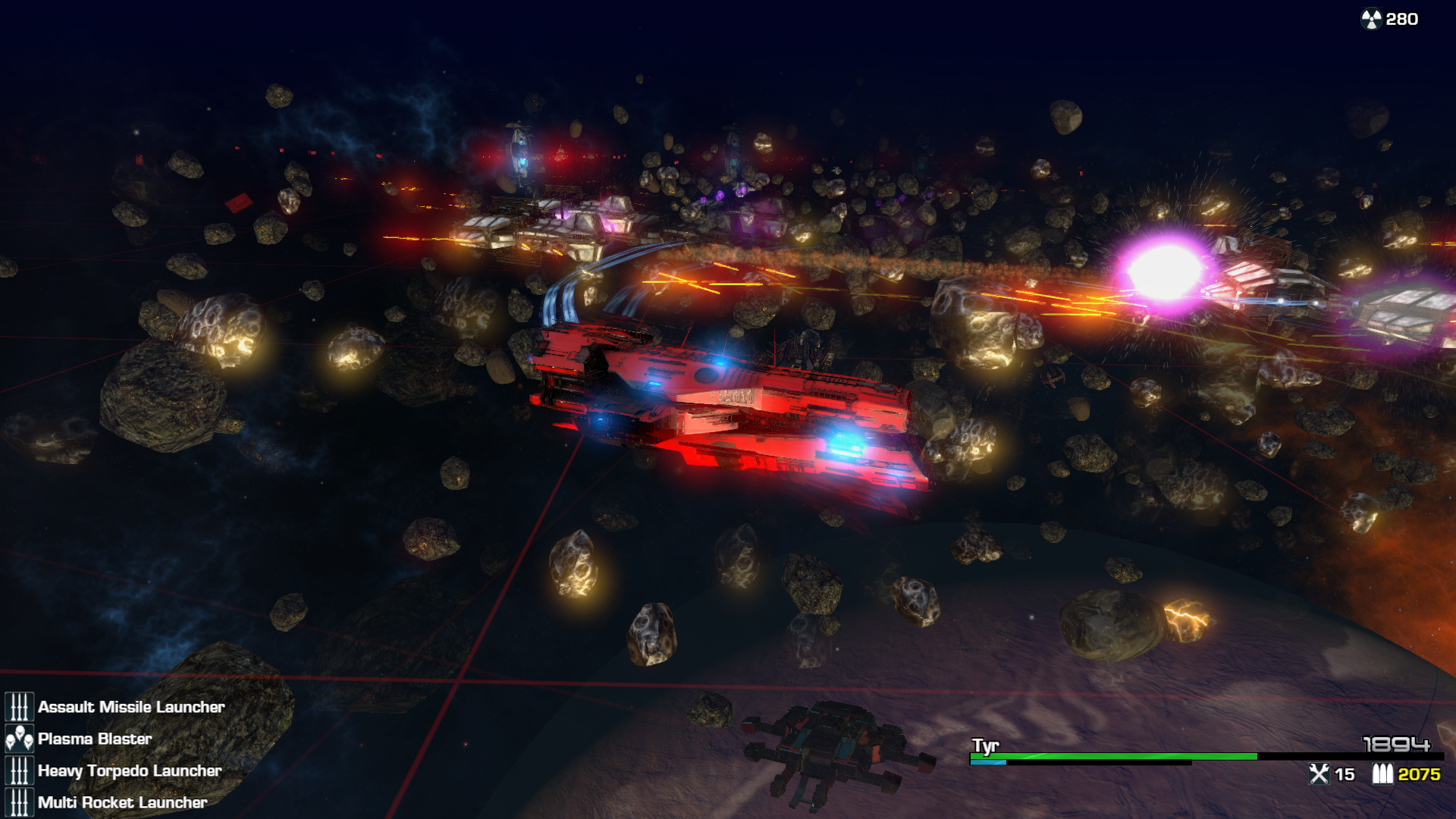 Combat has been upgraded to a real time system that when finished, will balance the tactical feel of the old combat system with the faster-pace and more immersive feel of real-time play.

Our current build is focusing on getting weapons and manual ship controls to be smooth, intuitive and most of all fun, as a result the screenshots only show a single ship, however the fleet is still there! and it's been expanded! 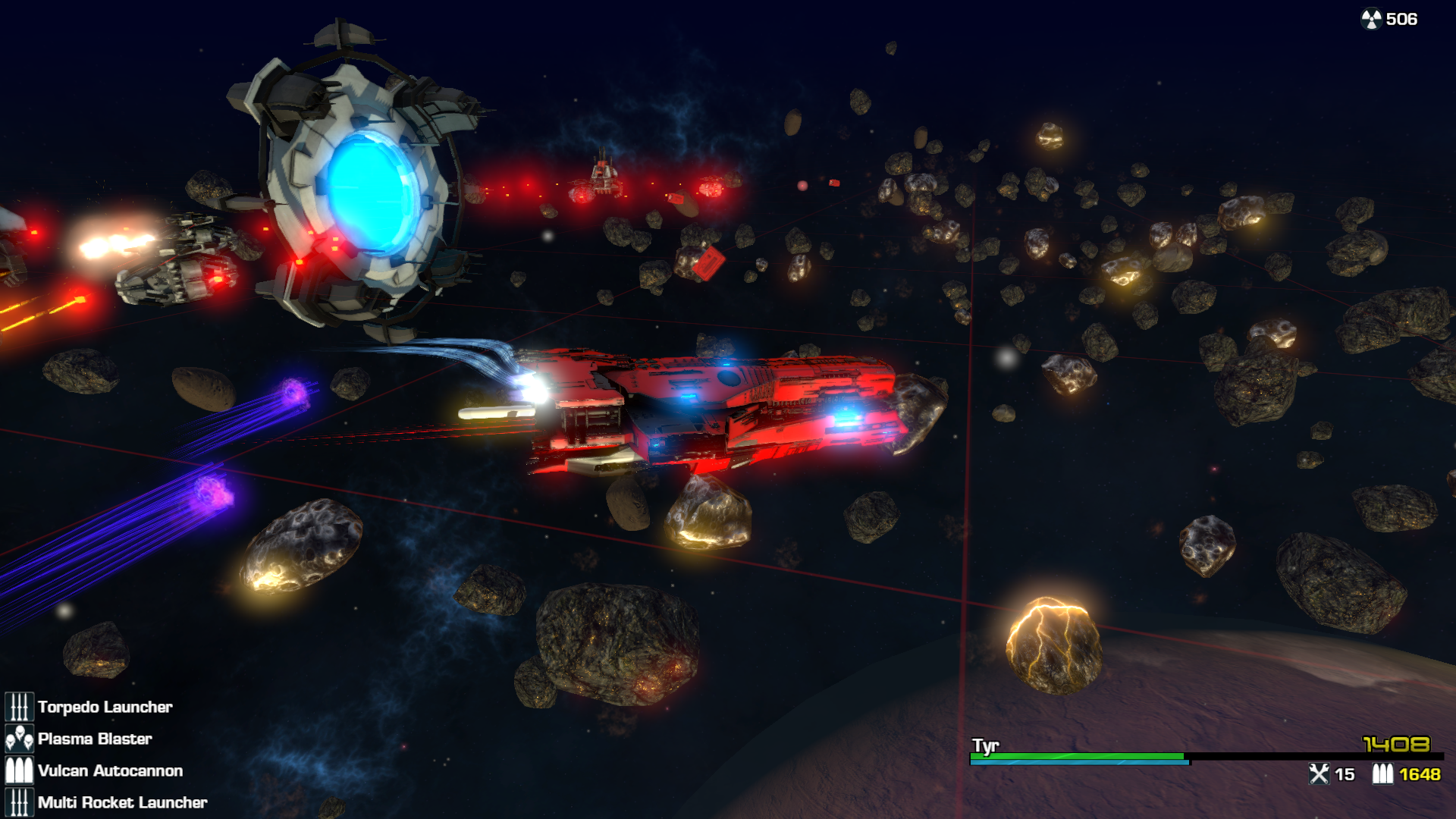 Weapons now function based on their type, the average capital ship has 10 weapons systems:
3 x Forward Batteries: Large, powerful weapons that are fixed at the front of the ship, unfortunately due to their size they are unable to be guided and as a result require you to point the nose of your ship at the target you want destroyed!
3 x Turrets: These turrets are smaller and less powerful than their forward counterparts, however they are extremely versatile, capable of using both guided and "dumb" weapons and firing in any direction!
3 x Guided Turrets: These weapons are designed for long-range smart bombardment, they either lock onto their targets or specify areas to bombard, they are very powerful but extremely resource hungry. 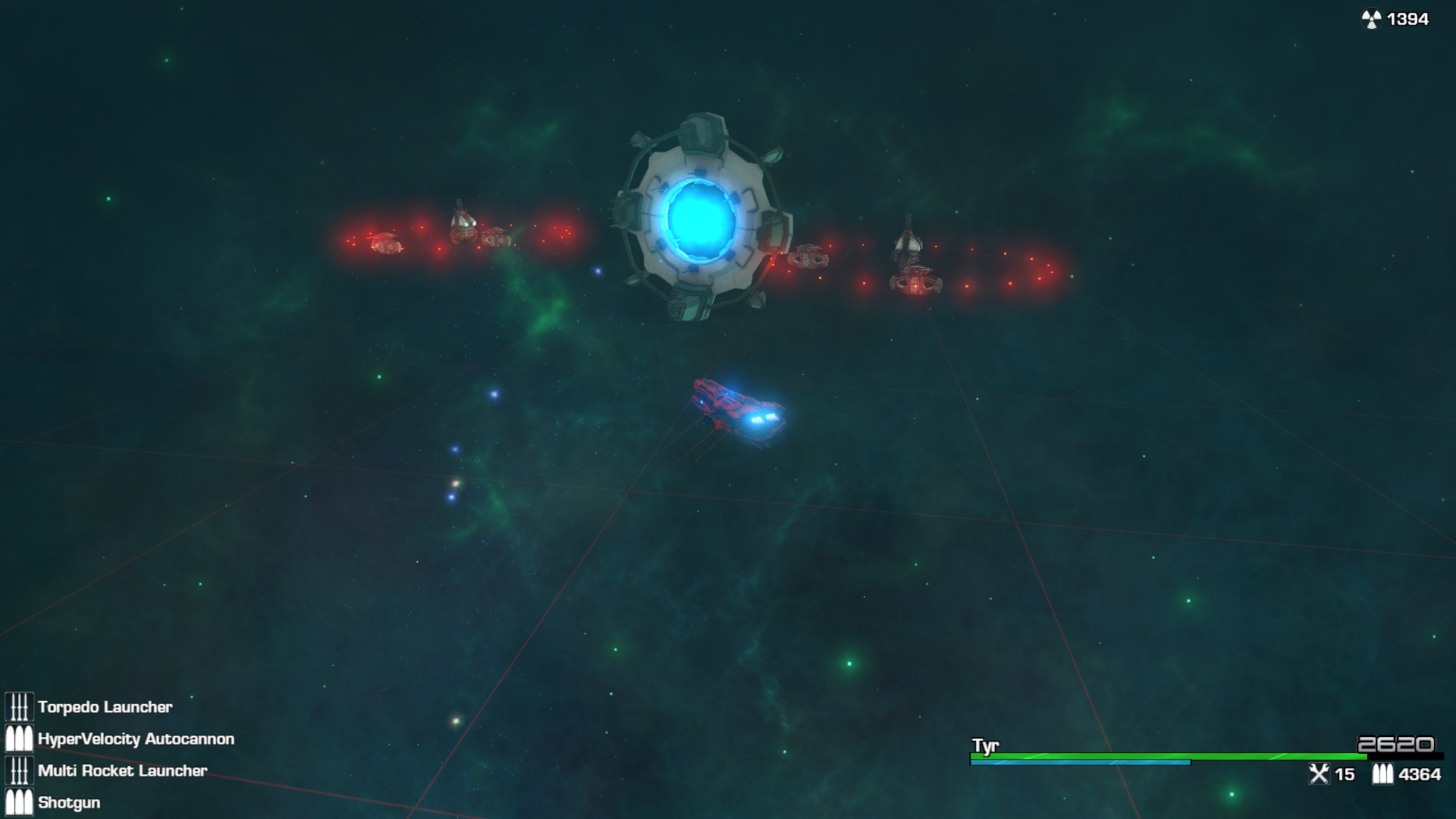 As before, you manually control a single ship (via mouse and keyboard OR Gamepad!), while the others present in your fleet act according to custom AI profiles you have applied to them, however unlike before you can now switch between any of your 4-8 capital ships at the touch of a button. As well as your gigantic capital ships the new "Escort" class and "Support" class.
The Escort class are smaller, primarily defensive vessels that provide fire support and cover to your capitals, they come in a variety of types from the gun-toting Destroyer, to the fighter-spewing Escort Carriers. 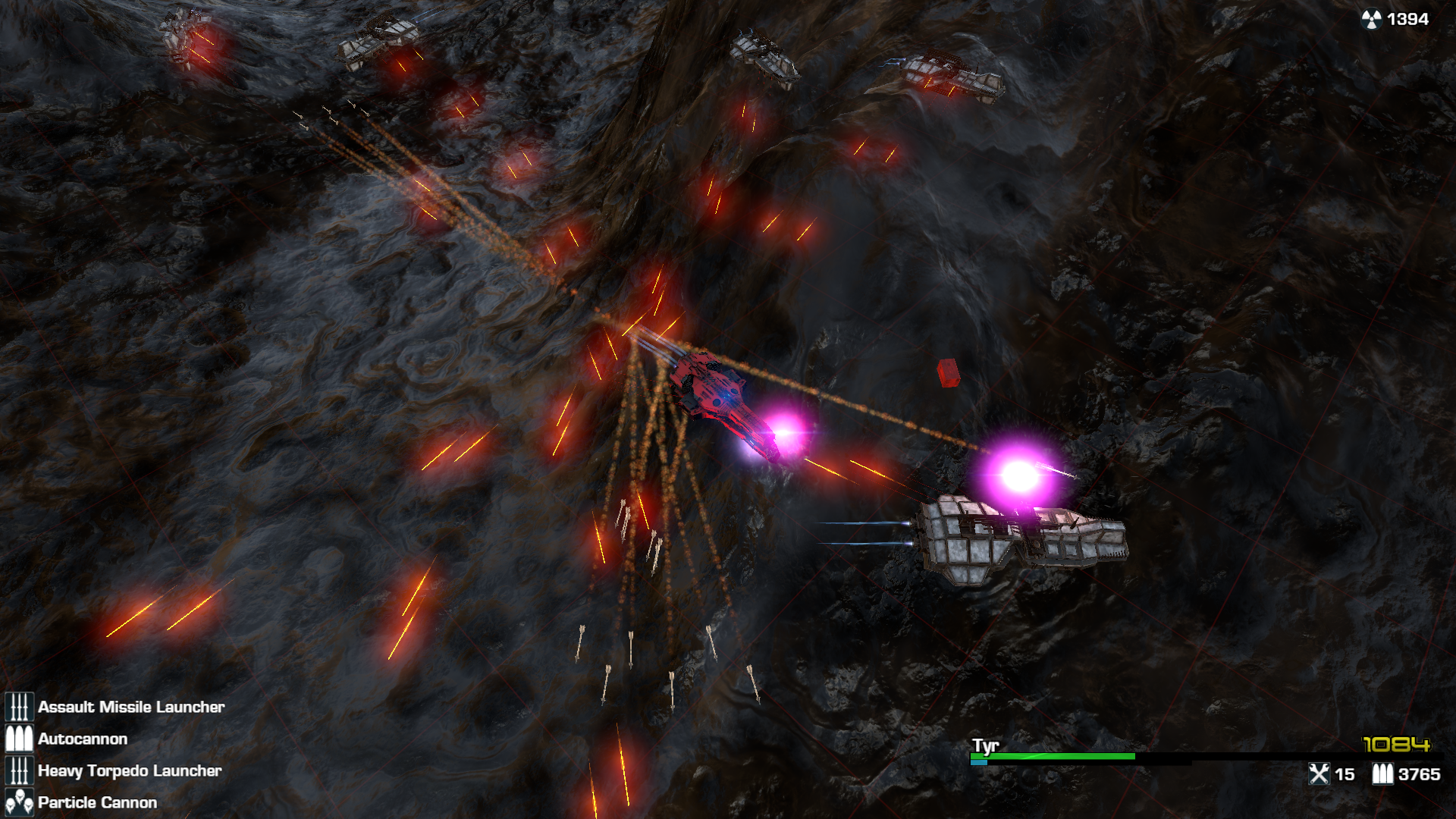 The Support class are the freighters, miners, repair ships, ammunition carriers and fuel tankers that support your fleets resource requirements, the larger quantity/better quality support ships you have, the further your fleet can go without needing to be resupplied, with the right balance of capitals, escorts and support craft your fleet can become a self-sufficient entity, never needing to return to a base or outpost to retrofit and resupply. 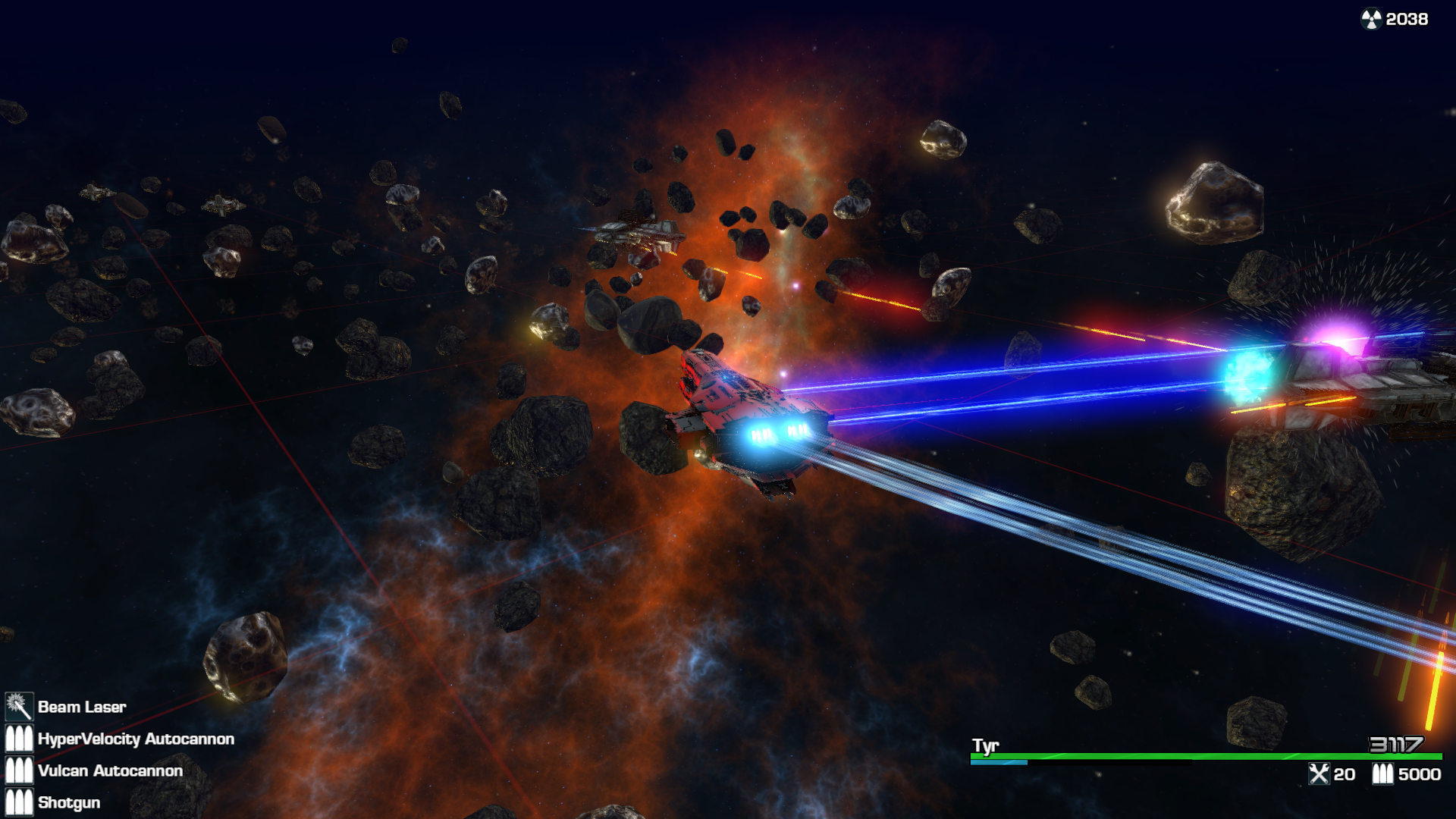 With these changes also comes the ability to support multiple fleets, allowing you to explore vaster areas of the procedurally generated universe as well as the ability to construct stations, defensive turrets and specialised NPC fleets (such as mining, defensive, inter-system artillery, etc..) 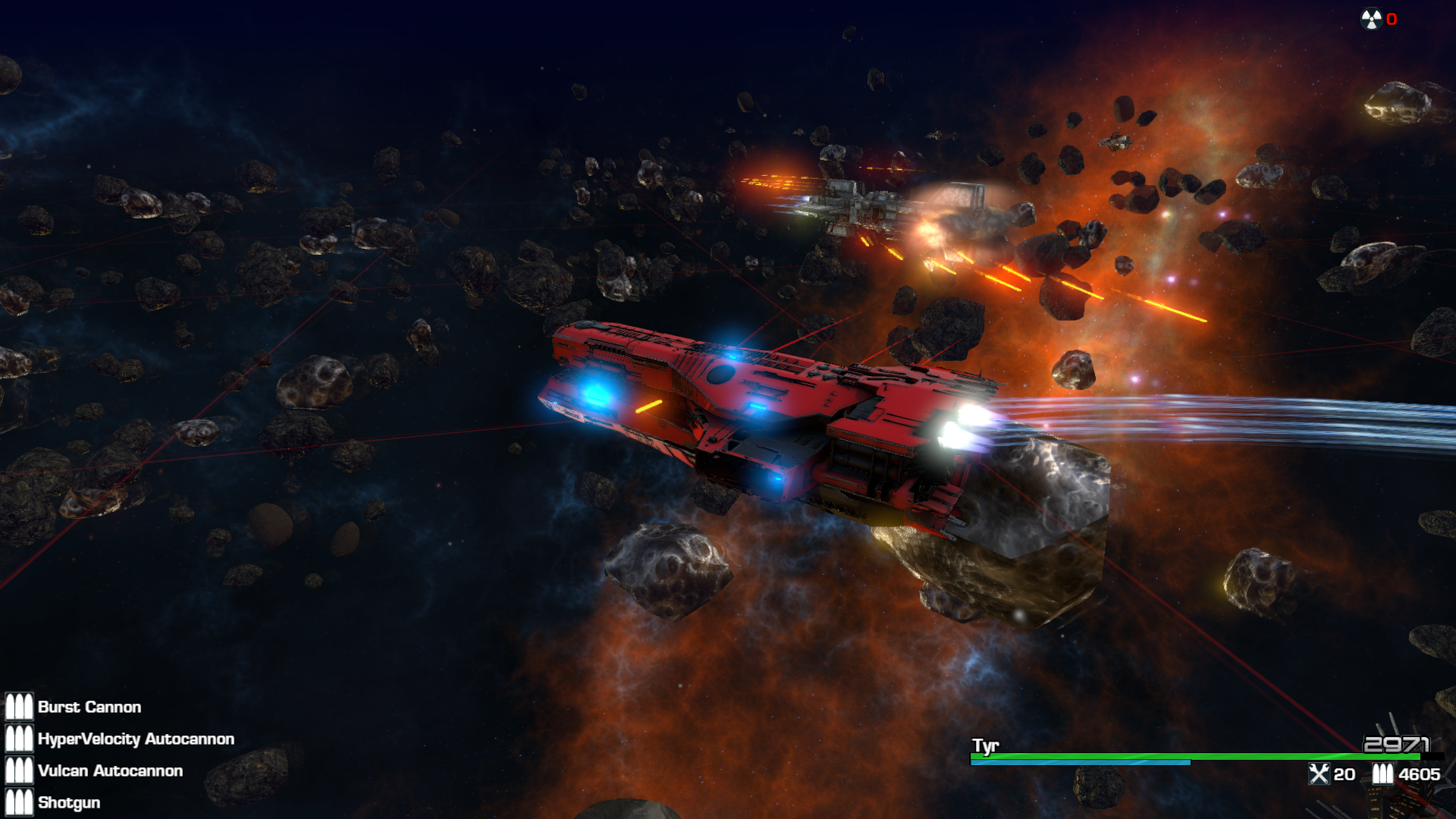 In other less-spaceship involved news, we have also updated our website: Voidnex.com

We also have a forum set up on our site so we can listen to all your feature ideas!

It's certainly been a while since our last news post, and in that time we have made some major improvements and changes to Frontier! The battle system...

Next stage of combat

The next stage of combat in Voidnex:Frontier, showcasing a video of new effects, UI and multiple ship combat.

A small update about the changes that have been made to the battle-system as well as navigating the galaxy.

Demonstrating a player controlled battle in Frontier and going over some of the design principles for exploration.

NOOOOOOOO WHY DOES THIS HAVE TO BE DEAD!

I'm starting to think that this game's progress is dead if there's no new updates about it. It's really starting to disappoint me because this game looked VERY promising! DON'T STOP NOW!! D=

Hey any news on the game?

Any news about the game? Steam Greenlight? Looks promising and gameplay is original ;)

Neither can we :D

Dammit indiedb y u betray me and no show in my notifications! :P

Anyways, Its looking waaay better then when you started! the comabat looks a bit like the stuff you see in star trek (Yay!)but the explosions could use some work. Other than that I think it looks bloody amazing an I hope I can get my hands of some sort of demo soon, because from the vids it looks like we could have some sort of choose a couple ships, control one and let the rest be AI.

will this game be turn based?

I think you should make it so that when a ship is destroyed there is wreckage not just a few pieces like in Sins of a solar empire but realistic debris that you can harvest/scavenge for resources.

Its on the list! along with a whole salvaging profession ;)