Type Quest: Hand of the Mice

Type Quest: Hand of the Mice is an adventure game with varying amounts of combat and puzzles. It is inspired by text adventures of the 1970's and 1980's, and therefore has a type-in command field as its main feature. Outside of movement and target selection, all actions are performed by typing in the command.

In terms of its art style and sound, it pays homage to old 2D games like The Legend of Zelda – in other words, retro games. Just like the type-in command feature, the aesthetics and presentation are a throwback to the old days of video games.

The player has a certain amount of freedom on his adventure. The more cleverly and creatively he uses the type-in command, the more other options will become available.

Sometimes the solution is simple, sometimes it requires some logical thinking, and sometimes there is an alternate solution that is hard to figure out. Going for different approaches encourages the player to replay the game once it has been completed. 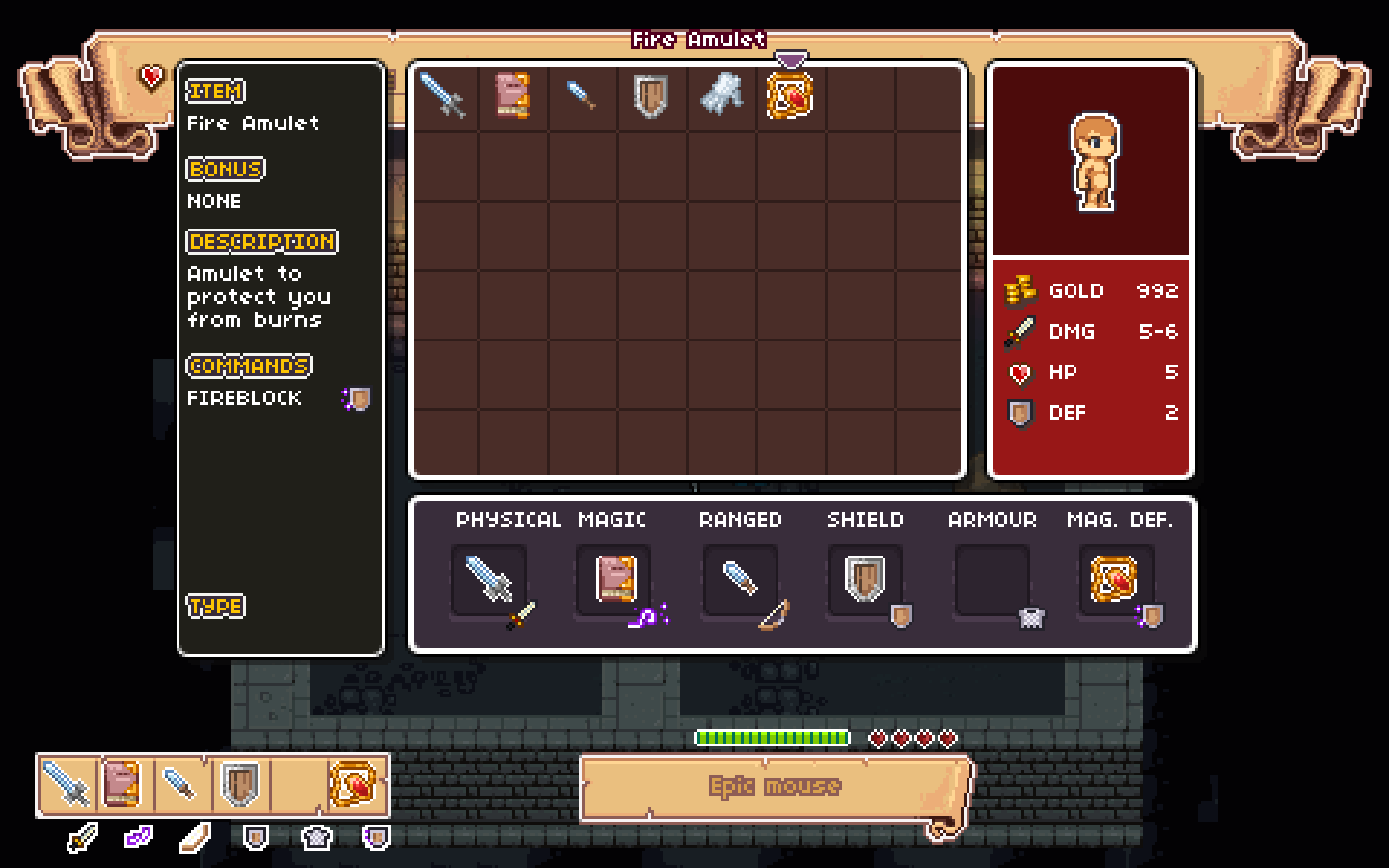 More engine work going towards making outlines work. Specifically a lot has been done on text rendering, which means it is now possible to have text which is colour coded, as well as outlined to increase the contrast with the background.

Equipped items will now show up in the main GUI, showing you what you are currently using. Talking about GUI, a new panel has been added. The information panel. It is showing your current target name. It will also show health & attack timer if the target is an enemy. Later will be able use the LOOK command at an enemy,to get detailed information like attacks and weaknesses.

Back to coding the game. Map loading, sprites, animation systems, this game has it all!

Taking a quick break from coding

Taking a small break from code tonight. Was filling in the clothes in the sprites. Colored fills, insta-jump-suit.

Working with both native AIR as well as web SWF is a pain, but I've sorted things out, which means there will be a live tech-demo on the site very soon!

Love this idea. It looks great and you seem to have a lot of ambition. Keep up the good work!

Thanks! I am happy you like the overall concept. There is a lot still to do, and I've been outlining most of the technical stuff - so It's basically just checking stuff off. Sadly most of the code I am currently do right now, isn't really good to show. But once I nail the systems down, it will another case.

I really like the artstyle of your game and also the idea. I wanted to play some old-school textadventures, but the lack of graphics really scared me off. So I curious what this game will offer. Is there a demo planned?

I am currently working on getting all the systems in place. It will go into a closed alpha at some point, and I will probably also be showing off some tech builds. As for now it wouldn't really be much fun, as there isn't much of a game yet.

We are still working on lore, enemies, environments and all the other stuff. But I would love to show some footage relatively soon - showing off some of the mechanics.

Thanks for your comment by the way; keeps up the spirit ;)

Closed alpha sounds good to me once the time has come ;).

There's the first Tech-online-test available on the site, not really representative of the game, but it will give you an idea about the mechanics.