"The Vagabond Emperor" is a 2D RPG where you begin as a simple vagabond who decides to become an emperor in the fictional Middle Ages during a spreading curse. It's up to you to decide what to do and where to go to achieve your goals.

For example, playing as the king's brother, raise an army, kill him, and receive the royal title by right of succession.
Or seduce his wife. Continue the game for the child born and get the crown after unsuspecting brother.
You can get a job and earn a certain amount of money, then build a factory, get an income, and buy a title.
Then build your own city, declare yourself king, and go to capture other towns.
As an alternative, engage in begging, use the money to install artificial limbs, and go to seduce the queen in this guise.

Take part in battles and win personally by fighting in the front lines. Swords, axes, bows, pistols, and arquebuses are yours for the taking. Recruit fighters for your side and troops for your home and town garrisons. Gain rich spoils of war and lord your will over the vanquished.

So, today we have an important topic - character traits. How successful the character is in certain game events, checks and battles will largely depend on them.
"Strong", "Hardy", "Seducer", "Midget" - these are all features. And yes, a strong, hardy midget-seducer may well be found in this world.
Most of the features change the attributes of the character. As soon as a character loses a trait, he loses attributes as well.
The main idea is that we do not manually edit attributes, we get the features and this changes attributes. Traits can have a duration, after which they disappear by themselves. And maybe for his whole life.
A special kind of feature is disease. They reduce attributes, last for a while and then pass. In addition, fatal diseases can kill a character.

You can customize the features manually only for the first character - the ancestor of the dynasty. Each feature has its own value in points. The sum of points cannot be below zero. So, if you want to take a few "good" features, you will have to take a few "bad" ones. The number of features when creating is 4, during the game - unlimited. Or you can just press the "Random" button and enjoy the created character :-)
But children inherit both attributes and traits. While there is an accident here, an enduring character does not necessarily have enduring children. 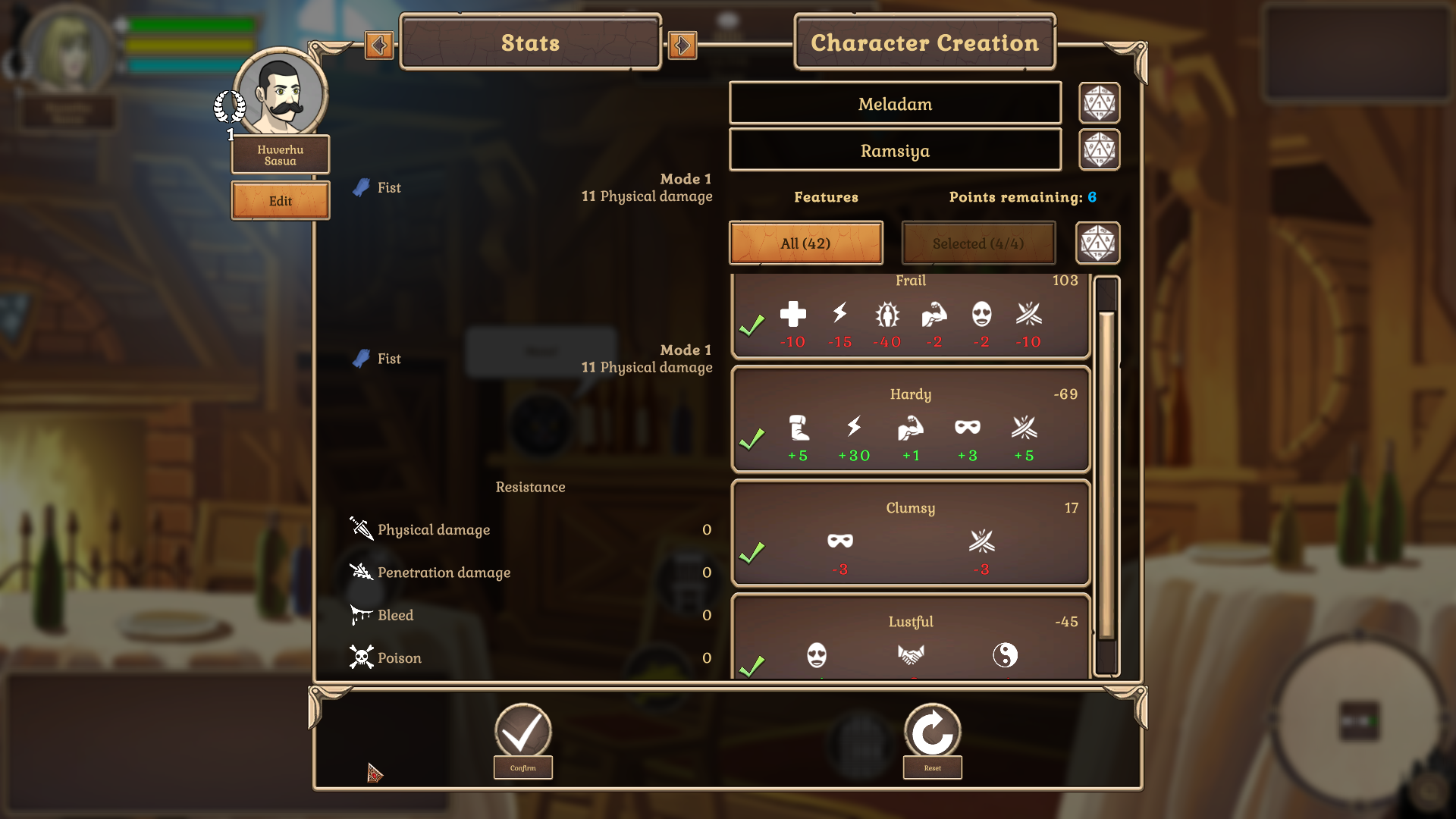 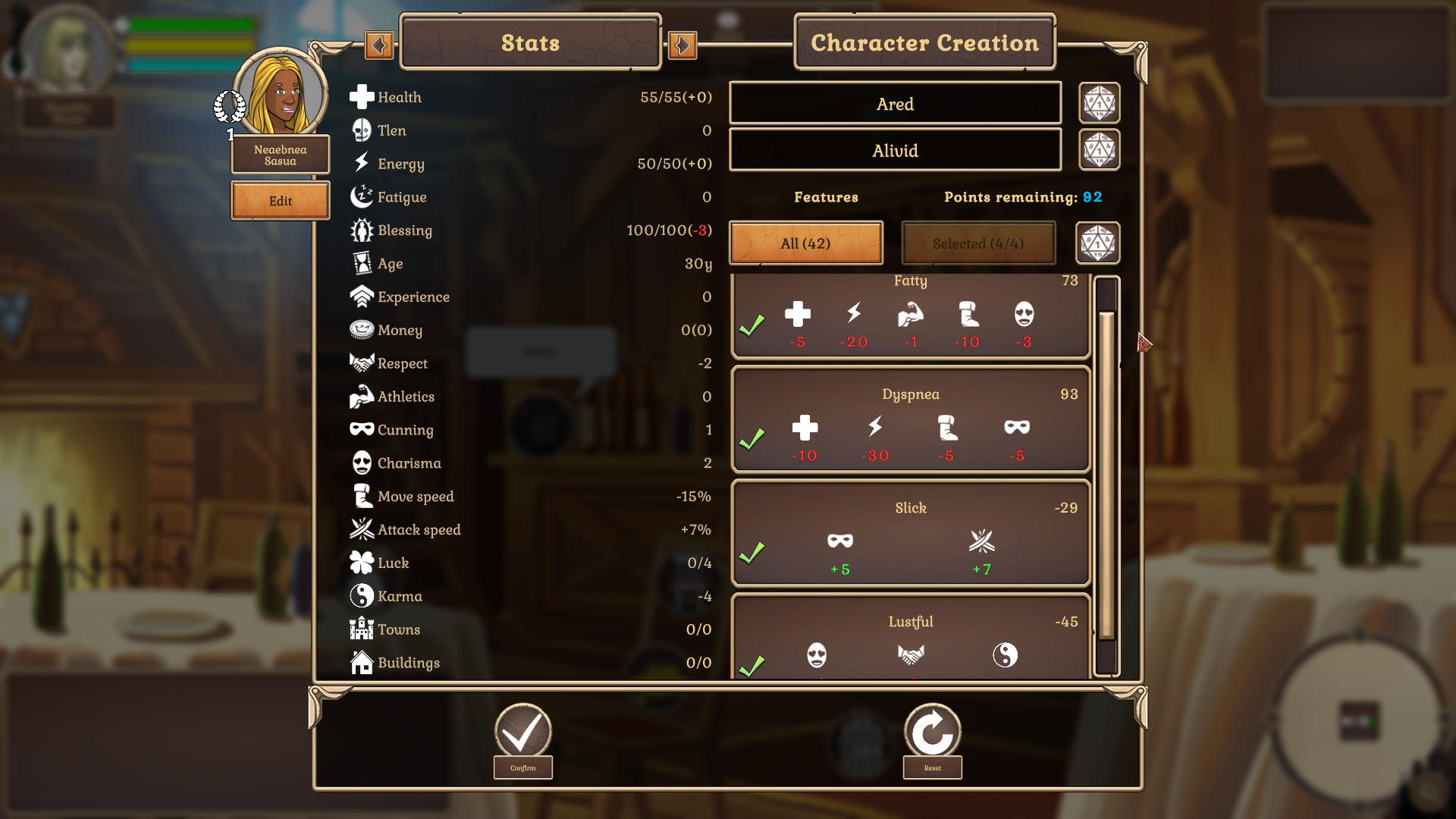 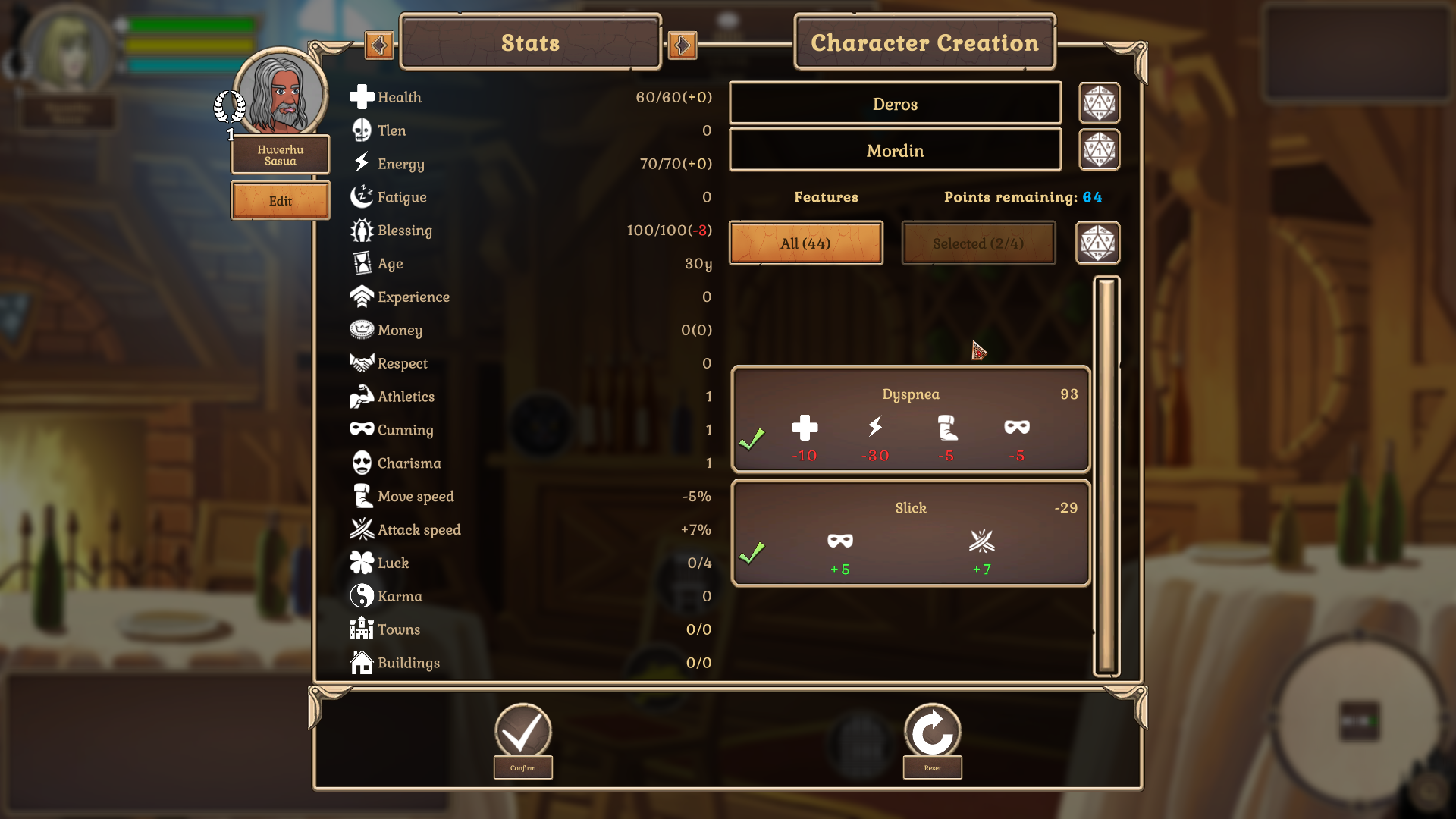 Friends, this is a very broad topic, and we will return to it in the future.
Thank you for your attention, ask questions, subscribe and add to your Wishlist on Steam

I want to tell you much information about world generation in the game "From Bum to King".

Hello, friends. I finally remake "From Bum to King" trailer. It was long difficult way, but it's done!

Did you clean your keyboard at this moment?

I especially love the eyebrows. As your name suggests: WigglingEyebrows :)

I didn't play it but I can make some critics and advices according to a trailer:

- Game's artistic consistency is good. Art style, colors, UI are all in sync.
- Explore dungeon map is a bit simple with only icons. It needs more to show itself.
- Smite enemies section is nice to player feeling of smashing. Smashed or died characters can be shown with different faces.
- Bulletin board can be populated with sketches instead of pure writings.

But overall, it is a good game. You are only developer and I appreciate your enthusiasm. This is also a hard genre to be developed by only person.

With all of these in mind: I gave 7/10 to your game. Please keep up developing and putting something valuable to the game world; as you already did with this one :)

Thank you very much for support and suggestions. I'll try to do the game better, and your opinion is very important. I notice that I don't update screenshots much time. This was changed so much.

The idea is good, you have to work on the graphics
anyway thanks for the work done

Thank you for support. This is an old video. GUI is totally remade. Need to add new videos and screenshots

Indie
Tags
Embed Buttons
Link to The Vagabond Emperor by selecting a button and using the embed code provided more...