Siralim is a deep RPG with light roguelike elements that allows you to summon and customize hundreds of creatures to fight in strategic battle. Fight your way through randomly generated dungeons and complete randomized quests. Find rare treasure and use it to upgrade your castle, empower your creatures, craft powerful artifacts, learn new spells, and much more.

Please visit us at www.siralim.com.

You can download or purchase Siralim via the following links:

Siralim 2.0 has been released!

Siralim 2.0 is our largest update so far, and packs enough content to be comparable to an expansion pack or even a whole new game in some cases. Below is a short preview of what you can expect to find in this massive update.

All New Graphics
From the onset, we weren't satisfied with the way Siralim's graphics looked - and I'm sure you weren't either. Therefore, we re-designed them all from the ground up. We're pretty pleased with the results. What do you think? 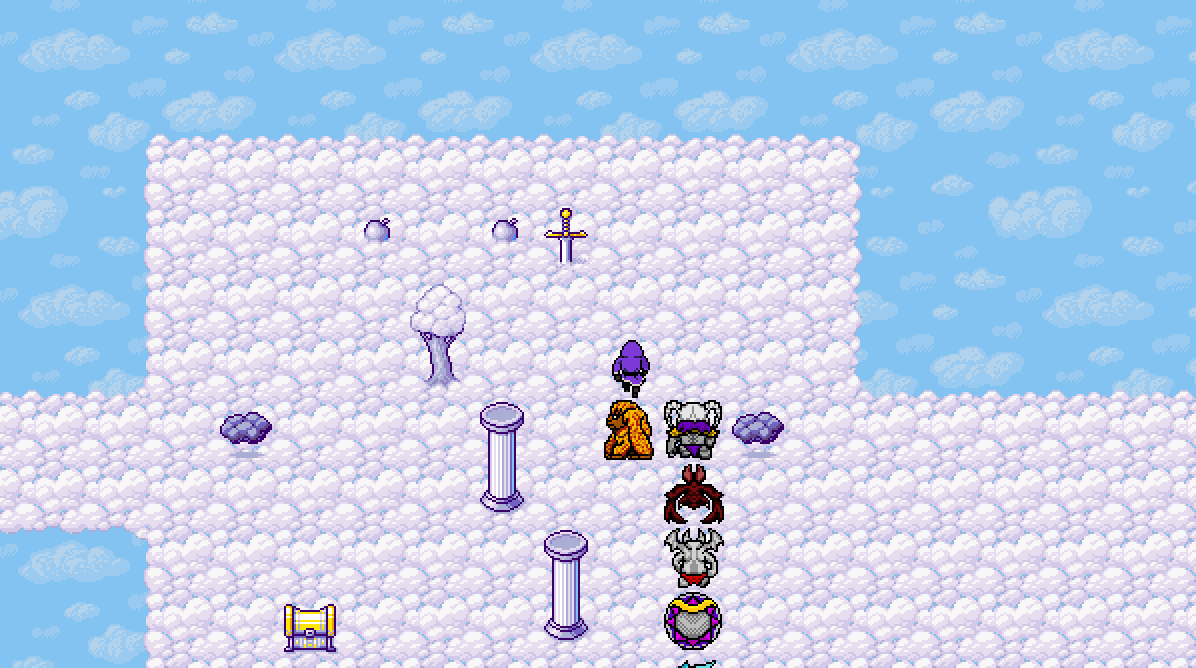 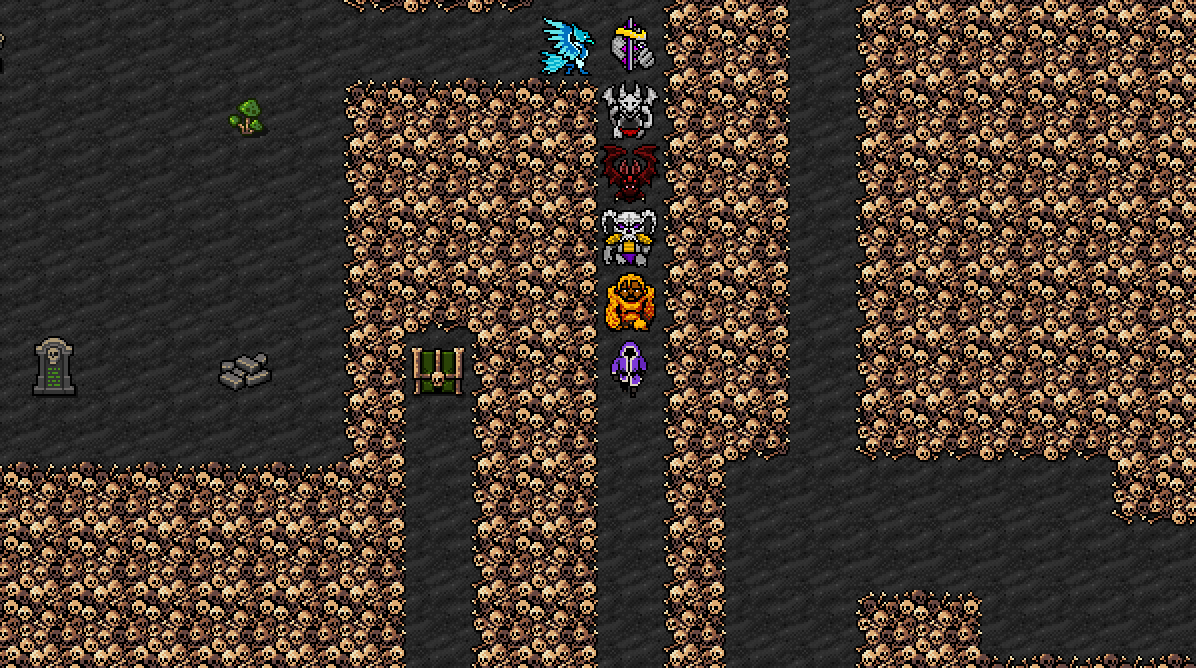 Royalty Points can be distributed to one of three major categories: Character, Creature, or Perks. Each category offers a bunch of different bonuses. Below is an example of bonuses for each of the three categories:

Character: these bonuses improve your mage directly. There are currently 28 Character bonuses in the game, some of which include:
- Increase Maximum Power Balance
- Increase number of charges found on spell scrolls
- Increase chance to find a treasure chest after battle

Creature: these bonuses improve all of your creatures passively. There are currently 11 Creature bonuses in the game, some of which include:
- Increased attack/health/defense/luck/speed.
- Chance to dodge attacks.
- Defense piercing, which allows your creatures to ignore their targets' Defense.

Perks: these are class-specific bonuses. For example, Death Magi will be offered different perks than Nature Magi. The goal of these perks is to add some serious differentiation between all the classes and make each class play differently. Death Magi can finally feel like necromancers, Sorcery Magi can finally feel like real spellcasters, etc. Each class currently has 5 unique perks, some of which include:
- Some of the experience points your creatures gain in battle are also granted to all the creatures in the Stable. (Nature Mage)
- Chance for a much more powerful effect to occur when using a Pandemonium Token. (Chaos Mage)
- Chance for your creatures to resurrect as a random Death creature when they die. (Death Mage)
- Your spells have a chance to not consume a turn. (Sorcery Mage)

All of the bonuses listed above have several "ranks" that you can obtain. The higher the bonus' rank, the better it is or the higher chance the effect will occur. Here's a look at the user interface to give you a better idea of how it'll all work: 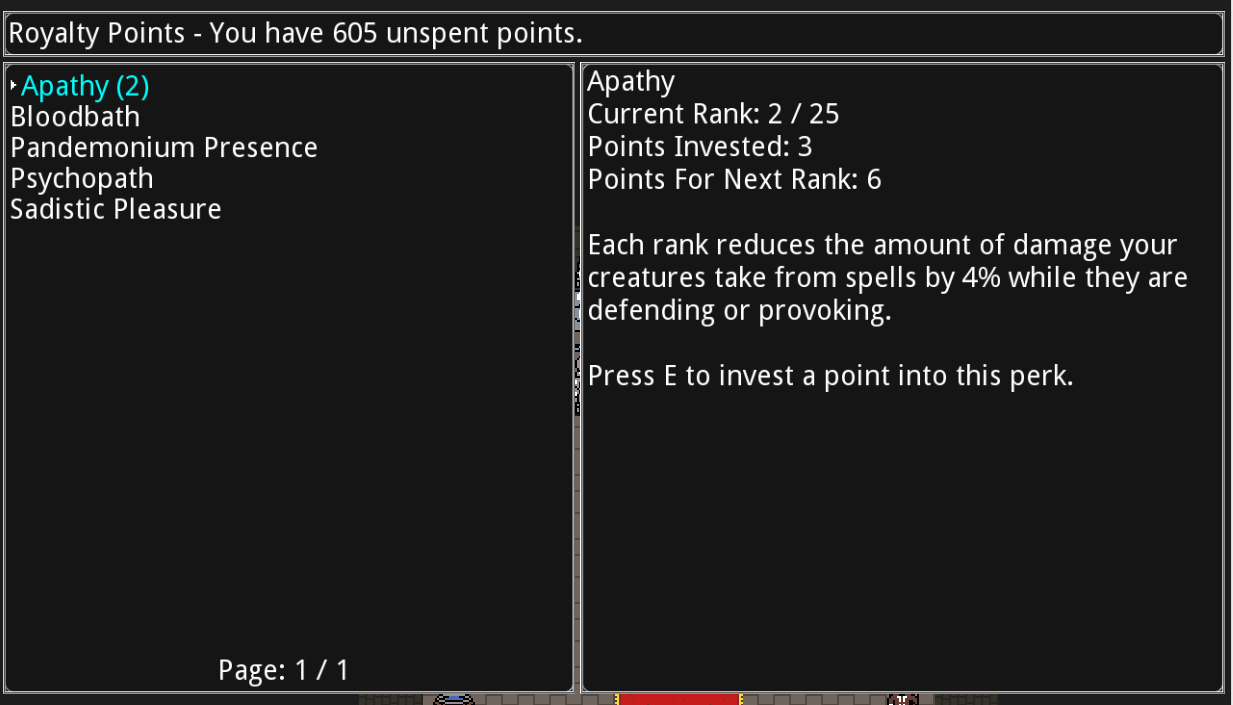 As you can see, I have 3 points invested into the Apathy perk, which is enough to give it rank 2. These means that my creatures will take 8% less spell damage when they're defending or provoking. To get this perk to rank 3, I'd have to invest 3 more points - this cost is specified next to the "Points For Next Rank" text. This particular perk can go up to rank 25 before it's maxed out, meaning my creatures would be immune to all spell damage while they're defending or provoking.

You can invest in any bonus or perk in any order you want. There are no restrictions with this system at all.

This system allows you to customize your character and creatures to suit your playstyle. As a side-effect, this will also allow you to travel to higher Realm levels at a faster rate, which should make the game more enjoyable overall. The Royalty Points system will be expanded on over time, and each patch you can expect to see new bonuses and perks added - including a new major category that I'm not quite ready to announce yet. 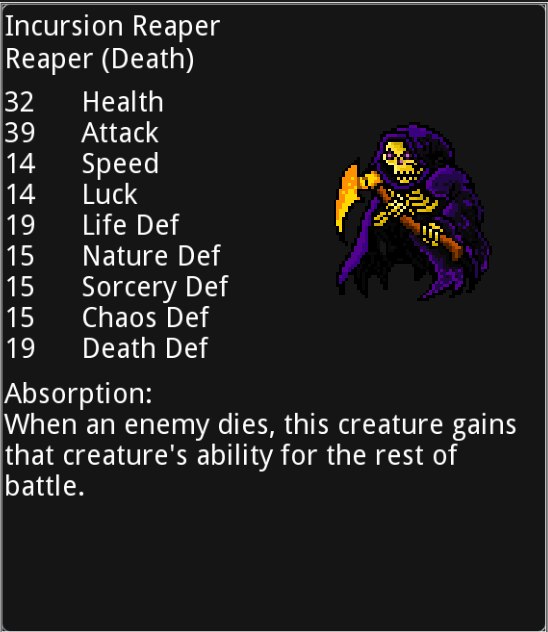 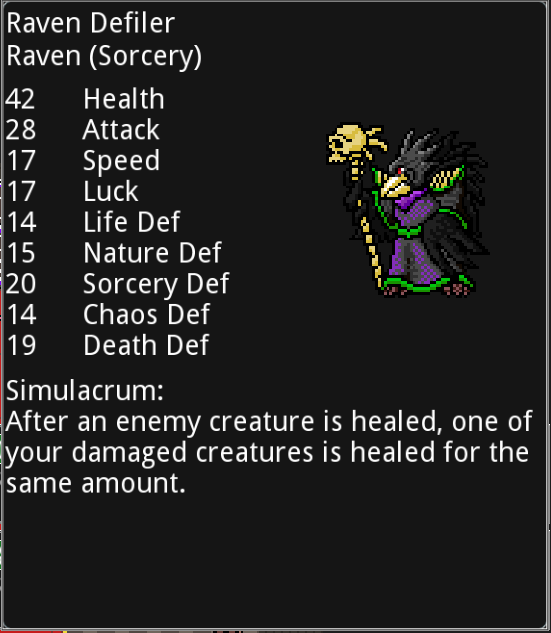 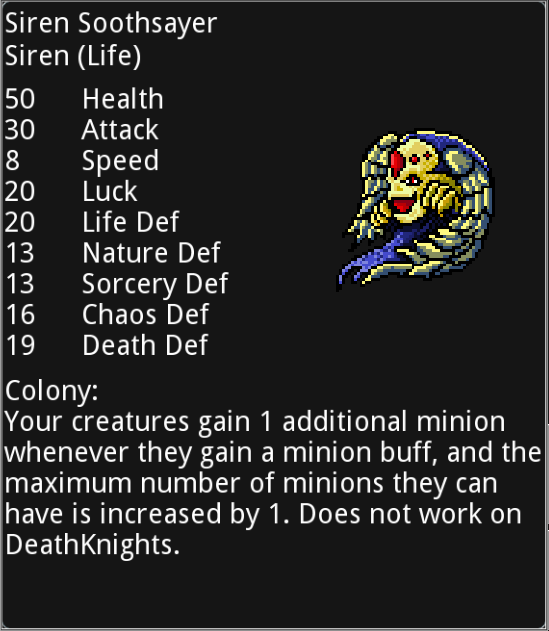 Other Additions
We've added plenty of other things as well. You can now encounter traveling merchants anywhere in the world who will sometimes sell rare and powerful items. We also revamped the way spells work - instead of a lot of spells dealing damage equal to a percentage of the target's maximum health, the damage now scales based a new character-specific stat called Spell Power. And finally, we've upgraded our engine - you'll notice that the game loads much more quickly than before and has far fewer crashes and bugs.

There are plenty of other changes, so I encourage you to read the full patch notes here: Thylacinestudios.com

I hope you enjoy the patch!

This update features a brand new user interface, and overhauls to the loot, resources, and artifacts systems.

This patch includes an overhaul of most creature abilities, spells, and battle conditions.

This update adds support for gamepads, and features a new battle mechanic: Provoke. Read on for details about this new command.

Siralim is now available for Mac!

In addition to Windows and Android, you can now play Siralim on Mac. Read on for details.

The demo version of Siralim includes the full game, but has a character level cap of 15. After that, you will be unable to progress until you purchase...

The demo version of Siralim includes the full game, but has a character level cap of 15. After that, you will be unable to progress until you purchase...

Siralim goes right to the heart of what’s fun in a stat building, dungeon crawling, turn-based roguelike (esk) RPG. If you like building creature rosters (catching ‘em all), finding and upgrading items, spending stat points, combining unique passive skills for synergistic badassery and purchasing new parts of your castle to unlock more upgrade potential … this game is for you! There’s no plot to speak of and no super shiny graphics; just the old SNES RPG look and over 325 creatures to find (that’s not a joke either … just over 325 at this time). The music is appropriate for an olde-timey RPG and the nether creature system lets you make SUPER high powered versions of the monsters you love the most. I can’t say enough about the game so I’ll leave it at, “this is pure, unadulterated, unmitigated fun!”

In addition to this game being incredibly fun, the developer is the most stunningly dedicated developer I’ve ever seen. Example: I mistakenly closed the game (click on the X and she’s gone!) and it was at the absolute worst of times. I had just handed in 20 hours’ worth of lovingly crafted items all for my first big super high powered creature … but I had not been given the creature yet. When I restarted the game back up I had no creature nor did I have my creature items. I posted about this on their website and in a few hours (on a Sunday) the developer, Zack, replies to my post and asked me what I lost and then sent me an e-mail with a code to use in game to get it all back. You read that right, the developer refunded all of the stuff I lost when it was my fault! They also go to their own Reddit and hunt down errors to fix there! Check it out the dev finds problems on there and just asks them to post on the forums about it and VOILA! FIXED!

Why is that good games are never recognized on this DB but poorly made FPS and Minecraft games with default unity assets are?

Does this game not work on XP?

Hi, there is currently a compatibility issue with Windows XP. It will be fixed in version 1.0.8. Thanks for your interest!

Siralim is so much fun on my phone!

This game looks and sounds cool. :)