Star Wars Battlefront gives you the chance to play as a soldier in intense multiplayer battles with up to 32 people. Choose your allegiance and pick a soldier from one of four different armies. Fight on ten legendary planets and use a variety of weapons and vehicles, including X-wings, snowspeeders and AT-ST's. Keep your wits about you and victory may be within your reach. Experience the chaos of battle as you fight the greatest wars in the Star Wars universe.

In addition to the single-player and various multiplayer modes offered in Star Wars Battlefront, a unique "Conquest" mode adds an innovative and strategic gameplay element to the action. After each battle is completed and the planet is conquered, the winning team will be rewarded with a special "bonus" ability that can be deployed in future battles in an attempt to take over the Star Wars galaxy planet-by-planet.

Hello everyone, hope you're doing well.

It's certainly been a hot minute since the last update.
Almost 8 months now you've been in the dark as to what me and the team have been up to this whole time.
I've been waiting for the right time to announce it, making sure we could actually pull it off without any false-promises.

And that time is now.

Presented today are limitations that were forever thought to be impossible to alter/fix.
Limitations even the greatest/most experienced reverse engineering minds of the Battlefront modding community haven't been able to fix in over 15 years.

Through many, many hours of rigorous testing and troubleshooting, we are happy to finally say we've done the impossible.

- Fix model memory limitation (Low res units fix) - Completed ✅
~This fixes the jarring switch out of hi-res unit models/animations to their low-res counterparts. In vanilla, the max hi-res units you can have around you is 3 at a time. This limitation is removed, allowing for hundreds of hi-res units on screen at once with hi-res animations. No more tumble-weed troops!

- RedEngine Memory Increase- Completed ✅
Along with playing a role in fixing the model memory, we have raised the memory allowed by RedEngine as a whole, which allows for over 500 million polygons on screen. We have tested this with un-optimized BF2 2017 models with 400 troops, and it doesn't break a sweat! This fix opens up the door for modders to go ham and create beautiful hi-poly assets and effects for the game.

- Raise the total working AI count allowed on the maps- Completed ✅
Though vanilla has no real limitation on the number of units that can spawn on a map, the max amount of active units total is capped at around 100, however. On larger maps, this causes 50 or so units on each team to stand around doing nothing until they reach their place in the queue. We have done away with this limitation, and now all units are able to be activated by the AI system!

- Command more than 2 AI with the 'Follow Me' key- Completed ✅
Ever wish you could command more than 2 units? Well we did, which is why you can now command 8 units! Now you can finally lead a decent sized raid-party to capture those enemy CPs.

- Fix Crouch glitch in steam version- Completed ✅
Have you been playing the Steam version of Battlefront and noticed the crouch button sometimes making you go prone? This annoying bug is now fixed!

- Fix Zero Editor Memory fix- Completed ✅
A good fix for you modders out there who want to edit a map without having to offload your textures and models. We have created our own 'HD' patch for Zero Editor that allows you to load maps with higher resolution textures without it crashing. Saves a lot of time!

- Increase Vehicle limit- Completed ✅
*In vanilla you can have a max of around 20 vehicles on a map. We have removed this limitation, allowing for massive air and tank battles.

- Fix limitation on foliage distance/amount- Completed ✅
Raises the distance at which foliage can appear on screen. Naboo: Plains now has big lush fields!

- Fix limitation on decal distance- Completed ✅
Raises the distance at which decals ( like terrain burns ) can appear on screen, and the amount. Watch as the battlefield progressively gets more destroyed!

Due to the fact so many limitations have been removed from the game, we are aiming to completely overhaul the game's graphics, which includes Hi-Res vehicle and unit models, as well as higher poly models for buildings.

--MODDERS WANTED--
If you or someone you know would like to help out with this endeavor, please reach out to me.

To keep up to date, please visit our Discord- Discord.com 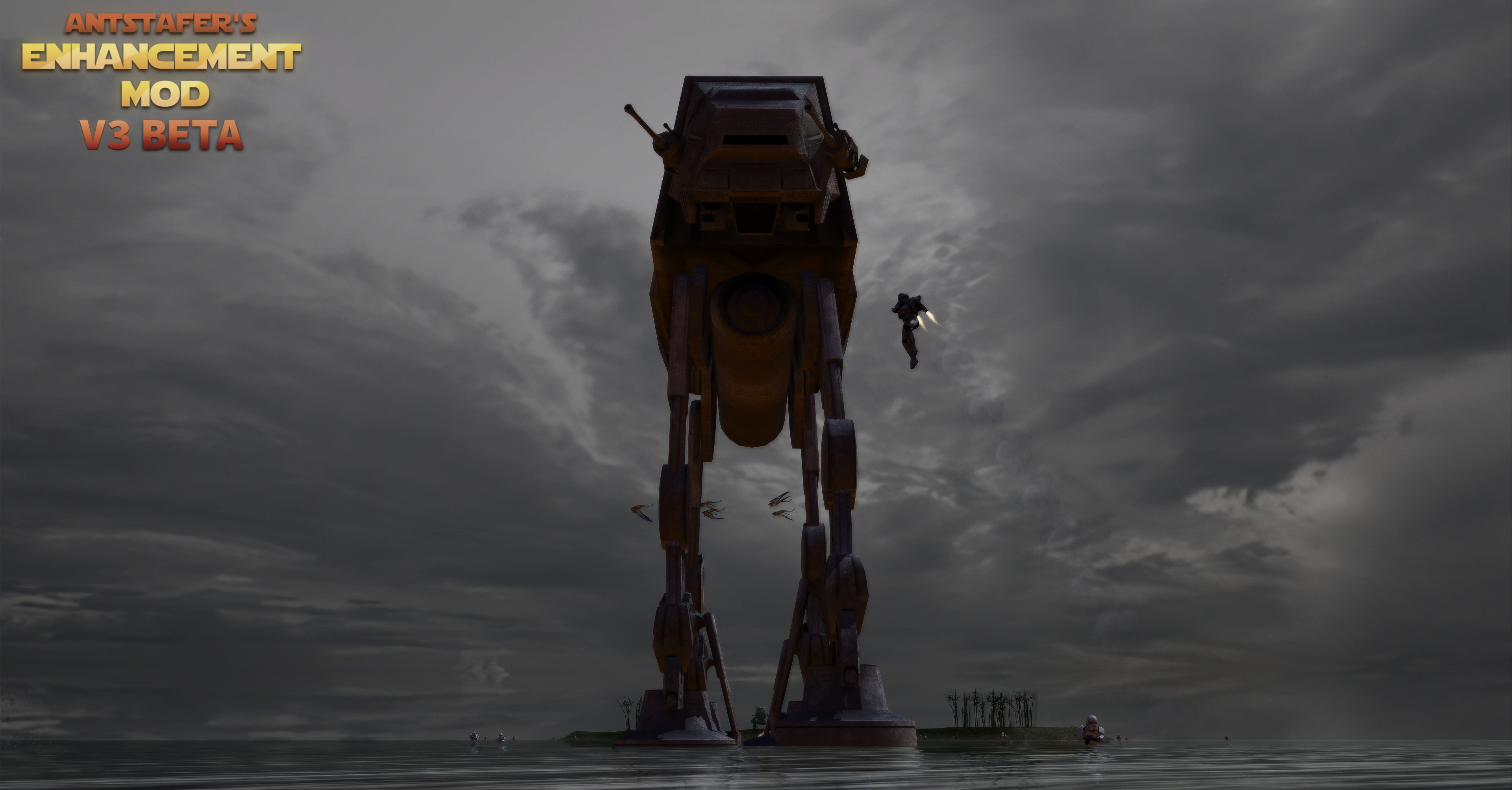 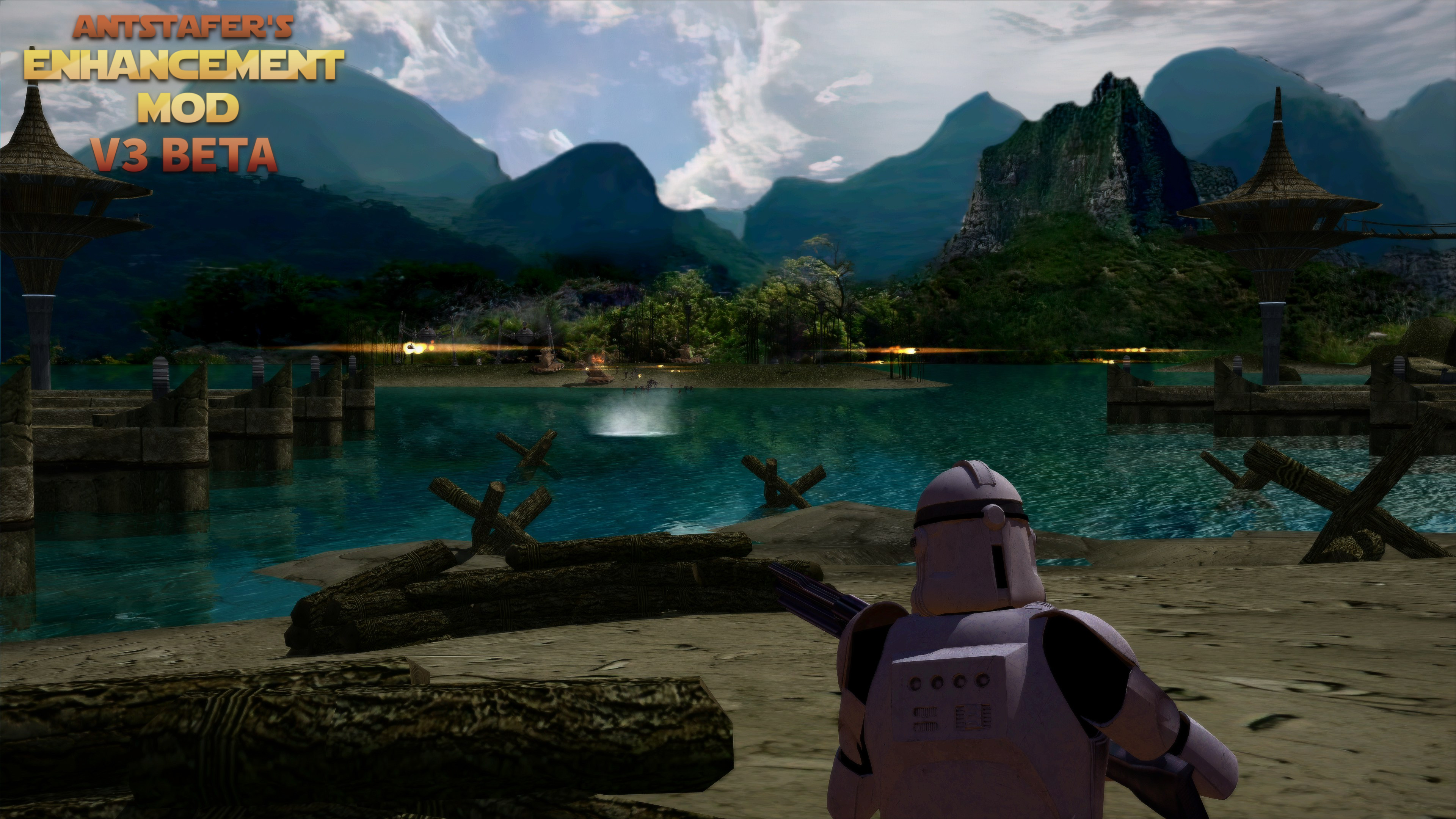 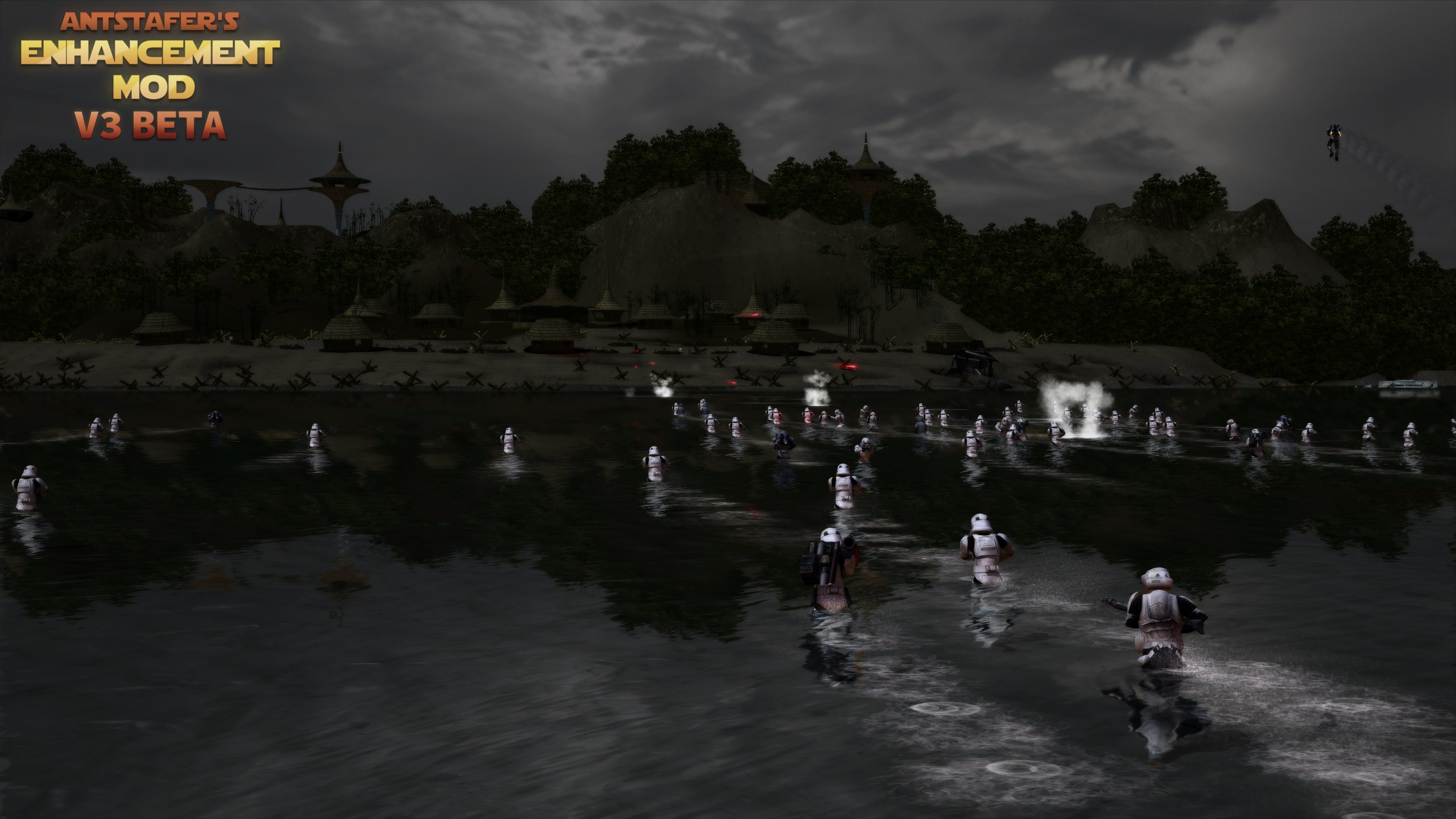 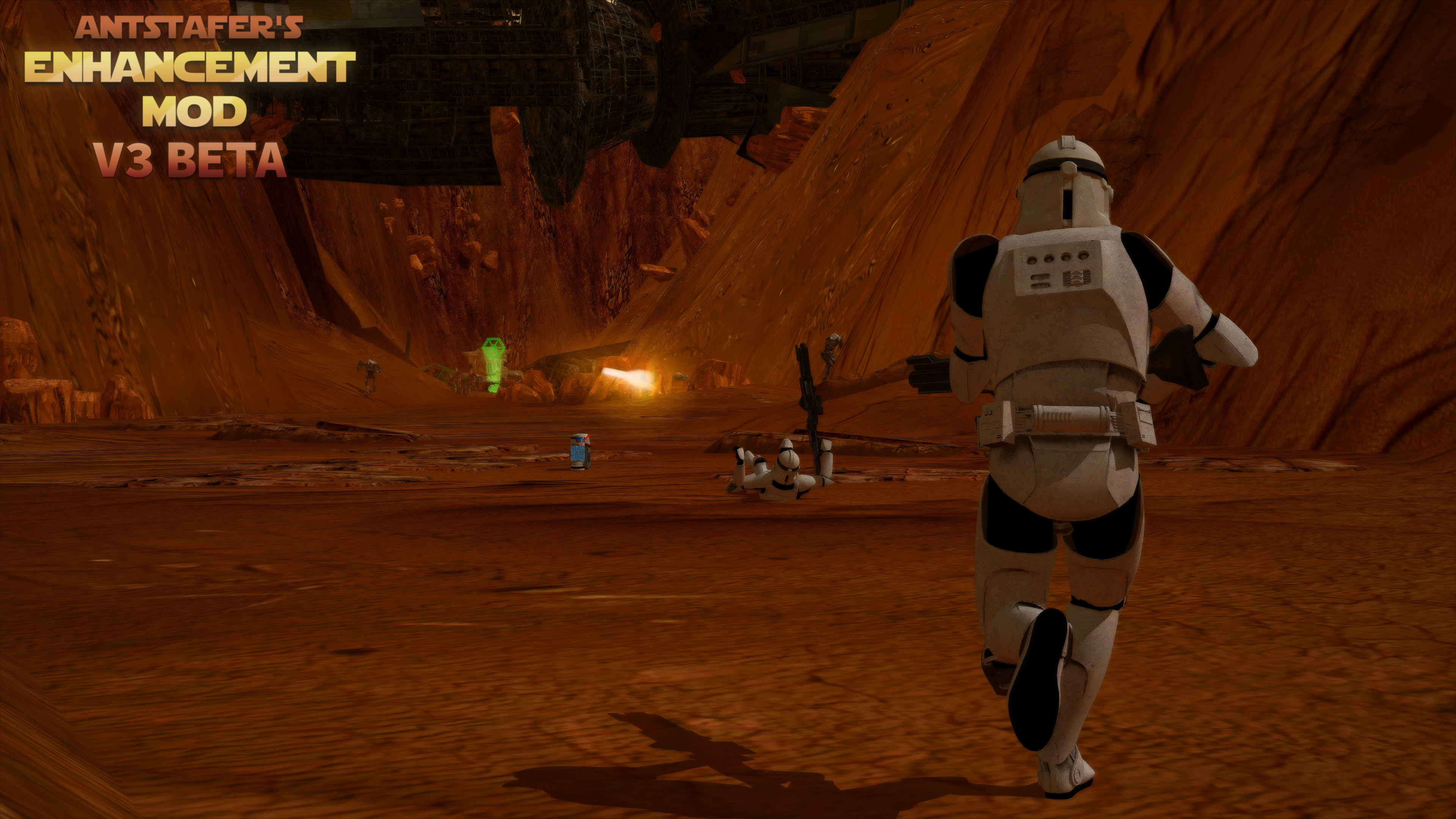 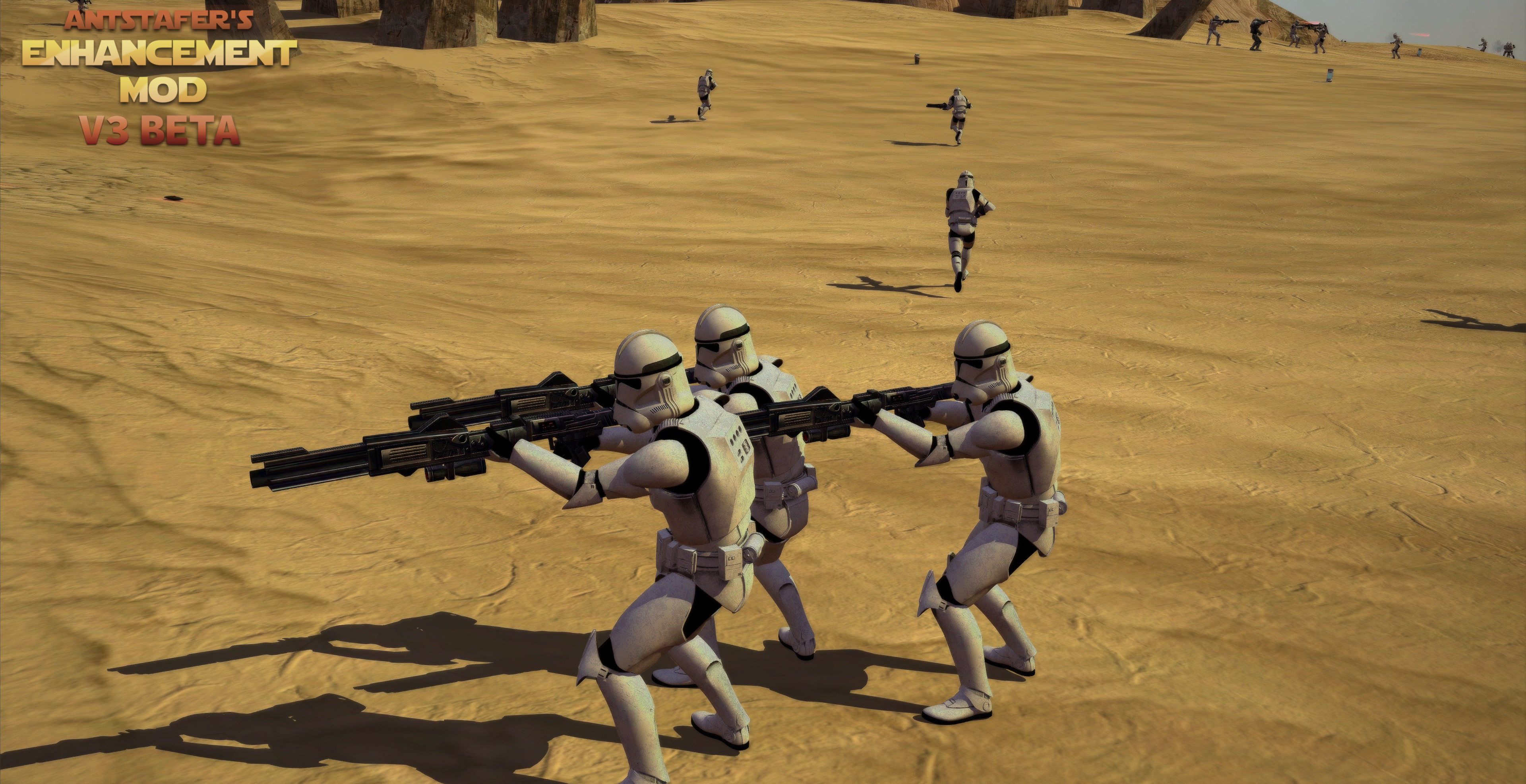 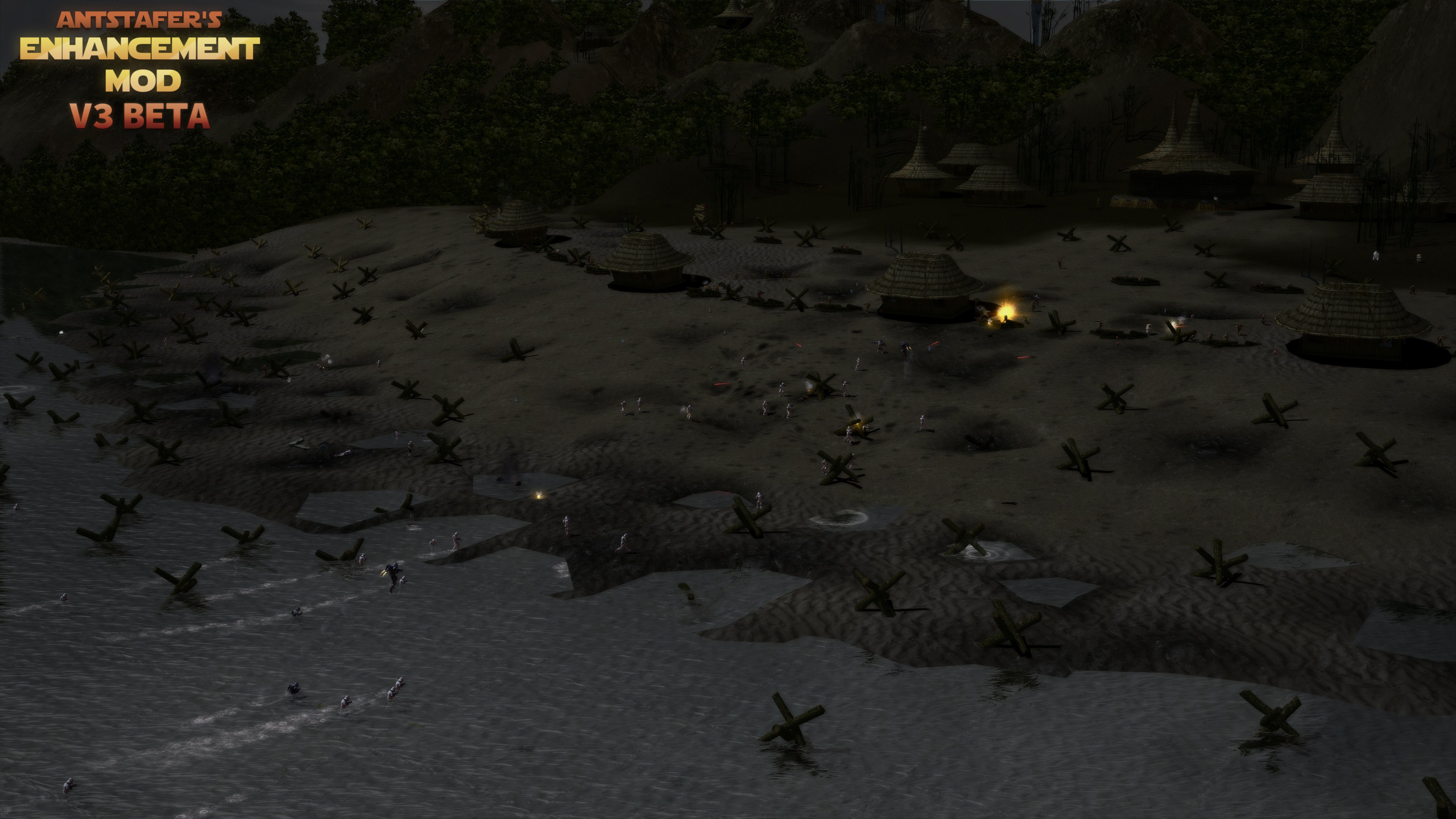 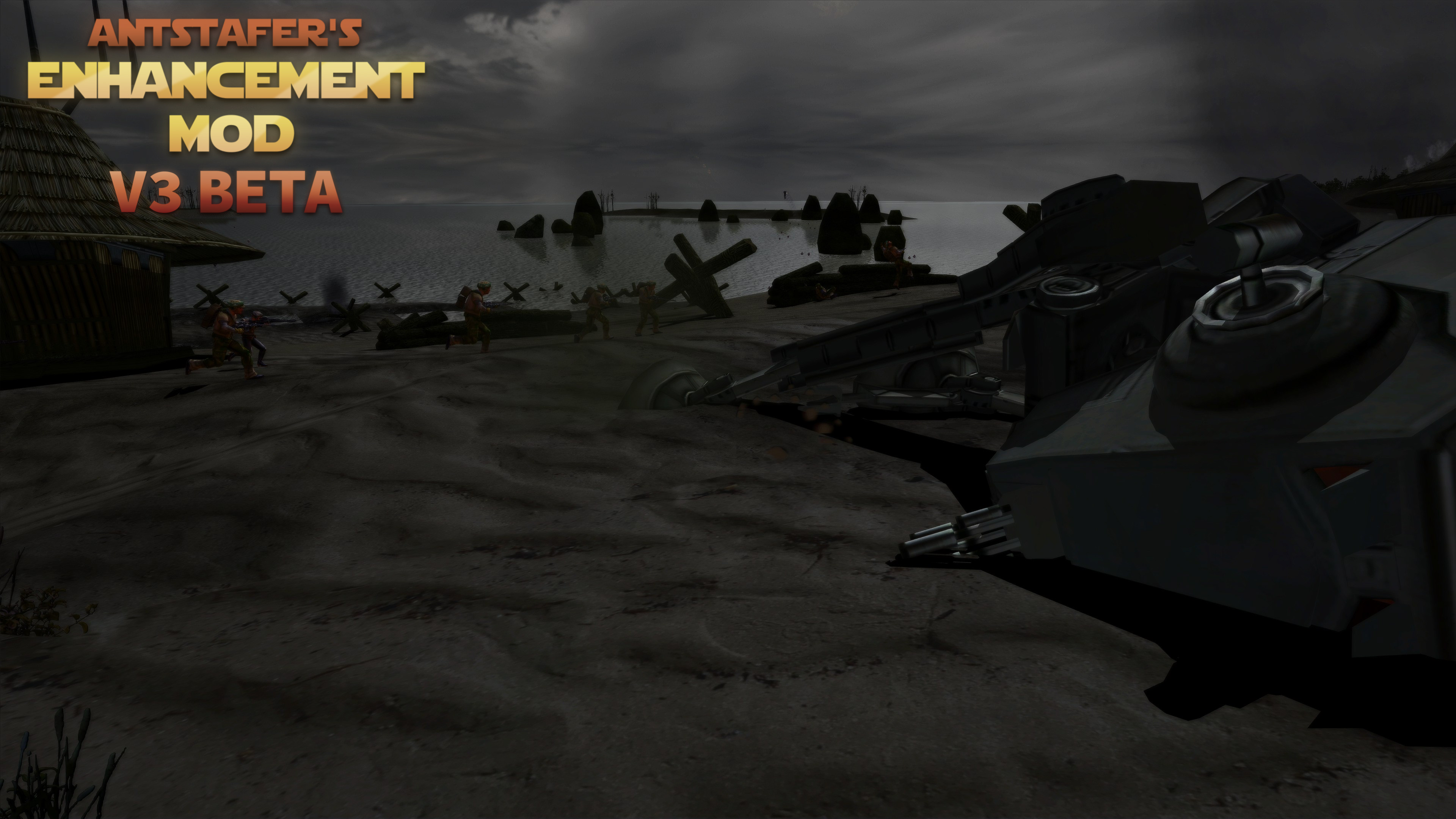 Started as a successor to Eisenfaust's Realism Mod, this mod is set out to be the absolute pinnacle form of what Star Wars Battlefront could have been...

Started as a successor to Eisenfaust's Realism Mod, this mod is set out to be the absolute pinnacle form of what Star Wars Battlefront could have been...

An article about Star Wars Battlefront: DICE Edition, its origins and its development.

install into your addon drag both tcw 2 and era into your addon. to install the optional skin changer go to gamedata data _lvl_pc and replace your common...

This is an optional version of the mod to include the sniper class due to popular request. Sorry it took so long. If you want heroes to be invincible...

IMPORTANT: this map does not belong to me, all credit belongs to gogo12 who created the mod originally. I'm just re-uploading it since I couldn't find...

Contains both Pack 1 and Pack 2 for ease of download for people who haven't downloaded either. Contains all seven maps released so far.

This is a custom map for Star Wars Battlefront 1 2004. Canyon Oasis is a multiplayer-only map from Jedi Knight: Dark Forces 2 that gained notoriety on...

When someone doesn't capitalize CIS, I think they're talking about straight people.

can someone publish the german language files please

My tatooine file for mos eisley isn't working, and I have reinstalled and it didn't work. Can I have someone else's?

There is an improved SWBFSpy.net master server being constructed when it's ready I'll post the link here (it won't be on SWBFGamers since they don't host it anymore).

The real official SWBFSpy master server patch is @ SWBFSpy.org
It can be downloaded from SWBFModders.com
The swbfspy dot com and dot net domains are fakes.
Mods, tools, tutorials, and more for both original games at www.SWBFModders.com

I'm glad that someone still makes mods for this game and people still plays it :)

Does anyone has this mod:
Moddb.com

Or by any chance, the models of the Naboo Royal Security?
Please write me a PM message on ModDB or leave a comment here

If you want the mod, this video has a link (Idk if it works but it looks legit.) Youtube.com

One of the BEST FPS' I've ever played, and still continue to play. Fun gameplay and iconic settings!

Salò, or The 120 Days of Terror First Person Shooter