A group of stalkers, for the first time, reaches the very heart of the Zone-the Chernobyl Nuclear Power Plant-and triggers a cataclysm on the brink of a catastrophe. An immense blast of anomalous energy transforms the Zone: the once reliable and relatively safe roads are no longer so, the landscape is wiped clean by outbursts of anomalies, and previously unknown areas appear on the Zone map. Stalkers and expeditions perish or end up isolated within the lost territories.

Now this tutorial is mostly for people who edit S.T.A.L.K.E.R. Call of Pripyat, because this the only way of editing the all.spawn for that game. However, this also works on other S.T.A.L.K.E.R. games.

So first things first. We need tools. Here's a list (I will provide the rest of the links at the end of the tutorial):

After we got the tools out of the way (last one is pretty important), we can get started. When you download the acdc.pl file, you might also get the Decompile.bat and Compile.bat files (however it is not guaranteed you will get them). In order to unpack all.spawn, we need those .bat files, so here's how to make them:

So now we are done setting up. To edit all.spawn, you need to copy the all.spawn and put it in the same folder with the previous files (acdc.pl). In order to open it, you need double-click Decompile.bat. A quick window of command prompt will appear, and just follow it's instructions. Now you will see 11 .ltx files (and sometimes 2 .bin, don't worry about them). They are broken up in 2 groups: alife_*****.ltx, and way_*****.ltx. The files that we are interested in are alife_****.ltx. Now, you can simply open them as you would any .ltx file (any text-editing program, i.e. Notepad).

This is what you'll get (this is the CoP version): 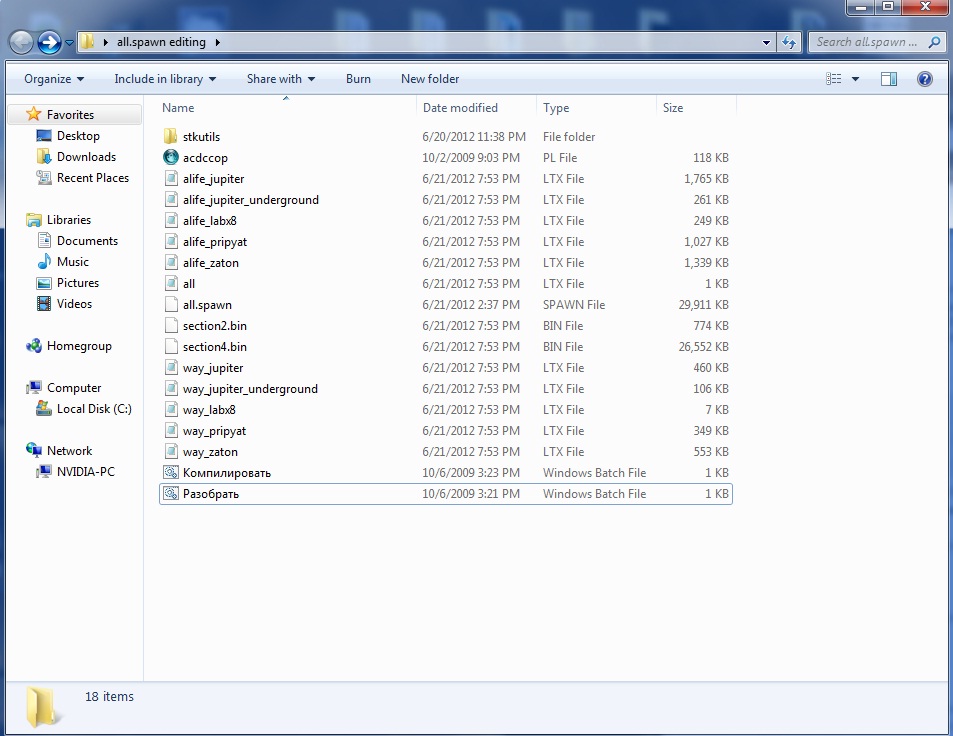 Link at the end of the tutorial on how to edit alife_ and way_ .ltx.


So after you're done editing the files, and are ready to put back your new all.spawn, double-click the Compile.bat we created earlier. A command prompt window will appear again, so just follow it's instructions. After, you will get a new file called new.spawn. You have to copy that file to *Wherever you installed your S.T.A.L.K.E.R. game*/gamedata/spawns. Don't forget to back up the original all.spawn file! You're now done. Good hunting, stalker!

By the way: for Polish speaking modders, you can go to mod.stalker.pl, there's a number of tutorials in Polish there :)

I can't decompile the all.spawn file because it says script file "acdc.pl" is not found, even though it's in the folder. It's really frustrating. What do I do?

I know I am incredibly late (5 years, woah), but for someone else having this problem, here is the fix:

You have to have ActivePerl installed and to have it be set to open up all .pl files. I was really frustrated too at first and I couldn't find any fix for this, but somehow by trial and error it just worked after I done this.

I have gotten it to work recently, no one really makes any good tutorials these days. By the ways, I have not logged in for 5 years either I don't think. On a side note though, there is no hub or up-to-date site for modders to use regarding S.T.A.L.K.E.R. The SDK mod portal website has just about all of its tutorials based upon SoC, CoP coding and data have changed dramatically. This means that if you are modding CoP, that website is hardly of any use besides few references, otherwise getting knowledge is unreliable. Doesn't mean you shouldn't try though.

'perl' is not recognized as an
operable program or batch file.

I have ActivePerl installed, it's in C:\Perl64

It would appear I have to put acdc.pl, decompile.bat and compile.bat in the same folder as Perl64. Doesn't say that in your tutorial.

However now I get this:

Solved it. Newer versions of ActivePerl are ****. Installed an older version and now it works. However now I'm having a problem with the classes.
Initially I got this:

Expected, there's probably loads that Lost Alpha v1.4007 has added. So I added:

That worked but now I get this:

I know how to add more classes but this error I have no idea. What does this mean?