Four years have passed since the Shaper's defeat through the use of Archfire. During that time scientists, dragons and inventors have tried to find a way to counter the mysterious deterioration of the portals - in vain.

The portal network has now totally collapsed and the islands are cut off from one another. The dragons and the Shaikan act as the only connection between the races, but even their resources are limited.

Now, with the nations isolated from one another, a new nameless enemy strikes. Eo is completely at the mercy of the attackers ascending from demonic depths.

In the midst of this chaos a new hero appears. A simple Shaikan and a member of the hand, he searches desperately for answers to his deeply disturbing dreams. This search leads him to the ancestral home of his people, the Iron Fields, to the mountain of the Patriarch Ur. The elders can only tell him that his dreams are connected to his destiny, but nothing more.

Upon arrival all he finds are more questions: Who are these demonic creatures the locals are calling the Nameless? What do the dragons know about the destiny of this world?

And what has Professor Twiddles plan to restore the portals to do with all this?

To discover his destiny, our hero must acquire new skills and do battle with enemies new and old. But wherever he goes - the Nameless always seem to be a step ahead, and futile battles break out in which the hero holds the destiny of all of Eo in his hands.

Spellforce 2: Empire of the Shadowtrail is an epic Campaign mod for Spellforce 2: Demons of the Past, which offers 8 huge, completely new maps. They're full of adventures, quests and mighty enemies. "EofS" mod is my fourth mod for Spellforce 2 and it's probably my last one, so I hope this mod won't dissapoint you, since I made it with lot of effort! ;)

When the Alyah died and the Empyria started to collapse, the alchemist Lorion Shadowtrail took over the Empyria and started the war in Xu and Fiara. Westguard, the shaikan town was at a chaos since the town was occupied by Redmond, who became a king of the Highmark after Ulf's death. When the Westguard was almost demolished by the Realm, Emperor Lorion came to Westguard and stated, that he will protect the shaikans and fight by their side. Shaikans thought that they had no other choice but to accept Lorion's help. But it was a huge mistake shaikan's ever made. Emperor imprisoned the shaikans and took over the control of the Westguard. General Redmond became angry at Shadowtrail since he stole the lands, which Redmond wanted to control. King declared the war against Empyria.

The lands of shaikan were devastated, shaikans needed a hero, who could stop the war and save them... Play as a shaikan, who managed to escape from the war in Westguard and take a revange on Redmond and Shadowtrail, who had destroyed your homeland! 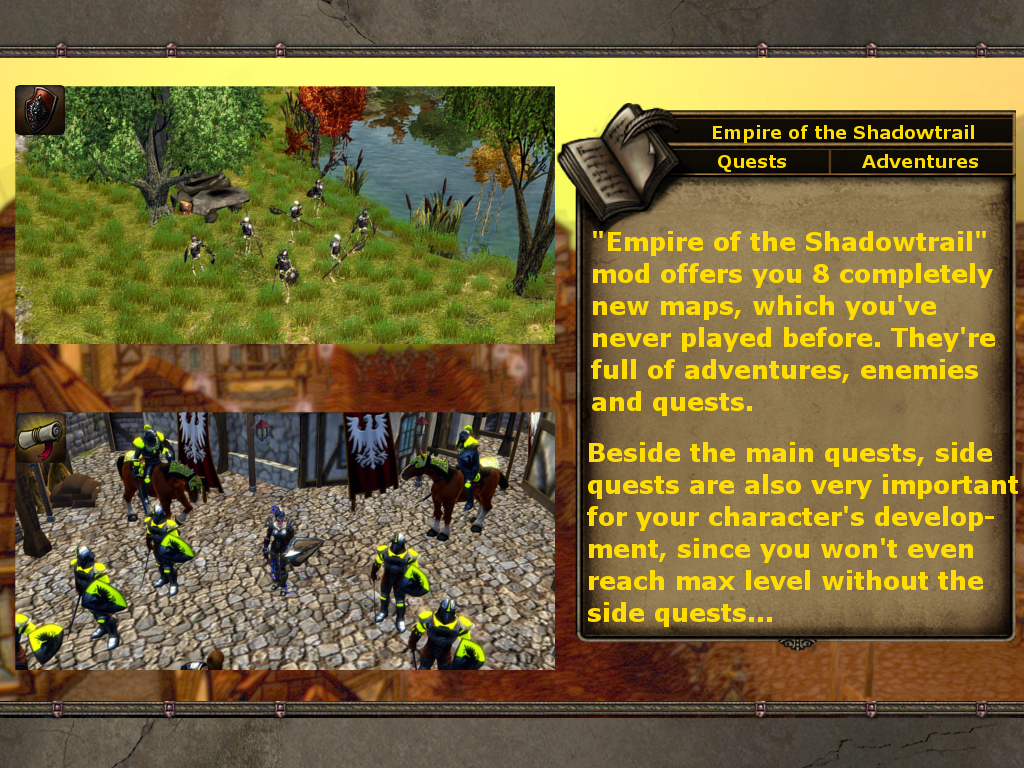 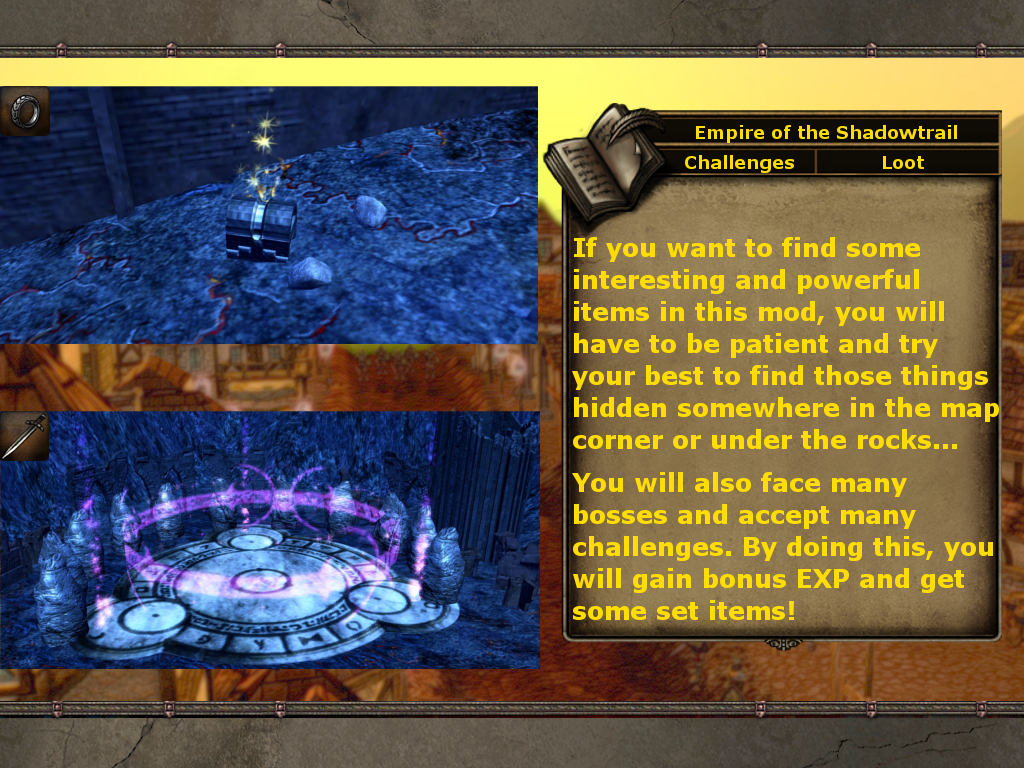 Hope you enjoy this mod and don't forget to write a review! ;)

Prologue "Empire of the Shadowtrail"

This is a prologue story from my newest mod 'Empire of the Shadowtrail'.

SpellForce 2: Empire of the Shadowtrail out on 2016

The campaign mod for Spellforce 2 is going to be released in 2016!

DEMO version of the 'Empire of the Shadowtrail' mod is available to download, mod works on Spellforce 2: Demons of the Past.

Plans for 'Empire of the Shadowtrail' mod

The mod 'Empire of the Shadowtrail' for Spellforce 2: Faith in Destiny and Demons of the Past is going to be released in summer 2015, DEMO vesion for...

This Setup will add the community made map "Bargagor" to your game.

This is a collection of Maps and Mods for SpellForce 2 Faith in Destiny.

Empire of the Shadowtrail (full version) (2016)

'Empire of the Shadowtrail' is an epic Campaign mod for Spellforce 2: Demons of the Past. It offers 8 huge maps full of adventures, enemies and quests...

'Empire of the Shadowtrail' is a Campaign mod for Spellforce 2: Demons of the Past. This is the DEMO version for this mod, it includes the first map...

Harbingers of the Decay (FiD version)

"Harbingers of the Decay" is Campaign mod for Spellforce 2: Faith in Destiny. This mod includes 8 maps full of adventures, quests and many enemies...

Harbingers of the Decay (DotP version)

"Harbingers Of The Decay" is Campaign mod for Spellforce 2: Demons of the Past. This mod includes 8 campaign maps full of adventures, quests and many...