How can I play Myth?

To get started with your first experience of Myth, download the free Myth II 1.5.1 Demo and fire up a new single player game.

Once you've had a taste of the carnage on offer, you'll want to try your hand online. You're actually already set up to play on MariusNet as a Guest, without having to register. So just open the Multiplayer Game menu, choose your name, team and colors, then click on the Guest button without entering a password.

If you'd like to be able to have a custom name, or keep track of your games you'll need to register for an account. You can do that on the Mariusnet Website

If you can't find any open games on MariusNet, you could always register for an account at PlayMyth.net before hitting their server for some games. You'll need to switch to their server in-game as well using the Server button in the Multiplayer screen.

The Myth demo runs on all modern operating systems with the following minimum requirements: 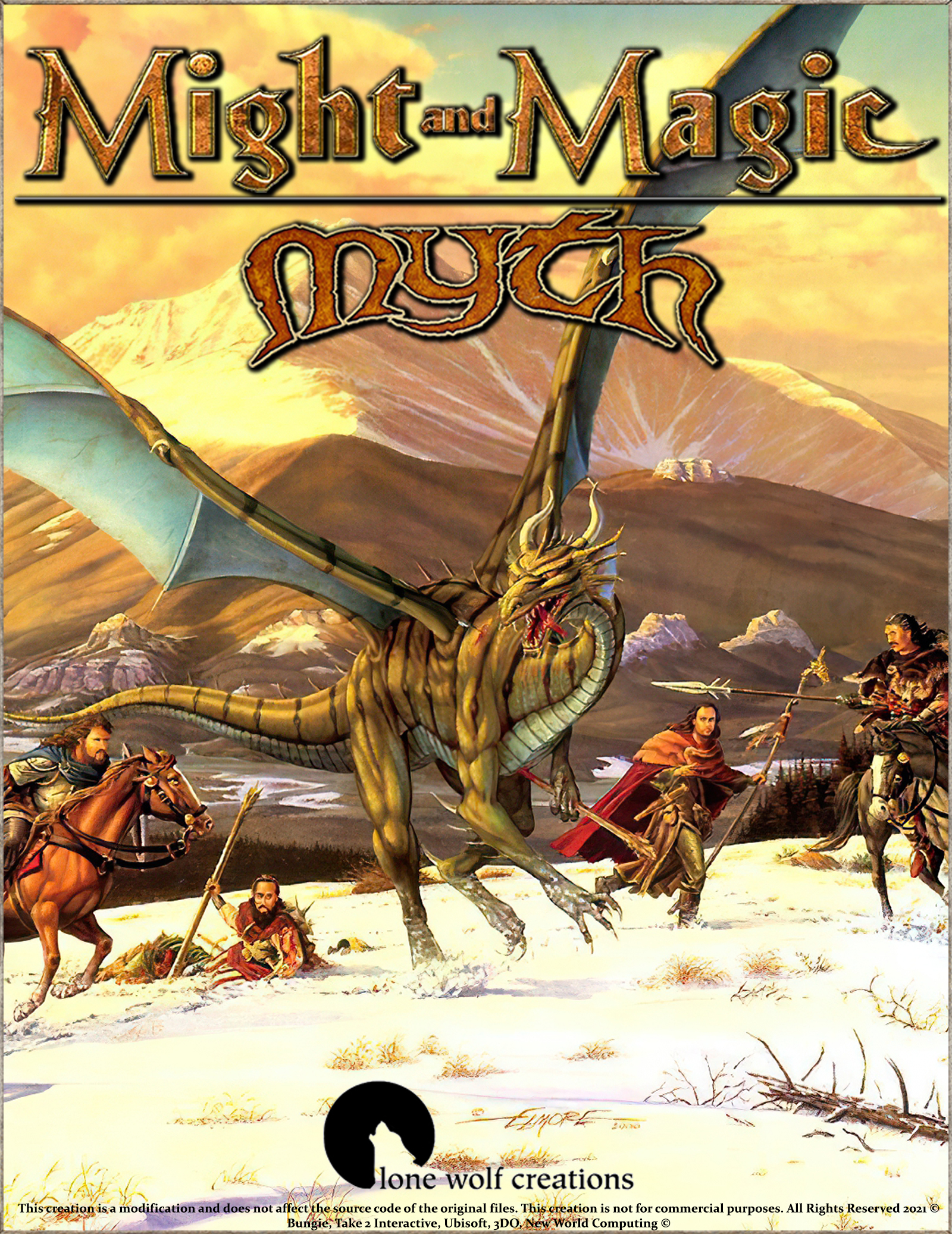 Link to the Mod DB page

Might & Magic: Myth - this is a modification based on the Might & Magic universe, developed on the game engine of the game Myth II: Soulblighter from the studio Bungie. The main feature of the modification is the port of resources from role-playing and strategy games of the series Might & Magic.

Return to Antagarich in search of an adventure in a Might & Magic universe you've never seen before.
A completely new look at all the beloved "Heroes" and RPG "Might and Magic" in the genre of "real time strategy". The player will have 4 difficult levels of a single player campaign, in which the player will be able to play as: Knights of Erathia, Monsters of Nigon, Sorcerers of Bracada and Necromancers of Deia.

The modification contains both a single player campaign and multiplayer:
v Single player campaign consists of 4 levels (+ training);
v Multiplayer consists of 3 maps: 2 maps recreated from scratch from Bungie and one from a group of cartographers;
v In total, there are 23 new combat units in the modification;
v More than 10 spells and artifacts that your units can use;
v Great soundtrack by Paul Romero and Rob King, both from Heroes of Might & Magic III and Might & Magic VI and Might & Magic VII;
v Destruction: trees, plants, bushes, grass. The player will be able to really smash everything that is on the level (well, almost).
v All stories in the presented campaigns do not depend in any way on the main plots of all games in the Might & Magic universe. The modification features different stories written by the modification developers themselves. 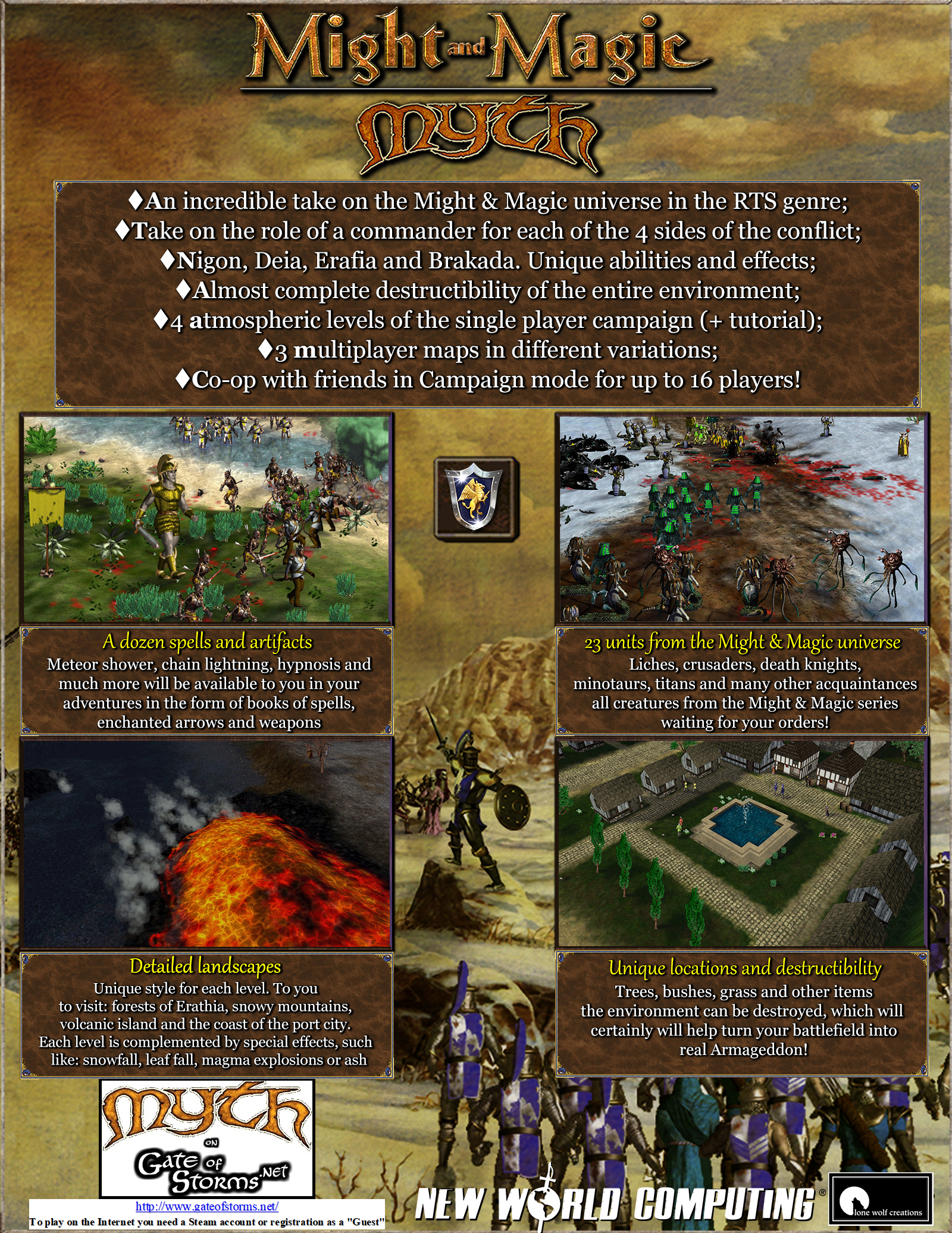 Yesterday saw the latest iteration of the Myth 2 Demo. Download it today!

Because some things are free, not everything is perfect the first time round and also Fred.

A nostaligic and yet modern look at the Myth series and what you can do with it...

This is an updated Linux (x86) demo of Myth II: Soulblighter. The demo includes four levels from the Myth II solo campaign and an additional two multiplayer...

This is an updated demo of Myth II: Soulblighter. The demo includes four levels from the Myth II solo campaign and an additional two multiplayer maps...

This is an updated demo of Myth II: Soulblighter. The demo includes four levels from the Myth II solo campaign and an additional two multiplayer maps...

The MacOS X version of the Myth 2 1.8 update. Should work with all versions of OS Classic from 8 to 9.x.

The Linux version of the Myth 2 1.8 update. Should work with whatever X86 Linux flavour you have chosen to use, maybe some others as well.

The Windows version of the Myth 2 1.8 update. Should work with all versions from 98SE onward.

This game is awesome!

Game name is wrong, tis Myth 2 soulblighter, not Project Magma. I messed up when submitting the profile.

A cult classic sequel to another cult classic: Myth: The Fallen Lords.
The very ancestors for all 3d games.
It's greatest features are:
Flawless physics and SFXs, extremely talented voices, exceptional music from Martin O'Donnell and Mike Salvatori, and an UNIQUE storyline unmatched to date.

It's a shame they never made the planned fourth game.