Shadow of the Eternals

A psychological horror game, Shadow of the Eternals is the spiritual successor to Eternal Darkness: Sanity’s Requiem, being developed by the original creators of the popular and critically acclaimed classic. Featuring an eclectic cast of heroes and villains, Shadow of the Eternals will span thousands of years of history with an H.P.

Shadow of the Eternals is:

The Great Cthulhu’s time has come: A new Cthulhu game is coming, simply entitled Call of Cthulhu. Developed by Frogwares and publisher Focus Home Interactive. It was announced over Twitter.

Are you sick to death of the dead? The mewling, loping cannon fodder that couldn’t even die right. They are always sold as the endemic threat to human life but what they have become is the plague that has infected every corner of human culture. Every blockbuster season has to have a couple of zom-apocalyspes. TV shows are filled with them, even the fantasy ones. Any AAA shooter game needs a mod with them, even the Star Wars canon bares the taint with dead troopers raised by space orchid potions or something. Harry Potter is probably the last big cultural icon without them.

We still need bad guys. Monsters and villains that strike fear into our hearts, yet are easy for us to dismember with hatchets and heavy ordnance.We have to raise the bar and instigate a change. We need something more revolting than flesh eating zombies and more terrifying than blood sucking vampires. Yet perhaps we shouldn’t raise the bar, perhaps we should lower it: look into the depths, deeper than a grave, darker than a cave. There has been a slow rumbling coming from the depths of geek culture for quite awhile. The rumbling of a sleeper awakening as the stars begin to align. 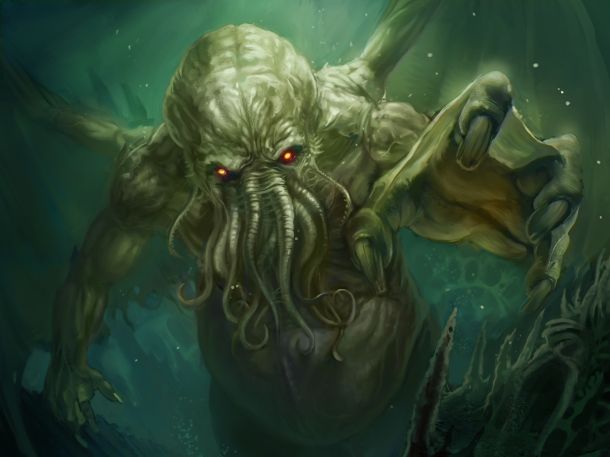 There's a heap of cool Cthulhu art out there. This one is "Cthulhu Rising" by Jeff Himmelman.

Note: For those that don't know, H.P.Lovecraft didn't leave the rights to his novels/universe/mythos, so its public domain that anyone can use or create content for. You can get all of his works online for free! In fact a free online magazine publishes new Cthulhu mythos on a regular basis, writers that know and care about the source material.

For the uninitiated, the Great Cthulhu is a ‘fictional’ mythos that sprung out of the beautiful mind of a 1920s horror pulp writer called H.P. Lovecraft, who was a friend of Conan the Barbarian writer Robert E. Howard and other great luminaries of that era’s outpouring of genre writing.

Lovecraft was one of those geek archetypes that we are discovering as we look back with the benefit of modern sociology. He was brilliant and homeschooled, a fan of chemistry and astronomy before he was eight, and he was even a proto-blogger: self-publishing science ‘zines on hectograph blocks. He was a prodigious correspondent with all the genre and pulp writers of his day and first got noticed in debates in the letter columns of pulp magazines.

Unfortunately he also had a grandfather that read him gothic novels, a syphilitic father, a hysterical/depressive mother and a sleep disorder that filled his sleep with horrendous visions that he called “night gaunts”. Or perhaps fortunately, because in the ‘20s he started to write a series of horror stories for the now legendary Weird Tales, and through them he began to sketch out his strange vision.

He wrote stories about hapless folk falling foul of the Old Ones who ruled earth in prehistory but had sunk down to the abyssal depths or faded out into colourless space. Creatures of immense power, incomprehensible motive and inconceivable geometry who wait timelessly, with agents both human and inhuman working to bring about their return. Agents who were motivated by power and greed into spreading corruption of the flesh and soul, they use arcane relics and ancient wisdom to bless themselves with fortune and to live abnormally long lives. Their power was drawn from unholy partnerships with unspeakable horrors that push at the borders of our reality. Horrors so indescribable that even the sight of these creatures is enough to warp the mind and shatter the soul. 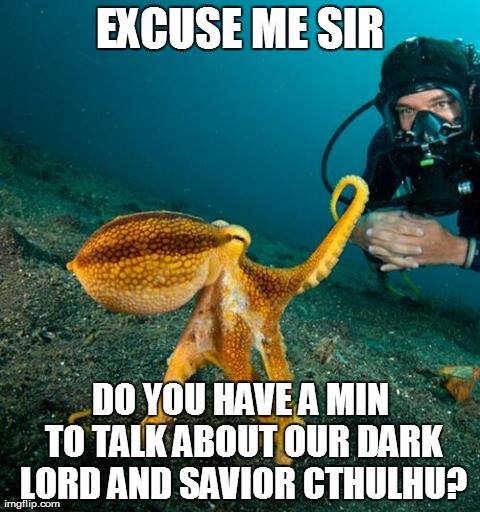 Actually, sure, tell me more.

Facing these unknowable terrors are brave and forthright intellectuals, such as the men and women of Miskatonic University who go forth in the spirit of scientific endeavor. They aren’t Indiana Jones academics, with leather jackets, automatics, DC3s and hot Nazis. They go forth with nothing more than travel cases full of arcane texts and a misplaced interest in genealogy. They do battle with desperate men, they discover disgusting creatures, they’re sent right over the edge and they’re usually killed in horrible and bizarre ways by the creatures without shape. If any do return they are usually decimated husks of their former selves, babbling about cities without edges, space without colour and/or lands beyond thought. And with a serious aversion to calamari.

So if Cthulhu is so great then why isn’t it already a mainstay of pop culture? Well, it actually kind of is. Over the years Cthulhu has gradually spread its tentacles into the mainstream, becoming a slumbering behemoth underpinning many pop culture favourites. Lovecraft invented the town of Arkham and the name was appropriated for Batman’s asylum. The Necronomicon, the bible of the mythos, has appeared in everything from The Evil Dead to Teenage Mutant Ninja Turtles. South Park used Cthulhu for its Coon trilogy, offending on several levels as always by using him for the weirdest Totoro parody imaginable.

The biggest tip that Cthulhu’s stars are aligning can be seen in one of this year’s blockbuster films: Pacific Rim. Forget Evengelion comparisons, Guillermo Del Toro’s mech-fest is powered by a thinly veiled Monster Movie version of the Cthulhu mythos. Del Toro was pitching Mountains of Madness, one of Lovecraft’s key Cthulhu texts, before starting Pacific Rim. Geek theorists claim that if Pacific Rim brings enough cash in, he’ll be given the greenlight on Mountains. Another reason to go see it, apart from watching Gipsy Danger punch the colourless lights out of Elder Gods, obviously.
We've seen a more faithful adaption like Dagon, but not much else like that.

Gaming has a fine tradition of pillaging the mythos, starting with early text adventures which were a perfect fit for Lovecraft’s wordy moody milieu. Yet the birth of the shooter still has his taint with both Doom and Quake name checking Cthulhu critters. We have some obvious connections in The Secret World, and WoW had C’thun - a great tentacle god who slept in the ruins of Ahn’Qiraj - and multiple reference to Charles Dexter Ward. Even sci-fi isn’t safe, Magrunner is being promoted as ‘Portal against Cthulhu’. Call of Cthulhu continued the tradition, adapting loosely the story of "The Shadow over Innsmouth" and giving us a scary and (if not buggy at first release) FPS.

But the greatest achievement of all is probably by far, Eternal Darkness: Sanity's Requiem. It adapted the sanity system from other some other well known horror titles and went in a very innovative direction. It produced all these strange effects that scared people for real at the time, made it seem like the game was glitching, mimicking hardware failure or a faulty television set, when in fact it was just your character going insane. It took gameplay elements from other genres like RPG's and third person adventure titles and expanded upon all the stuff that survival horror was typically bad at (like really fluid and tactical combat, logical puzzles as well as camera angles that never blocks your view). Theres even a sequel in the making for Windows and PS4. The great sleeper is awakening, but we need more.

If you haven't had enough theres a couple of fan created mod content: 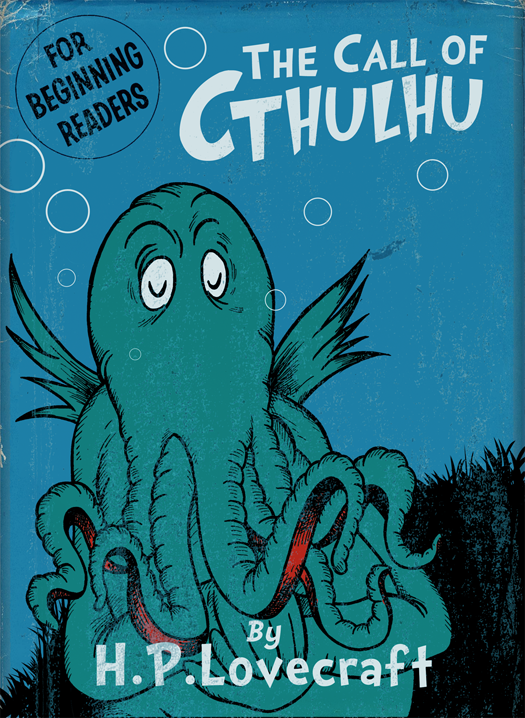 DrFaustusAU has created a Cthulhu book in the style of Dr Seuss. Follow the link to read it!

So in anticipation of the this game title lets think, how does Cthulhu finally get its due? Well, like any ancient evil there is the classic three step plan to return them to their rightful rule over our plane of existence:

1) Intone his unholy rites and read Lovecraft. It’s a reward in itself, somewhat dense and purple prose-y for our modern sensibilities, and with the occasional shocking 1920s casual racism*, but worth the effort.
2) Invoke his name – tell your friends about the awesomeness of the mythos.
3) Turn you back on false gods – stop buying zombie stuff, you’re just encouraging them.Follow these rites and we will rid ourselves of the dead and welcome a greater time of tentacles and sanity loss**. A new era where the reason you are afraid of the water isn’t because of Shark Week it’s because Dagon is down there. Where you don’t care about how to zombie proof your house because the thing you’re afraid of doesn’t obey your “Euclidian geometry” rules, so walls are pointless. Where your meme generator says “Stay calm and cthulhu fhtagn”.A better day, a deadless day, the day of the tentacle.

(Unless ‘Mechs are the next thing. ‘Cos TitanFall looks great, and I’m totally okay with that so long as we still get rid of the damn zombies.)

* Be warned Cthulhu isn’t all post-modern, post-feminism, self-reflexivity that you get with zombies. Lovecraft was an old time, folksy kind of racist. In that way that we think is so interesting when it’s in Mad Men, but is shocking when Lovecraft’s hero has a black cat and names him ‘N****r Man’.
** Remember when sanity loss was a game mechanism in F.E.A.R.? Cthulhu again, it comes from the Roleplaying game “Call of Cthulhu”.

It looks fantastic, so glad this classic will finally be receiving the follow-up it deserved!

Indie
Tags
Embed Buttons
Link to Shadow of the Eternals by selecting a button and using the embed code provided more...