Rolling survival is a top down wave survival game with an upgrade tree. it really is as simple as that, you kill enemies to get experience and with that experience you can buy weapons, upgrades and additional health so that you can survive longer. On the map there are also teleporters which cost experience to use but can provide a quick escape. There are 3 modes: Classic, Arcade and Hardcore. Classic is the original concept for the game, you can take a bit of damage and you have access to all the upgrades. There are 28 unique upgrades split into 6 different trees, each one with a different purpose, whether mobility, damage or health it is up to your to try and find the tactics that suit you best. Arcade is a more symmetrical map, and you gain upgrades via powerups, you also have multiple lives without an upgrade. Hardcore is classic but much much much harder, you have less health and you get less experience per kill meaning you have to choose your upgrades much more sensibly.

Thanks for voting and helping Rolling Survival on it's quest to become the 2022 Indie of the Year. You are now in with a chance to score some free games. Help this game secure more votes by embedding the widget (or link) we have included below on your favorite sites.

Linux support and the unfortunate future of Rolling Survival

The linux version of Rolling Survival is now live and working, unfortunately the resolution is locked at 720p, which was something that I was intending to but seems unlikely now (read second half of article). But the game works, and pretty well apart from a CPU spike during the tutorial level (that goes away if you shoot a few of the drones). Apart from that though it seems to be working splendidly in 32 and 64bit :). 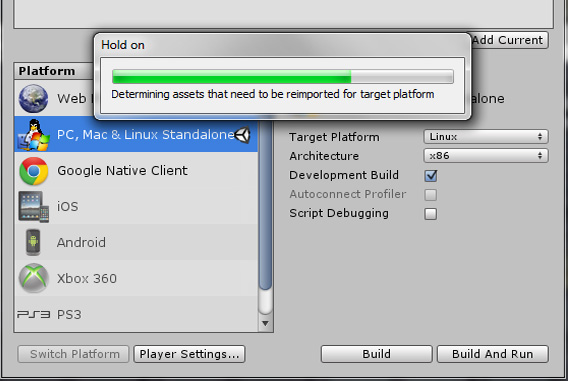 The Corruption and RS's future

So last night my game file corrupted, and I have no idea how to fix it, let me get more specific.... After building my Linux version of the game I shut down to launch my Ubuntu partition, anyway... as unity was saving during shutdown my laptop died. I think it may have been my faulty battery. Anyway when I relaunched the windows it said there was a disk error and it needed checking so I let it and it cleared away some corrupt parts of the disk.
When I next launched unity (the engine I use to make RS) I was given an error that guidmapper (a file within the system of unity) was broken and I should delete it and relaunch unity, I didn't delete the file but i moved it to my desktop and relaunched unity. The folder than contained all my resources was empty (even though in the file system the files were still there).
Turns out this same thing has happened to all of my unity files. Nothing has been assigned so nothing has textures, models and all the script roots are marked as null.

So I use dropbox to back up my files, the bitch of this being that when my guidmapper got corrupted it synced the corrupted file meaning my backup is mashed as well.
I had one version on an external drive from back in November but i honestly cant bring myself to do the last 2 months again. This brings me to a summary, seeing as I have a good build out that seems to work and could act as a complete game that is what I am going to call it.

I cant bring myself to start from 3 months ago. The whole thing is still a bit raw but i am so angry with myself for using a sync to back up my game.

So angry at myself

A top down wave survival game with an upgrade tree, you kill enemies to get experience and experience buys things.

I have been busy and am happy to announce that we have a new trailer, Some new music and are drawing closer and closer to beta.

Linux and Linux64 are now supported for Rolling Survival.

Upgrade Tree - With a Webplayer link

Thought I'd post a link to the finished upgrade tree so you have have a look and give some feedback. The tree is divided into 6 different specialities...

Upgrade tree is to small and basic.
MAke it bigger and more advanced then maybe.

Seems really interesting. A GNU/Linux version would be great.

The linux version is already uploaded, just wating for approval :) Just a warning.... the version I upped is locked at 720p, the next update will fix that though :)

Just tried the Linux64 alpha and I must say it's quite fun and challenging.
One thing, though, when using Blink (on the tutorial) CPU usage jumps to 100% and never goes down. Can anyone replicate this behavior or is it just me?

yep, unity freely exports to linux so will be supported :)

ok great! i'll be tracking this