You are a resident of a small village inhabited by monsters, the times are peaceful as the war with humans has come to an end long time ago.

One day your village receives a message, that one of the big shot monsters has started gathering an army and even managed to destroy one of the human settlements.

The folk of your village don’t like the possibility of war especially because your village is positioned right between that monster castle and human kingdom. To solve this problem village elder sent you to negotiate with the human kingdom so the conflict won’t reach your village. On your way there you have to visit closest friendly human settlement to get some help in the negotiations with the king.

However it will not be easy as on your way to the kingdom you will have to go through territories of leader monsters that want to make war, and, if possible, to talk them out of the war. After all even if they won’t accept human ambassadors they have to at least listen to one of their own kind…

Overlord Trouble, start of the campaign

Good morning, day and evening dear readers! We're happy to tell you very exciting news: we're starting our Indiegogo and Steam Greenlight campaigns! In two weeks after publication we will provide demo version of the game for you to get to know it. This, for us, will be a huge step into the world of game industry.

Game summary: World of Overlord Trouble – is a fictional universe by name of Veltiona, where two fractions: Humans and Monsters live together in peace and harmony, but a very long time ago these two races had waged long lasting and murderous war among themselves.

Many people and monsters had died, each of warring fractions lost many lives. Veltiona was falling deep into the darkness. Nevertheless leaders of the two conflicting parties found forces to put an end to it and Veltiona found hope for peaceful existence.

Still not everyone liked the current situation. In deep, most remote and dark places something evil was about to happen. Uncover the conspiracy, find loyal friends and trusty allies, vanquish the Evil and bring peace to Veltiona once more, all in the game of Overlord Trouble!
Links to Greenlight is in description.

First boss of Overlord trouble readies himself for the incoming fight.

This article is about the first village of this game and the work that had been done to it. 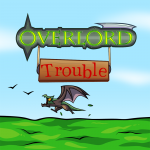