‘ORION: Dino Beatdown’ is an Open World, Class-Based Cooperative Survival Sci-Fi FPS. The game puts five (5) players together in huge, endless environments in which they must work together to accomplish objectives and survive the devastating Dinosaur horde.

Players earn in-game credits which can be used to upgrade their abilities, purchase new weapons, unlock weapon upgrades and call in vehicles in order to ensure survival.

Experience the future as never before. Make use of Jetpacks, Medic Guns, Cloaking Devices and equip yourself with state-of-the-art weapons ranging from Shotguns, Machine Guns, Rocket Launchers, Laser Rifles. If that isn’t enough then simply tear up the environments in a number of vehicles ranging from Hover Bikes, Buggies, Mechs, Tanks and VTOL’s.

Here is the big update! We have had one crazy month what with the first release and everything that followed. We have been working hard this month getting out hotfix updates (1.1, 1.1a, 1.1b, 1.1c, 1.1d) to help square away a few key issues and we have already made over 100 tweaks, changes and adjustments via five patches. You can view the full list of changes here.

We are currently working on one last patch aimed to come out this week (1.1e). We are also working on the first of many major game updates - the Title Updates. 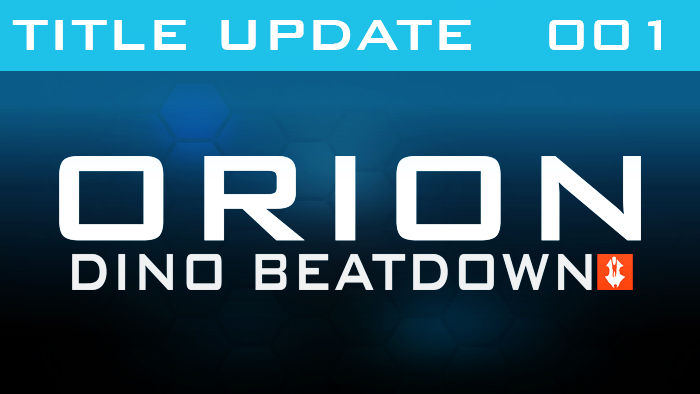 Theses are the large updates that will significantly shape, sculpt and add content to the game for absolutely no cost what-so-ever. The biggest additions for Title Update 001 include:

Due to some of the issues that plagued our initial launch we had extended the Launch Discount (10%) for an additional week. On top of this we have worked with Steam to do some incentives for all of you folks who have bought the game all the way up until the first Title Update is released! So if you purchase 'ORION: Dino Beatdown' between May 4th and July 1st you will receive the following items:

We put out Version 1.1D late last week and it is now live. This was a quick fix to help aid some peformance issues as well as incorporated some major additions including:

We are aiming to get a Version 1.1E out this week and then it's on to full development for Title Update 1.

We are extremely proud to announce this next segment. We have been working very hard for many years to get to this point and most importantly we have achieved it independently. While it won't be large off the start by any means, we will be filtering in (roll-out) over the next year and two.

What does this mean? We will not only have the key developers in the same country and time zone - but in the same room. We will be faster, more efficient and better communicated among one-another. This means faster updates for you guys and just an overall level of polish.

TO APPLY:
Send application with a resume, CV and work examples to:
jobs@spiralgamestudios.com

We are extremely proud to announce that the first version of ORION: Dino Beatdown has been officially made available via Steam today!

It is with a sad notion that we must announce a slight delay for the OnLive version of ORION: Dino Beatdown. We have been working feverishly these last...

We are back with one hell of an update. March has been absolutely insane with GDC 2012 kicking it off on top of pumping away at ORION: Dino Beatdown and...

We are back yet again! This time we come bundled with the first of a variety of Video Documentaries (VidDocs). Today we are giving a much more in-depth...

it is very saddening how probably many people probably havent even launched this game after all the fixes have been applied to it.

I received this game as a free gift, tried it, and now I have only this to say....

EDIT: I tried the game with the latest critical fix patch, and now its somewhat enjoyable. Everything seems to be pretty much fixed, although gameplay still could be improved...

Just In case you don't believe me, hopefully this article helps.
Cinemablend.com

Wish I could get a refund.

Luckily, I got the game for free. I feel sorry for everyone who dropped money on this game. You guys deserve refunds and slices of cake.

How come when I tried to install it on my mac it said, "ORION Dino Beatdown is not available on your platform"?

Simply because, like many other Steam games, they're only availible on the Windows Steam platform.