Well when i came back to MechCommander 2016 i found the game in very bad conditions. Good thing was, that a modding community on NoGutsNoGalaxy focused (around 2013/14) on MechCommander for some time. Although the MechCommander extracted source code was released (partitionally complete) on GitHub - mostly done alone by IronArthur and Scrivener07 in 2012.

2020 now we have the best modding conditions for MechCommander, that ever existed. On the base of the modding knowledge above i have created another standalone for MechCommander called Darkest Hours (v4.2). MCG Darkest Hours combines all previous common standalone versions into one built containing two Extra Large XXL campaigns overriding the Original and Expansion campaigns from the game. Instead of 42 missions total from the original game - you can play 131 campaign missions total! In addition there are several optional updates & patches available for Darkest Hours and the biggest solo-mission map pack - that ever existed. The Fullversion of Darkest Hours exists since 2018 on modDb and was downloaded about five thousand times yet. The Original version on modDB since about 2015 has not much more downloads anymore. So the game itself evolved in an awesome way! The modding knowledge is still a problem - cause at the moment i think i'm one of the last guys on earth knowing how to do this stuff - beside some rare other persons who know more about this old gem.

When you are just a player - interested in playing retro RTS isometric 2.5D games - you can stop reading this article at that point. See the links above and find your gaming content! You have the ability to choose from several standalone versions containing multiple solo player campaigns for MechCommander and different modded game content. All this stuff was released for you and for both - poor and rich!

Have fun, that's an order! 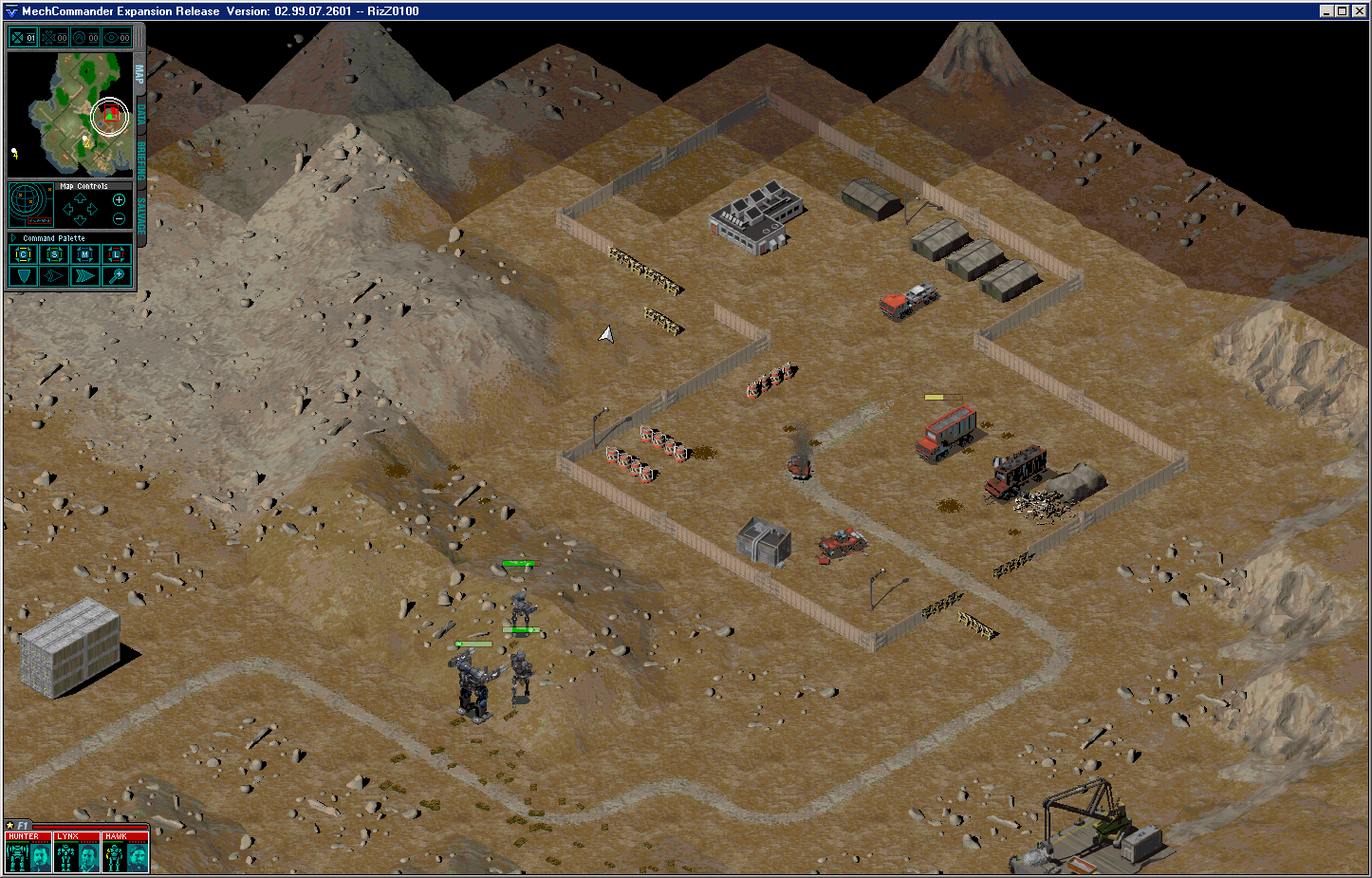 Oseparovic on GitHub: If you'd like to extract the files yourself, several utility scripts have been written by scrivener07 (which I shamelessly tweaked) for this purpose. The scripts are located in the extraction_tools directory. To extract a source file, simply place the source file in the extraction tools folder and run the corresponding script and enjoy! The necessary Cmunsta extraction tools are already in place so there's no need to do anything else.

You can do your own file type discovery. Many files still don't have an extension because their type cannot be determined. A lot of the research here was done with TrID Readable/Extractable formats marked in bold

Here's a list of the project structure and what you can find and where:

A Mission/Map on MCG has 2 parts:

Mission: Directory: DATA/Missions. it has 2 files, MCX0101.ABL & MCX0101.FIT, the first one it´s a macro script file that has all the "special" stuff that has to happen on that mission. The fit file it´s the text definition with all the variables of the Mission, and one of the variables it´s the name of the terrain file "st TerrainFileName = "MX0101"".

So wayback in 2016 this site left me back with mixed feelings. They released the extracted source but the files itself - i mean how they where left by it's creators - where a mess. While analyzing the source code you can obviously see how much pressure the development team might have had. On many places the code looks like typed in - in a rush. Many files have no clear naming conventions - or some files simply have any file names - they are just existing as the code that where typed in and compressed later. Refiguring out how this all works was a nightmare to do. But even here it was a big advantage using the knowledge and modding content i found above. Now i show you the tools which are used in my whole modding process - to make it easier or faster - or just doing things with automatic processes that would have last years when you would type in any code single handed on your own.

...all things that are needed to start modding MechCommander:

... Modding Knowledge you must read before understanding:

Notes:
- Data in the FST is in compressed form (typically), the compression used is a Lempel-Ziv variant
(looks to me like an LZW). I'm not sure if this is in fact the case. Sort of redundant now as
the compressor and decompressor code ripped out of the game executable is working fine.
(see lzcompress_asm.c and lzdecomp_asm.c respectively).

- DPK files use the exact same format as FST file. In short, a DPK *is* an FST file.

- In a DPK file, I have yet to see any compressed data, while in the FST, it most definately is compressed, but it doesn't have to be.

- An FST (and hence also a DPK) file can be seen as a sort of virtual drive with a single directory in it.

- In both the FST and DPK files, the path to the file (relative to the game root directory) is stored with the filename in the TOC. This means that we could technically extract all files from the FST, delete the FST, and still run the missions as long as all the files extracted were in the correct locations. This seems to be born out from when we create DPK packages and extract the FST on another player's computer. I haven't tried this with the full mission campaign file though.

- The MCExtractor tool normally used to extract files from a DPK actually looks for a single *.FST file and a single .SOL file within the DPK. If this is not the case, MCExtractor will refuse to work with the DPK. Further, MCExtractor does not appear to be able to handle compression, this would then seem to be the reason why DPKs are never compressed. These factors should be kept in mind if attempting to create your own DPK creator using the information in this document.

xxxx xxxx Data for the FST/DPK (Starts immediately after TOC)

For solo mission DPK files, there are only two files. First is the .SOL file for the misson, and then the actual FST file.

For solo missions, the following files are put in the FST file:

The names listed below assume the mission is called "name". Likely we only need one campaign file, the others are individualized for each map. The campaign name (likely) needs to be the named after the FST & SOL files, but the rest can be anything at all as they are referenced from within the campaign file. (order of files within the FST/DPK doesn't appear to be important).

When using the editor to create a DPK file (which also creates the FST for inclusion in the DPK), it internally renames all the names except for the file "campaignXX.fit" whose name remains intact and takes on the same name as the FST file itself. e.g. if you made a mission map called TEST, then the FST file the editor creates will be called TEST.FST, the SOL file will be called TEST.SOL and the campaignXX.fit file will be called campaignTEST.FIT. All the other files are referenced from within the campaignTEST.FIT file or one of the other files and so these files are automatically changed to some UUID number instead of TEST. This is why we get strange long filenames in the FSTs. But a simple test I made shows that the UUID names are not required whatsoever. if we simply packed all the needed loose files the editor creates for the mission (as noted above) into an FST file, and used the appropriate SOL file, the mission will run just fine.


This ive got from cMunstas notices of a simple txt file between all of his MCG Tools and Tutorials.

He also mentions the importance / role of dpk files in his campaign building guides.

CMunsta's MechCommander Gold File Format Notes (revision 2) [Make sure word wrap is on. You may need to also widen the window]

The following is just a bunch of notes I kept (and fixed up a bit) while working out how to get access to the MechCommander files. I was doing this mostly so I could try to figure out how to get a user made campaign going (the little info available that I could find is both woefully old and sketchy at best). While making these notes, I created a few simple tools so that I could gain access to these files. Therefore, the notes presented here should at least give enough information to recreate the tools (or preferably better ones) except in the case of the compressor and decompressor. For these routines, I went and found the appropriate code in the game executable itself and hacked-out versions of these routines so that I could use them in the creation of my tools (or any other tool for that matter). Anyway, for those that could use this type of information, I hope this is usefull for you. -CMunsta

Each entry in the TOC is a single DWORD in size, which contains the offset where the data for this entry starts. A value of 0xE0 in the high byte of an entry indicates that the entry does not exist or has been deleted.

I hope this way more people are enlighted & may get attracted to give it a try. MechCommander is worth keeping it alive and caring for. And the result of your work may do more fun than the original - when you did right!