There is a problem with interplanetary civilizations: developing them takes more resources than a single planet can offer, and sometimes even a planetary system is not enough. Especially if you have competition.

In distant cosmos, two sister planets have reached a rather tense situation. The ancient greed, inherent to both civilizations, has driven them to most dramatic measures: the building of massive cannons, aimed directly at each other. Let the game of interplanetary artilleries begin!
Gameplay
Interplanetary is a turn-based strategy game for PC, Mac and Linux, featuring both single- and multiplayer modes. It is inspired by classics like DEFCON, Civilization series and old-school artillery games.

Your goal is to cause damage to the enemy's planet and to protect your own. Manage your planet's infrastructure using the limited natural resources and research new technologies to develop even mightier weapons and defenses.

At the end of each turn, there is a chance to shoot your interplanetary guns and try to hit major strategic points on the enemy's planet. Be precise, and you might manage to navigate your railgun slug around other planets and their gravity wells, straight into enemy cities!

Interplanetary: Enhanced Edition is Out Now!

As we have announced earlier this summer, this is a massive update for Interplanetary. So massive, that, in fact, it is its own game. Essentially, this new version is a re-build of the entire game for the sake of making it more stable, as well as better sounding and looking. It’s still the same old Interplanetary deep down, but better.

As we are taking Interplanetary to the new level, we are also expanding the geography of our community. In this version we are introducing localization into German language. More languages coming soon!

The update also includes a bunch of new features, some of which had been much requested in the last couple of years, like Online AI Bots, Reconnect and new weapons. Find the full changelog in our dedicated Steam forum thread. 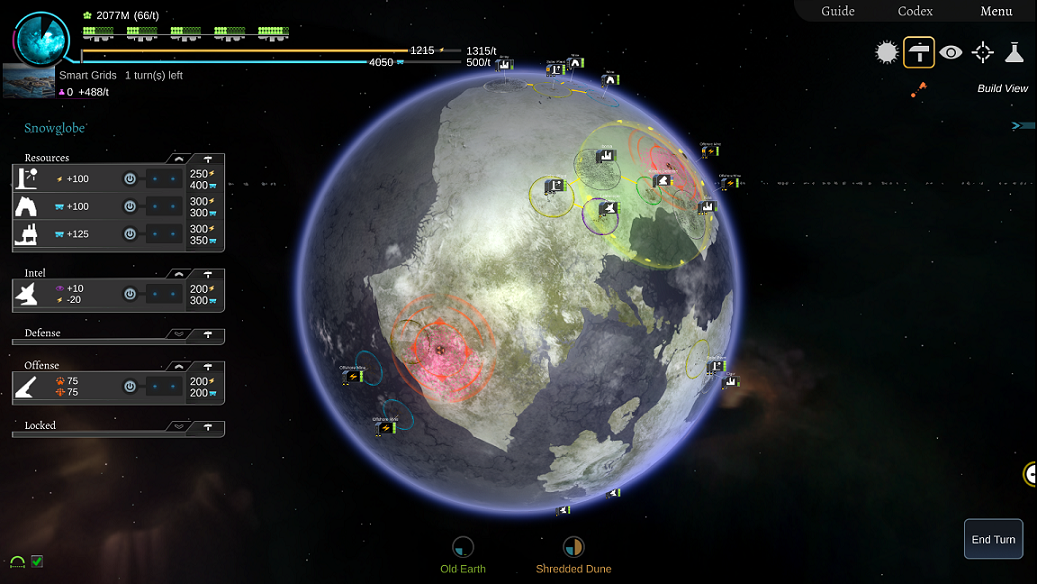 How To Get the Enhanced Edition

So, how do you get a hold of a copy? If you already own the original Interplanetary, then it’s all good. The Enhanced Edition should be waiting for you in your Steam library now. Find it and get to installing.

What Happens to the Original

The original Interplanetary will no longer be on sale as a separate package. However, for the time being, the store page and the community hub will remain open.

Though the Enhanced Edition is, in a way, completing Interplanetary, it is not absolutely final as is. Rebuilding a game from scratch hasn’t been smooth sailing, as expected. While we’ve bulldozed over most old bugs, completely new issues have periodically risen. As a matter of fact, we’re already hammering away at some upcoming fixes and we’re prepared to keep working at it for as long as we can. Please bear with us through the initial roughness.

For future patching, it’s essential that you give us feedback on your game experience. As usual, the community forum is the ideal place for that. The Enhanced Edition does have its own forum already, so join the new discussions and be excellent to each other!

Our very next feature update will see the light in just a few days and it will include localizations into several more languages: French, Spanish, Russian and Simplified Chinese.

Inside Interplanetary: The Remains of the Year

Holiday greetings from Team Jolly Roger! Read on for our thoughts about the passing year and the past, present and future of Interplanetary.

Inside Interplanetary: Behind the Sound

Our sound designer, Jack Powell, offers insight into the process of creating the sounds of Interplanetary.

Lighting fast AI processing has arrived! Also, a quick look into the current development status of Interplanetary and its future updates.

It's been quite a journey. Back in 2013, when we first started active development, we were still working from school, with no idea what would be in store...

Looking pretty good! Can't wait to try it out :D

ai aiming is very good but i would like to see a more tactical less guns blazing ai. :p. great work on the game though.

It does depend a lot on the "mood" of the AI. Of course, we're still developing it, but an aggressive strategy often is a very effective one in this game.

looks good but my computer probably won't run it :(.Do you have demo in plan?

Hi! At the moment we don't have any plans for demo. But, perhaps, you could leave us your computer specs, so we can let you know if the game would work for you :)

There's a typo in one of your description.

Wow! This is a totally awesome project, definitely tracking and waiting for more news.

I posted a comment here and got a alpha key in a PM over a year ago, thing is i never knew PM's where a thing on desura XD. Only found out about the message today... oops. anyway before i found out about the message i was bored and looking through my bookmark tabs and found a link to this page buried away in there. after taking another look i'm impressed. nice to see it still being worked on and even green-lighted too. I've seen lots of cool larger scale games like this and usually after the first little while of development the game just kinda fades away but its great to see this alive and well.

Hah, glad you found your way back here! Hope you're having fun with the alpha!

Oohhhh man! You guys should have worked together with these game-teams,
(1) SpaceEngine: Moddb.com
(2) Paragon: Moddb.com
And Universe Sandbox: Store.steampowered.com
and designed ​​a super game...