Hello everyone,
10 min space strategy is a compact, quick turn-based 4x strategy. Our goal was to make a space strategy game that is not incredibly difficult, has a simple ruleset, but still requires the player to decide strategy, fleet movement, etc. It has all the standard elements of space strategies, you have different fields to research, you can make your own race, there is spaceship combat, colonisation, etc.

We are proud to present a working demo that gives you a taste of what the final game will be. I hope you will enjoy the demo, and if you like it, press a like on facebook :) 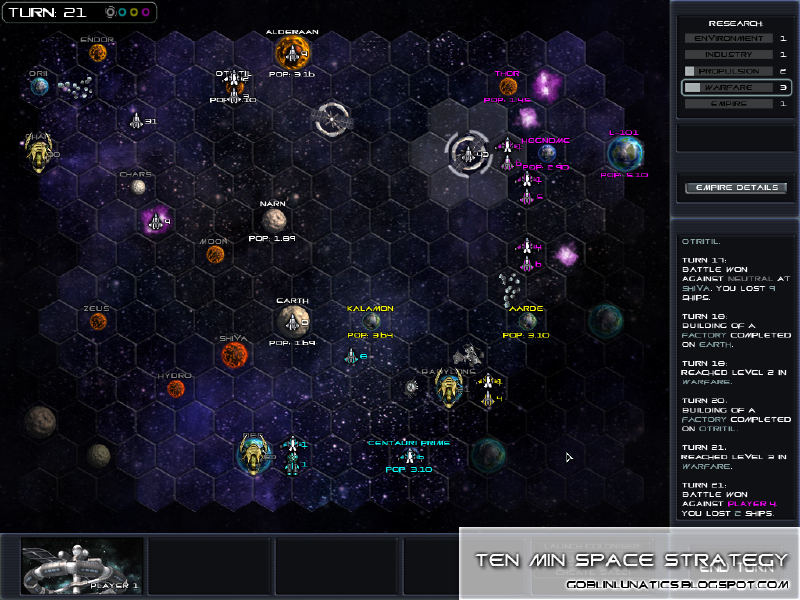 Since there is no ingame tutorial yet, I will give you a few hints on how to play the game (though we tried to design it to be really straightforward and there is a tooltip for almost everything).

In your planets you can build facilities, that create stuff, like fighters, research, etc. Fighters and bombers are created automatically in each turn, but you have to click on a button to build coloniser ships.

You can control anomalies by simply stationing fighters on them.

- Did you encounter any bugs, especially crash bugs?
- How easy the game is, how easy it was to understand the rules?
- Was it fun? :)

Thank you for your feedback,
The Goblin Lunatics
goblinlunatics.blogspot.com

Thanks for voting and helping 10 min space strategy on it's quest to become the 2022 Indie of the Year. You are now in with a chance to score some free games. Help this game secure more votes by embedding the widget (or link) we have included below on your favorite sites.

We are proud to present a working demo that gives you a taste of what the final game will be.

We would like to hear your opinion about the game! Found a bug? Feeling confused? Kinda fun? Comment it here, on our facebook page, or on our blog!

v1.02 is out now with bugfixes and french translation. More updates coming soon with new features.

10 min space strategy is a compact, quick turn-based 4x strategy. Our goal was to make a space strategy game that is not incredibly difficult, has a simple...

its really cool but could use a tutoral

Well at first I was curious what makes "10 Minute Space Strategy" "10 Minute"... I was thinking first, the design team might have sat down and outlined the original concept in 10 Minutes... For a moment I considered that the author was able to program the game in 10 minutes ( Nah! )... But after playing the game, I now get it... You only have 10 minutes to play, because it will HARD crash your system in 10 minutes or less... LOL... I suppose I'll be waiting on an update... :) I did notice, there is no "standalone" version of the game. So of course the first few times I played it was thru the Desura Interface. I made the basic assuption that somehow it maybbe contributing to the crash, and so the next time I played I located the EXE and game folder at "C:\Program Files (x86)\Desura\Common", and moved the folder to my D: drive ( where I normally keep games ). The EXE fired up just fine from "D:\Games\Desura\10 Min...\...exe", however the crash was still present.

This is what I have observed, the crash is evident from the sudden stop of audio. If the game was launched thru the Desura Interface, the screen locks, and there is nothing more to do, wait as long as you want, but eventually must hit the RESET button on my Desktop case. On the otherhand, starting the EXE independently on the interface, on my D: drive, and the crash comes... audio stops... wait about 20 seconds and the computer HOT resets itself.

Hey,
Sorry to hear that, but I don't think there will be updates, the team kinda dissolved. Sorry again for the inconvenience.
Kalamona

Why launch it through Desura in the first place. Just go into the game folder and click the damn EXE. Don't download over desura and that whole desura install and it should work at least it does for me.

Where's the manual? I can't figure out how to colonize planets. My colonizer never actually gets to the planet.

The readme is the closest thing to a manual. Figuring the game out is part of the fun. As for colonization, most planets begin inhabited by space monsters so you'll need to blast them first with fighters. If an enemy gets to the planet first, you'll need to siege him with bombers.

Okay, well. Maybe I'm just new to Desura, but I had a hard time finding the readme. I had to click 'Properties' to see where the directory was and navigate to it.

BUT, it does mention the space monsters, which explains the problem I was having. So I'll give the game another try. I wish I'd been able to read this before playing the first time!

great game but multiplayer will destroy it

The game is greatly pleasant..The only error i've noticed is a wierd lag when i use the divide fleet button.It seems to vanish when a coloniser ship is involved, but otherwise it pops up at random.

A great example of a MOO1 replica, keeping things simple. Unfortunately it quickly loses its challenge.
Give it a go, you won't regret the 3-4hr investment!

The Last Exodus Turn Based Strategy