Two sides are currently planned, but they both consist of an alliance of multiple nations, who will be playable separately in the campaign.

The game is currently only planned for single player, but if possible, a turn-based version will be usable as hot-seat multiplayer, depending on how that gamestyle will work.

Galaxy of Empires is one of my oldest projects, I've started it almost 10 years ago, in Game Maker, in it's glorious 3d engine.
As the game became too big, and I couldn't finish it, I moved to some other projects, and tried to restart development in Unity a few times, but now is the first time, I could at least produce some actual gameplay. Some models are just placeholders, and the game still requires a lot of work, even until an alpha build, but hopefully I can create, at least a demo at the end.

The video shows a short scenario with both space and ground combat. This will be developed too, as smaller ships will be able to fly to the atmosphere, and help ground troops, and there will be some orbital strike abilities for the bigger ships - and of course some anti-space defenses on the ground.
Also the landing will be redesigned, as the idea, that a ship can land anywhere just doesn't work. 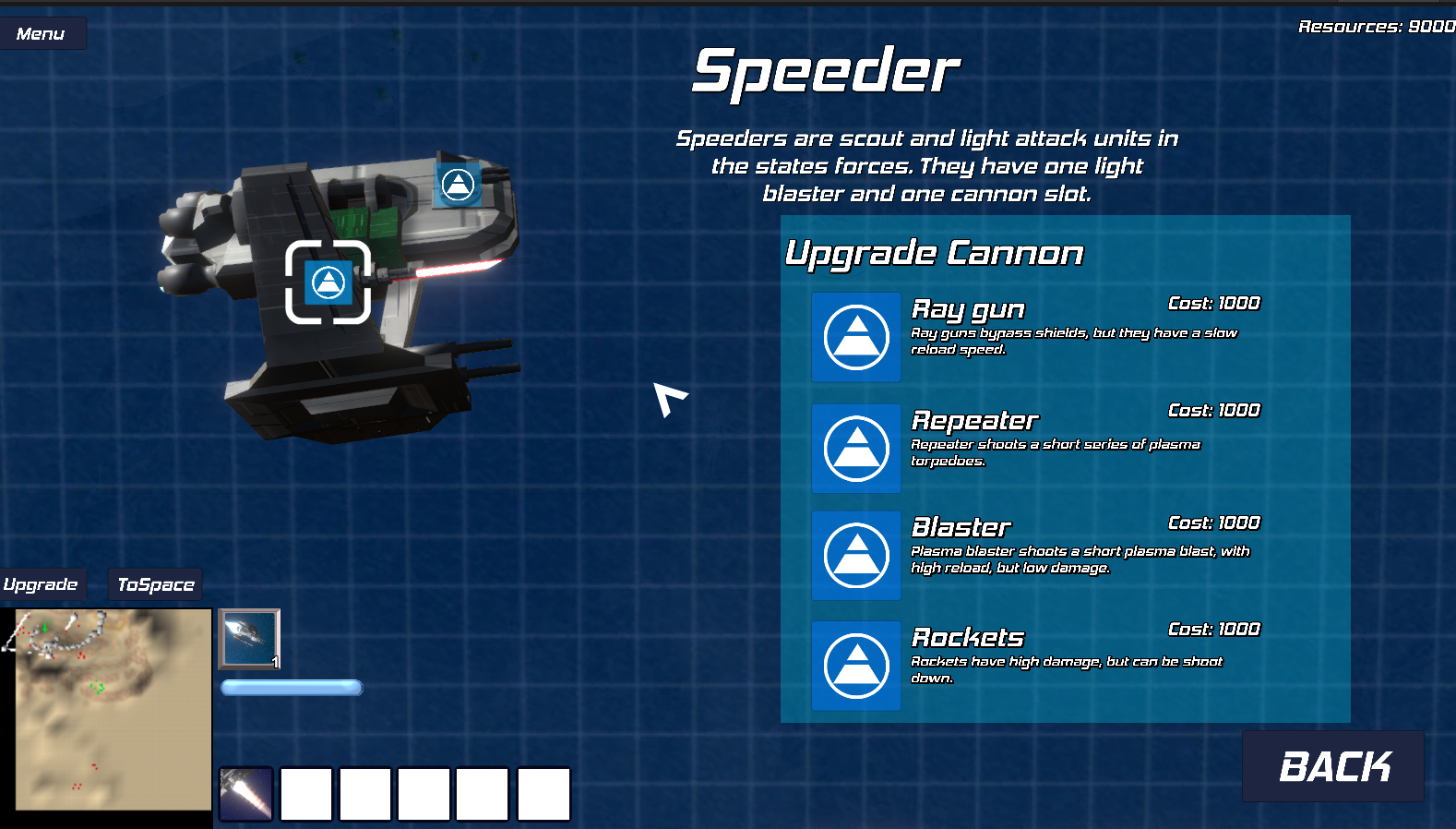 I'm also planning to add at least some naval combat for the game, but that is still somewhat far, I'd like to make space-air-ground gameplay to work first.

The video also showcases the development, which will be an important part of the game, and there will be some other development possibilities for the ships, like places for sensors or extra abilities.

I hope to bring out a working demo in the first half of 2021, both a desktop, and a HTML5 version for Itch.io.

Galaxies and Empires full version! In the end, I decided to release a skirmish version.

A new demo is up, some new features, which include new maps and units, and better AI. I hope, that the next version will be the full game. Also, a new...

Here is a short gameplay video of the "Outer Rim" units against a normal Core enemy.

I created a short gameplay video of the core units, this is a standard skirmish map, and some of the new units can be seen too.

This is the 1.0 version of Galaxies and empires, there will be no campaign, most campaign units were brought into the skirmish. 1.0 version, can contain...

A new demo for Galaxies and Empires, with more skirmish maps,and the new units.

This is a short demo, it lets you play both sides in large battles, on three maps.

Waz up! checking this much thanks.

Hello everyone.
One very good advice for indie game makers:
NEVER CHANGE ANYTHING BEFORE A DEMO!
Bad thigs happen... :)
Apologies for those, who wanted to capture enemy control points, but could not..
It is not how it should work.
A demo is coming soon.

what i see are lots of Star Wars models changed in new form.

well, some models might have been inspired by Star Wars, e.g. H-wing, but believe me, most models will be quite unique. :)

I can't find it on Steam Greenlight. Can someone give me the link? I want to see this game released.

Hello, the game is not released yet, and I did not submit my game for consideration on greenlight.
I hope to release a demo soon.

This one is new on Steam Greenlight, make sure to throw your votes and comments at it guys

Tags
Embed Buttons
Link to Galaxy of Empires by selecting a button and using the embed code provided more...