Paradox Development Studio is back with the fourth installment of the award-winning Europa Universalis series. The empire building game Europa Universalis IV gives you control of a nation to guide through the years in order to create a dominant global empire. Rule your nation through the centuries, with unparalleled freedom, depth and historical accuracy. True exploration, trade, warfare and diplomacy will be brought to life in this epic title rife with rich strategic and tactical depth.

Feb 3 2020 World of Warhammer: a Mod for Europa Universalis 4 2 comments

I admit that i got a little bit bored of adding in provinces, so i decided to tweak at the culture and technology files of the game. For those that don't know, culture in EU4 is categorized, for instance Welsh, Scottish, American would be categorized under "English" and Danish, Finnish, Swedish would be categorized under "Scandinavian." Anyways, for my mod i have Greenskins (goblins, Orcs) then Humans (Imperial, Tilean, Estalian) Of course this will change a little bit as Balancing will become an issue.

I havn't done too much with technology as it requires a lot of modifying to make it work, But i plan on having them tie up pretty much with the countries respected culture.

Badlands: (Sorry for the Resolution) 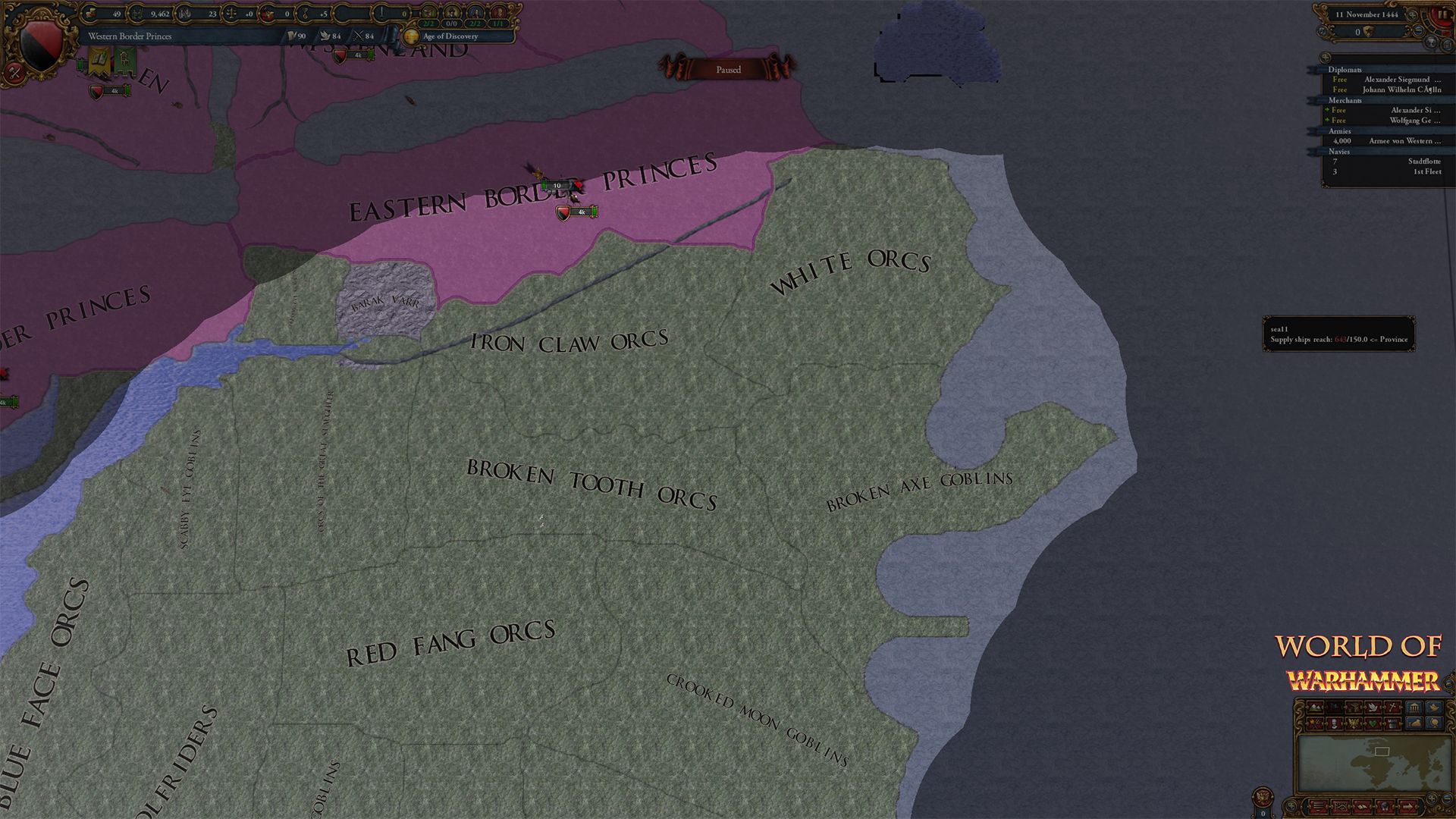 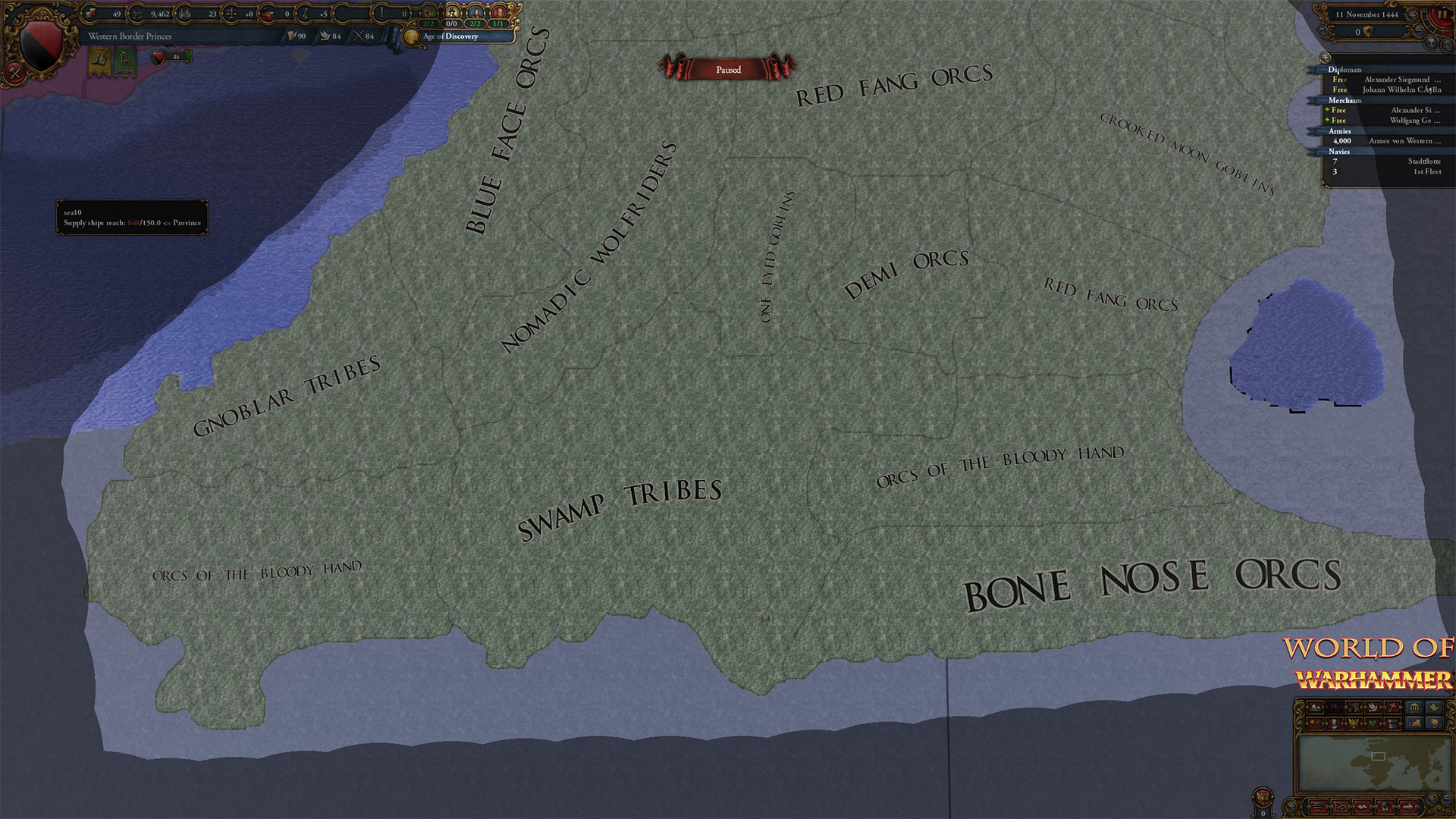 I added all the orc and Goblin tribes for the Badlands. I also edited the terrain on the Eastern Coast. The terrain looks very boring as it's mostly flat, and the terrain in Warhammer is supposed to be arid, but the closest thing i can do is make the Badlands a desert as there's no actual arid texture. 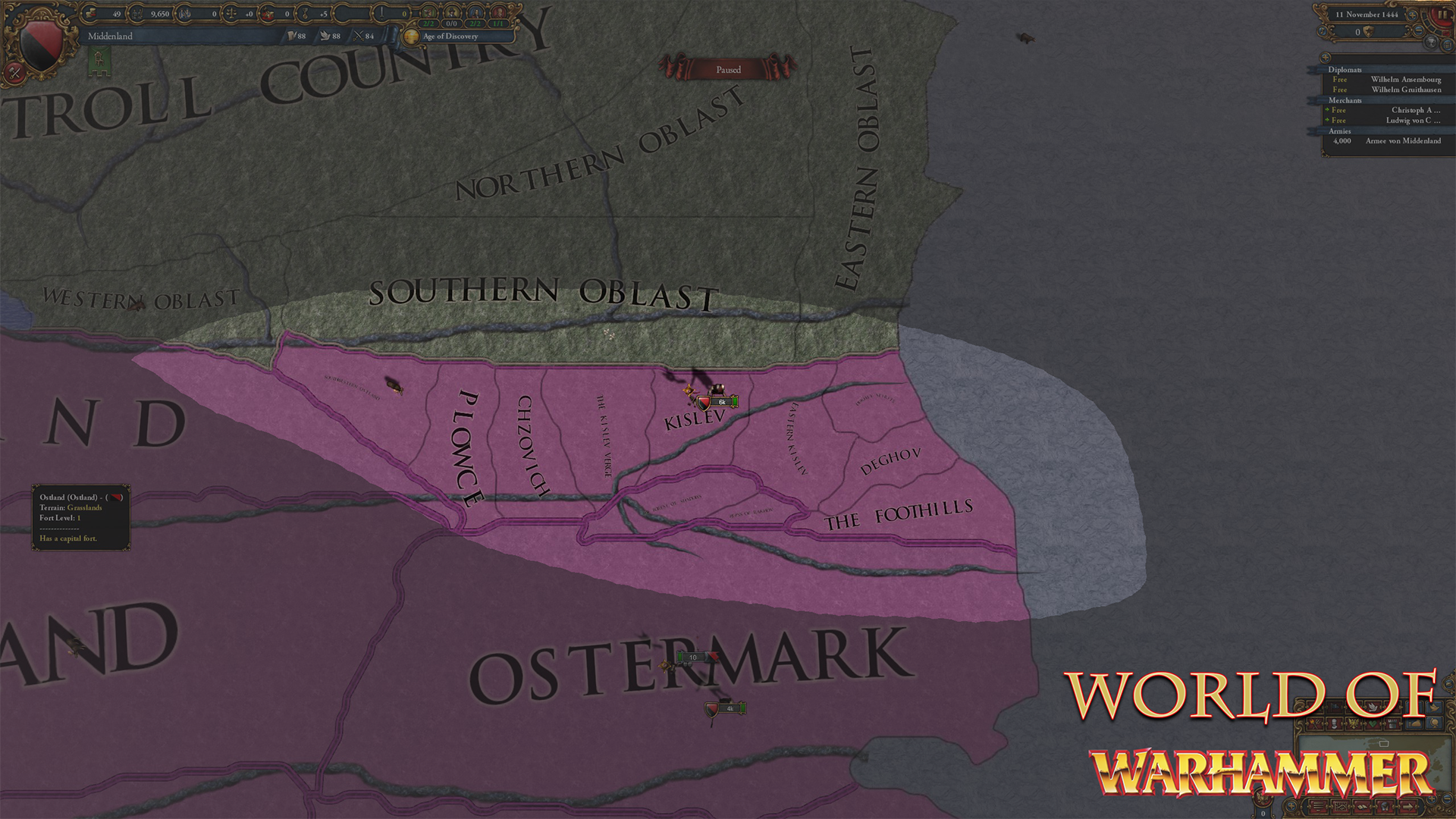 I'm only here again because i wanted to show off some new provinces i added. It's hard to see, but i added roughly 10 provinces for Kislev. Sadly however, this would take too long when modding, so i would like to keep the number of provinces per country around 4-7. I may add more if people believe that more should be added. 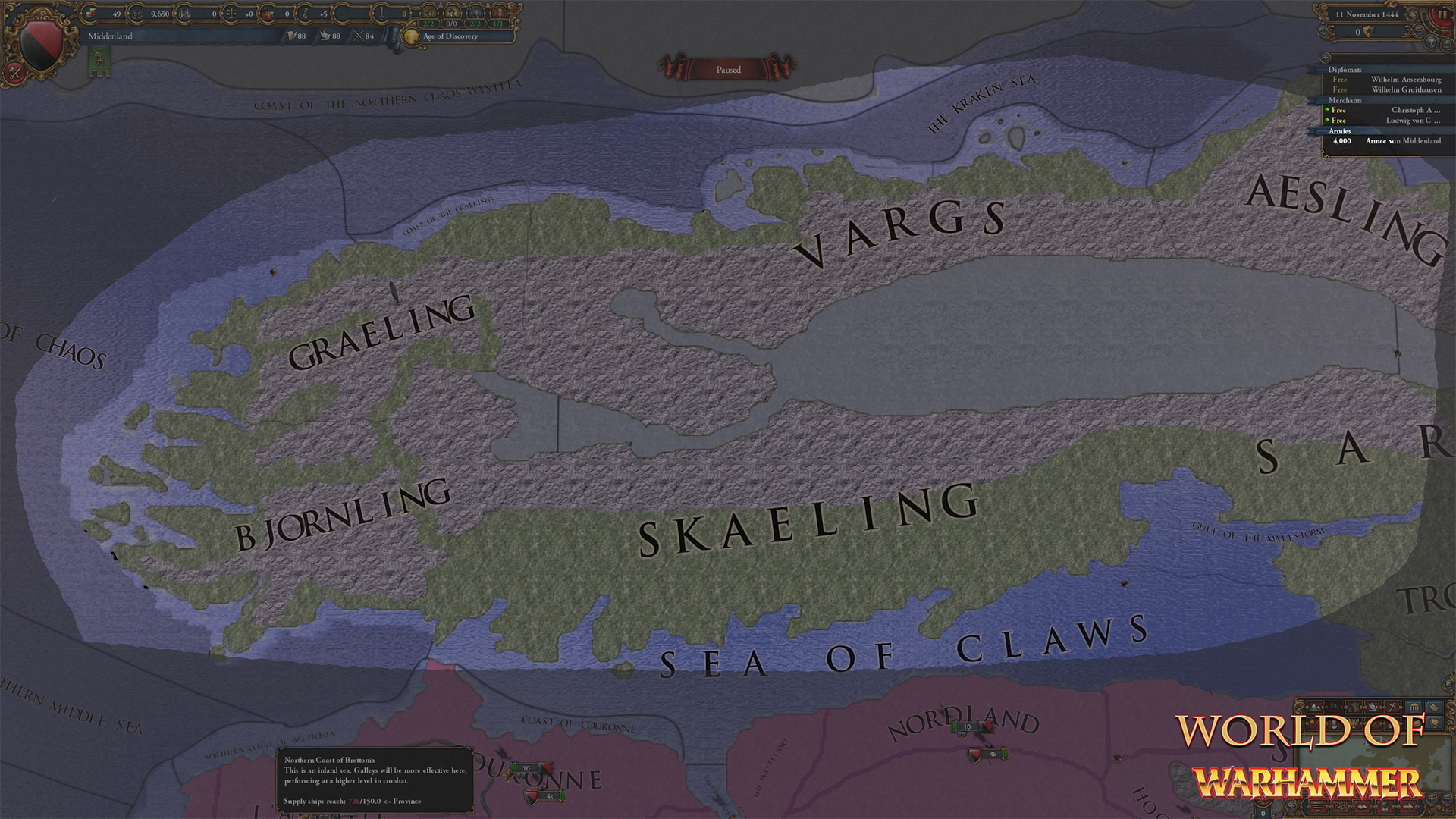 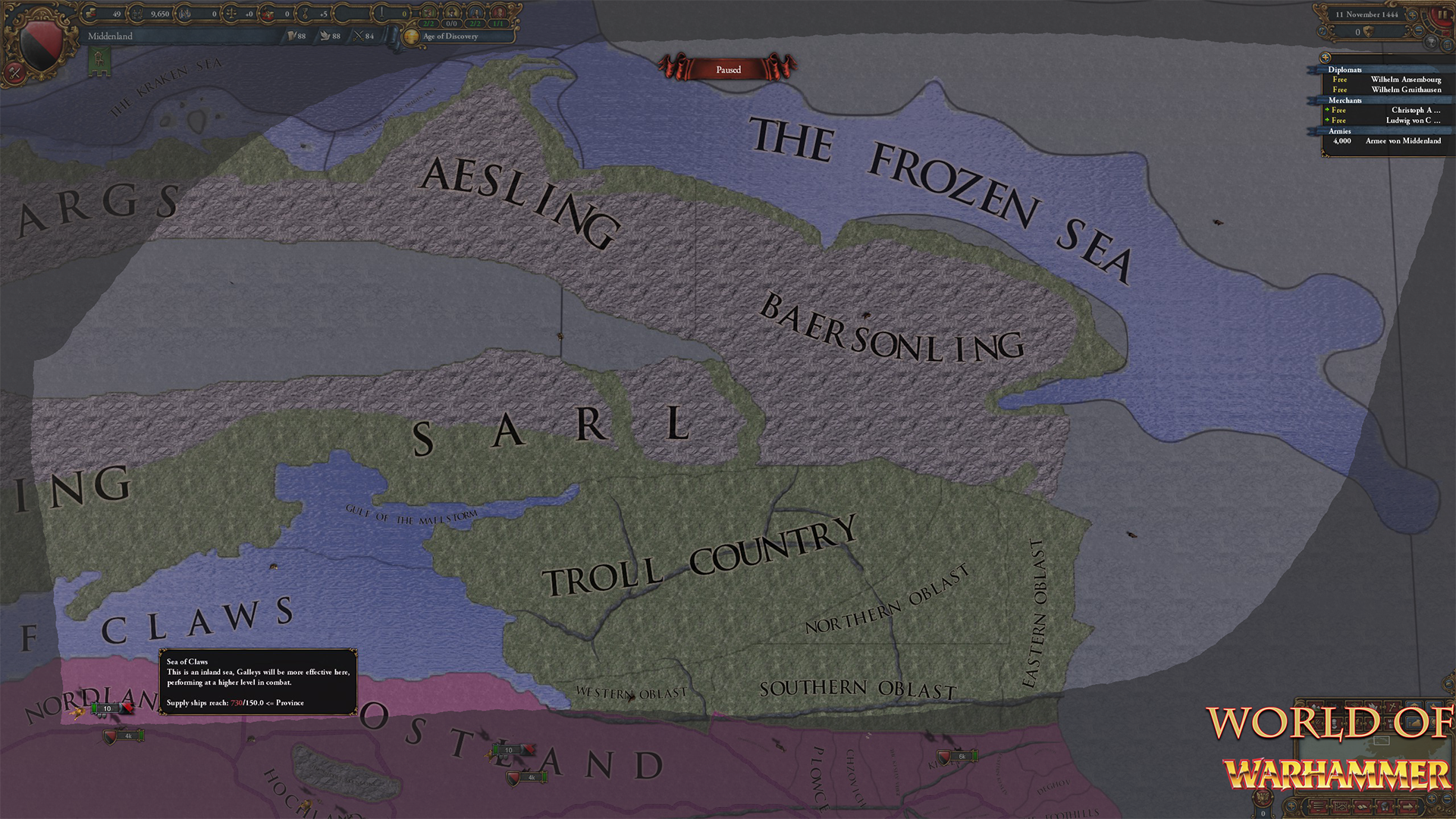 I added some entry points into the mountains to allow for more free range when invading around Norsca. I also heavily eddied the coast line around the continent. 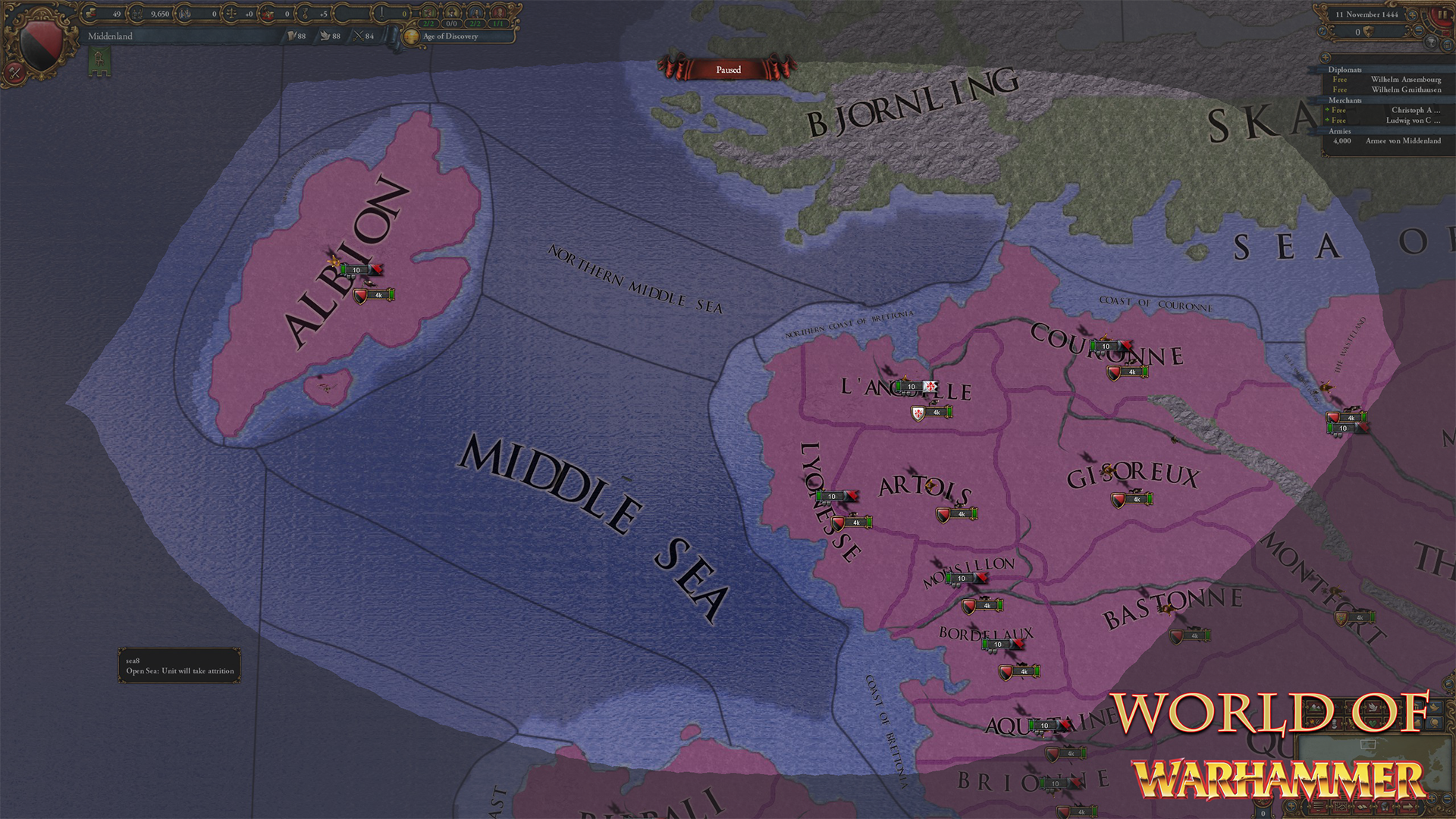 I will mark up the provinces a bit to look more interesting and less straight. I of course will add more sea provinces, but this is just a small overview. 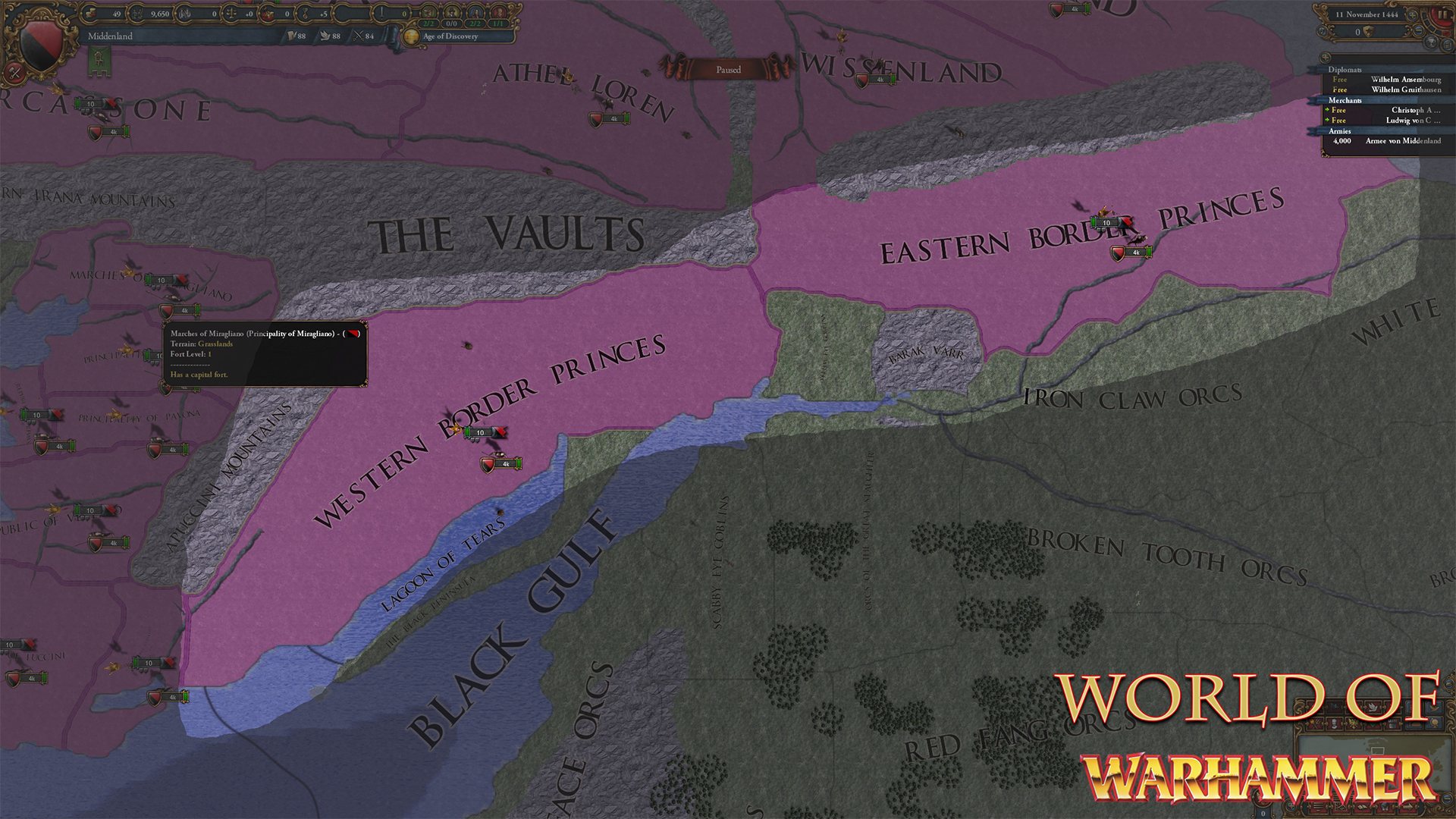 According to Warhammer lore, the Border Princes are made up of multiple smaller states to form a larger government, i could potentially use the HRE to do this, but i would rather save that for The Empire, since you can only have one HRE in game. I did what Total War did and just simply split them up in two. I'll also randomize relations between the two similar to what eu4 does with Castile and Aragon. This should allow for some more diverse campaign in which you and the other border princes are friend or foe.

stay tuned for my next dev diary!

Jan 1 2020 World of Warhammer: a Mod for Europa Universalis 4 3 comments

Dev blog for December, mostly goes over Estalia and Tilea. This will be much shorter than the previous one because the holidays took up most of my time...

Another blog update for the coming version of Lord of Universalis (3.0). This blog is about the new User-interface that will give the mod a whole new...

Blog update 2 about the coming version (3.0) for Lord of Universalis. This time the focus is Mordor.

Blog update about the coming version (3.0) for Lord of Universalis.

Transoxiana, at its start, is a Iconoclast Irish Culture Monarchy crusader state located mainly in the Central Asia region, Tartary subcontinent of the...

Imperium Universalis 3.0.3(Shores of the Aegean)

Imperium Universalis 3.0.2.1(Shores of the Aegean)

This is the steam patch, I will playtest with a friend or few. feel free to reach out if you want to help the development of this mod.

hi guys can some upload the rise of the atlantis....... i hate steam i cant dl the mod there and i don't know where to download elsewher,,,,,,,,,,,thnks

the only time when Europa Universalis is historical correct is at a new game. After one day it is individual. This is why it is so awesome :D

I know right? I just hope that they release an official Crusader Kings II to Europa Universalis IV save game converter DLC at launch. Either that or I'm going to restore the glory of Rome (Byzantine Empire) at game start.

It got real :) yeees

For a complicated game, the UI and everything in general are intuitive and not too hard to understand. Comparatively, pretty much every last grand strategy I tried in the past simply was too crazy and unintelligible for someone new to such a genre, like myself. However simple though, if you're looking for a war simulator look elsewhere. This game's about international relations and nation management, the least of which is on the list of priorities is throwing armies around like you would in a Total…

March of the Eagles Grand Strategy

Victoria: An Empire Under the Sun Grand Strategy