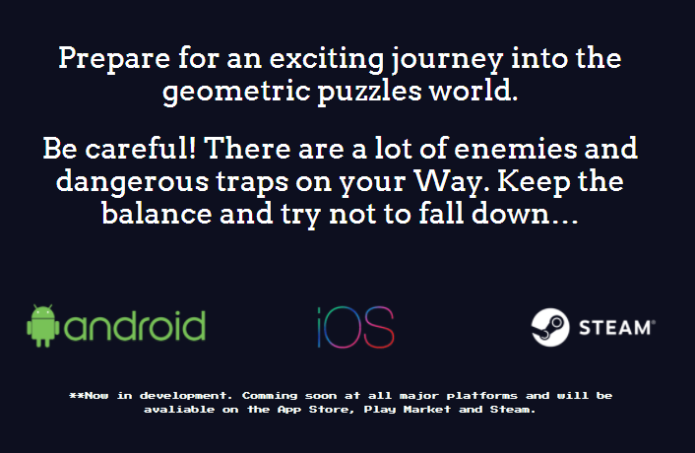 Cubanoid is a hardocore puzzle that represents a massive labyrinth packed with dangerous traps, enemies and logical brain twisters. Just one improper step and you are excluded. At the initial stages of its development the game looked like classical puzzle Sokoban, the main goal of which was to place boxes into corresponding places. Although new ideas have been arising. We did our best to implement them making the game interesting and unique.

There are 25 handcrafted levels with pleasant graphics, exclusive background music and cumbersome brain teasers that will make you think hardly. We have realized 80% of planned functionality at the moment. User interface and thorough testing should be processed with until the official release in December, 2017.

To promote Cubanoid and grow its popularity (top games), use the embed code provided on your homepage, blog, forums and elsewhere you desire. Or try our widget.

CEFORE is a physics-based puzzler in an abstract simplistic art style in which you get contracted to bring down different structures in the most creative...

Physics based puzzle game type of billiards. If you like billiard games or love pool then this game is for you!

Scriptable 2D Game App which allow you to create your own 2d game.

Artificial Mind is a first person puzzle-solving sandbox game, that was inspired by great titles like Portal and Garry's mod. In this game you take role...

In CyberSentinel you take the role of a hacker, who writes programs to steal data from secure systems in a kind of '80s/'90s stylized version of cyberspace...

Graviter is a real world physics based game about manipulating the gravitational forces. Shrink and enlarge bodies, move them around to find your way...