The Space Race was a lie. In the late 1950's, a meteor shower pummeled the Bering Straits. In the debris, American and Soviet scientists simultaneously discovered an off-world bio-metal that they could fabricate into amazing vehicles and weapons. They quickly gathered up and depleted all of the material that had fallen to Earth, and both sides were left wanting more.

This began the real Space Race... The one too brutal to televise. They launched their space programs in their efforts to find additional bio-metal deposits, and it was the military imperative that made the space race so intense -- not Kennedy's "for the greater good of man." Neil Armstrong's walk on the moon was actually the biggest cover-up in American history. Nobody knew that we'd built a full moon base just a few feet away. In fact, it was General Collins, commander of the American moon base at Eagle's Nest One, who took the original picture of Neil stepping onto the moon. It's amazing that nobody ever asked who took that picture. The NSA thought they'd made a real mistake when they released it.

Now you are in command! Lead your troops across the galaxy on a mission to control the alien technology before the Soviets do. Only one super-power can survive in the Battlezone.

A Traitor's Fate, Overdrive, and the Renegade Tank

Here's a big news update: Singleplayer, Multiplayer, and the Renegades. All through July and August we've been working (I'll get to the "we" part later) to get this game on the road and ready to be tested in October.

First off, the secondary campaign, A Traitor's Fate, has completed its first revision! This means it's ready for testing, and to undergo many more revisions as its improved and simply made better. 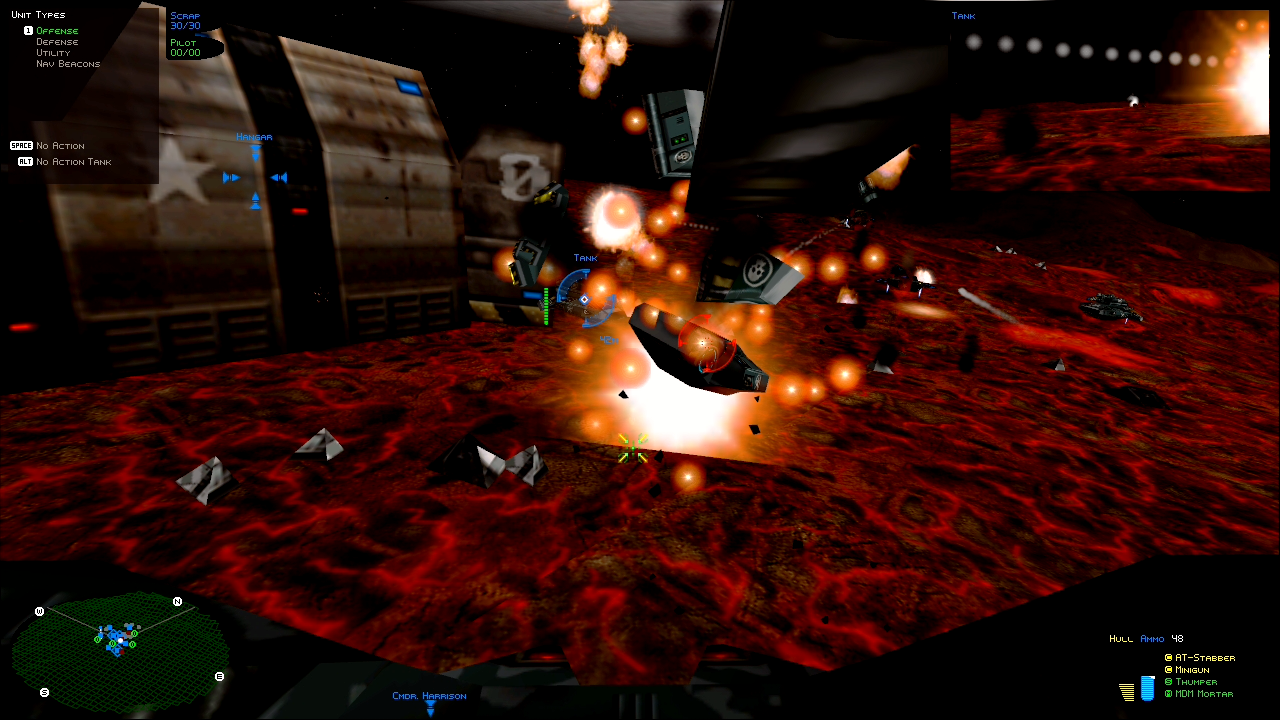 The missions in A Traitor's Fate are "themed" missions: they all have minimal commanding in difficult and short missions. Every mission is designed to last 15 minutes or less, allowing players to get a good run in their daily Battlezone. In these missions, you (the player) will never command a full base, and there is a ton of emphasis on dogfighting and speed. They are also designed to be the most difficult missions in the entire expansion, compared to the primary and IA missions. Another fun fact: every mission takes place on real terrain! 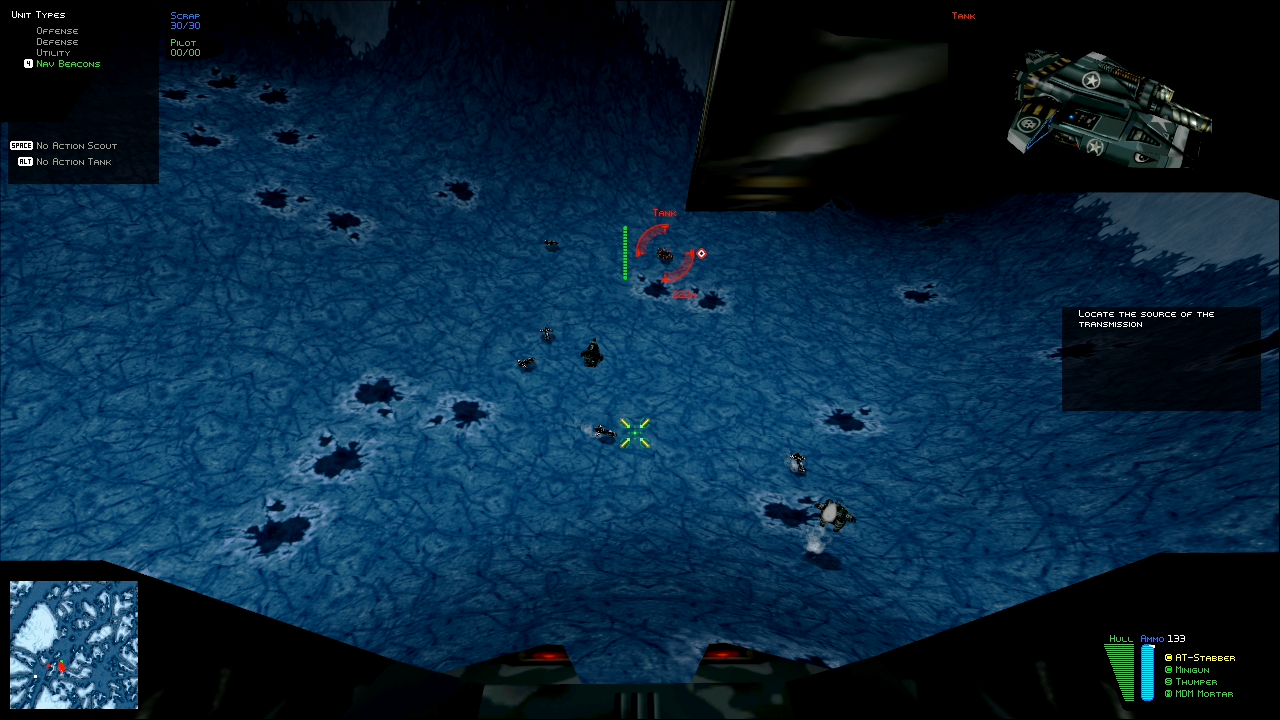 These missions were finished first for a good reason. The first is to establish a solid method of developing missions for the primary campaign. This has proven itself a worthy reason, providing several custom utilities for instant use. 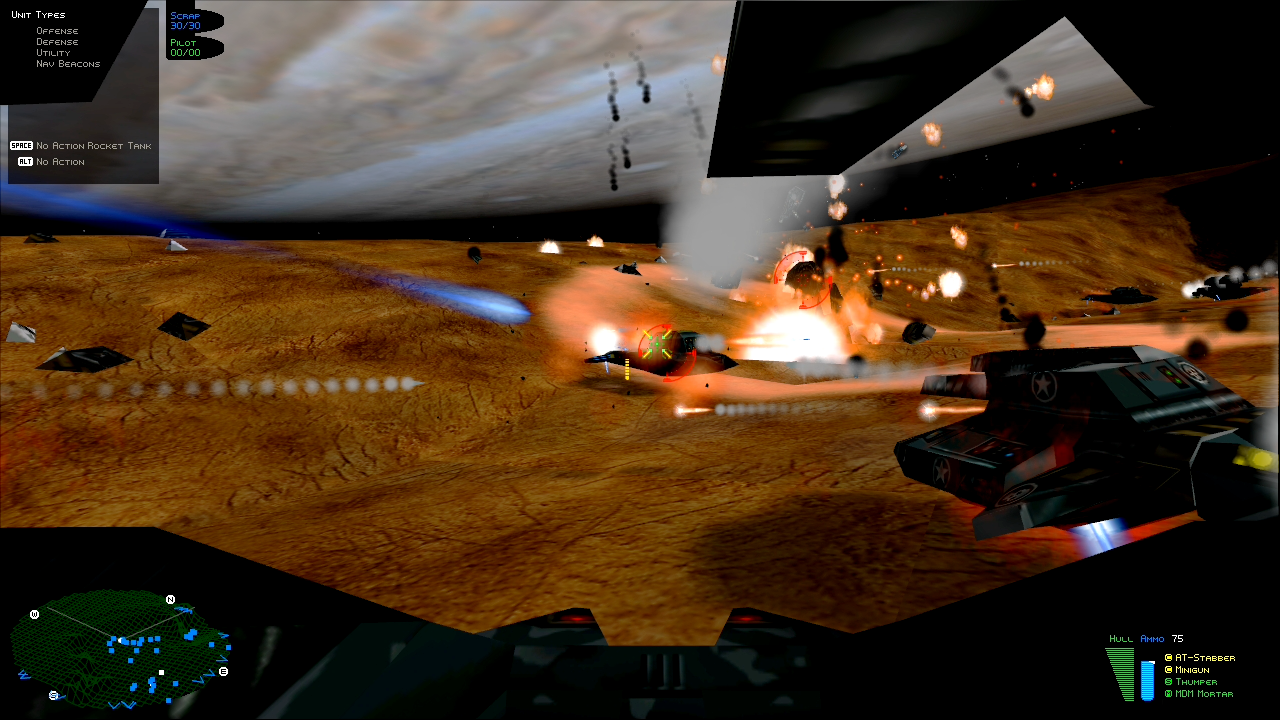 This campaign will feature numerous weapons that might be added into multiplayer, such as the CBS Cannon. These missions, as with the rest of the content, will be ready for testing at the beginning of October.

Onto other news: the Renegade story has been refined and recreated into one that is far better than what was originally planned. The Renegades now truly live up to their name of being "renegade". No longer are they formal allies with the NSDF. No longer are they large in numbers. And here's a bit more news, something that introduces something that hasn't been seen since The Red Odyssey, one of Battlezone's official expansions... The Overdrive. Previously called the Turbo Boost, this accelerates the user's speed drastically, and is used just like the CRA Cloak. Yes, it's the first faction ability seen since, and we are proud.

Finally, the Renegade Tank has been balanced and ready for testing! As said before, the Renegade ships focus on speed, build time, and scrap cost, in exchange for hull and ammo. The Tank shows this very clearly.

You may have noticed there's no Special weapon on default, classically the Thumper on the Grizzly and Czar. This may provide an interesting twist to factional battles, considering the Tank now has the MDM Mortar.

That's it for this time, we'll be sure to update this more often!

Remake of NSDF Mission 7: A Nasty Surprise. This remake helps visualize differences between Insurrection's missions and the original's missions. To install...

A zip archive primed for burning to disc, including all the maps, models, units and textures, Level Cataloger, a help manual and an included splash screen...

A self-contained setup installer for Battle Grounds containing everything you need to get Battle Grounds working; all the maps, models, units and textures...

These skins are so you can edit the Battlezone ships if you know how/want to.Also included are the import/export files for the GEO,VDF and SDF files so...

Activision should give another chance to this franchise. That game is a MASTERPIECE !!!!

its actually true that the moon landing was a fake

So then you believe that the russians landed first?Or not at all?