VOTE FOR US ON GREENLIGHT, THANKS!

Band of Defenders is upcoming modern coop FPS with tower defense elements set in a world destroyed by nuclear holocaust. You are member of elite mercenary group that fights hordes of bandits and mutants that are the biggest threat to recovery of human civilization.

Band of Defenders is game that won't throw any obstacles in the way of your experience. Immerse yourself into game and defeat hordes of enemies - alone or with help of your fellow mercenaries. You will have to protect objects that are crucial for survival of human civilization that is slowly and painfully recovering from nuclear apocalypse. Last gas station in the vast desert between struggling human settlements, path to the last drinking water reservoir in whole country, it doesn't matter - enemies will not pass or your mission fails. But you won't go into fight empty handed, with many weapons, traps and other useful items at your disposal.

After killing waves of enemies, you and your party will have time to prepare for another one, not only by acquiring new weapons but also by building barricades and turrets of many different types. These structures will be crucial for your survival and for defending the object which you have to protect. Build, repair, upgrade and refill ammo in the short time between enemy attacks and prepare the best possible defense together with other players. 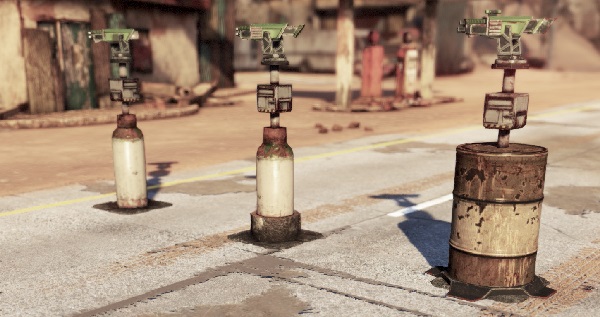 Man cannot live by fighting alone. We know that so as you win games and level-up, you will unlock better weapons, higher-tier structures and also visual items that will be used for customizing your character(s). Plenty of weapons, structures, characters, hats and other items to unlock and choose from will make sure that you will enjoy time spent in battles as much as your returns to your base.

War, war never cha... Well, it does change. It gets more and more destructive until the moment when there is no one left to fight, or live. Nuclear holocaust decimated human population and most of the survivors returned to more primitive ways of living, attacking already quite endangered remnants of human civilization. Lead by savage mutants worshiping the Cult of Gore, these numerous groups of enemies of reason and culture are constantly threatening recovery of our civilization.

You shine as a beacon of hope for everyone. Or at least everyone who can afford your services. It's not greed, but everyone needs help and Band of Defenders cannot save everyone so why not focus on those who can pay and make your unit more effecient and operational?

Enemies in Band of Defenders

Every shooter needs something to shoot at but in Band of Defenders enemies are much more than targets. They are threat that is trying to destroy remnants of human civilization. Specifically they are targeting important structures that your Band of Defenders is trying to protect. From the start we knew that enemies have to be interesting, dangerous and very diverse. So each one has his own strenghts and weaknesses, his role in battle.

We took inspiration from popular post-apocalyptic worlds – Mad Max and Fallout. We wanted two distinctive groups of enemies with very different combat capabilites. We call them „Bandits“ and „Mutants“ but in our lore they are known as „Unblessed“ (because they weren’t blessed by mutations) and „Better-ones“ (well, because they are better, or at least stronger and more dominant). These groups cooperate with Bandits being more of a slaves than equal partners to the Mutants. That’s why Bandits look like caricature of a human beings – they can carry huge explosives on their hunched back or be chained like slaves. There isn’t job enough inferior or dangerous that Bandits can’t do it. 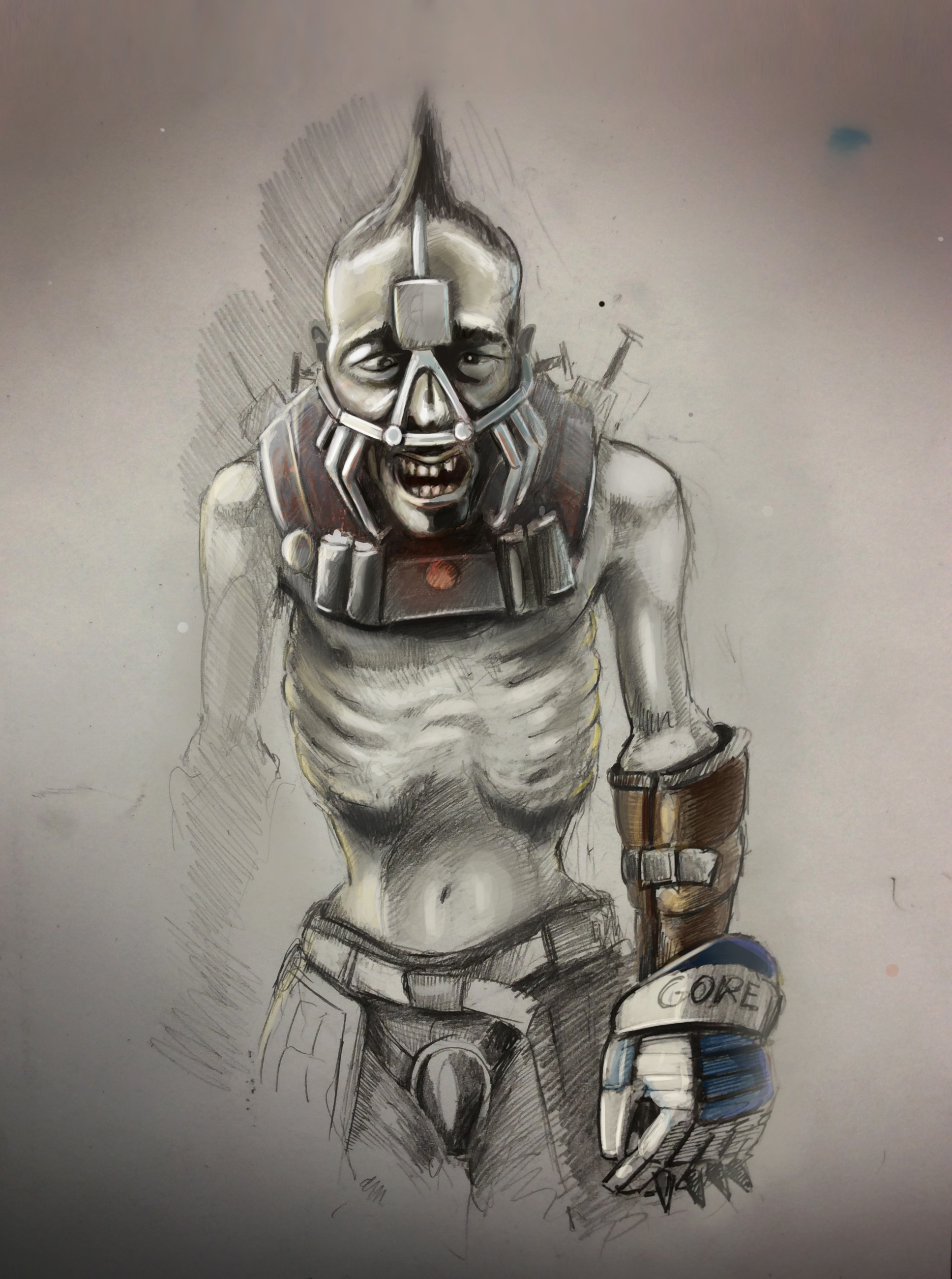 Mutants on the other hand are strong, big, muscular and important. They are tough (and green) and each one of them is very dangerous. 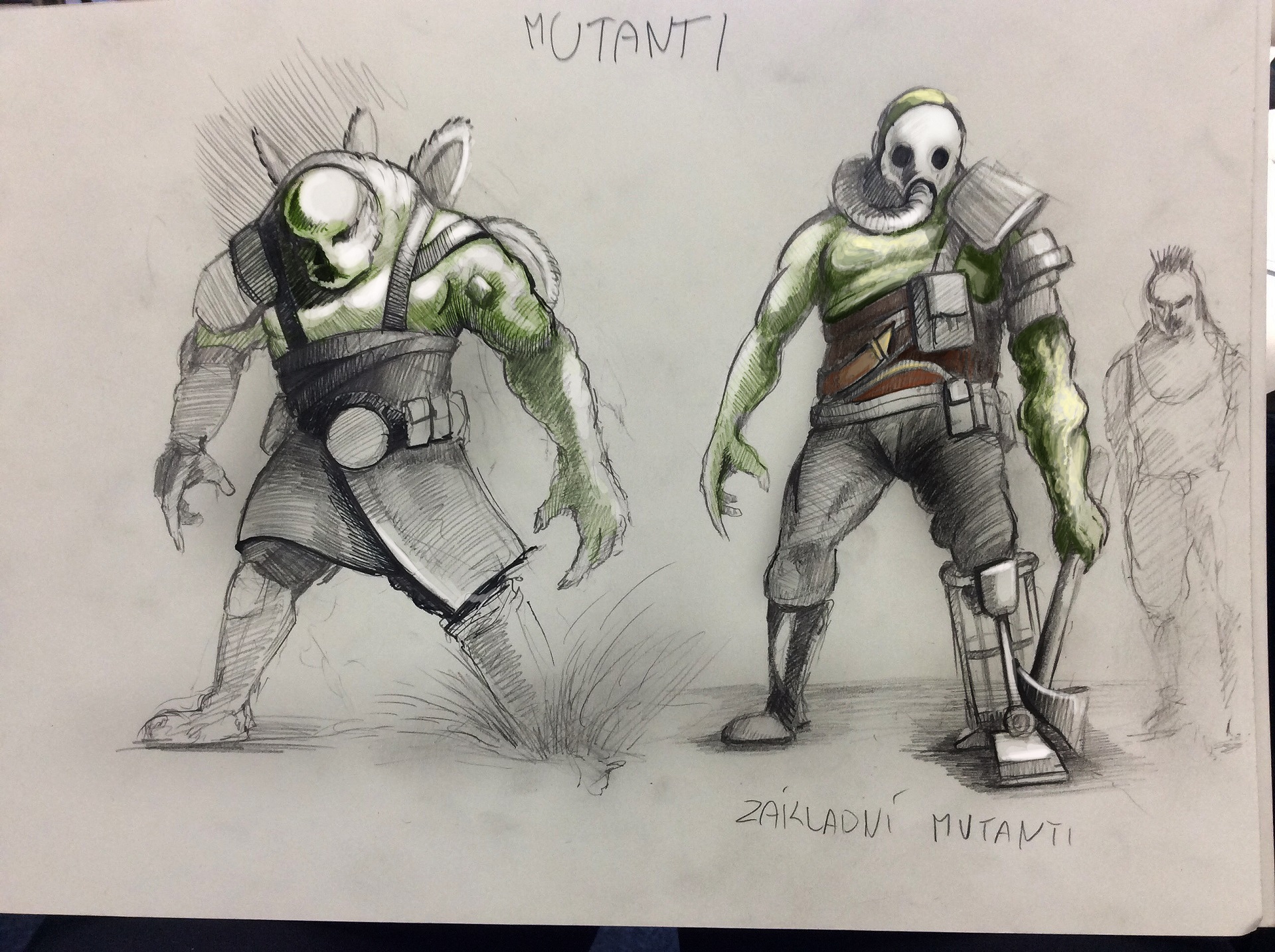 Slave-like status of Bandits makes them expendable. They usually act as a frontline cannon fodder – be it basic melee enemy, suicide bomber or „engineer“ that sabotages your turrets. It doesn’t mean that they are not dangerous! They just fullfill ungrateful role on the battlefield and their life expentancy isn’t very high.

Mutants are much more durable than Bandits but they often also act more carefully – they can shoot at you from distance or even launch artillery strikes from far away and when they approach your base, they can use big melee weapons to destroy your fortifications in a blink of an eye.

Lets put off theory now and look at our first enemy – we call him „Bandit Trash“ because he is the weakest enemy you will encounter. 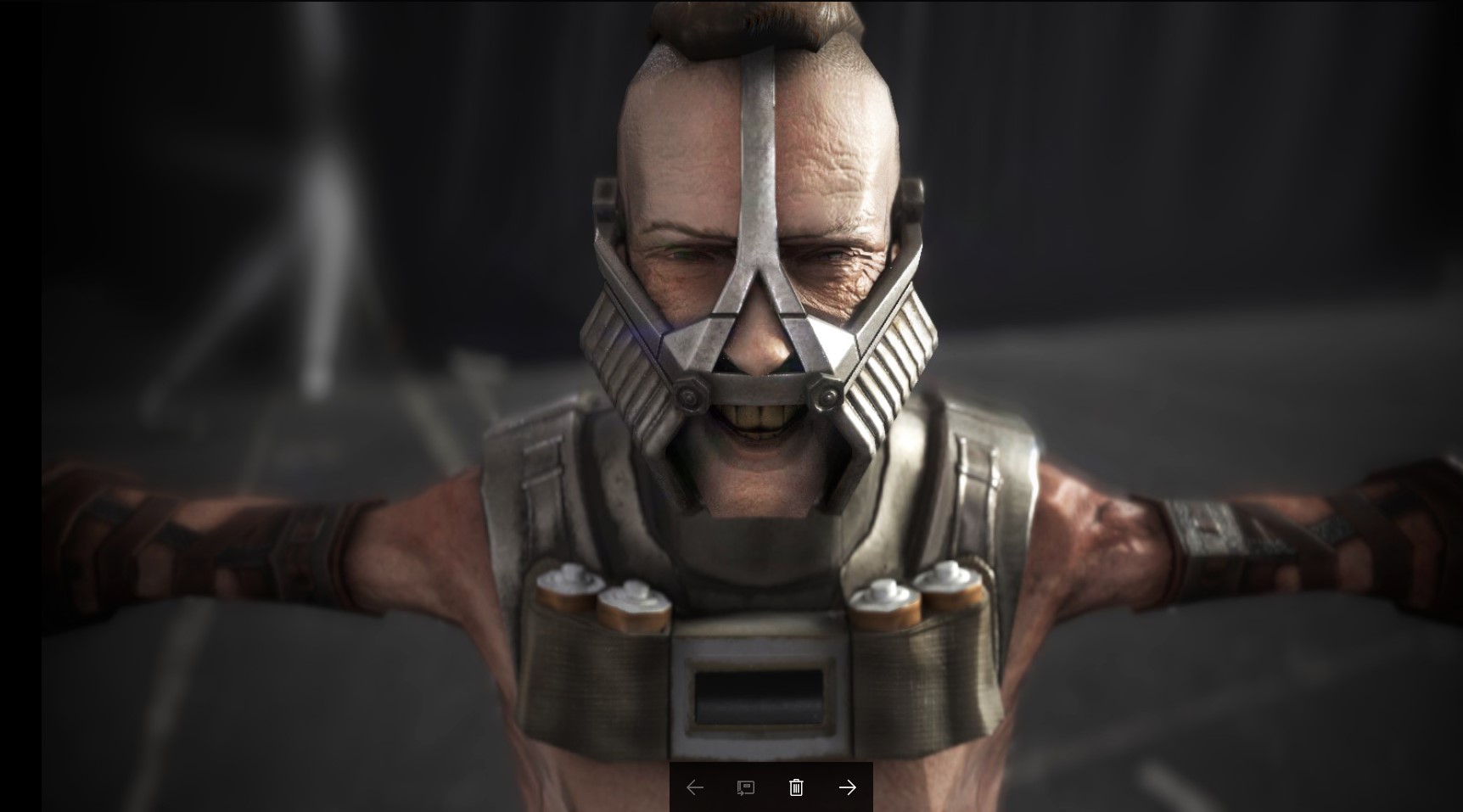 This handsome man with huge iron shackles on his body will be one of the most common enemies you will meet. He will try to punch you or your defensive structures to pieces but thanks to his low damage, low HP and non-existent armor you won’t have much trouble dealing with him. But it is his purpose – give time to bigger threats to come near your defenses and crush them with huge melee weapons, rocket launchers and bombs.

The art of the game reminds me a little mad max, I liked it, I play with the future.

Indie
Tags
Embed Buttons
Link to Band of Defenders by selecting a button and using the embed code provided more...