Apocalypse Not is a very ambitious game. It aims to bring FPS/RTS/RPG and survival horror elements all into one game… And to well, actually not have it suck. The basic concept is that you are a survivor in a randomly generated city trying to rebuild civilization or to just survive long enough to escape. To rebuild you’ll need to find and recruit survivors in order to defend your territory and fortify new areas. Each area you fortify will provide different bonuses. For example a power plant will activate the power grid providing light during the night hours along with other added bonuses. Capturing houses will provide places for your survivors to live and allow you to recruit more. Farms provide food and the police station will probably have some weapons and ammunition. The game is currently free in it’s Alpha state, and I plan to release a new update every week with something new.

After a 3 whole weeks the next release of Apocalypse Not is ready to go. In version 0.0.25 you'll find more zombies, more areas to explore, more weapons, and a new skill system that allows you to level up your character and gain new abilities. This release also marks the final release where the game will be considered to be in an Alpha state. This is discussed more below but for now, check out the new version of the game which is already available on the Official Website or wait for it to show up on the IndieDB page.

If you haven't already seen the game or the newest release video view it below to see some of the new features in action. 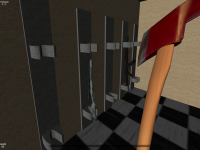 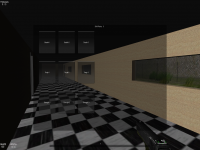 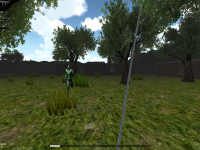 Above on the left you'll see a little profile shot of the new scout sniper rifle waiting to be plucked off the shelf so it can start popping zombie heads. This is one of the 3 new weapons waiting for you in this update. There is also a bat and a Glock 17 available. The aiming system has gotten a slight rework as well. Aiming now works by holding down the aim button to aim and releasing when you're finished. There is also a small cross-hair used for melee weapons as well to make them a bit more user friendly.

You can also see in the center, a new menu for the new skill system. 3 new skills are now available and provide various bonuses for gaining levels. One such benefit is stealth, which gives you the ability to more easily sneak around enemies without being noticed. Toughness reduces damage taken from enemy attacks, and strength increases the damage done by melee attacks. One skill point is awarded per level and can be assigned at any time through the new menu.

To the right you'll see the beautiful back area of the laboratory area which now has a load of new spawners. The area has become infested with zombies, and some survivors may be hiding there as well. In fact, the entire map will seem to have more zombies now as the maximum number of enemies has been raised to increase the amount of action. Their AI range has also been increased to make avoiding them a bit more difficult.

And as usual, several bug-fixes have been included in the release. Zombies will no longer appear to be floating when you first find them. The weapon zoom issues no longer exist, and glass now properly makes a shattering sound upon being broken. The police station geometry issues have been corrected, and collisions with the objects in the lab buildings are working properly now as well.

The next release will include a research system to provide various improvements to your new civilization. Also the inclusion of a saving system so you can pick up games where you've left off should really add to the experience. Because of these major features along with the fact that the basics of the game are now in place, the next release will be considered Beta 1. As always I thank everyone who follows the game and appreciate all of the comments and suggestions I've received over the past few months. The game is only getting better so stick with me.

Apocalypse Not version 0.0.24 has been released today with some new features, additions, changes, and upgrades. To top it off the game is now available...

The newest version of 'Apocalypse Not' boasts dramatic performance improvements in addition to several bug fixes and new features.

Apocalypse Not is looking for team members

Apocalypse Not would like to find a few more team members to help with 2d art, 3d models, animation, and sound.

Apocalypse Not has reached Alpha Version 0.0.22 as of Sunday, September 9th. Major performance improvements have been made for this release as the game...

This is the MacOS version of the game. To install simply unzip and run the game.

This is the 32 and 64 bit version of the game for Linux. To install simply unzip and run the game.

This is the Windows 64 bit version. To install simply unzip and run the game.

This is the Windows 32bit version. To install simply unzip and run the game.

Here is the latest version of Apocalypse Not for Linux x86 & x64. Check the readme file included for directions.

Here is the latest version of Apocalypse Not for MacOS. Check the readme file included for directions.

i suggest adding vehicles (do you have 'em now?) and maybe adding mounted machine guns over sandbags or barricades? dude i hope there's some ride able vehicles here, maybe add third person shooter perspective and the ability to change clothes, make makeshift weapons, make protective vest or scavenge them, a military base? ok i asked to much sorry

I REALLY nope its not

Will you be adding a stamina and hunger and thirst meter to make it a bit harder maybe only on the hard option. idk xD just wondering. the latest update is amazing!

i got a few questions..
like can you save your game?
and when i fortify a place there is no door in the fence for me to leave or come back. what do i need to do there?

The doors on the fence are kind of hard to find, they're in the center of each wall. You can pick them out because the posts are close together where they are. As far as saving, that feature is in the next release towards the end of the month.

I adore this game even more now, though I would like to inquire something. Are you going to be selling this game for money in beta? And if so, how much would it be?

Beta will be free for the forseeable future

Tags
Embed Buttons
Link to Apocalypse Not by selecting a button and using the embed code provided more...