Andromeda: The Darkest Night explores the epic universe of Gene Roddenberry's Andromeda and leads the player straight into the conflicted period of the Restored Systems Commonwealth. After 300 years of chaos and anarchy (the long night), the young faction struggles for stability, but faces various foes who seek total domination over the three galaxies Andromeda, Milky Way and Triangulum.

Andromeda: The Darkest Night lets the player take part in massive multiplayer battles in a hybrid of first person shooter and space flight simulation. It builds upon the brand new Visual3D.NET engine to allow a seamless transition from planetary surfaces to space.
Pilot Slipfighters or try to sabotage the enemy base as a Lancer - the choice is yours!

The Darkest Night is an independent project that will be available for free for all fans of the show and thrilling multiplayer battles alike.

Since the 20's, music has become a key element in feature films. Either epic, atmospheric, funny or sad - music substantially alters the way we perceive imagery. What is valid for Hollywood is just as fitting for the gaming industry as well. However, big orchestral scores were often exclusive to AAA titles, considering the recording costs for a symphonic orchestra. With today's technological progress, decent orchestral scores have become an option for low-budget, or in case of mods, no-budget productions. That means - if you find a composer who is willing to contribute to your project.

At Invision Games, we're very happy to have the talented David Fang aboard. Today, I'd like to introduce to you his latest piece of music for Star Wars: The New Era. "The Battle begins" is the main title of the mod which will also play in the game's menu:


Although this is an entirely new melody, you can clearly hear the references to John Williams' original Star Wars score in the way that the piece is orchestrated. In some cases though, you might consider a pure instrumental track too weak - you might want to have a choir or a singer in addition to give your title additional depth and provoke goosebumps. Listen to "Fall of the Commonwealth" - part of the extensive soundtrack for our third project "Andromeda: The Darkest Night":


Again, this is not the result of a studio recording session, we hired no singer for this track. In our latest developer diary, David Fang explains some of the process of creating a new soundtrack.

Thinking about Melodies and creating ideas for the Track: THE BATTLE BEGINS
It is 8PM night time, right after I just came home from work and school. I fired up the computer, mixer, keyboard, and other connected devices all ready to start composing music for TNE. During a brainstorm session and a piano improvisation session, I was looking at the New Wallpaper Sebastian Kreutz have created. I thought to myself although an ambient track seems more appropriate for menu music, I was requested to provide an epic track, presumably relating to a space battle. This required some referencing to several of John William's previous works with Star Wars. Stylistically, the track "The Battle Begins" is a combination of William's earlier Star Wars pieces from The New Hope and more recently Revenge of the Sith.

Writing, Recording, and Mixing
While John Williams was writing Star Wars, he was only responsible for writing music. In my case however, to bring high quality realistic orchestral sounds to Star Wars The New Era, I had to write, record, and mix this time. All of these three can be quite time consuming. 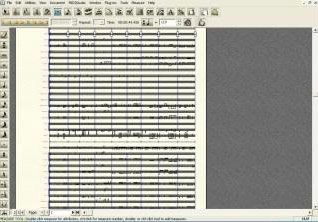 First, I open up the Music Notation program called MakeMusic Finale 2008. I open a pre-existing sheet music template for a full orchestra consisting of woodwinds, Strings, Brass, and standard orchestral percussion such as Snares and Timpani. After setting the tempo, timing, and key signatures, I start composing music and the orchestration process begins. 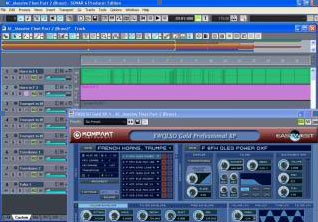 After completing the score, the next step would be the recording process. Instead of using a VST softsynth called Garritan Personal Orchestra provided from Finale 2008, rendering the new piece with the East West Quantum Leap Symphonic Orchestra is more preferable since the samples provide realistic reverb trails and are recorded in full stereo sound.

Essentially, I opened up a sequencer, imported the MIDI file which is the music score in MIDI format and began adjusting notes through Piano Roll view. Before the adjustments, it is extremely important to load the instruments from the EWQL VST (Virtual Studio Tech) plugin and properly assign the Virtual Instruments to their respective MIDI channels. For example, you want to assign the first violin patches to the first violin MIDI channel. Assigning articulations and effects are more advanced and complex, which I will not go into right now. 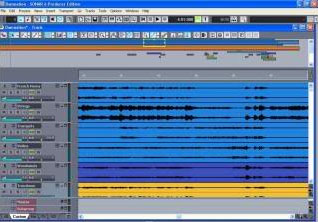 The last process would be the mixing process, where I mix all the instrument .wav files into one multi-track audio mixing process. Here I can do equalization and putting in audio effects.

please get this game out soon. really want to fly around in the Andromeda and explore, and fight enemies with the most badass warship in the commonwealth.

Put this thing on kickstater, get some cash behind you and smash this game out of the park!

You can't download it, the project is stuck in the event horizon of a black hole...
Check after 300 years

mine to got stuck around one

Unfortunately, the engine we planned to build on isn't progressing as good as initially thought. We're in idle state until it reaches the capabilities we need for the space/planet transition. Unfortunately, I can't tell when that's gonna be since that's not in our hands :(