If we'd known what we were getting ourselves into, we'd have run away screaming...

If we'd known what we were getting ourselves into, we'd have run away screaming. The Nameless Mod for Deus Ex stands out for a couple of reasons. First of all, it’s a single-player total conversion, which isn’t the easiest or most popular category of modification on the Internet. Secondly, it’s enormous: The Nameless Mod features over 14 hours of voice-over. The average length of a play-through is 15 hours and that’s just playing one of two significantly different, mutually exclusive plotlines. Third, and arguably most notably, The Nameless Mod has been finished and released to very favorable reviews. The project was in development for 7 years, 2 months, and 11 days by an international team of hobbyists who never met each other. It placed enormous demands on communication, leadership, quality assurance, and to top it all off it started as that most reviled of genres: forum fan fiction.

The Nameless Mod for Deus Ex, released 9 years after Ion Storm's magnum opus, strives to reproduce the multi-linear design and unique aesthetics that made Deus Ex such a widely beloved classic. While expanding on Deus Ex's core gameplay, the Nameless Mod also introduces players to an outrageous new world which is at once an homage to — and a satire of — Deus Ex, its community, and the Internet at large. Playing as Trestkon, a respected veteran returning to his old Internet forum, the player is charged with investigating an apparent abduction which takes him deep into the history and politics of the community. 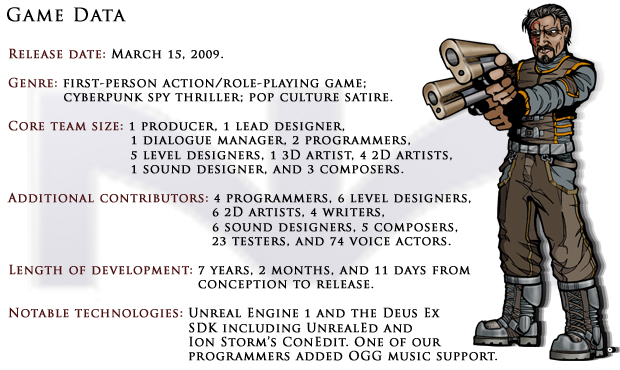 I would be lying if I said we had a game of TNM’s final scope in mind when we started out in January 2002. We were originally planning a single “fan-mission” – one or two maps connected by a simple, quickly grasped plot, with the twist that the characters in the mission would be based on the users of GameSpy’s PlanetDeusEx forums where the team was formed. It was a premise that betrayed our low expectations for the size of the audience we would be able to reach: we were just making this for our own community. However, the self-indulgent concept turned out to be a huge help in attracting qualified help. Everybody who joined got to be a character in the story, and who doesn’t want to see themselves in a game? As the team grew, the scope of the project slowly grew as well and the concept was expanded. We decided to take it even further, making the plot actually take place on the forums, in a virtual world inspired by the stories and the imaginary spaces we’d created for each other.

The most central part of the concept was never actually discussed nor given thought for the first large part of development. It was a given, an unspoken rule that we all agreed upon: we would remain loyal to the original Deus Ex gameplay. Unfortunately our project initially suffered from a lack of conscious design. We didn't have a lead designer until a couple of years into the project (I was a dedicated writer to begin with). Nobody was responsible for analyzing and recreating Deus Ex's gameplay, which is why our initial designs missed the mark in several important ways. Our first concept was designed to be one very large hub level with complete freedom to move to the connected maps and handle the missions in any order. A prototype of the hub map revealed several problems with the single-hub structure, greatest of which was Deus Ex’s old Unreal Engine 1 and its hard limit on level size.

Through four revisions of the first design, we eventually settled on a design more closely matching Deus Ex’s own structure: a largely linear plot with branches and variations along the way, taking you through several hub levels. Unlike Deus Ex, however, we chose to branch the main plot into 2 parallel storylines early on. We also chose to connect our three hub maps and distribute the missions across them all so the player could move freely throughout the game world with a single “point of no return” about half-way, giving us an opportunity to reset the game world and move time forward to show the effects of some of the player’s actions. The result of these decisions was a game structured much like Deus Ex with far more freedom for the player to change the plot and far more optional content, but also a significantly shorter critical path. 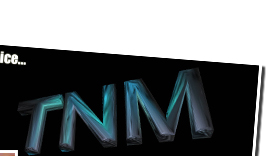 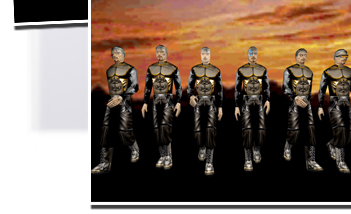 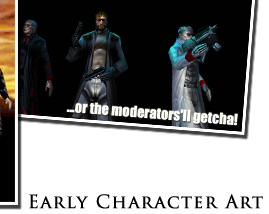 Initial development was incredibly chaotic. We had no well defined team structure and no communication infrastructure to coordinate our work. Level designers began to build maps before the plot had been written, characters were created based on the online personas of the forum users and were then written into the story afterwards, and weapons and items were constructed on the basis of a cool idea with no thought as to how they would fit into the game. The design documents were retroactively written around game assets that were already being created, taking input from everybody on the development team and anybody else who cared to contribute on the forums.

Over the course of several years, we gradually got a handle on the project. By trial and error, we worked out a sane workflow and a reasonable team hierarchy, established reliable communication channels, and developed a solid understanding of our own project and the game it was based on. Whether by natural evolution or a lack of imagination, our final team structure was very flat, with our producer Lawrence Laxdal and myself functioning as the intersections of all communication. We became more demanding of our contributors and learned to quickly let go of anybody who didn’t keep their promises. Moreover, we all became better at our respective crafts. Though this was a benefit for obvious reasons, in terms of scheduling, our perfectionism proved to be a problem. We estimate that 90% of everything we created in the first 2 years was later replaced, redone, or removed as our skills improved and we saw the flaws in our previous work.

When almost all our level assets were completed and we had a playable alpha, we took a good hard look at what we had done and what we still needed to do, and then we began to cut down on the feature creep. We’ve almost regarded feature creep as a form of currency with which we’ve paid our team – for every hour somebody has contributed towards finishing the game, we had to let them spend X amount of time working on their own pet features. As the project neared completion, we reduced X until the project entered feature lockdown around the summer of 2008. By this time, only the most dedicated team members were left. 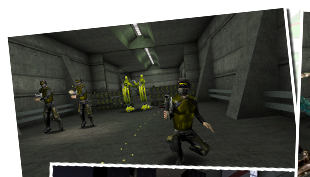 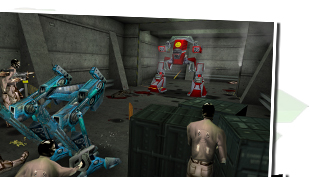 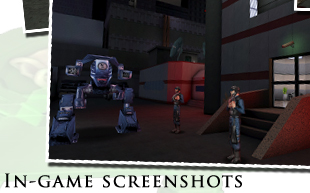 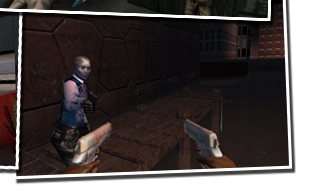 The final stage of production was dialogue audio and quality assurance. The process of recording the over 195,000 words of dialogue in TNM began several years before release and is notable for making use of a large amount of professional or semi-professional voice-over artists who contributed entirely for free. For this enormous project, we created an online database system which kept track of every character in the game, every conversation node attached to that character, each character's actor, the status of their lines, and which of our audio engineers was working on them or had worked on them. Early on, we recruited somebody specifically to oversee the voice-over process, and towards the last phase of the project, Lawrence and I ended up spending most of our time helping out as well. We always knew the large amount of volunteers would be a liability to the time frame of the project, but in the end we managed to wrap up the recording process about a month before we were finished with QA, much to our surprise. Three release candidates later, The Nameless Mod was finished.

that's a remarkable story, my congratulations to the nameless mod for dedicating themselves to build such a mod. And dare I say a role model for single-player modders.

I bet the next section "Things That Went Right" starts with the bullet point "Designing for the niche". Where, you ask, do I get my ability to see the future?

On the Game Career Guide, where this article (and all the parts of it yet to be posted here) was published more than a month ago!

Good call ModDB, I guess? The article in its entirety is quite good, albeit a bit on the rambling side.

Doesn't mean that everybody read it already. Besides, I like the way it is/will be presented here better :P

It certainly does look hella good with your layout :o

Yeah, I'll agree with that :P should have kept the level design flow picture in though, I thought that was the most interesting bit of media in the first part!

I can't believe you guys worked on an outdated engine for 7 years
I don't know if that's good or bad, but its definitely impressive
I think...

Thats kind of the wrong way to look at things in my opinion.

yeah. What has to the an engine with it? a mod is about the creative content it has, not the graphics it possess... it would be absurd to compare mods made with different engines

"ModDB is working with the developers of TNM to pull back the curtain on Deus Ex's greatest mod." That's quite misleading. Not a lie, but definitely misleading.

Still, good to read, so whatevs.

But you haven't seen everything yet.

Wow, fantastic job on they layout, stenchy! Thanks for whipping all that text into something a whole lot more interesting!

Figures I have the second Deus Ex....

Well... if you pop by the OTP forums, we may be able to help you out. It won't even involve any copyright infringement : )

I would also like to say, it's awesome to watch a mod from the start to end and you look back at an article like this and still remember when the "Early Character Art" was unveiled and it was all you had to gawk at :P

It's awesome to hear from people who've stuck with us for the entire wild ride!