An article about the major changes in gameplay made to the CoH in the Battle of the Bulge mod. To help understand how better to play BotB

First off we just want to remind everyone to vote for us as one of your favorite mods of the year!!
...now to business...

Today we are going to be talking about the major changes made in the Battle of the Bulge Mod for Company of Heroes and Company of Heroes Opposing Fronts. Hopefully, this will serve as an introduction to those of you new to our mod, and as a refresher for those of you who have been playing for awile. It is our goal to show you some of the concrete changes that will affect your CoH playing style, and in turn make you a better BotB player!! 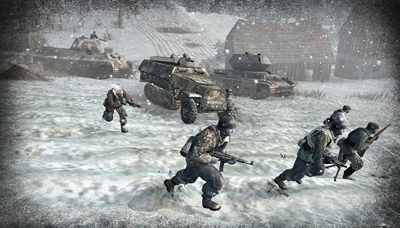 Doctrine based Combat Groups have been reduced in numbers,and heavier restrictions, to lay more emphasis on buildable units. There are also some tweaks to Doctrine abilities, as well as completely new ones.

Graphic Enhancements and Maps in BotB 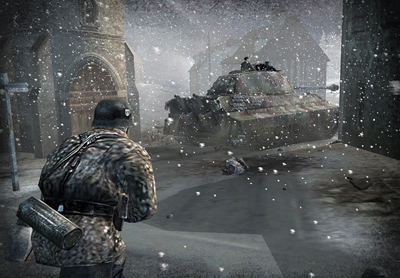 Battle of the Bulge contains 18 new maps and again many tweaks to the graphical output. In Battle, there are no more territory borders, building or unit selection markers visible.

The same Combat Group entering the village of Foy 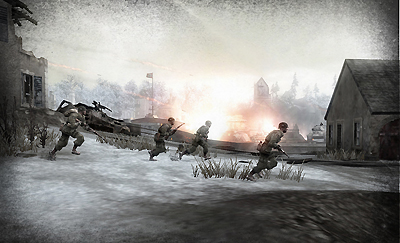 Unit sight range in new BotB is now dynamic. As a unit moves, its sight range derceases, as well as the weapons accuracy. That gives non moving units advantages for defending. On the other hand, moving units are harder to hit. A sprinting ability has been added for all combat infantry, thus decreasing sight range even more, but very useful for quick hit engagements.

US Airborne attacking, with Calliope Support 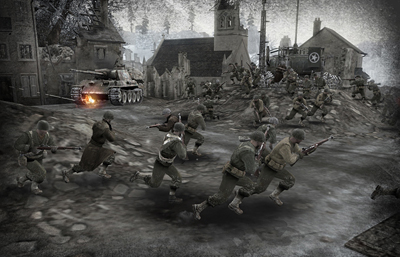 Urban combat in BotB has been reworked for the new version. Abilities like Grenades, Stickies or Fausts are now usable from within buildings. Units in builduings become invisble and can only be detected within 20 meters,giving them good ambush opportunity, as they can now all hold fire when inside a building.

Alongside the US M21 Mortar Carrier Halftrack, a Panther converted to M10 and of course the good old Sturmtiger, Jagdpanzer IV and Maultier, BotB continues to add new models to the Force Pool.
Lets see what the OE can deliver later on. 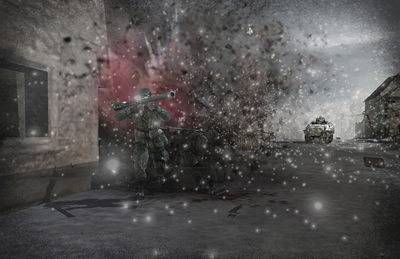 The US AT team got an Axis counterpart, the Panzerschreck team. As in reality, ATs now are operated by specialized crews and can't be upgraded anymore. The Loader provides support for the gunner, shortening reload times and therefore the Gunner can concentrate on aiming and has better accuracy. Both, Schreck and Bazooka teams can ambush when in cover. 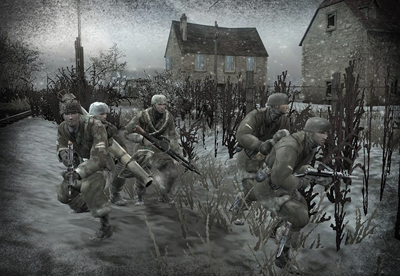 This will be the last occasion to see an Infantry squad armed with a Panzerschreck. As said before, Schrecks are now operated by Specialists, handling the weapon more effectively. But of course, Line-Infantry still has the opportunity to fight aginst tanks. All German Infantry units are upgradable with Panzerfausts now, but each bundle has to be bought for the individal unit. 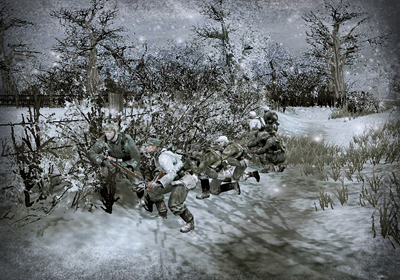 In BotB you cant do upgrades in the middle of nowhere anymore. Infantry can only purchase them, when they are near an HQ or Forward HQ. Vehicles need to be at a repair station or supply yard, where the upgrade can be applied. Volksgrenadiers now can make use of Grenades, too. Why shouldt they ? At least they are not very good at it, but they can learn how to do it better. So do all others.... 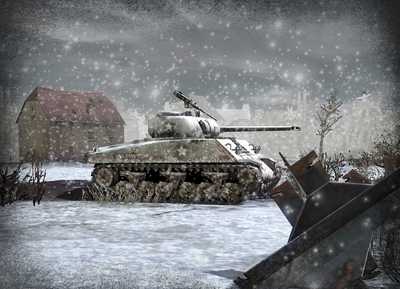 You thought that tanks were already a threat in BotB ? Well, fasten seatbelts, please. Courtesy of Blitzkrieg Mod, all ballistic guns ( Tanks and ATs ) were majorly reworked, using historical penetration data. One Shot Kills will often be seen, and the appearance of a Kingtiger will freeze the Allies Commanders blood.( As long as there is no M36 nearby

) Turret rotation speed and reload times have been set to historical values, when available. 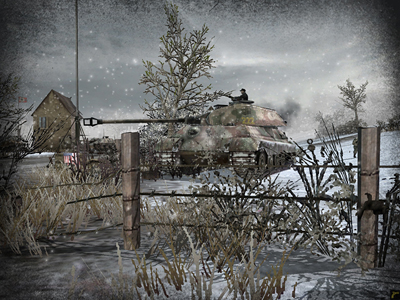 Range stays about the same, (as in old BotB of course, much more than in CoH) whereas AT guns generally have a little more range, due to balancing reasons. AT guns also camouflage when in cover. Flanking of tanks has become even more crucial, as you will experience frontal penetration of panthers and Tigers as a rare gift. Commander and Gunner upgrades increases the tanks sight range, movement decreases it. Veterancy gives them hidden abilities, hold fire button prevents them to fire at will. So prepare for some harsh engagements... 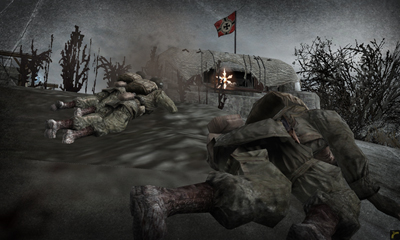 Well, alright. A Bunker. Ever found it strange, that Bunkers and other heavy emplacements can be built within minutes, as the concrete normally needs weeks to dry ?

Well, we did. In Normandy, such Bunkers can make sense, as the Atlantic was heavily fortified. A lone forest in Belgium ? During a surprise attack ? No way. So Bunkers and MG Emplacements have been removed, (base defences not) and other defensive abilities have been strengthened. Medic and Repair Stations can be built separately, Tank traps are totally uncrushable and must be blown with charges. Barb wire has the chance to ruin vehicles tires or tracks when overrun. Mines costs have been lowered. 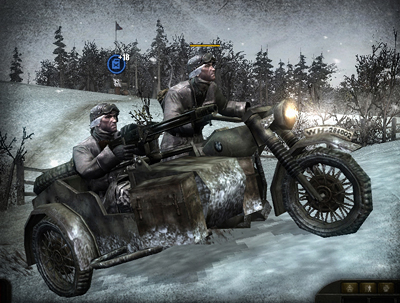 As the new visibility system is now in, combined with the new range of tanks and AT,seeing the enemy before he sees you is key to winning a battle. BotB provides your scouting units with toggelable Binoculars. When stationary, Your scouting units (Scout Infantry, Cycles Jeeps) can make use of it, increasing their sight range. While this is active, the unit can't move before untoggled. Scout Cars like M8, SdKfz 222, 234/1 and 234/2 can't use them by default, but can do so with earned Veterancy. 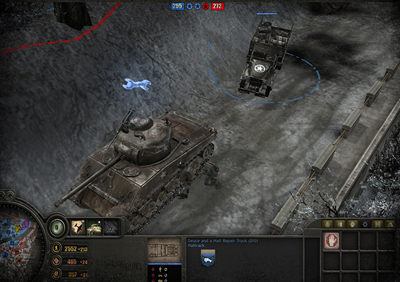 The repair teams have been altered for the new version as well. Old ones were quite charming, but had some disadvantages, they took long to run over the map, got lost, repaired what they wanted aor not at all.Not really the kind of obeying orders you are used to in the military.

New Teams work differently. First of all, ALL german Doctrines can build them in the Kriegsbarracks, but need to upgrade to Assault phase first. The new team consits of two units. The Squad is loaded in a truck when produced, and has to leave it. Repair is now targetable again, so you can repair ATs guns. The truck itself is quite important. It contains all their equipment, and when near, the engineers repair faster than without the truck.

The new BotB Version features AGameAnXs ATC Script. What exactly is this, and how does it work ? First of all, it doesn't change anything to the resource mechanics. Captured territories still deliver the same old resources of Manpower, Ammo and Fuel.

What ATC does:
It completely replaces the method of capturing for CoH.
Normally, you used to send your troopers to a single point in a territory and
they raise the flag to have it captured for their nation. If the enemy wants to capture,
it has to first remove the flag, then raise their own. Not a bad system, but not very realistic, either. How do you capture a territory in real life ? Well ,you repell any enemies from the territory and move your own in. This is the way ATC does it. Almost. In fact, it uses numerical superiority.

On the top left of the screen, you see a percentage value of the territory where your mouse is pointing. The percentage value ranges from -100% to 100%. If you have more infantry in the territory, the value raises. If it is higher than 25%, the territory is yours. When you still have soldiers inside, it raises up to 100. It still raises when no soldiers are inside, but significantly slower. If the enemy has numerical superiority, the value decreases and when less than 25%, the territory becomes neutral. If the value is lower than -25%, it falls to the enemy. The same with strategic points.The superiority is NOT defined by squad count, its defined by soldiers count. The bigger the squad is, the faster they capture. A 10 man rifle squad will always be able to hold the territory against an 8 men Volkssquad, f.e. The Strategic points totally disappear from the battlefield, but still are visible on the tacmap, so you may still be able to give command queue orders. Observation posts have been taken from the game as well. Your own territory is blue, neutral territory white and enemy territory red.

The same with strategic points.This system is much more real-life than the original one, and although it has some graphical bugs, it is now our weapon of choice, as it really adds to the realism, which is the No.1 goal of BotB.

So far... Strategic points colours are totally messed up... dont look at them. The territory DOES
deliver the supplies, if you own it. On the Big Tacmap, territories randomly change to white, as if they are neutral. They aren't. Don't let that irritate you. Have a look at the thick main Border, that is always correct. Or have a look at the minimap, where territory colours are displayed correctly.

These conclude the major changes in gameplay made in BotB V2 (but not the hundreds of minor ones!). You will find that playing BotB is very unlike CoH, with the many changes that have been made to gameplay, it is in fact an almost totally separate game. Sure a lot of the things are still present, base buildings and the resource system for example, but the actual combat abilities, survivability, types of units, behavior of the units, and the AI, etc, mean that the tactics that one uses in VCoH will not necessarily work in BotB, in fact they hardly ever do.

It is best to approach it as a different game that uses the essence engine. So go ahead and download BotB V2 and enjoy a great single and multiplayer experience!

Sounds and looks brilliant guys... A lot of hard work and thought has gone into the direction you want to take... detailed media release... top job...

The best mod for coh
I do translate into chinese [support only ]
link: Game1.ali213.net

Thanks, I just wanted to post this up here because there has been alot of debate going on about some of the new things that have been implemented (new armor system, atc) and I wanted to make sure everyone had the facts.

Great work guys!! I'm curious as to how you got the OE working ;)