We got many mails and questions on forums about Lost Alpha project levels list. We feel we discussed it many times, but topics are growing, and no one likes to read back, so we decided to make this list to make it clear for everyone. This is the final list, no maps will be added, or removed.

Some level editor screens of our deadcity in production, back in 2009: 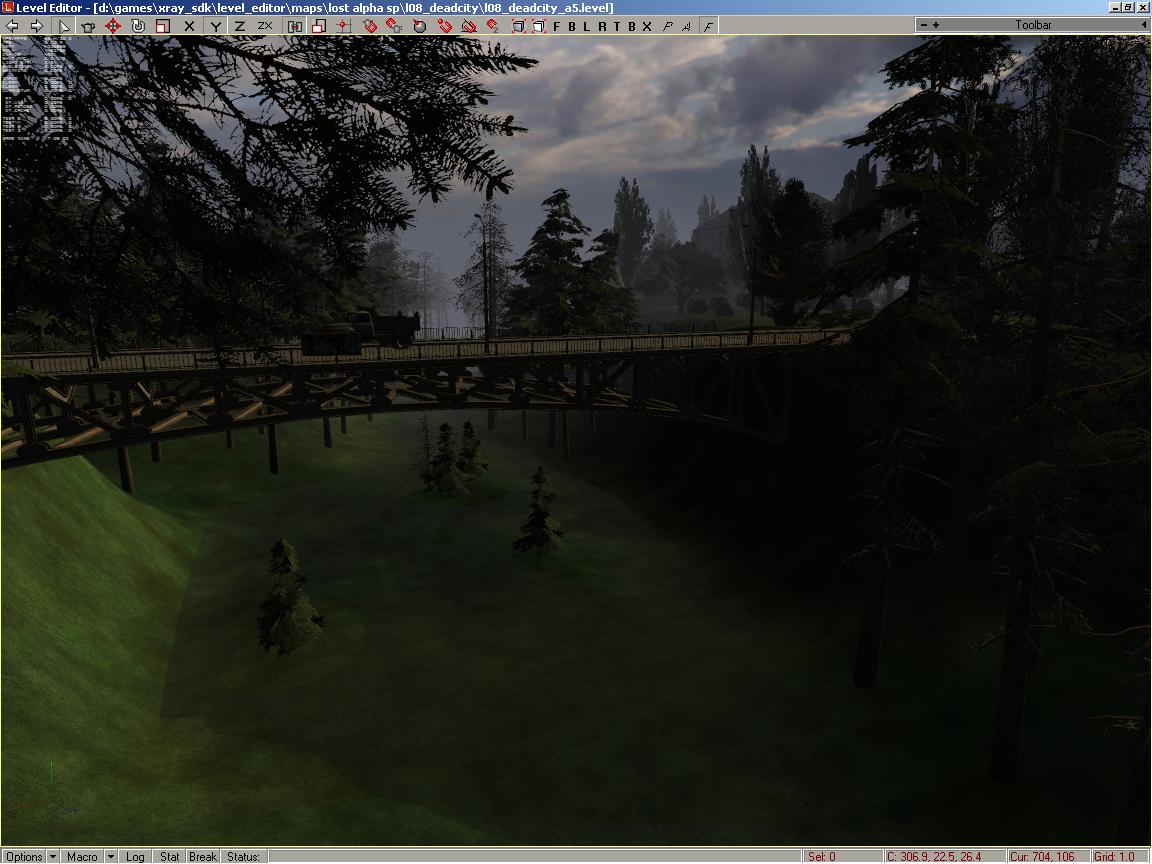 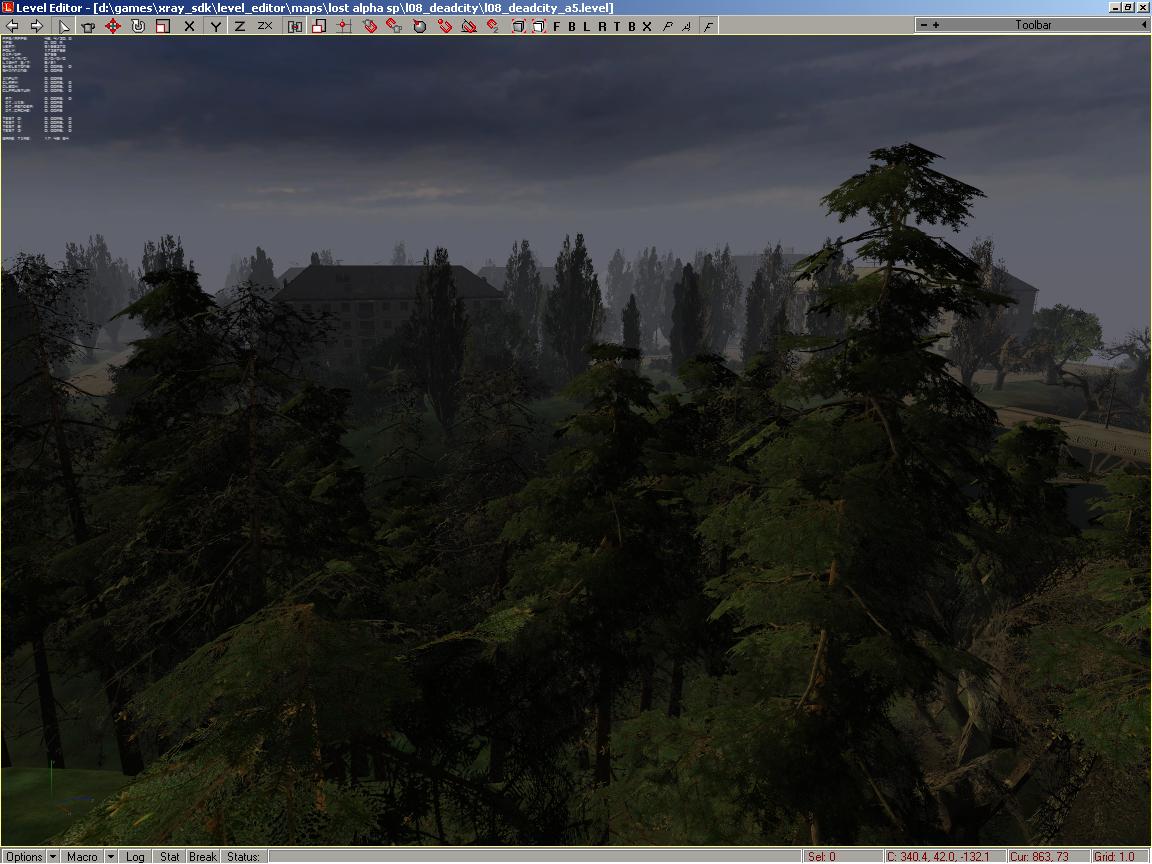 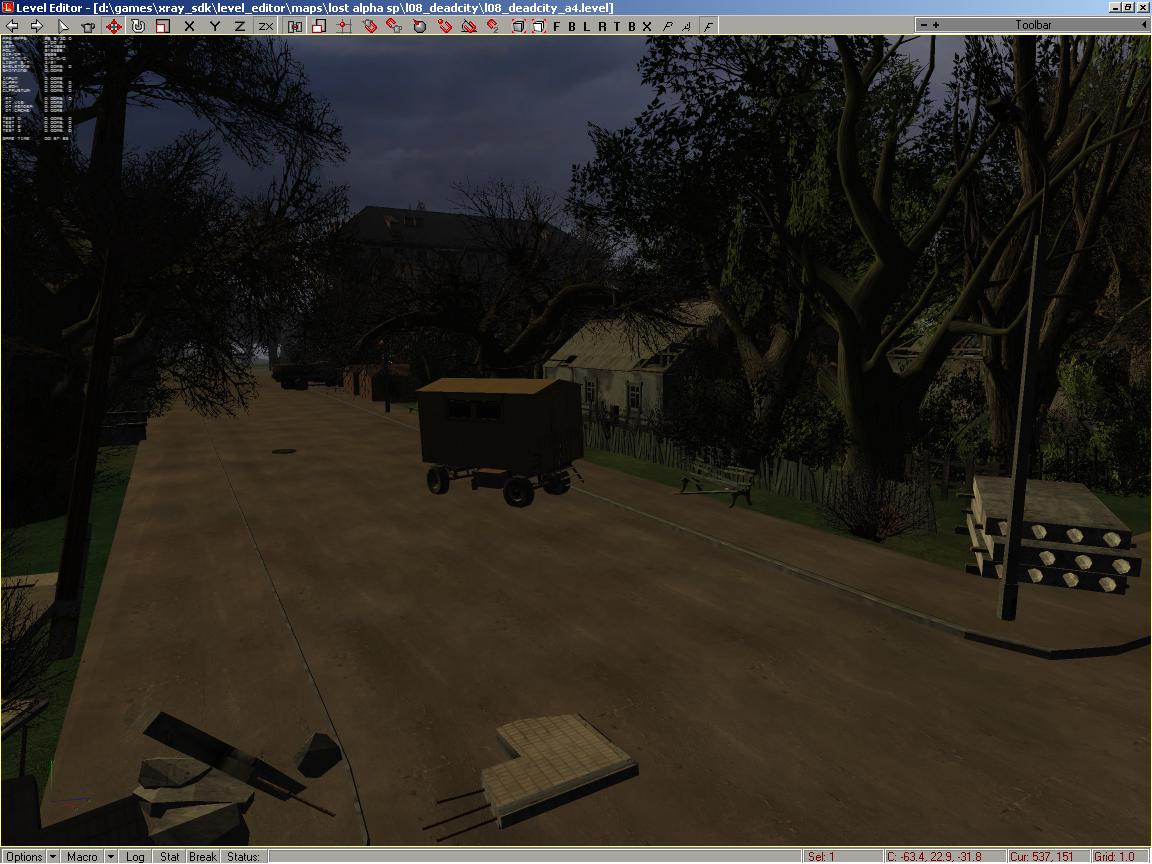 A level editor screen of bar-rostok from 2009: 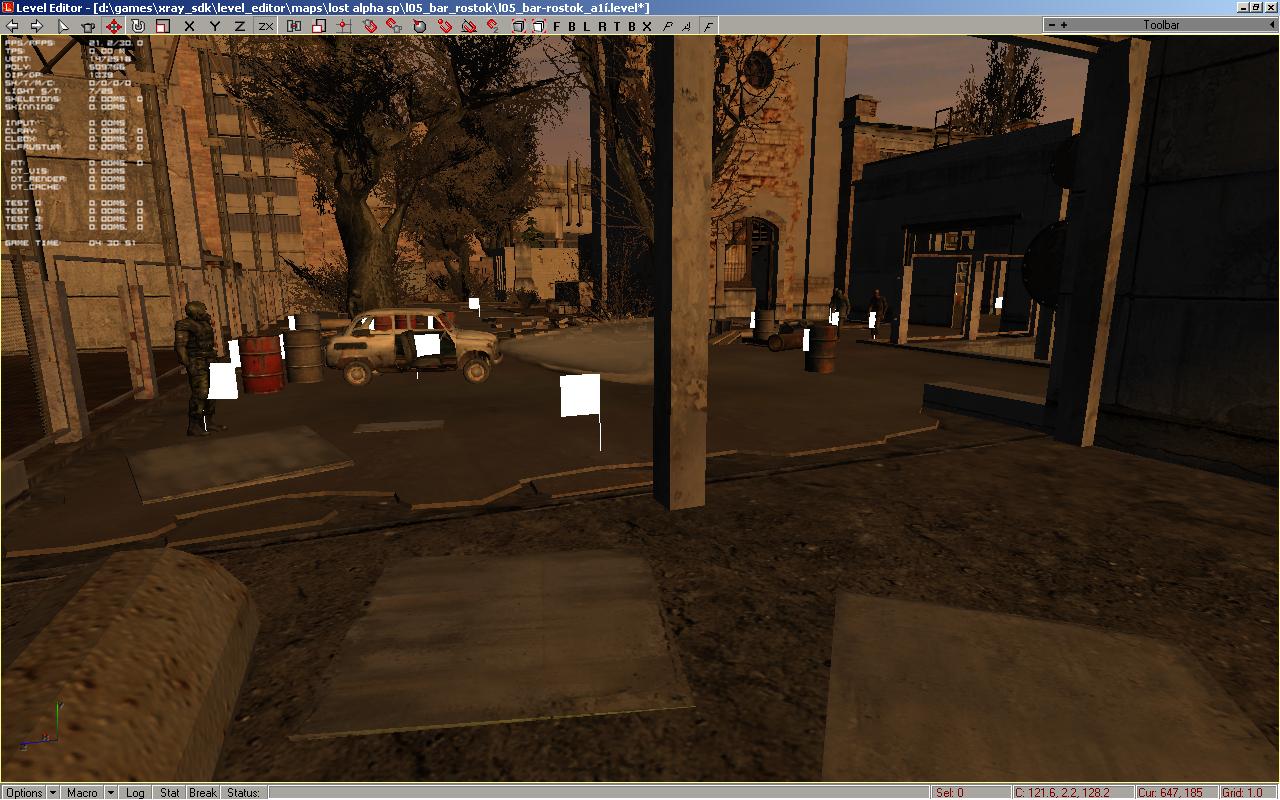 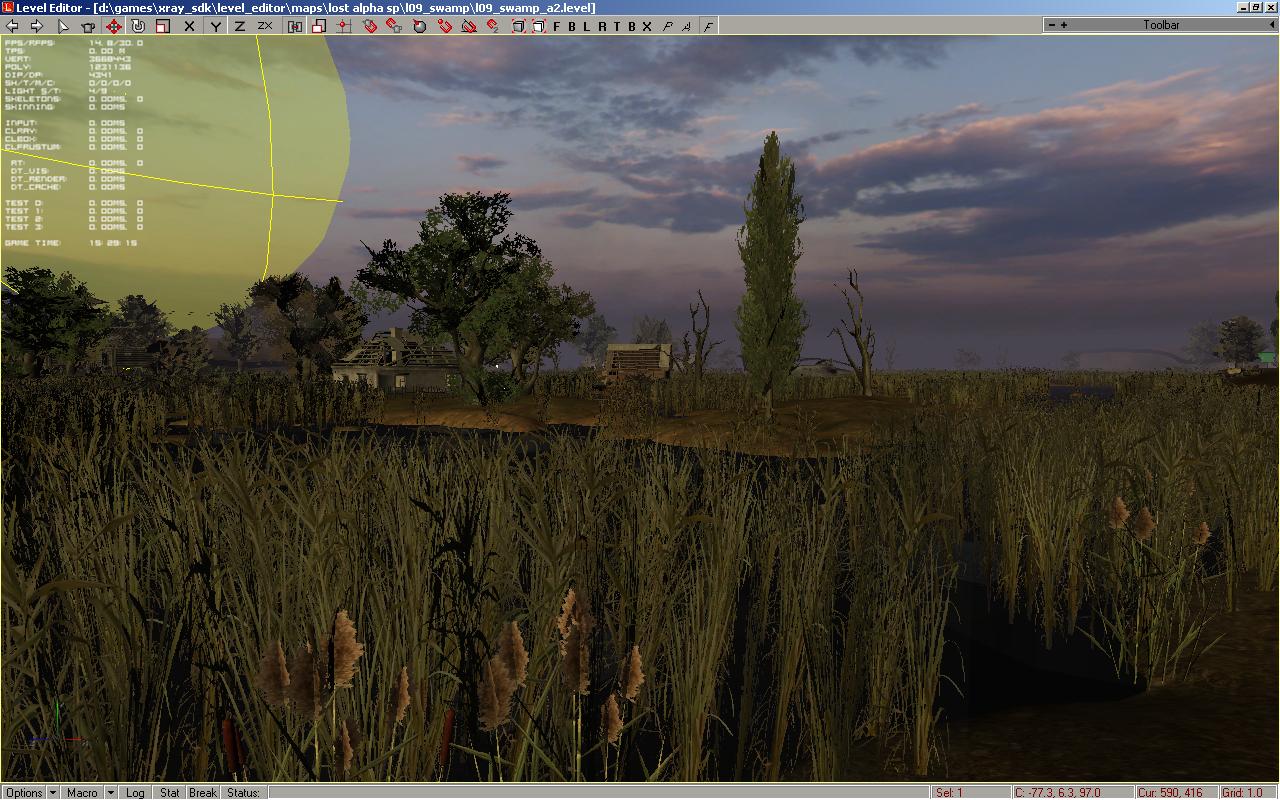 keep it up... you might find some other tips in the official alpha release of stalker...

Cool. Never seen the level editor before. Looks quite awesome.

Wow, you're making great progress from the looks of things! Can't wait to play. :D

we fixed and modified 1935 cordon, so we will use that one

Thanks for answer, and what about Darkvalley? 1935 version is so unfinished and empty, but release version is boring...

we finished darkvalley/darkdolina (we like this old name better) from 1935 build, so it looks nice now :)

That's damn good :) Interestingly to know the fate of Pripyat and Stancia locations, the most main maps of Stalker )

great work so far but is that last pic the old swamps or are you ever going to add it.

Very great work Lost Alpha Project Team ! Your mod seems so good ! AKM was a revolution from the East, but there you are about to unleash hell upon us ! ... To give us a part of what Stalker was before THQ turns it to pieces : )
Keep going! And Good luck :)

How big is pripyat gonna be anyway? sounds big, only 60% done

Hi dezodor, I was wondering if you'll be making the Cordon factory in 2003 style? This is a pic from the 2003 THQ tech video and it shows the Cordon Factory interior near a sealed off main entrance (the right one) with a Niva parked inside it. A train and a Kamaz truck are also inside the factory (the left building). If needed, I can provide more pics for proof and comparison.
Img84.imageshack.us

Sorry, made a mistake. The Kamaz is in the right building of the factory. Also, next after the right double door entrance is an additional chamber with a movie projection screen and a white Niva parked inside it, to be precise. Was only there for showoff purposes. I really have no idea why the locomotive was in the left building though. Screw it anyways! The only thing I'd really like to see is the tiles and a red lamp inside the chamber, as shown in the pic and video. A minor thing, but would sort of bring back the nice memories of one of the first Stalker vids.:D

i tried out that style already in april, but the train does not fit there... the rails are not connected to anywhere, and its only suitable for minecarts. the kamaz looked ok in the other building, but in dx9 it will never look like the same as in 2003 video. that glow on the walls is probably some old shader thing. i changed the wall textures to this green one, and tried to make them reflective in dx8, but it looked crap, as for dx9 it needs bump map editing to make it more shiny, but it wont give back the 2003 feeling.

we had some fear about the npp level, since its too big... and hard to fill it since you can easily make a map which wont work in game :d

currently -just to say some technical info- it has 1million static, and 2.7million mu vertexes. so 3.7million... scary isnt it? yet it runs fine with some optimisation.

I can pripyat "crashed"
but then dont you just have to remove some item to make the level "lighter" and easier to run ?

sorry, dont understand :) could you explain?

I think he means that you shouldnt trash pripyat level, only removing some items to make it lighter to run

we trashed it because of the concept was wrong... not because of it was slow or didnt work in game :)

Yea i understand i just translated libebellule's comment for you

I meant : "I dont understand why pripyat "crashed""

doesnt really matter anyway :) the new one is almost done...

So, is the level editor the program Maya (by the company Autodesk)?

Or is it some kind of SDK? Sorry; don't mean to be annoying... just wondering (as the interface looks somewhat like Maya).

Yep there is a SDK, but that´s only for importing it to SoC.
Youre right a Leveler has to create the basic level in Maya.

OMG OMG OMG OMG! It lists most of the levels as done! Oh, I am so, so thrilled... can't wait, Dez0wave. It looks too cool to be true.

I mean, seriously: ALL the cut maps, plus Pripyat (not in earlier builds), and others!? WHAT MORE COULD YOU WANT?

This is so cool. I am just a huge fan.

So the only thing left is this 'bonus map'?

I'm guessing its from one of the other games. Maybe the other half of Pripyat from CoP?

Or even more likely the mayan level from the earliest builds.

What I'd like to see, would be a sewer system( under Pripyat or Limans for example) Can't get enough of anxious undergrounds and Snorks poppin' out of nowhere. I've lately tried playing with static lighting. HUGE performance improvement without killing the atmo...

Are you using a time-slowing artifact, so you can level-design faster than light?

LOL? No, you know those are using Enlight 256 light based CPU - you wrote it on official site's chat.

a level between pripyat and deadcity.

O_O so you just create all those locations starting from zero ?