The retail version of Killing Floor has been unleashed upon the masses, have you played it yet? (purchase here!) ModDB will follow up with its own review in due time. Until then, however, may our interview with Tripwire Interactive's Alan Wilson satisfy your interest. Alan's point of view represents the flip-side of the collaboration that went on between original members of the Killing Floor mod team (detailed in Alex Quick's interview) and Tripwire:

ModDB: What was the decision process that had you choose to bring Killing Floor to the retail space?

Alan Wilson: Alex prodded John (Gibson - Tripwire President) about porting to Red Orchestra. John took an interest and did a port over the weekend, mostly to prove a point to himself. Then he realized he was enjoying it. A lot. So on the Monday morning he started badgering me about it. He and I tend to have some similar tastes (exceptions being he likes Battlestar Galactica and I like Top Gear, but whatever). We started playing the mod — and played for a couple of hours.

So then we went into a blitz of budgeting, planning, and more budgets. What might it cost? Engine licenses? People? How long? Will anyone buy it? We sat down the lead team here and discussed. Eventually, we got to a decision that said, “If we can do it for $x then it is a go.” John discussed with Alex, Alex discussed with the mod team and the decision was made. Then the hell started :) 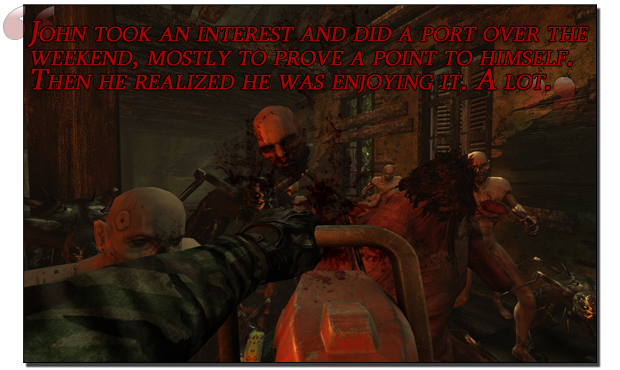 ModDB: Being former modders yourself, you must understand what Alex is going through. Can you describe how it felt for you and how much of that do you see coming out in Alex now?

Alan Wilson: Alex hit the nail on the head in his piece. You suddenly have to stop just trying stuff out, messing about with off-target stuff — instantly. Refocus from what odd, cool little things each contributor fancies stuffing into the mod and focus on a very coherent whole. Suddenly, you actually have to have a concrete vision and everything has to fit within it. It IS a hard transition to make. We certainly saw Alex hitting that wall — he has spent 4+ years tweaking stuff and fiddling just however he pleases. Then suddenly he couldn’t. There were a few moments of, “Yes, Alex, it would be lovely to include the self-detonating zombie kitty, but NO! GET ON WITH THE REAL WORK!”. I’d have to say Alex took it all very well. Oh — the zombie kitty is MY idea, so no nicking it!

ModDB: In total, how many people from the original team did you recruit for the development of Killing Floor?

ModDB: What kind of design alterations, in terms of the mechanics, did you guys decide to make for Killing Floor retail and why?

Alan Wilson: We took Killing Floor on for the core gameplay — that was always our key criteria. So the core gameplay doesn’t change. Everything we did was based on figuring out what makes the game fun and enhancing that, combined with figuring out what obstructs the fun and eliminating that. Killing Floor is the sort of game that (to steal a quote from a friend) allows the player to go to hell and kill their demons. I am a strategy/tactical gamer by nature. But dual hand-cannons, in ZEDtime, with a face-full of specimens still has me RAAWRRRRing at the screen and laughing.

We added in multiple trader locations to encourage people to move around the maps, having to balance strong defensive positions against the need to go shopping. A LOT of work on balancing weapons, monsters, wave configurations. A lot of interface work so that it is really simple to set up and run a game, to get into a game. Working on the difficulty levels so that players of all abilities can enjoy the game. 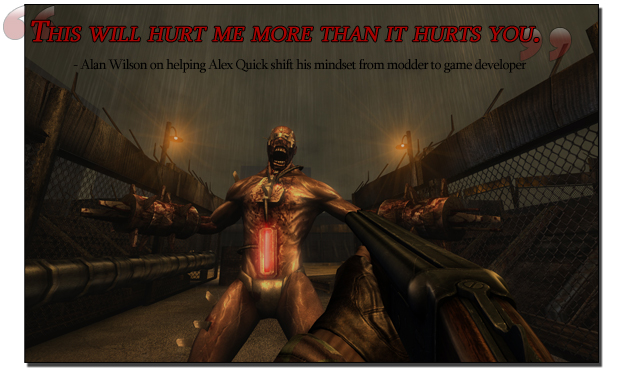 ModDB: How long did the conversion from mod to retail game take?

Alan Wilson: Full-on, about 6 months. But some of that time has been just too damn hard!

ModDB: Alex talked a bit about shifting his mindset from "modder" to "game developer", what was it like helping Alex along that path?

Alan Wilson: “This will hurt me more than it hurts you?" Ok, to be fair, Alex had the “instant” version of this transition. Thank the gods, he listened and learned as we ranted. It was a bit of a crash course for him and we didn’t really have the time to be too gentle about it! On the other hand, it is genuinely rewarding when someone listens and learns. I think he’s done very well (and how condescending is THAT? :D)

ModDB: When Tripwire was just starting out, did you experience the same kind of shift? How difficult was that for you?

Alan Wilson: Less so for us. We’d already had the forced disciplines of the MSU (Make Something Unreal) contest phases and deadlines to cope with. We just had to learn about the whole business side in about 3 months flat, without going broke or being fleeced by the publishers!

ModDB: Are you currently looking for any other mod projects to bring to retail?

Alan Wilson: Actively looking, no, we don’t have the time with 2 projects on the go. Once Killing Floor is out the door, and successful, it seems highly likely! 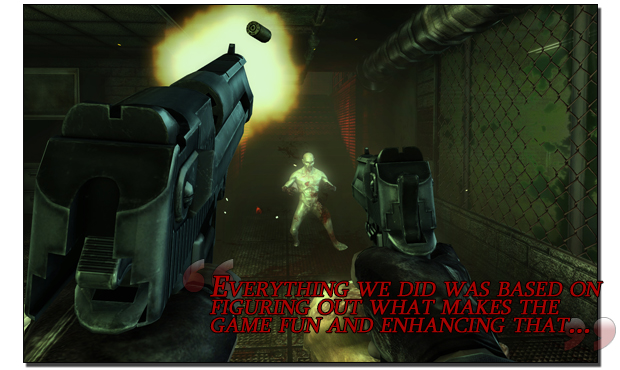 Thanks to Alan Wilson for the interview. Killing Floor is now available on Steam.

Great job by everyone invovlved. This is what makes modding fun and inspiring. Glad that your team got the recognition they deserved and it seems tripwire just keeps going from strength to strength

Yeah, the game's great except that the latest patch has broken it. Hopefully it will be fixed soon.

Love the game even though joining games can be a pain in the ***. But well worth the wait.

Loved every last bit of it. No problems yet!

Love how the difficulty is still as good as the original ;D

Excellent game, I've playing it through the night since it was released and almost not sleeping at all. Lovely.
The last patch really seems to be broken and included new problems without solving the others. I still can't host a game in listen or dedicated server modes even after opening the doors in my firewall and in the router and I'm sure that I did everything right. Nobody can see these games on the internet and I have to play them alone. Also when I'm hosting this "solo" game my rig crashes very often (video related crashes I think, not BSOD but the rig freezes with a multicolored screen and repeating sound and I have to reboot using the switch, maybe if I wait enough the BSOD apears), and it is very stable on other games (I play in Vista 64, I'll not in include my specs here cause it's no support page, but belive me, it's a very powerfull rig that runs all games including Crysis on the max without a glitch).
Please guys solve it fast, try to make the online playing more alike l4d, it is really difficult to find working servers. Maybe you should provide these servers for the community.
Also the difficulty increases to much from beginner to normal mode, it should be more gradual.
Congrats for your excellent game.

I bet the big reviewers here are getting paid off so people'll buy the game.

I stand by my opinion, and the others who left the Modding team.

Hey dave_5430, can't agree with you. Like I said, I'm (and thousands of people) playing it non stop. If you don't believe, try to find a server to play in multiplayer. My last refreshes showed more than 1000 servers, almost of them full with 6 players and nobody can play 24 hours a day, do the math. Most of L4D players (including myself)loved Killing Floor. Maybe you should give it another chance.