With Halo Infinite’s phase 2 flight fully concluded, here’s five more mods to keep up the hype until the next time you can get your hands on Infinite!

To ensure the end result is well-rounded and refined, 343 have been shipping testing “flights” intermittently before release. The second weekend of the phase 2 test has finished, meaning the second flight is now over. Until you can get your hands on Halo Infinite again, here’s five more mods to keep you hyped. In case you missed our first editorial, you can read it here:

The Silent Cartographer is a fan-favourite level from Combat Evolved’s iconic campaign, and marks one of the most creative setpieces in the game. Coming at a small moment of triumph, the level is a high note in the story and a fond memory for CE fans. This mod takes the time-worn foundation set in 2001 and enhances it with new weaponry, mechanics, enemies, and an expanded level that greatly extends the sandbox present. New strategies will have to be employed to complete this level, and even veteran CE players will find new challenges ahead thanks to totally original weaponry and mechanics. It’s a great vertical slice of what a full overhaul of Halo’s campaign could look like - which we’ll be touching on more soon. 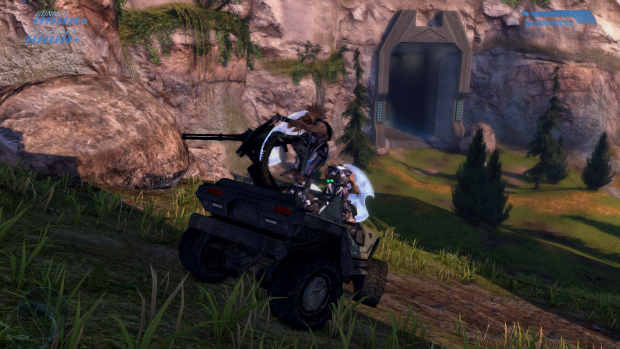 The concept of “you play the bad guys” is a classic and successful formula for mod projects, and Covenant Edition is a great imagining of what it’d be like to be on the other side of the conflict. Playing as all manner of species from the alien Covenant, there’s a variety of play styles introduced by this mod, and new ways to employ the weapon sandbox to achieve victory. It’s especially satisfying to crush enemies as a mighty Hunter for the first time, and much like The Flood: Virulence as covered last week, a good time for any returning CE fan to get a fresh new take on the campaign. 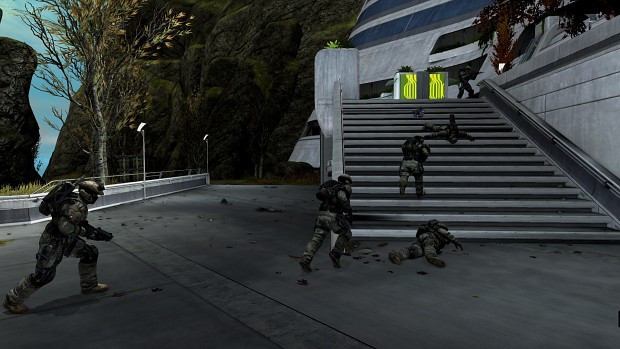 Firefight, first introduced in Halo 3: ODST, is the multiplayer co-op survival mode of Halo. From ODST onwards, this mode allowed players to face increasingly difficult waves alongside friends. This mode has featured solely the Covenant so far (though recent MCC updates feature the Flood and other factions for the first time), but this modder has enabled you to face UNSC assets as a Covenant elite instead! The UNSC make surprisingly formidable enemies and it’s a fun twist on the firefight mode. Play, but be sure you and your friends are up to the challenge! 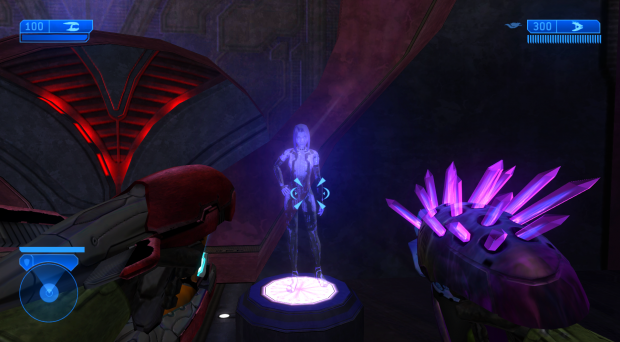 Where the previous Halo 2 mod focused on parity improvements between console and PC ports of the game, this mod instead focuses on overhauling the balance in the gameplay sandbox. On Legendary especially, Halo 2 is notorious for its balance being all over the place, from certain weapons being useless to other enemies being deadlier than damn near anything else (look at you, beam snipers). This mod hopes to rebalance the entire game, provide a fairer challenge on Legendary, and give a little bit of improved functionality to weaponry, all in the aim of restoring the slightly more considered sandbox of Combat Evolved. Halo 2 is still amongst the toughest Halo games, but this mod makes the campaign a little bit more accessible when put alongside its contemporaries.

SPV3 is one of the be-all end-all Halo mods, overhauling Combat Evolved’s entire campaign in ways untouched before. Many features from later Halo games like weaponry, enemies like the brute, and more help bring CE into closer parity with the rest of the series, and meanwhile, wholly original additions to the tools players utilise in the richer and more in-depth combat encounters give SPV3 its own spice of originality. It’s still one of the best pieces of Halo custom content to date, and still enjoying some level of active support, it’s a solid experience for any Halo fan, new or old alike.

Last week, I wrote an editorial going over the first weekend for Halo Infinite’s phase 2 flight, which was focused on smaller team engagements with a little bit of vehicle action right at the end of the weekend. As a brief aside for anyone who missed the first, Halo Infinite is the next big release from 343, following up from Halo 5. It’s the first mainline Halo game to come to PC at launch for years, and to make sure it’s as refined as can be, 343 have been running testing periods - Flights - to iron out issues ahead of time. 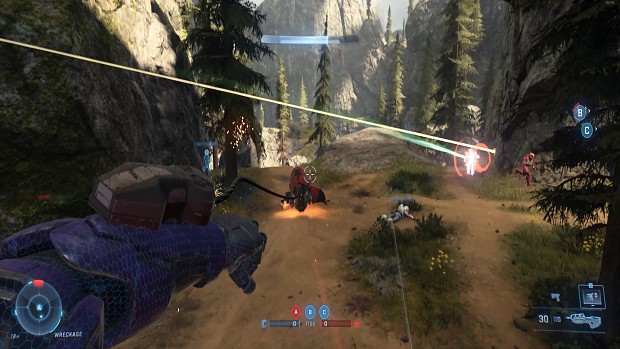 My thoughts on the last flight were that, broadly, I enjoyed the weapons and pickups, though some like the Commando definitely need to be reconsidered in terms of their place in the sandbox, and other weapons like the Heatwave were satisfying but difficult to master. Where Infinite’s weaponry gets it right, it gets it really right; but weapons like the needler and plasma pistol show that the opposite is also true. The weakest parts of the sandbox are really weak. 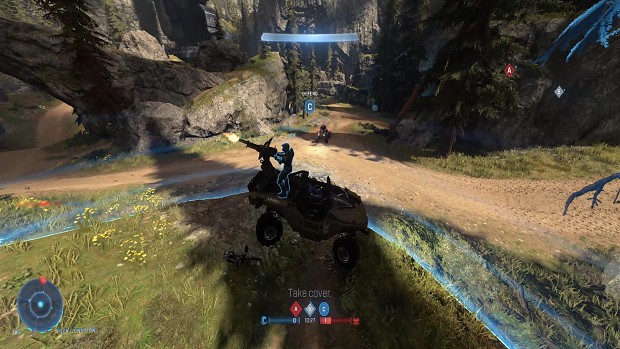 The classic Warthog makes its return, having featured right at the end of the previous weekend
and playing a big part in the newest BtB mode in this part of the flight

Two Sticks and a Rock

Whilst last weekend’s flight had me of the opinion that Halo Infinite’s multiplayer might end up being one of the most formidable and enjoyable to date, this weekend’s flight solidified that opinion in my mind. Whilst I’m mostly a campaign player, I’ve played a healthy dose of the multiplayer of every Halo since Combat Evolved. It’s no secret Halo 5’s singleplayer campaign didn’t go down well with fans, but the multiplayer itself was still excellent. Nowhere did I feel so strongly that Infinite’s competitive modes would be some of the most fun in the franchise’s history than in the Big Team Battles mode introduced this weekend. 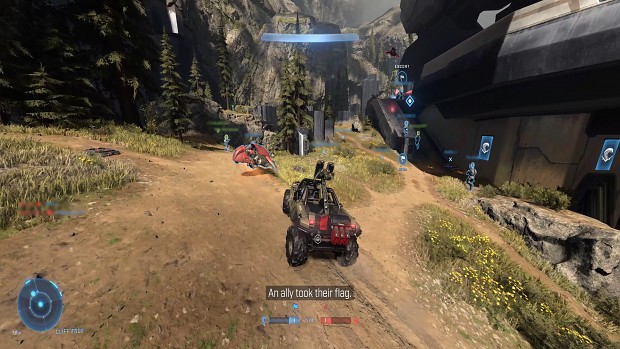 The map featured in this weekend’s Big Team Battles test had all the usual hallmarks of Halo’s vehicle sandbox with the mongoose, ghost, warthog, and scorpion all appearing. Meanwhile, depending on the gamemode, the Wasp (a new addition in Halo 5 as a UNSC air vehicle) and the Banshee are also up for grabs

Every vehicle is hitting just about the right notes. Some of my fondest memories in Halo multiplayer have been belting a Warthog around tight passages and challenging enemies in any vehicle to follow, and all the wheelman kills that follow from competent driving. Nothing feels better than flipping from a cliff in Infinite and crushing an enemy mongoose, then grappling to a nearby Ghost for a quick hijack. All of this frenetic action is enhanced by what feels like a speed boost for all vehicles over previous Halo games. The Warthog takes off, as do the Mongoose and Ghost, and whilst I didn’t get an opportunity to pilot it myself, the Scorpion also seemed to be doing remarkably fast manoeuvres that will be reminiscent of its almost ridiculous speed in Combat Evolved. 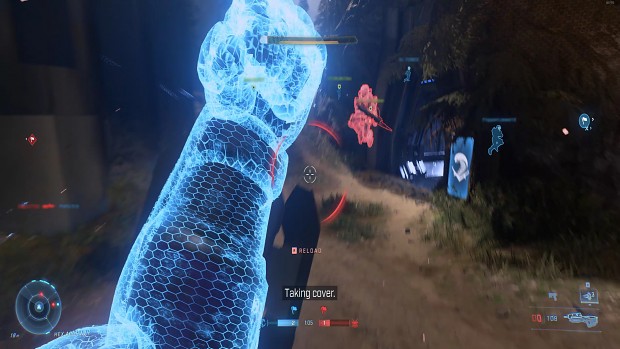 It’s no certainty if I’ll be in the next flight, but if I’m not, this one convinced me that at least the multiplayer will be a brilliant offering of Infinite’s. I feel given the trailers seen so far, the campaign could benefit from the same stress testing, as lots of remarkably helpful feedback has seen implementation during the multiplayer flights already. The campaign, however, remains an unknown quantity.

In any case, we’ll possibly see one more testing period before Infinite’s projected release in about a month - a last-minute round-up of any other bugs that can be solved. Infinite’s repeated delays so far could also mean another one is on the horizon, if the rest of Infinite’s flighting so far indicates further improvements are needed. For the most part, however, I’m positive about the new release - and we’ll be sure to cover any more news about Infinite closer to the finish line.