Added SFX and VFX to the Bow and Arrow, then spent the rest of the day making a video to serve the algorithm:

Sorted out the tweaks I wanted to make to the spiders. They now only attack the player within a given radius, and they’ll reset back into the tree if the player walks too far away from them. I tried to stop spiders bunching up when multiple attack the player, but because of the EQS scoring, there’s not a lot I can do. Opted to have them pick a random location from the entire valid list, rather than the best 25% in the hope they’ll spread out more often.

Really dug into the nitty gritty of the bow/arrow and ztarget stuff, trying to smooth out as many edges as I could find. Fixed lots of instances where the player could get stuck, or the smoke and mirrors arrows that I spawn could be left in the world and made super-duper sure that any object the player kills, that they’re targeting, correctly pops them back to a relaxed state.

Also rationalised all the damage values, damage classes, and types that are passed about. Not final numbers, but better. The bow’s now killing things from afar.

Even better, you can now kill anything in the game with the fishing lure… Although, it’s ten times weaker than an arrow, so no bugger will ever find that out… Hidden achievement? :D

Made a new build and found some cracking bugs.

Mostly focused on the vines, today. They need collision to block the player (and eventually do damage to them) but adding this to the mesh wrapped around the spline causes a perf hit when the vines are updated, so instead, I fake it with box colliders. The box colliders need to be removed when the vine’s retracted a certain amount, which can be different for each vine…

Of course, one collision box isn’t enough, so there’re variants…

Placed a few more vines in the map, as well as some more spiders. Also fixed arrow spamming and an edge case that was blocking the removal of the ZTarget indicator in the UI. 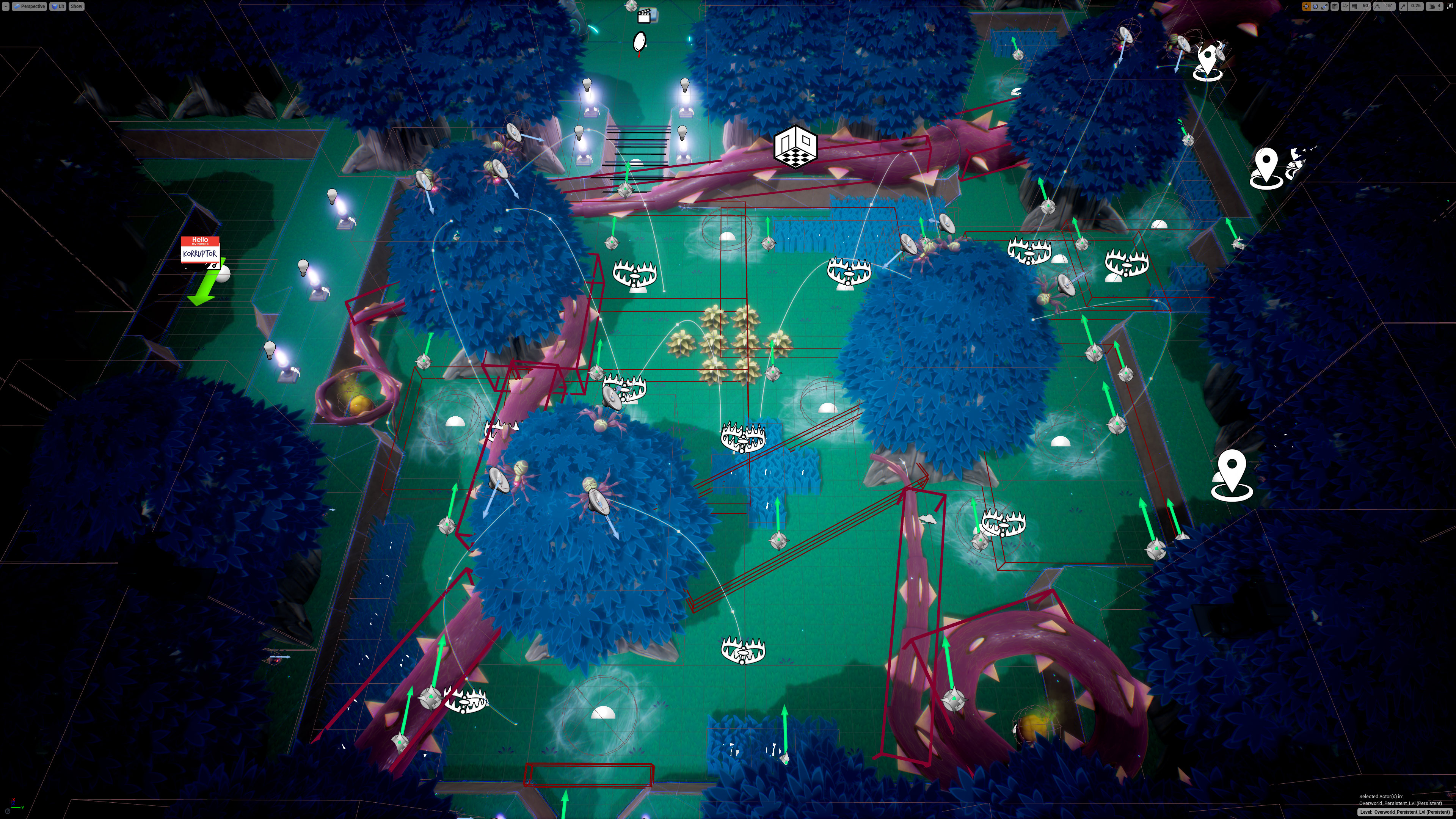 Finished off the spider / vine placement and made a sticky floor thingy. Just some permanent webs on the ground that debuff the player…

Debuffing the player is becoming a thing, so I’ve gone in and done it properly. Rather than a flag and messy state checks, I now reference count the debuffs applied and removed from the player and use these counts to return the current debuff state. I don’t have any debuffs that stack atm, but as and when that happens, I can support it…

Final movement speed for the player and camera is set once, after encumbered/movement state changes, using the currently calculated debuff as a modifier. It’s cleaner, basically. Probably how I should have done it in the first place…

The final set of vines is spread out a little, so I’ve started adding little sequences to take over the camera and show the player when they retract. Took me far longer than I’d care to admit to figure out how to restore the viewport (back to the follow cam) after the sequence has played… but I got there in the end. :/

Finished all the Level Sequences for the end bit of Ytene. Took me a while to work out why audio was broken, but of course, camera cuts do nothing to the listener, so I have to manually move that to the next location. Made a little camera class for level sequences that’ll have the correct settings for ultra-widescreen, and a function to grab the listener…

Also added audio and VFX to the player’s footfalls when debuffed by webs. Little thing, but it sells it a bit better.

I’m not quite done with Ytene, but I’m close. I added some additional dialog lines to Miss Tee – real person btw, like most NPCs in this game – so she can give you some clues if/when you get warped by the fog, as well as just a general “hello” if you meet her in passing. 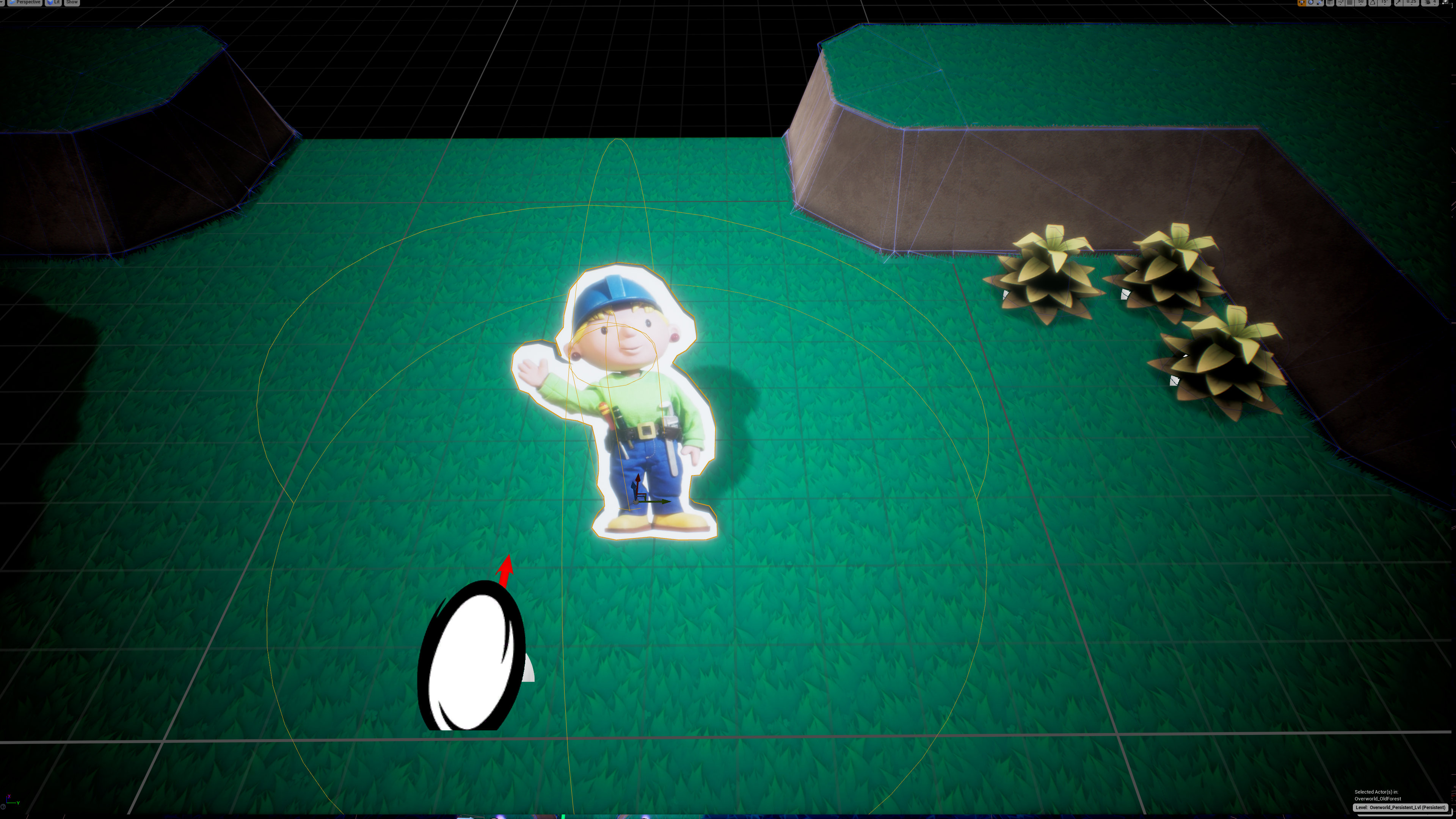 I think, long term, I’ll add a few more bits to Ytene, maybe a spider variant, and some smaller vines you can chop with the sword, but for now this is “done”. For now.

I’ll try and make another vid next week…