A quick summary of the revamped Age system from the vanilla game, followed by a review of the year of 2016.

...are concepts developed to classify and identify the technological development of a planet and its hosted civilizations. Historically, in the Star Wars universe, there have been 7 tech levels which governments have used to classify other planets.

In Age of Empires III: Galactic Conflict, however, tech levels will be level of technological, military and economic advancement of a player and its factions. The way players progress throughout the Tech Levels is different for every faction. Each new Tech Level will also allow for the creation of new units and buildings, the research of new techs and the sending of new Shipments. There are 5 Tech Levels, players begin each game in earliest tech level, by default: Tech Level I. 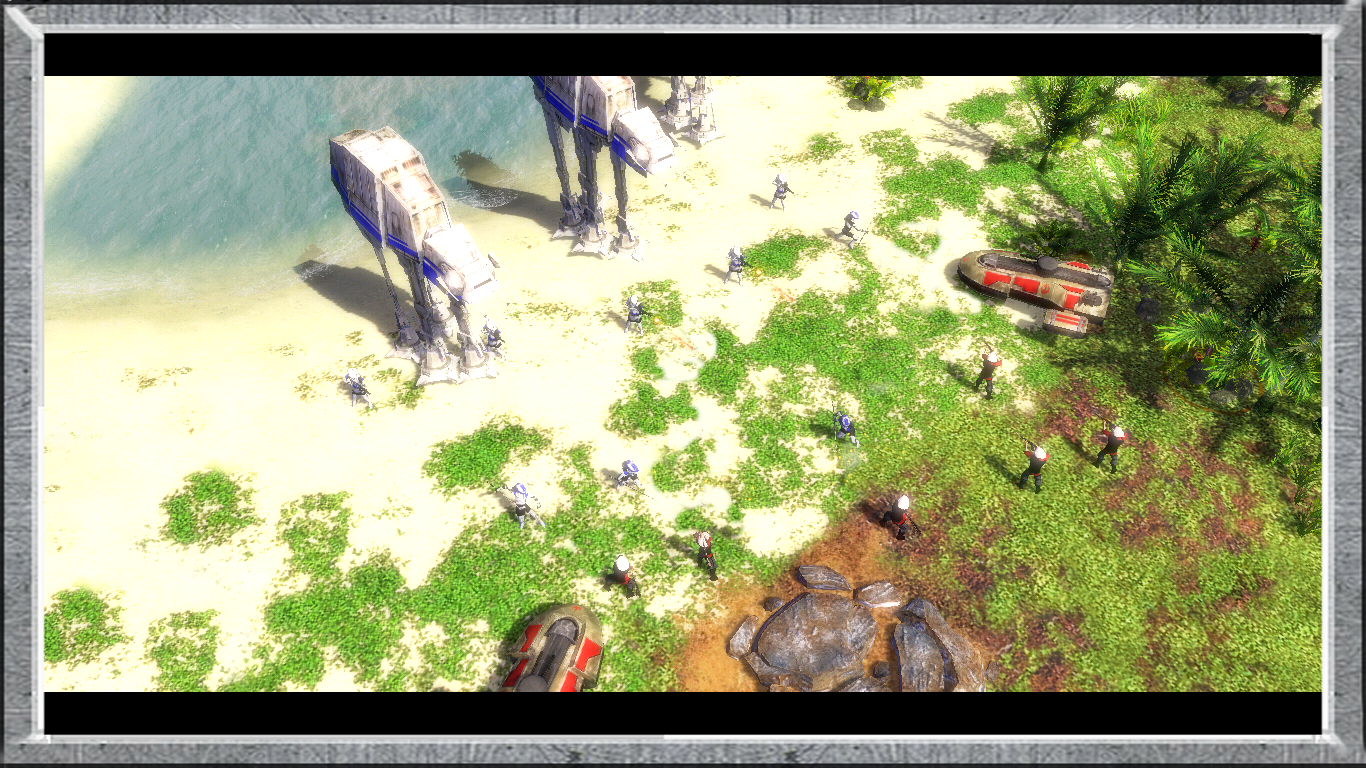 The earliest tech level available. In this level, your base is at the bare minimum. Few buildings are allowed for you to build, and the unit roaster in this age is even smaller. Your main focus on this age should be to gather enough resources in order to advance to the next tech level, however it is also wise to develop your base, at least to a minimum.
In this tech level, bases are on the humble beginnings. Expect to see the birth of resource-extraction, exploration and the foundation of bases. Military units are mostly restricted to early melee units, such as the B1 Grapple Droid (Confederacy), or the Riot Stormtrooper (Galactic Empire). 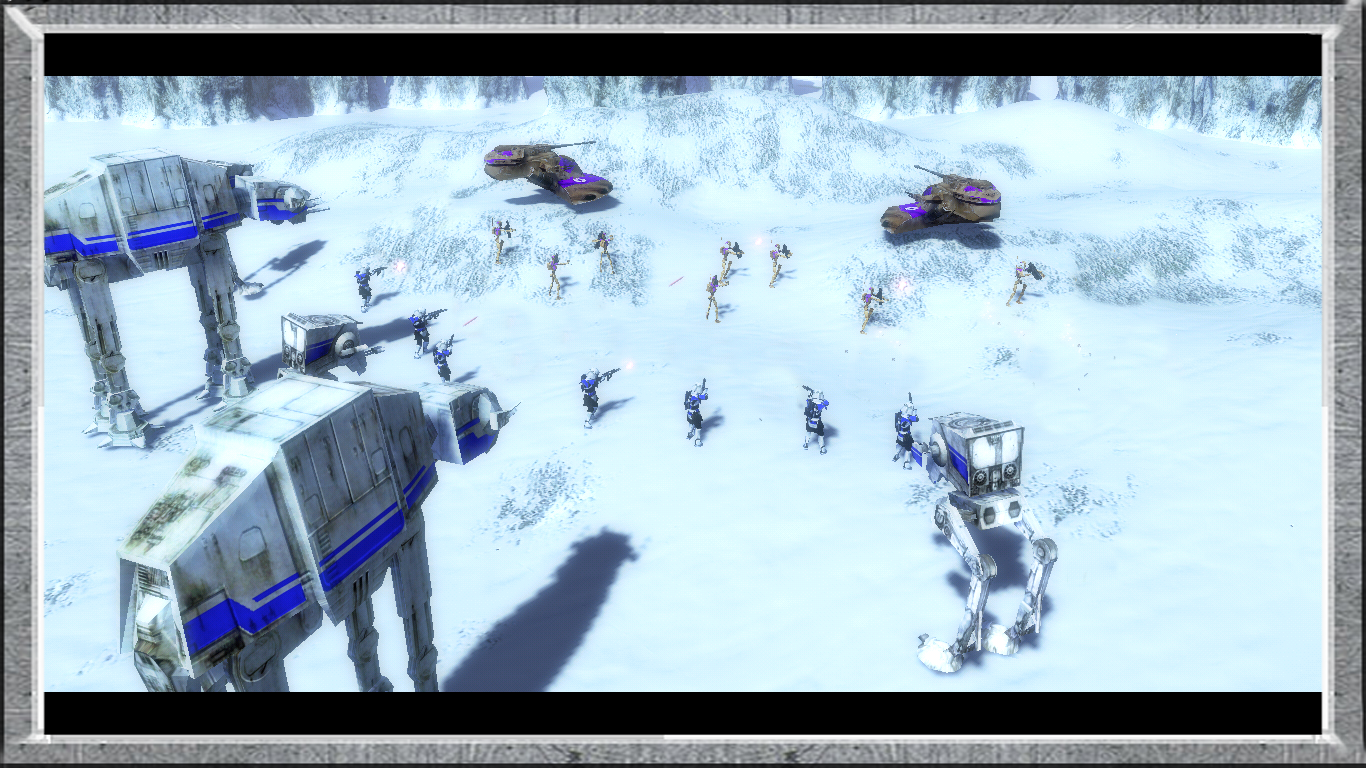 Imperial Forces put the Separatist Droid Army on the run.

The second tech level. You are far enough to begin training your army - don't expect it to be a big army however, at this level your army is only good enough to perform small skirmishes, or to battle small, hostile raiding parties on your base. Your focus on this age ought to be the development of your base and the foundation of your army.
At Tech Level II, you have yourself a small base with a big potential. Most of trooper-class infantry are enabled to all factions, and speeder bikes become enabled at the Light Vehicle Factory. However, other than that, not much changes. Defensive structures such as walls and turrets also become available at this age. 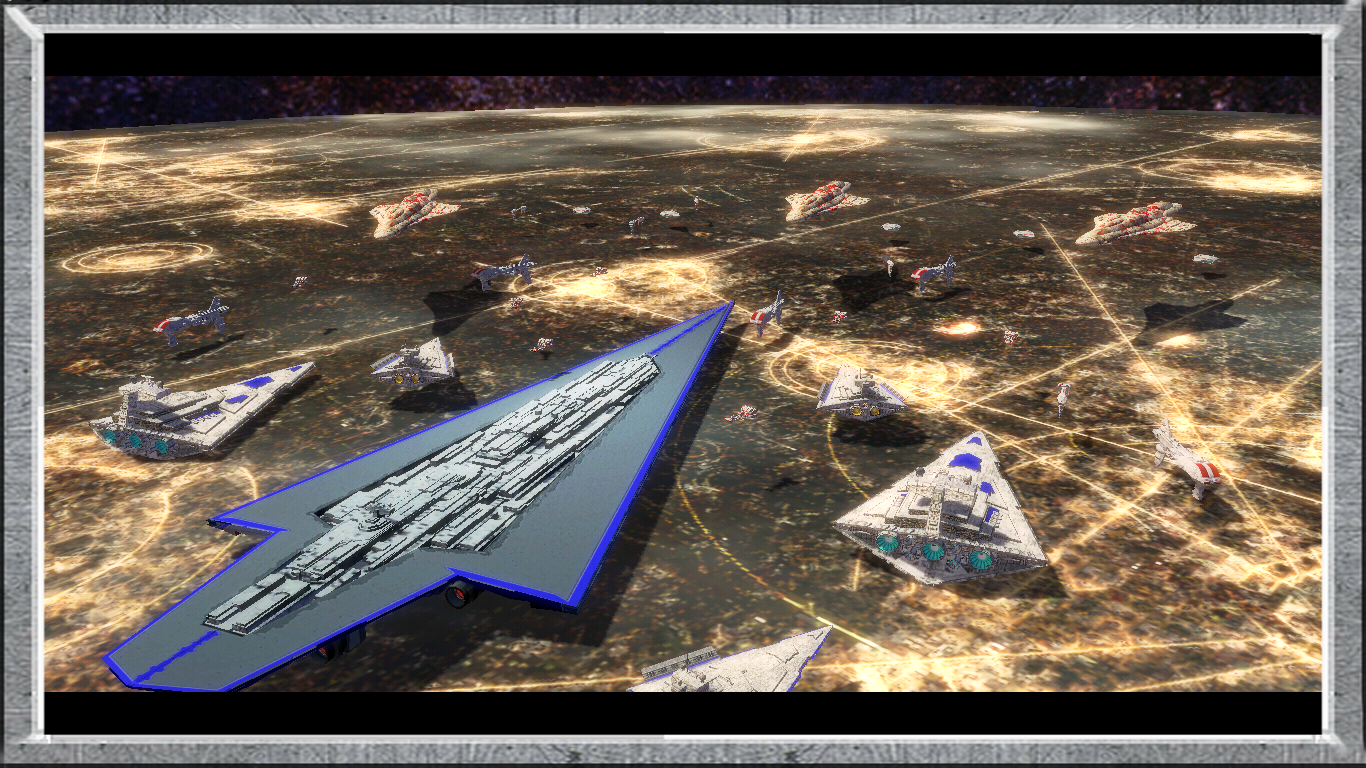 New Republic Fleet battles the Imperial Fleet above the skies of Coruscant.

At this point, your base is halfway through to become a respected power in the game. Apart from the obvious, new available military unit roaster, this also becomes the level where you are allowed to upgrade units for the first time. While on the previous levels your main focus is to grow, your attention should begin to shift to combat. Medium sized battles are spotted across the battlefield, and your economy should begin to boom at this point.
Tech Level III witnesses the development of warfare. You should be allowed to train your entire infantry unit roaster, and Strike Mechs and Counter Mechs should be available. Fighters and Bombers should be possible at your airbase, as well as Transports. The Fortress is available to most factions at this point, and some early Heavy Weapons may even be spotted on the battlefield. 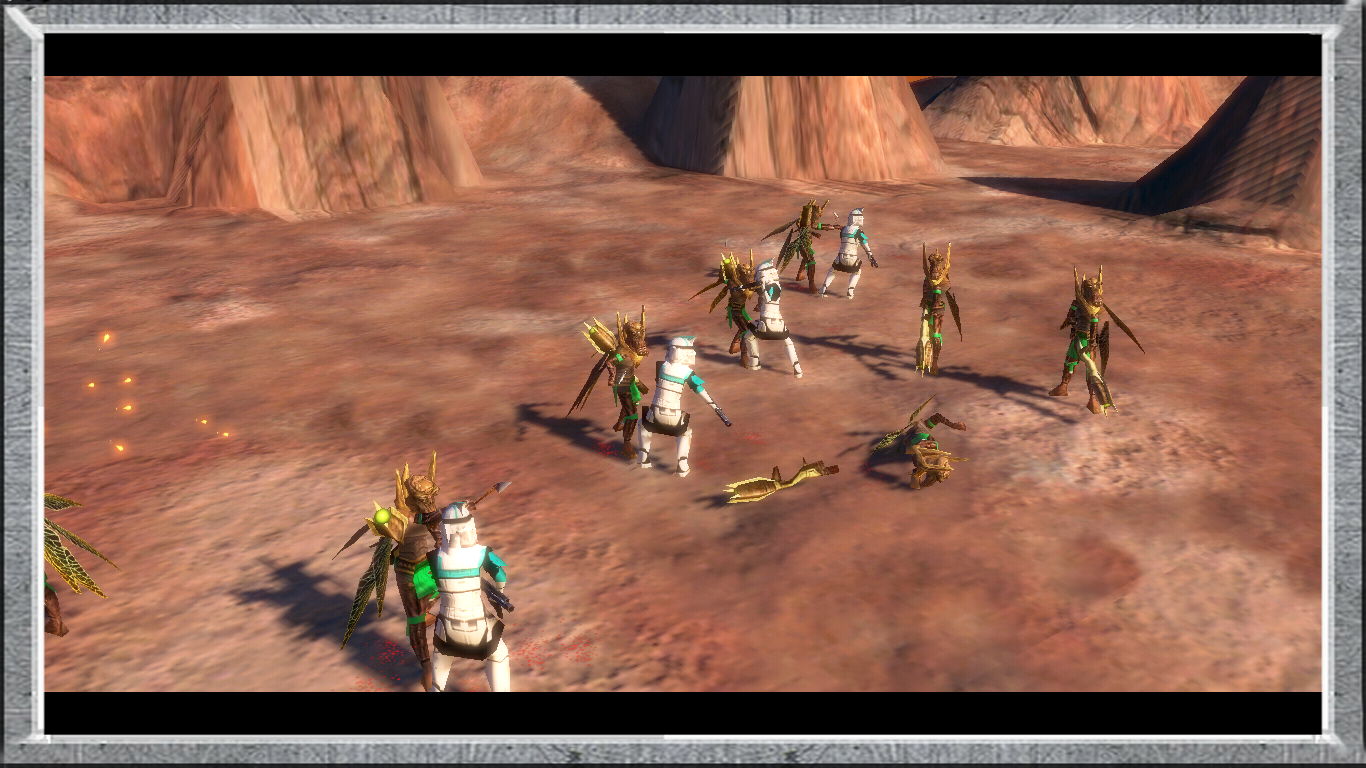 Geonosians and Clones fight hand to hand on the red deserts of Geonosis.

Your allies see you as a powerful friend, and your foes think of you as a major threat. At tech level 4, most of your entire unit roaster should be available. This age is all about supremacy, battles begin to be described as “big”, and if your enemies are at the same tech level, you will wish you’ve prepared your base’s defenses. Supremacy does not always come in brute strength, however – most of the “big” technologies are allowed to research at this age, and are improvements that can make the difference between the victor and the defeated. Your economy begins to be industrialized, by factories sent from your home planet.
At Tech Level 4 all units should be available - the remaining Mech roaster ought to be available, as well as the Heavy Weapons. Interceptors, Gunships and Heavy Fighters are allowed at your airbase. Upgrades and Improvements become your allies. Although, in order to maintain your status as military power, your economy should be even bigger.

The final tech level available. You’ve done it, you’ve earned the title as a respected military power. If both you and your enemy are at this level, total war are the words that describe best your conflict. The final upgrades are allowed, you’ve reached your full potential. Your economy better be stable, otherwise you will crumble thanks to your own greatness. Battles are as big as they can get. Only thing you are left to do, is to destroy your enemies, once and for all.
At Tech Level 5, all upgrades and improvements become available. If two hostile factions are both at this level, expect a long war and a tactical stalemate, strategy will define the winner.

A Year in Review

This day we also say farewell to 2016, and as such, a review should be required. 2016 was not my most productive year, and although I wanted to release an open alpha by mid-December of 2016, the project was delayed. This delay and decrease on productivity relates mostly to my personal life, particulary my life as an college student. Nevertheless, the mod did grow, just not like it did the year of it's birth. Sometimes I wish I was able to post more, and let the fanbase be aware of what's happening, and I assume that I could be better in the "marketing" department of the mod, maybe I'll even add it to my resolution list to 2017, who knows...

As I said earlier, an open alpha was set to be released around Christmas time, but was delayed by extra-work load from university. The most logical thing to happen is the open-alpha, containing the Galactic Empire as a full playable faction, to be released, but again, I may rethink of it, so I will make no promises.

To close this review, I would like to pay a tribute to those who lost their lives this year, and that on their own way made Star Wars the greatest franchise in the history of cinema. 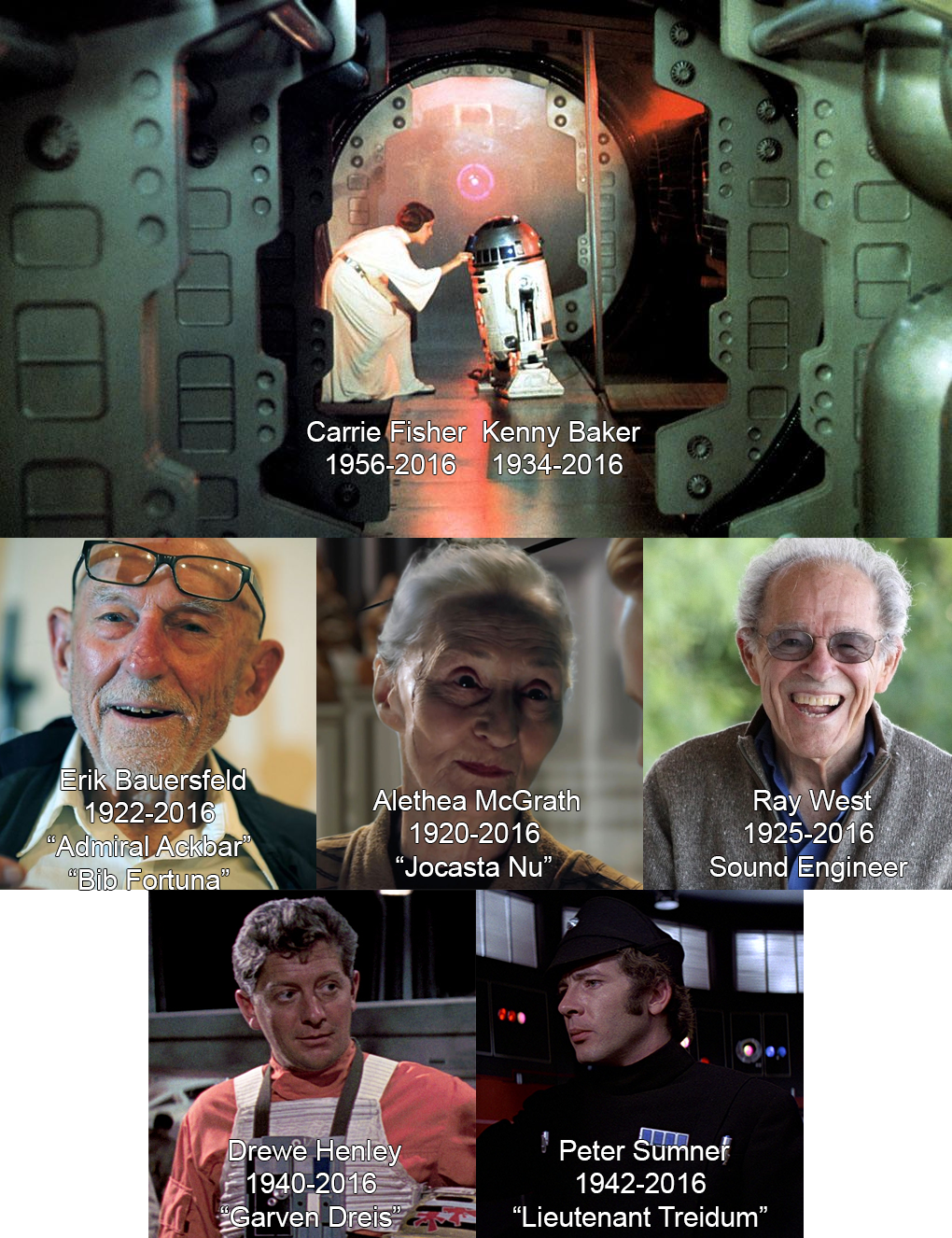 Looking good so far and RIP for all those great people

I'm so happy it's not dead!

its not? Nothing has happened here for months

Wow this mod sound like sooooo cool. When does the mod will be downloadable ;) ?