This tutorial is about one on one of the staples of arcade action flight simulation games- that is, the Bomber Intercept mission.

Disclaimer: this post has entirely made by Hat, I´m just posting in his behalf.

With release coming up very soon I know a lot of you guys are itching to make your own campaigns and missions. That’s why me and Wheaton will be running through each of the basic mission types for you to learn and adapt from. The mission editor isn’t 100% complete as you’ll see in this tutorial, but it does its job well reasonably enough and it works well enough for me, so I’m sure that you’ll be fine once you get the hang of it.

Now, this tutorial will be one on one of the staples of arcade action flight simulation games- that is, the Bomber Intercept mission. This mission type has graced games we know and love since their creation and serves as a nice, simple introduction to the player (and now, to mission-making using VT Editor).

First, we’ll load up the Editor option from the Main Menu. It’ll start off looking like this. 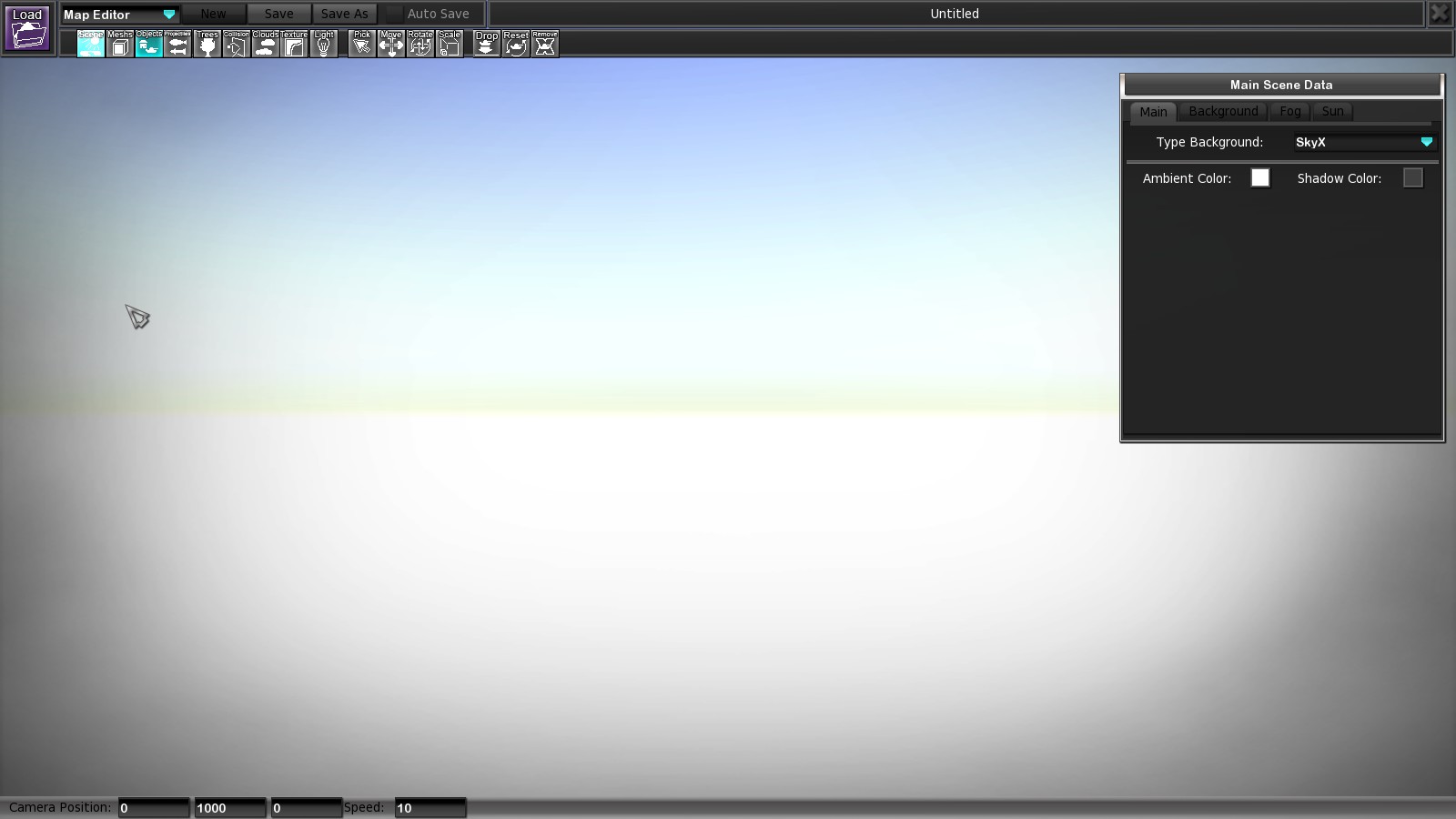 The white landscape is because we haven’t loaded a map to use. On the top left corner there’s a giant purple Load button. Clicking on this will bring up a list of maps for us to play with.

First we’ll spend some time screwing with the fog and time settings to make the map look pretty. (This is how I managed to get those cool shots right when the Steam build first released.) 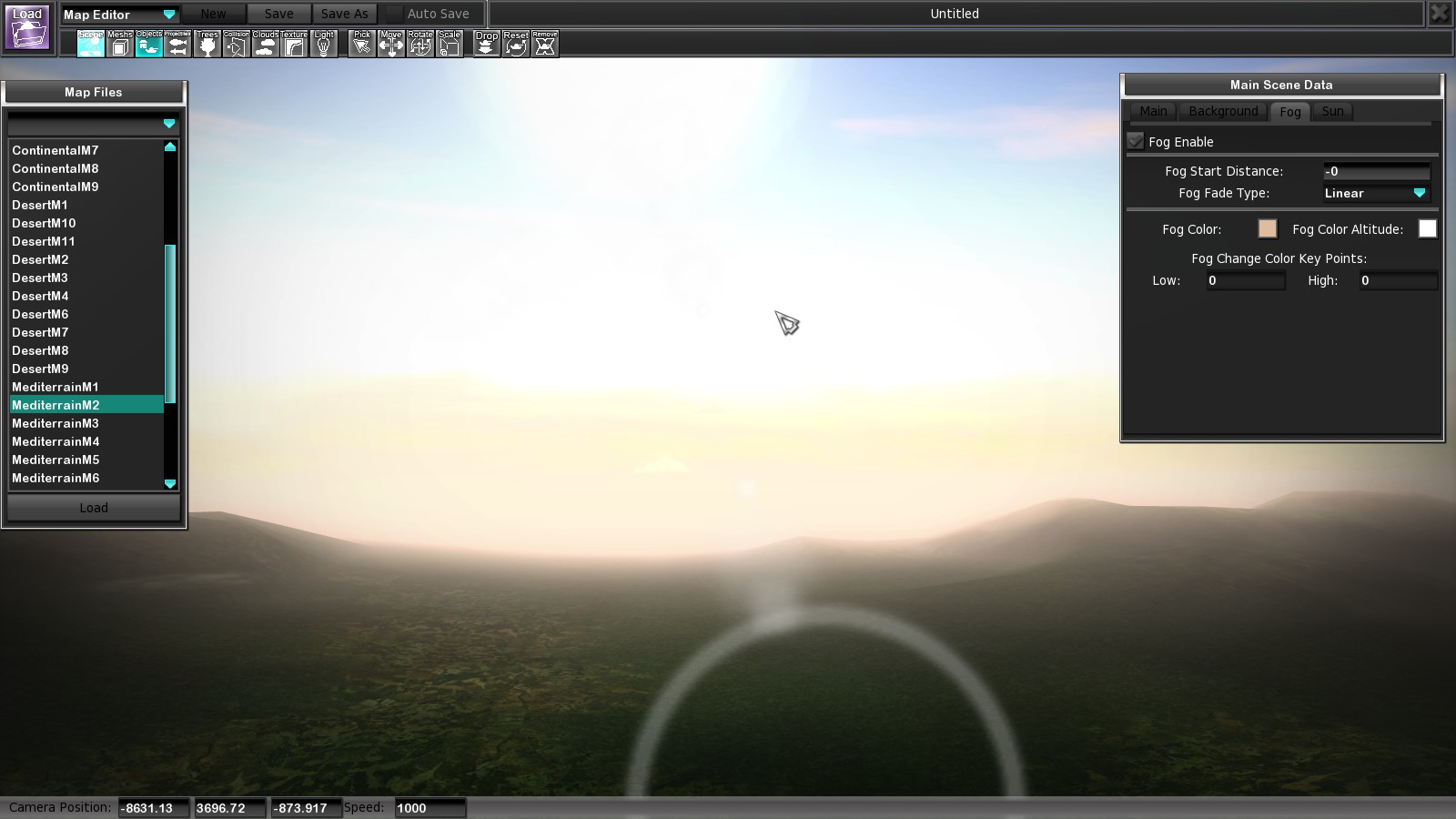 After you’re satisfied with how the map looks, it’s time to work on the actual contents of the mission. Select the Mission Editor from the editor tab next to the Load icon and bring up the Config menu on the left hand side of the toolbar. 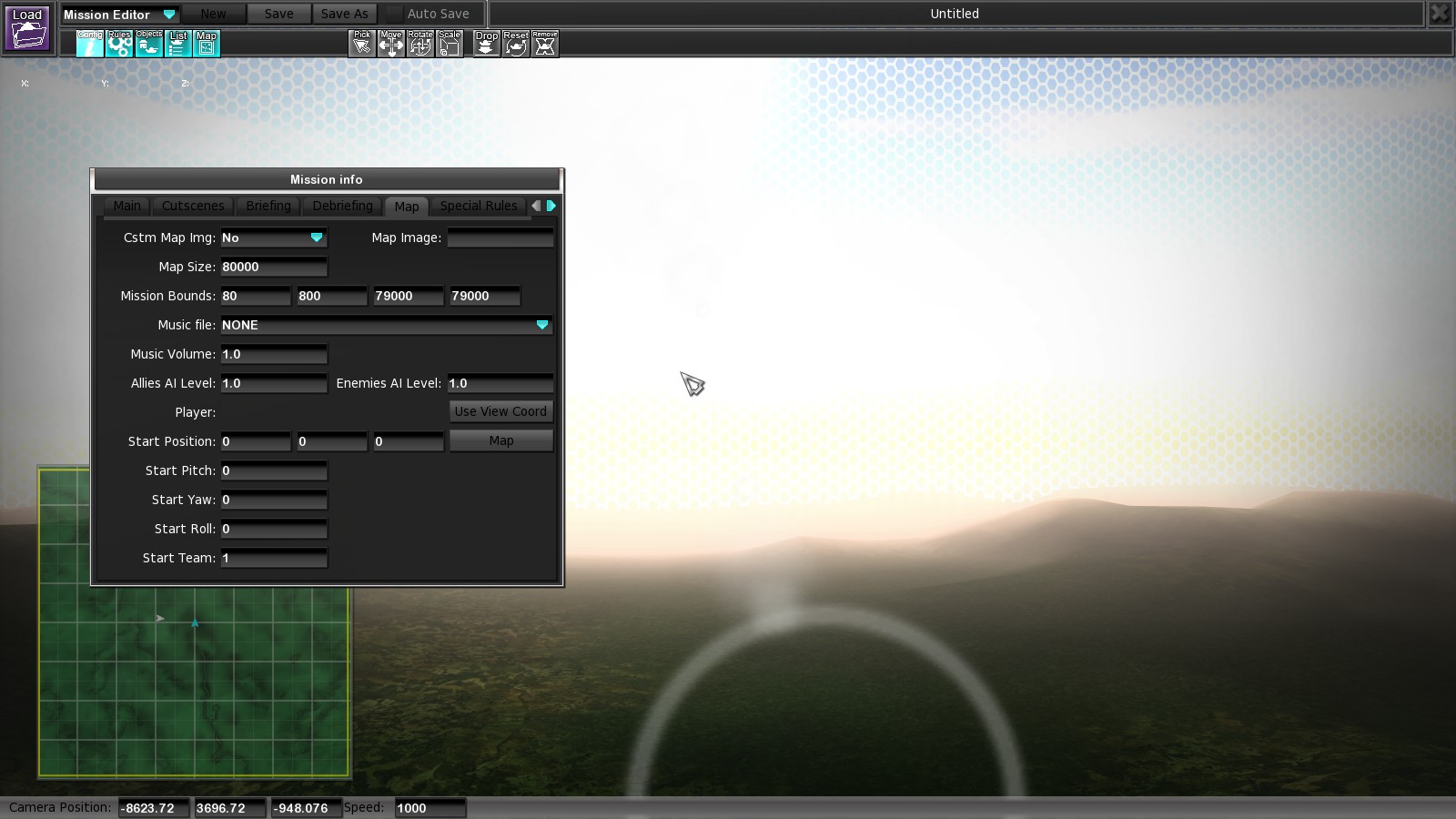 Now there are a great many things to be done in Config that mainly relates to what happens during the briefing and whatnot but what we’re concerned with is the Map tab. This defines the basic environment of the play area and includes map boundaries, music. etc. The music is fairly simple and opens the VT music folder to select a piece for you to play during the mission.

The Map Bounds is slightly more complicated. I think each value determines how far away from each side of the map the operation bounds are, but I’m not too sure. Enter random numbers (some letters work too for some reason) into each bar until you get a shape which you like, or copy my example which works best when you’re lazy like me, who will probably recycle the same values for every single mission that I create.

Next, we’re going to set up some allied aircraft to help us fight off the bombers. We do this by selecting the Objects window, which opens a Create tab for us. Use the mouse to position the aircraft on the X/Y plane first, and then select a Z value by moving the mouse. Now there is a flaw here with trying to get a 3D position properly using only a 2-D medium (your table), so more often than not your aircraft will end up miles away from where you actually wanted them.

Not to worry- simply go to the List button (next to Objects) and select the unit you have just spawned. Then, go back to the Objects menu and select the Edit tab, which will now be populated with unit information including their coordinates. Simply move your camera to the place you wanted the unit to be and then copy the camera coordinates (bottom left) into the unit coordinates.

An important thing to note when playing around with spawning units and such is to remember to select the ‘Rotate’ or ‘Move’ cursor when trying to click on units rather than the logical ‘Pick’ cursor, because this is used to spawn units and trying to click on a tiny box will have you create hundreds of planes below or inside the ground and crash your game. Alternatively you can just select the unit from the List button. 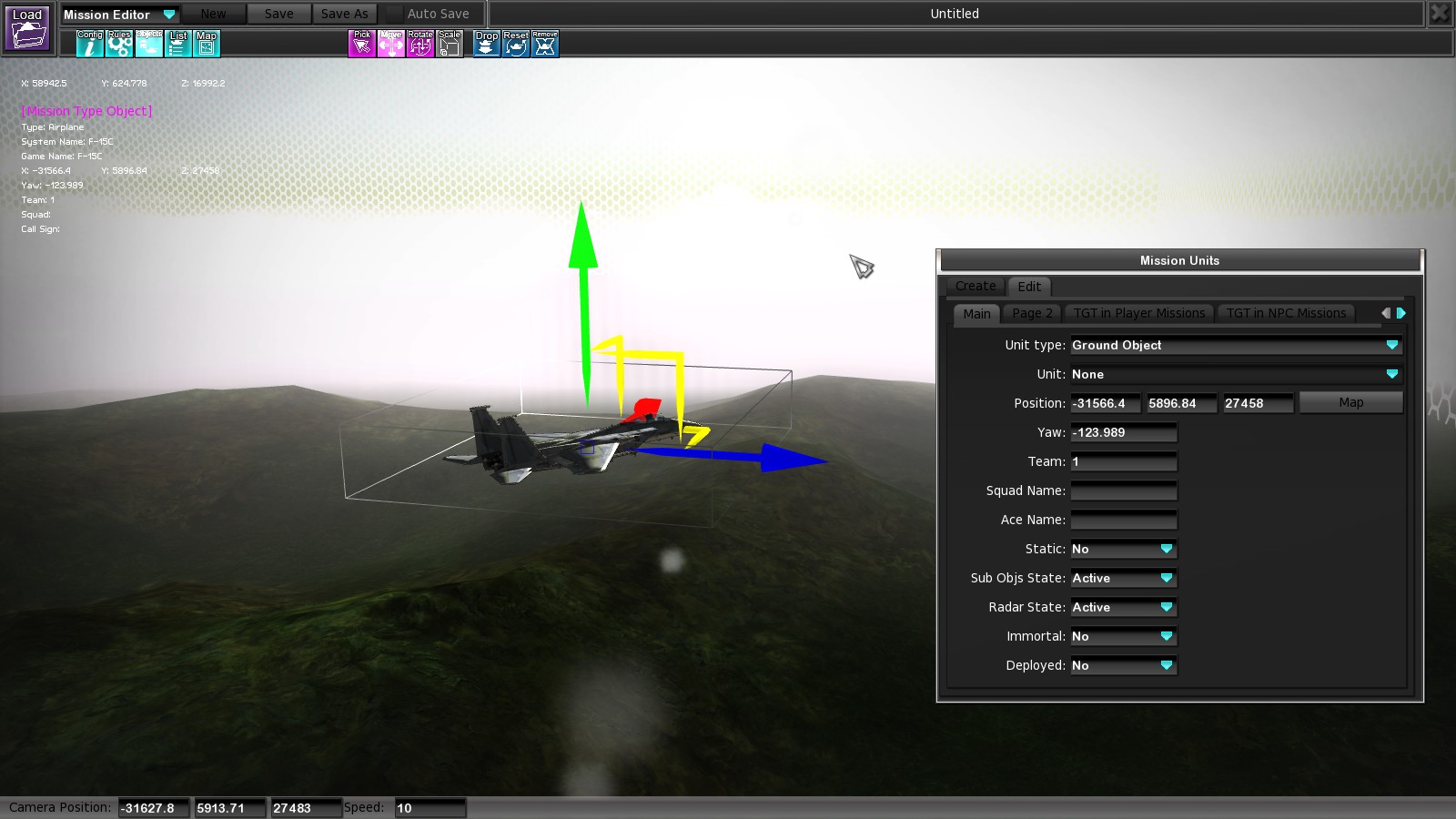 After you’re satisfied with your unit’s position set their Team to 1 (allied)- as far as I know you can ignore the Ground Objects tab at the top but if you want to feel safe you can set it to an Aircraft type. On Page 2 you’ll find their AI type, which you need to change so that it is not ‘None’, otherwise they will fly in straight lines and be unhelpful. You can repeat the spawning and editing process as many times as you need to create however many allied aircraft you want. I’m going to make two. 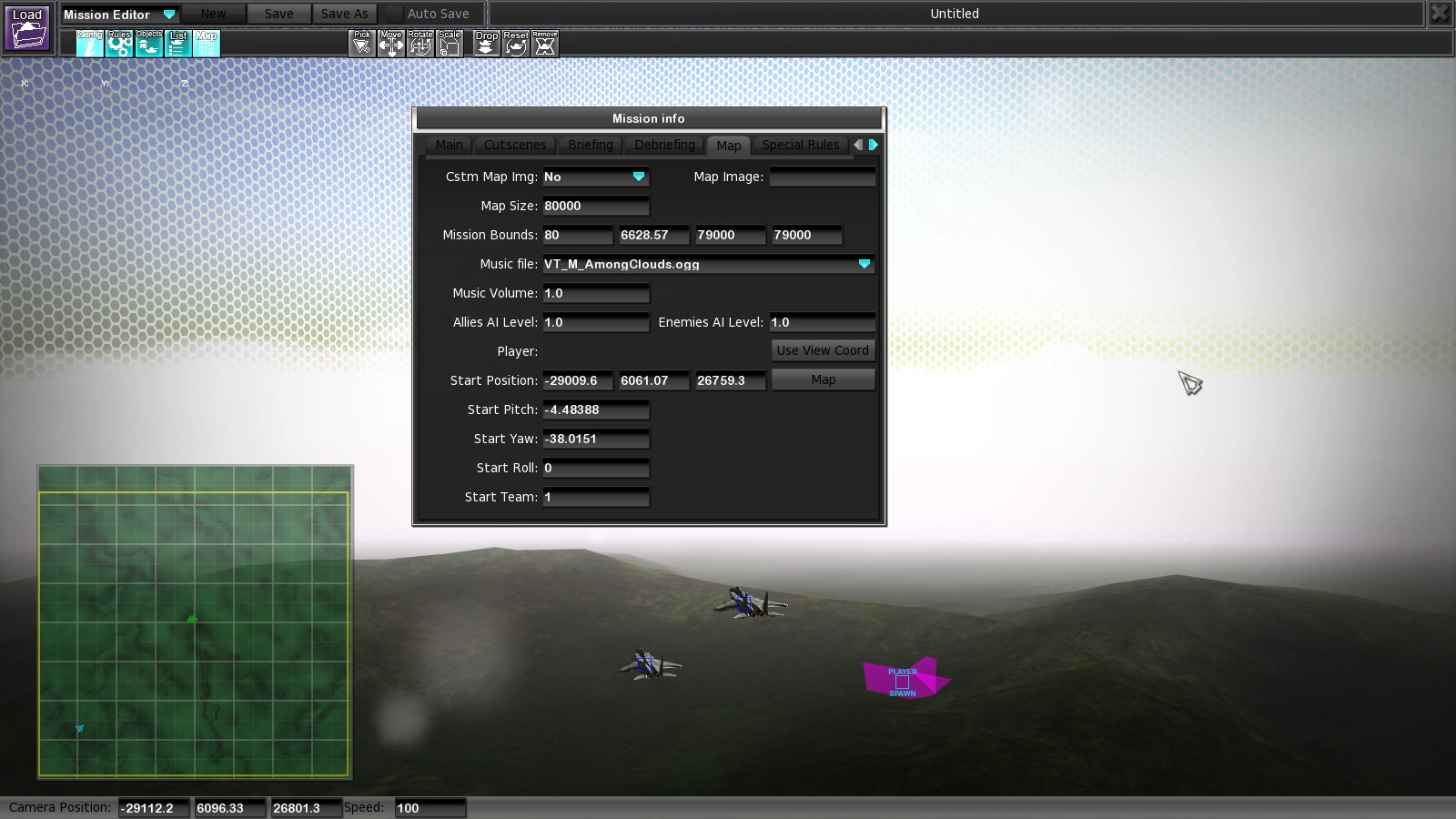 With the friendly units and the player out of the way we can move onto spawning the bombers. Repeat the process for spawning your allied units, except this time spawn bombers and set their Team to 2 (enemy). 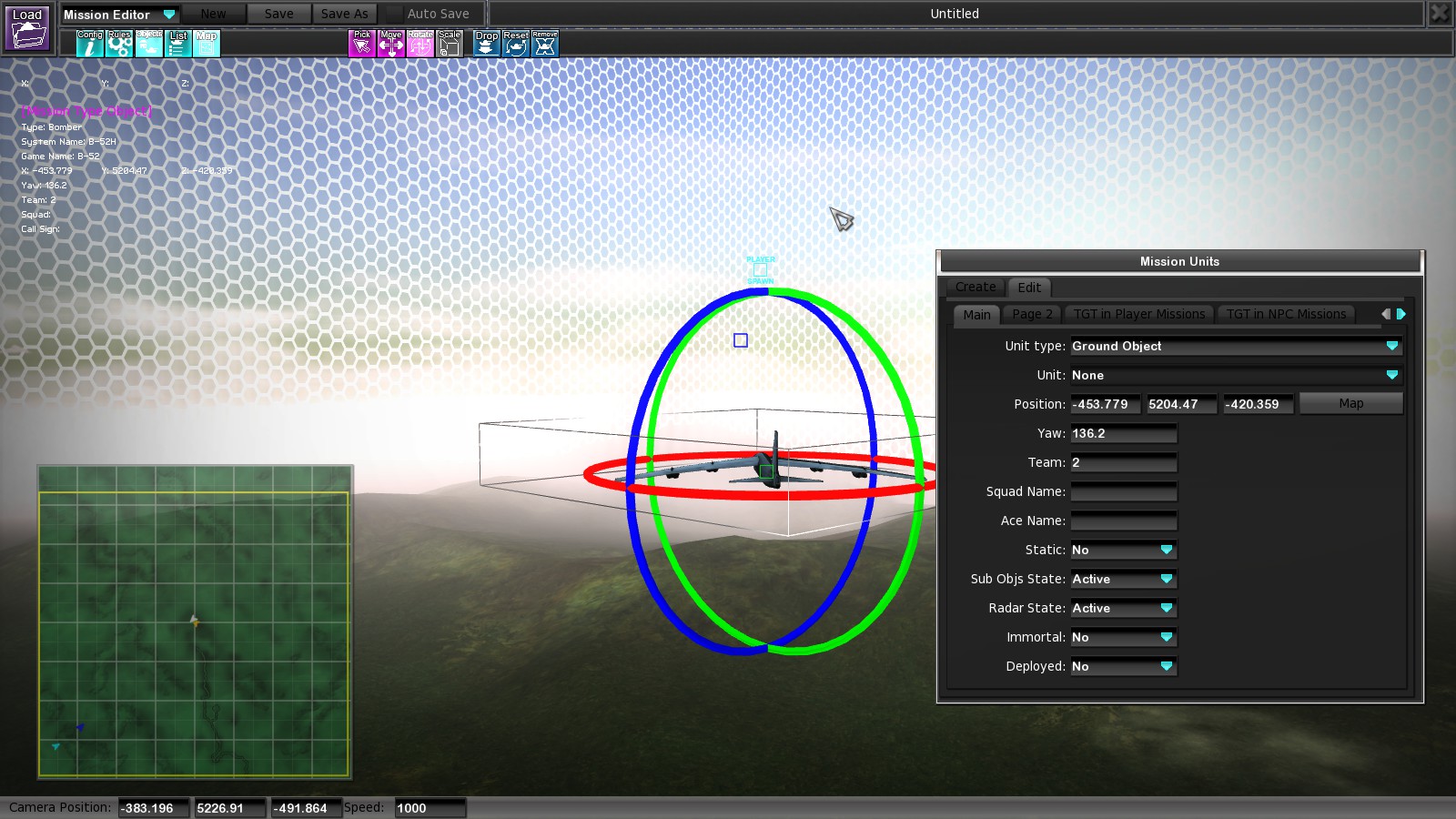 Now, we also want to make these bombers TGTs (they’re just normal targets for now) so we go to the ‘TGT in Player Mission’ tab and select ‘Main’ for the main mission. 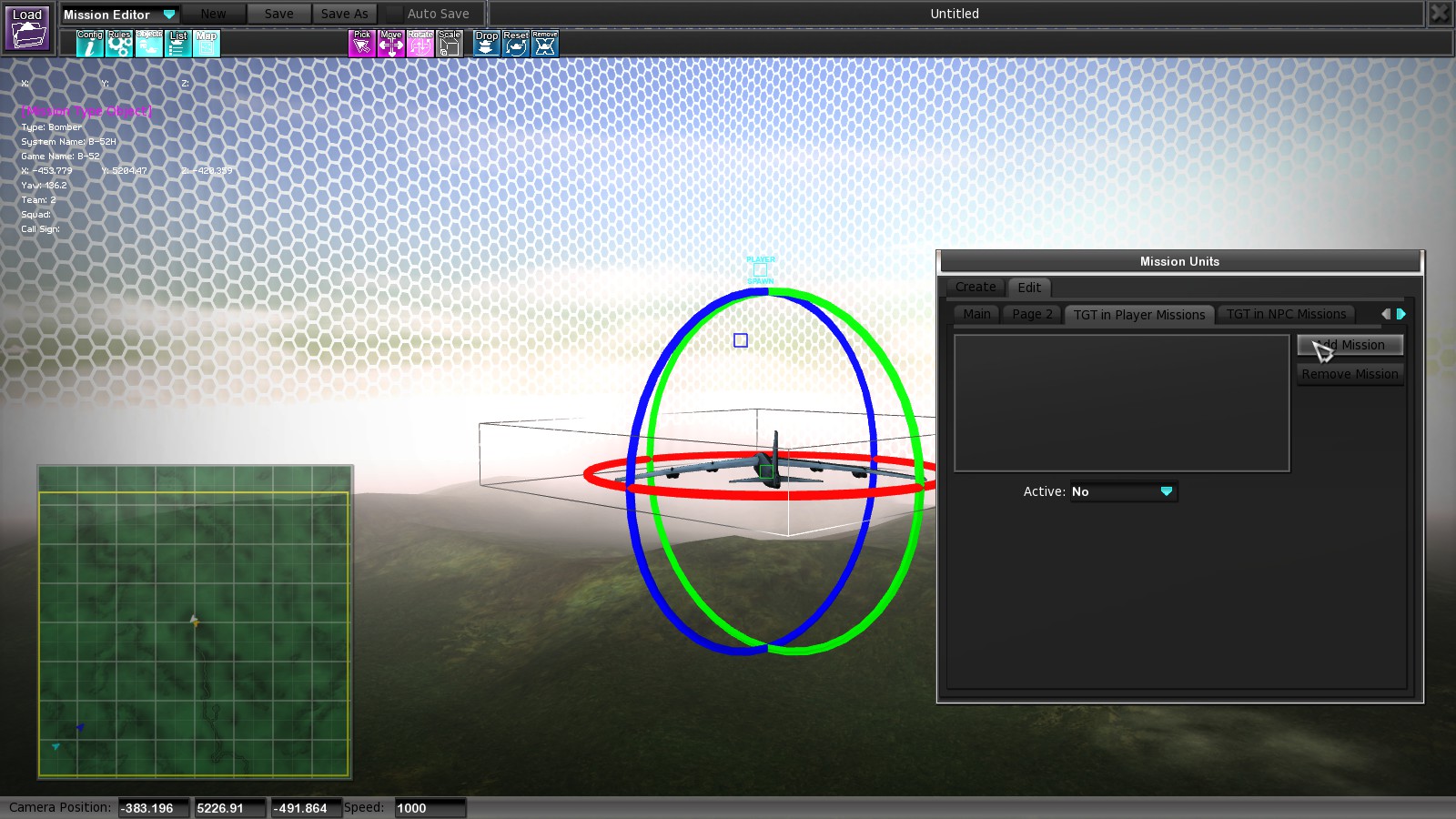 Again, you can do this process as many times as you need to spawn as many bombers and escorts as you want. Remember to set the bombers to TGTs and leave the escorts as optional targets. Because I’m lazy, I only did two bombers and one escort. 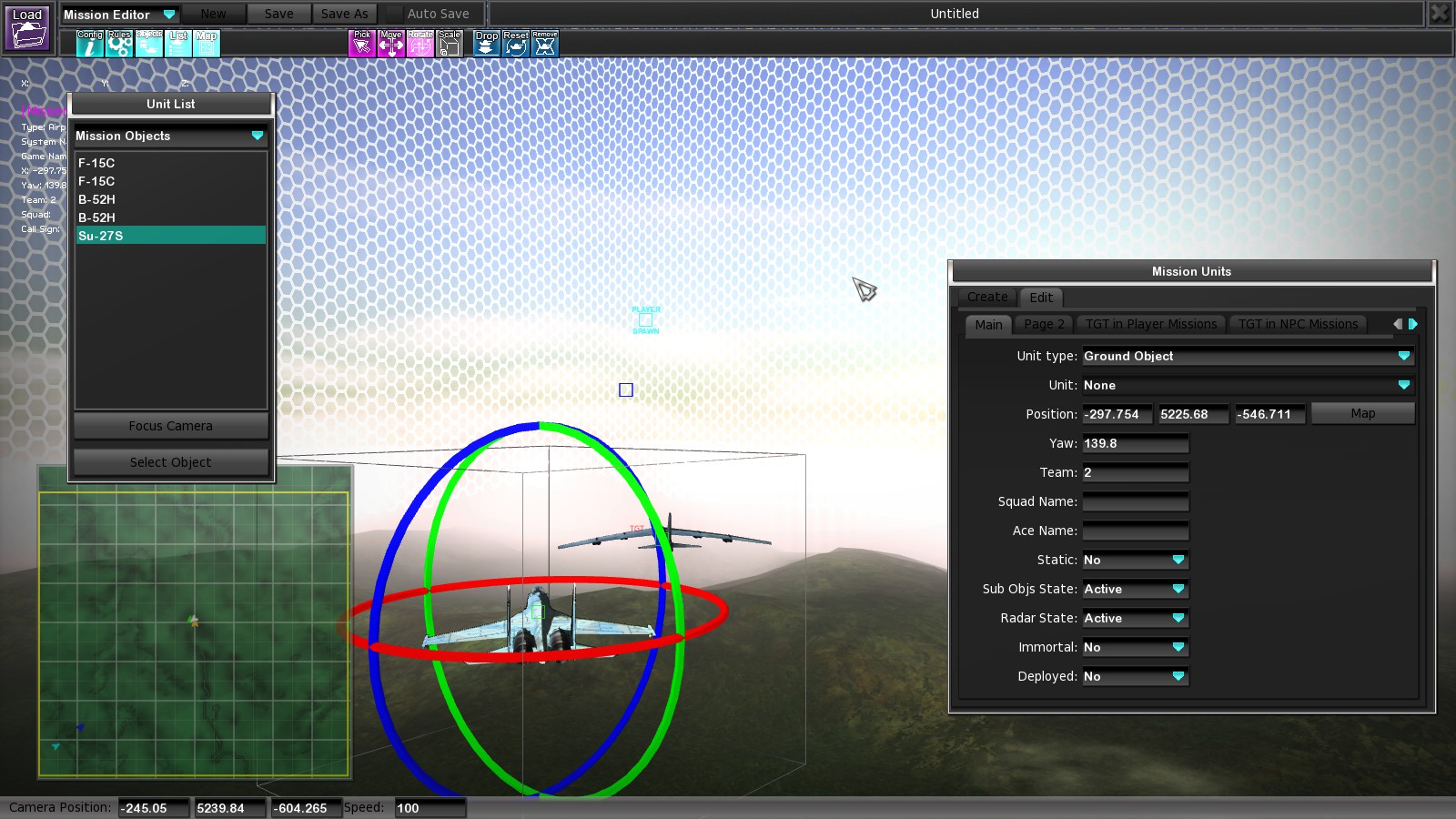 So now, we’ve gotten our bombers, an escort, and our allied aircraft on the map. The next step is to give their AIs something to do (in particular the bombers). Go to the Rules button to open up ‘Gamplay Rules’ (TS please fix). You want the NPC Missions tab, and create a new Mission. 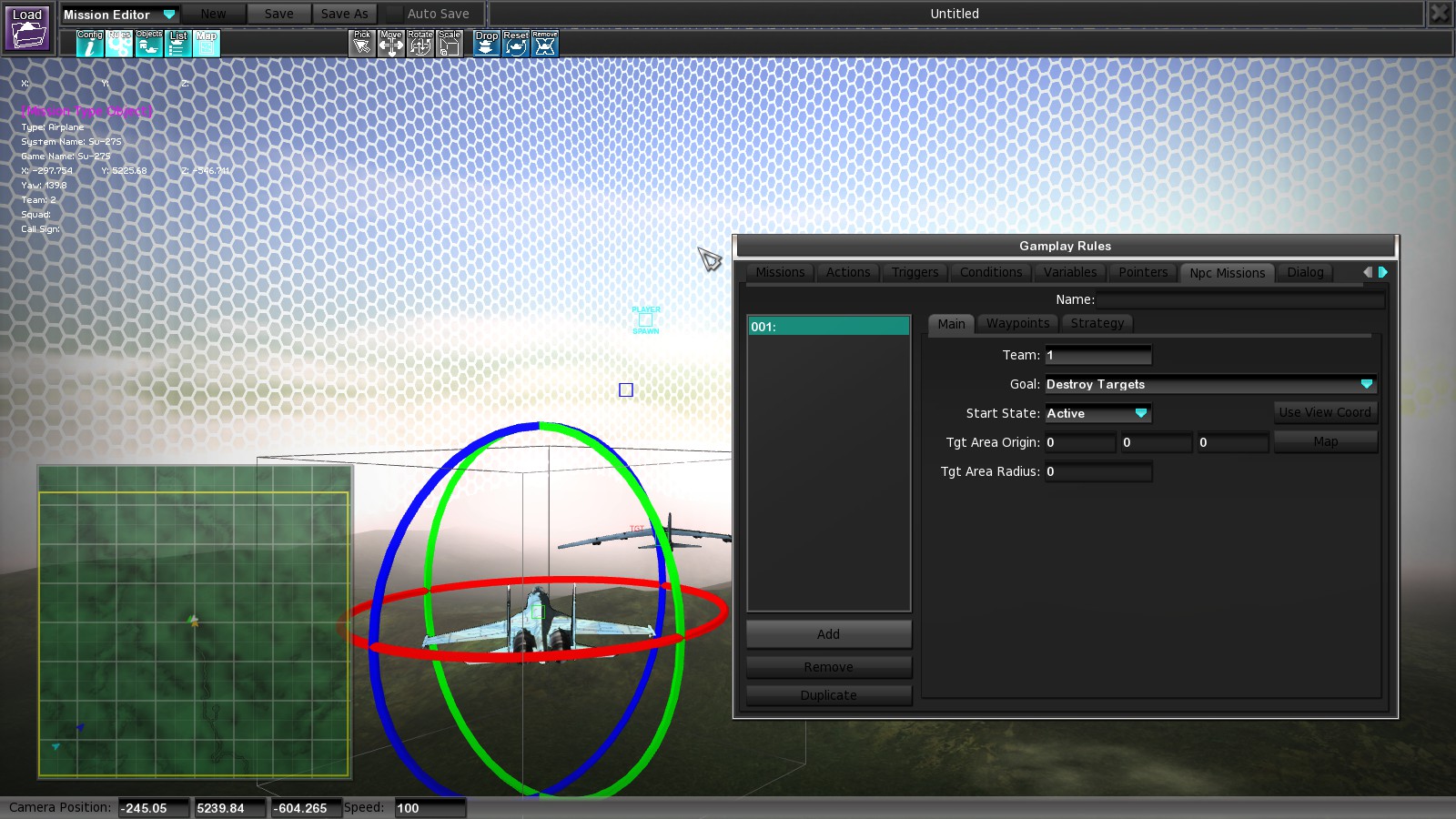 Type ‘1’ in the Team field to indicate that this mission is for Team 1 and select ‘Destroy targets’ as the goal. Make sure the mission is active at the start. You’ll need to allocate the mission to our F-15s by going to their Edit tab and selecting the NPC Mission in Page 2. Easy. Now, we’ll make the bombers run for the map edge to bomb our last airbase and cost us the war effort. 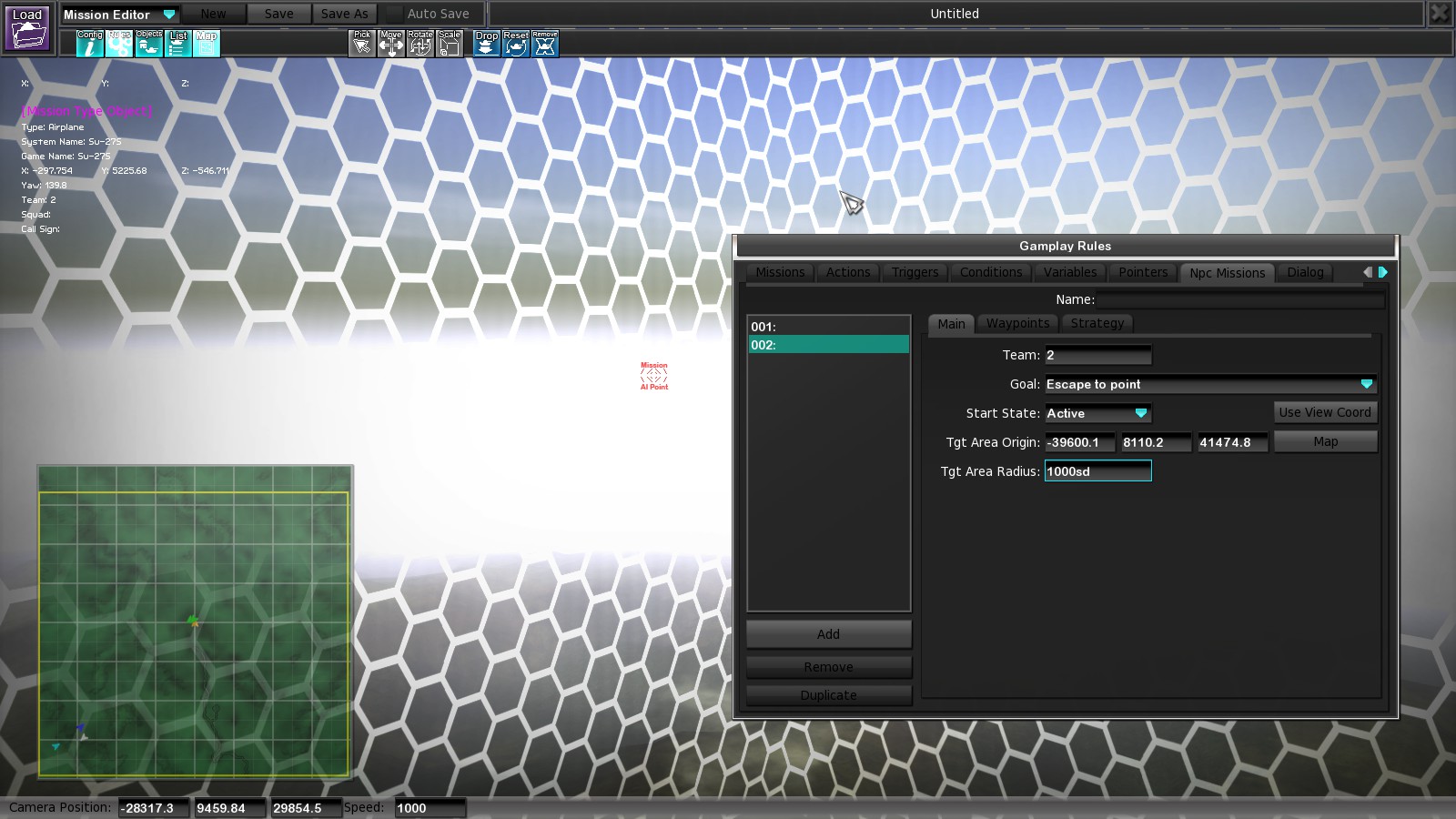 Move the camera to a point outside of the map and press ‘Use View Coords’ to set your position as the bomber’s objective point. Select a reasonable radius from the point so the bombers don’t look stupid flying into each other trying to get to a 1x1x1 cube.

Finally, we’ll tell the game how the player wins the mission (or fails it). Go to the Rules button and create two new Level State Actions- one for Clear, and one for Fail. 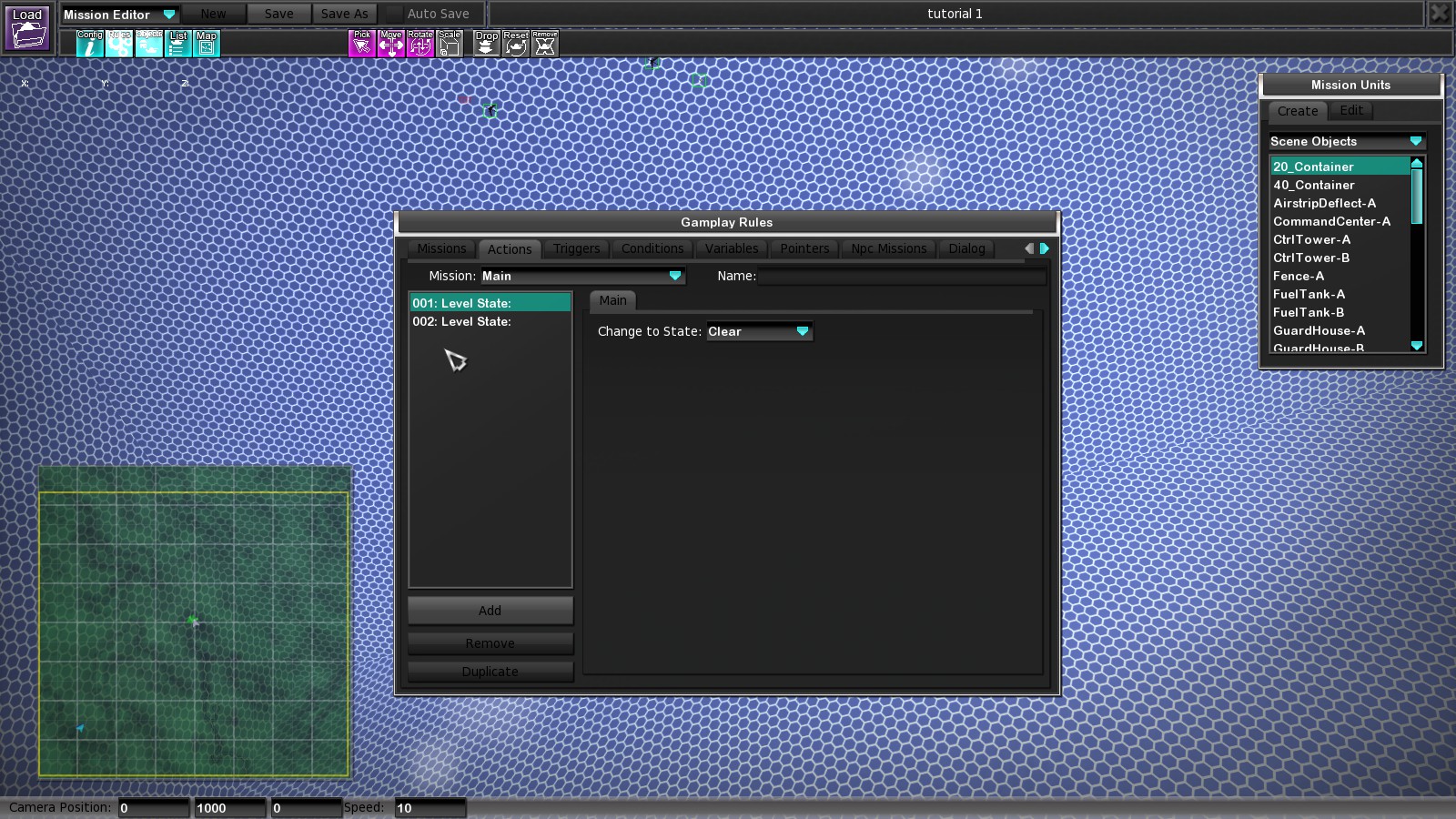 Next, go to the Triggers tab and create a new ‘Number of TGT Enemies’ Trigger. Make sure it starts active. 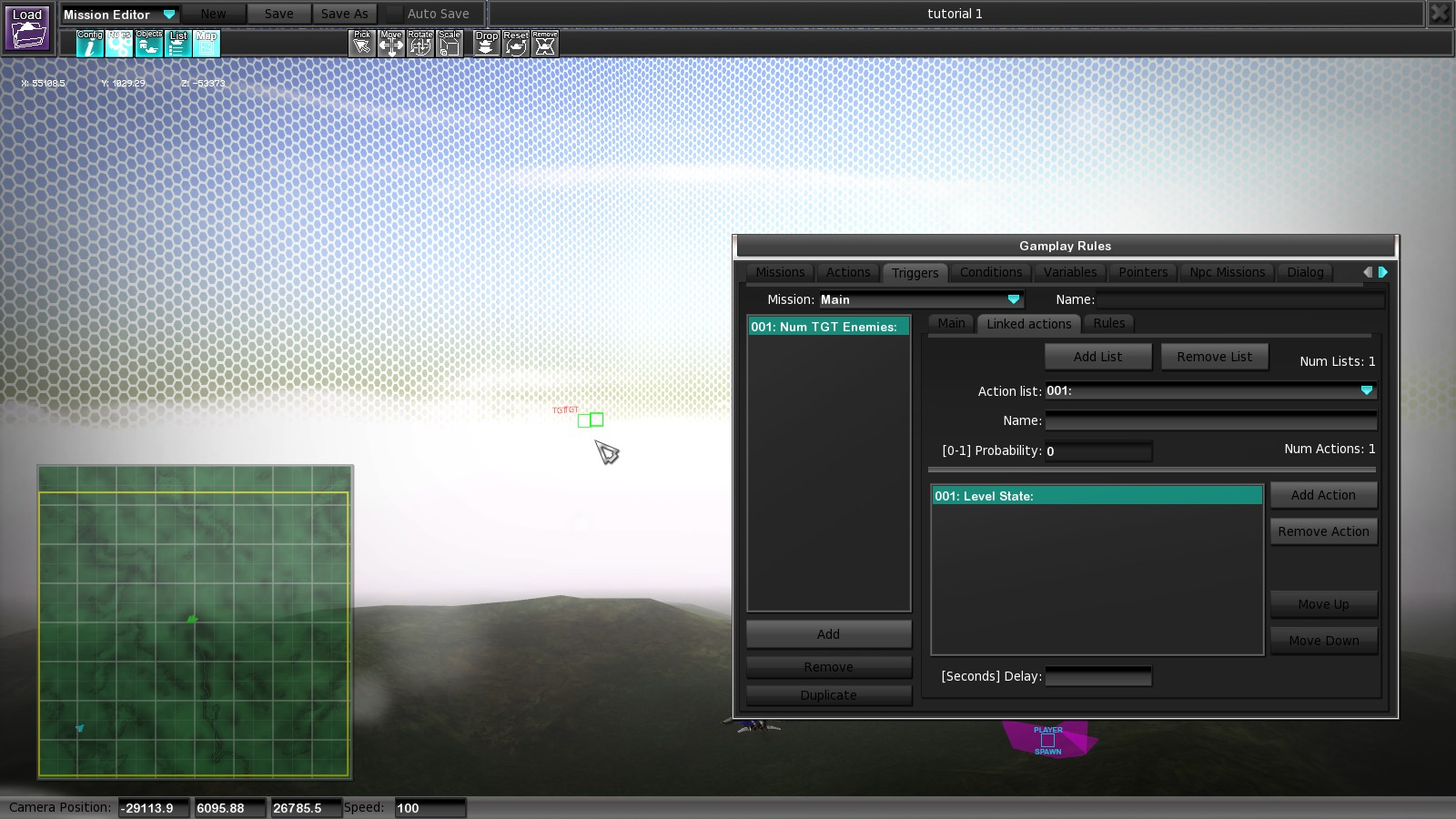 Go to the Linked Actions tab and create a new Action List (you’ll need it to attach actions to the trigger), and then select the first Action (Level State: Clear). This tells the game it should clear the level once the number of TGTs ingame falls to zero.

Next, create a Trigger for ‘Number of Enemy TGTs in Mission Area/Map’. Create a new Action List and link Action 2 to the trigger. Then, go to its final tab for Rules. 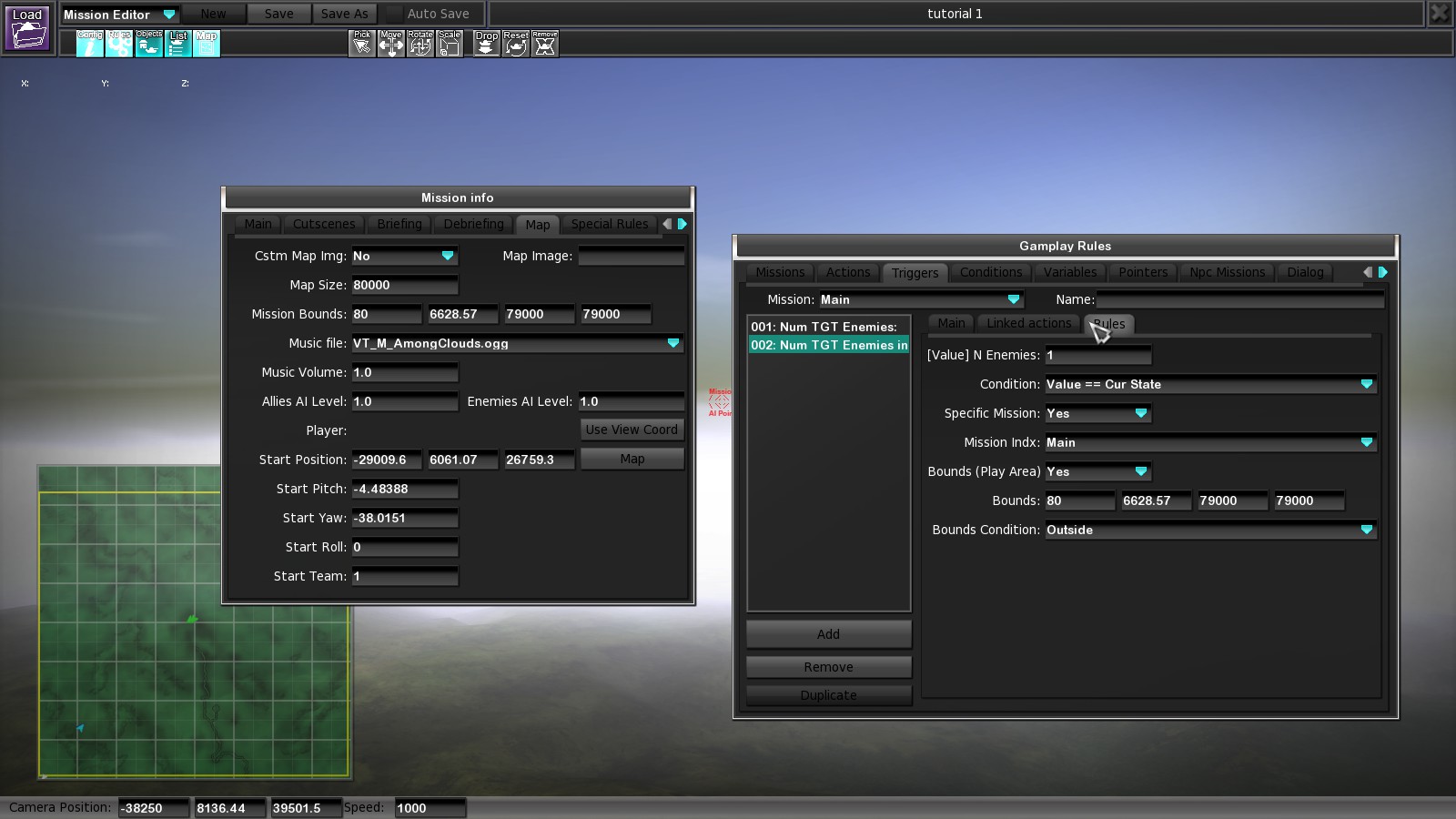 Select the Bounds (Play Area) and re-enter the map boundaries from the Config window. Finally, set the Bounds Condition to outside. The game will now fail the mission once one bomber flies out of the mission area.

We’re done! Save the mission using the buttons in the top left (you should be doing this throughout, actually), and quit the editor. More often than not the game will crash here because of some stupid bug we haven’t found yet but your mission data should be preserved.

Go to Battle Scenario and select your mission! 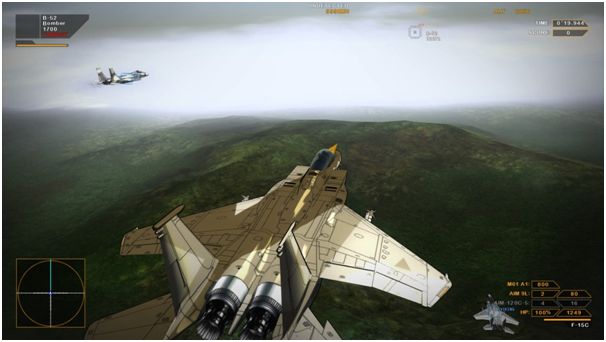 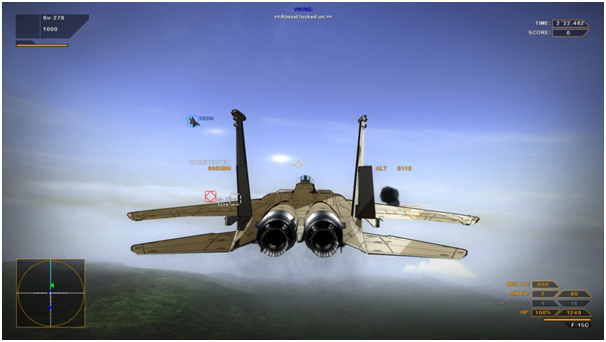 Well, that’s the gist of a bomber hunting mission. Of course, this is the most basic variant of the mission type, with no additional enemies spawning in and other fancy bits and pieces here and there, but the basics established here such as spawning units and setting mission structure will greatly aid people looking to create other, more complex mission types, and will serve as a foundation for your Vector Thrust content creation skills.

If you have any questions, don’t hesitate to ask in the comments, and I’ll answer them as best as I can.

Spawning enemies initially is easy enough, but, what's the most efficient way to spawn enemies after a mission has begun for the sake of making a mission with a sense of progression?

Oh - People should probably be told about the whole speed thing in the editor down there in the bottom left. It starts out at 10 which is impossibly slow for anything other than extremely precise movements, bumping it up to 1000 is a good measure (and something you did). Camera controls too; I'm aware there's WASD, but is there any way to move the camera up and down?

The only way to spawn enemies during a mission is using the Action/Trigger system. Alternatively you can create a new mission in the rules tab with a fixed event that spawns units and have a Action/Trigger to activate the mission when you want.

If you want to go up and down you'll need to look up and down, no height controls i'm afraid. Also press space for turbo boost when using camera.

How to make the mission could be play in mutilplay?Like COOP?