This is a tutorial for Doom 3 on how to script a bridge building itself using scripted events.

Before you try this tutorial you should know the basics about the Doom 3 Radiant like building brushes, creating entities and texturing. And then we can get started...

First of all create a room with 2 plattforms (remember this is just a test map) and a skybox around em. Now choose one plattform and place an info_player_start on it. If you're done, it could look like this: 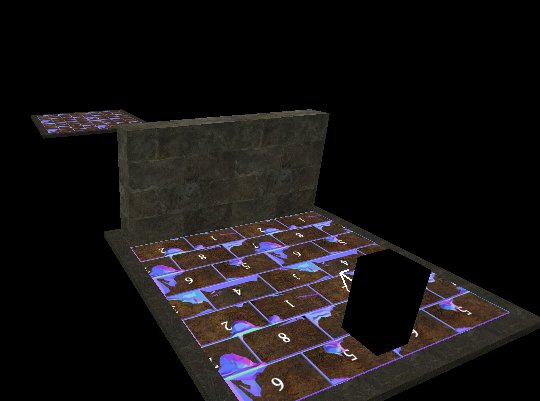 Once we got this down place a wall using a texture you like, I used "cbrick2c2" from the hell-texture folder. The good thing about this is, the pieces of the wall fit to the grid so it's easy to split the wall which is the next step. So split it into 11 pieces: 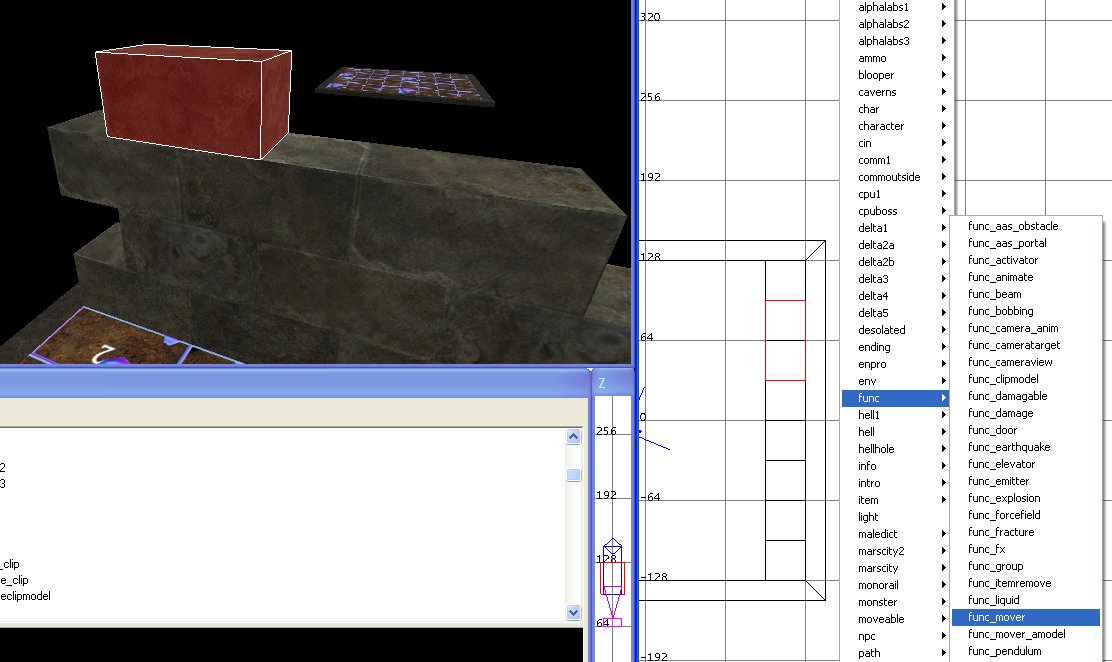 Next use the smallest grid (okay, grid of 1 shall be enough) and make a func_mover out of every piece. The small grid is important to get the center in the middle of that stone piece (I'll explain later why). 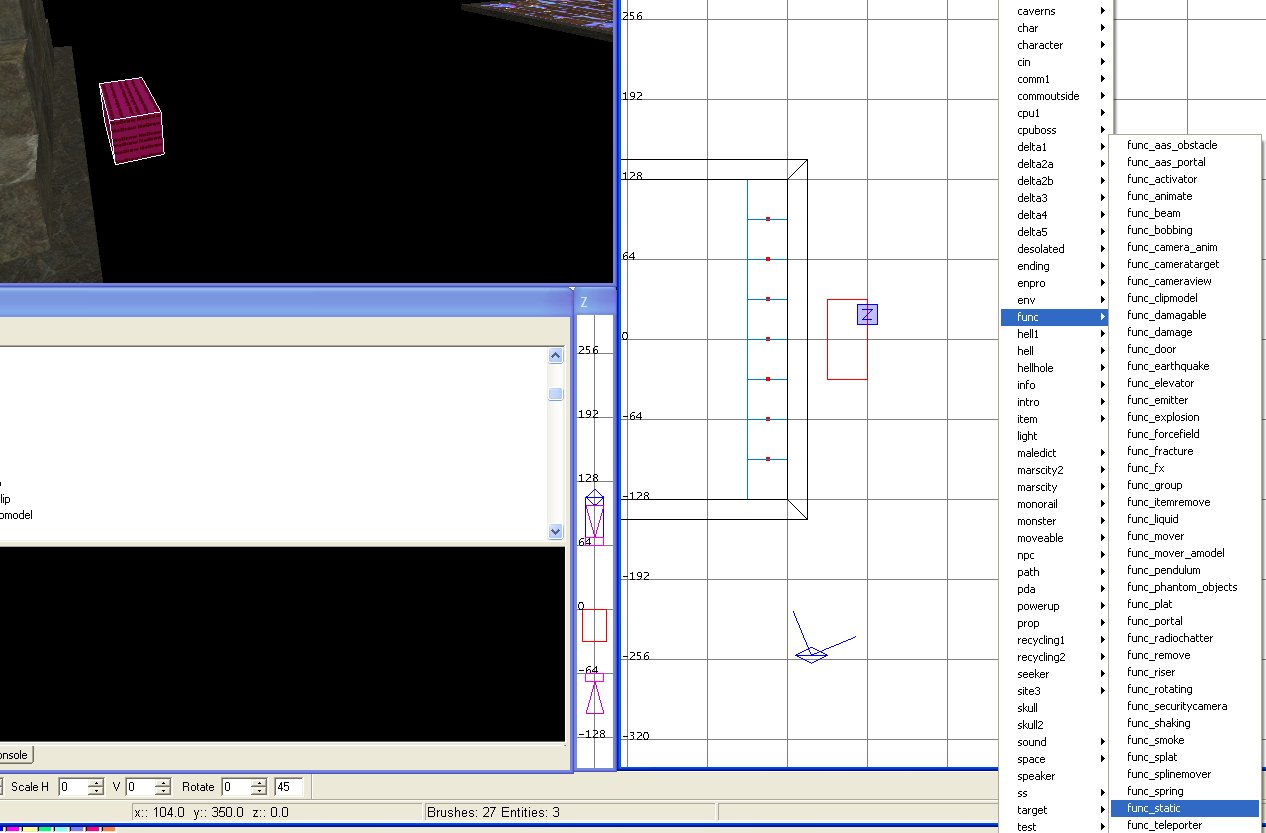 Now create eleven similar brushes with the exact size of the stones you already built. Those will be the places the mover will move to... then give em a "nodraw" texture (you'll find that in the common folder) and make a func_static out of every piece (using the smallest grid). Now why do you have to use the smallest grid? That's easy, cause if you don't it might happen Doom 3 is creating the center not completely in the middle of the entity. This might cause that the mover doesn't move to the exact point where the func_static is placed. Mostly there's no problem with it, but if you like to script a floor where every mover should be exact next to the other it might cause issues which are hard to fix.
But now you created 11 func_movers (1 to 11) and 11 func_statics (1 to 11): 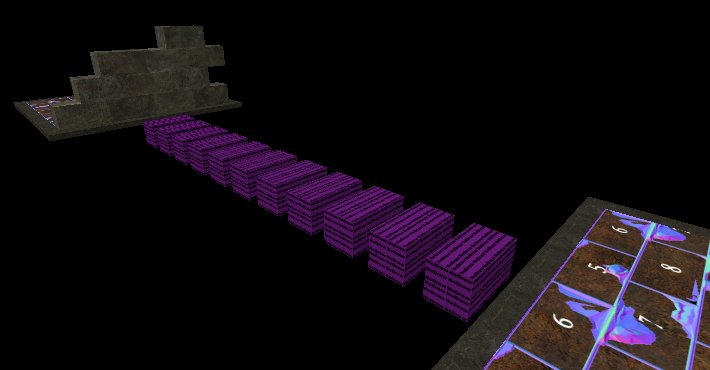 I have selected all func_statics and rotated them by 180 degrees, so that the stone on top (func_mover_1) will move to the func_static on the second plattform (will look much cooler).

Give that trigger_relay now the key "call" with the value "bridge", this is the script which will be called when moving through the trigger_once.

Now we're done on the radiant, go to your map folder where your map is placed and create a txt-file named out of your mapname and the ending script -> "mapname".script , in this case called "script.script\".

Now open it up: 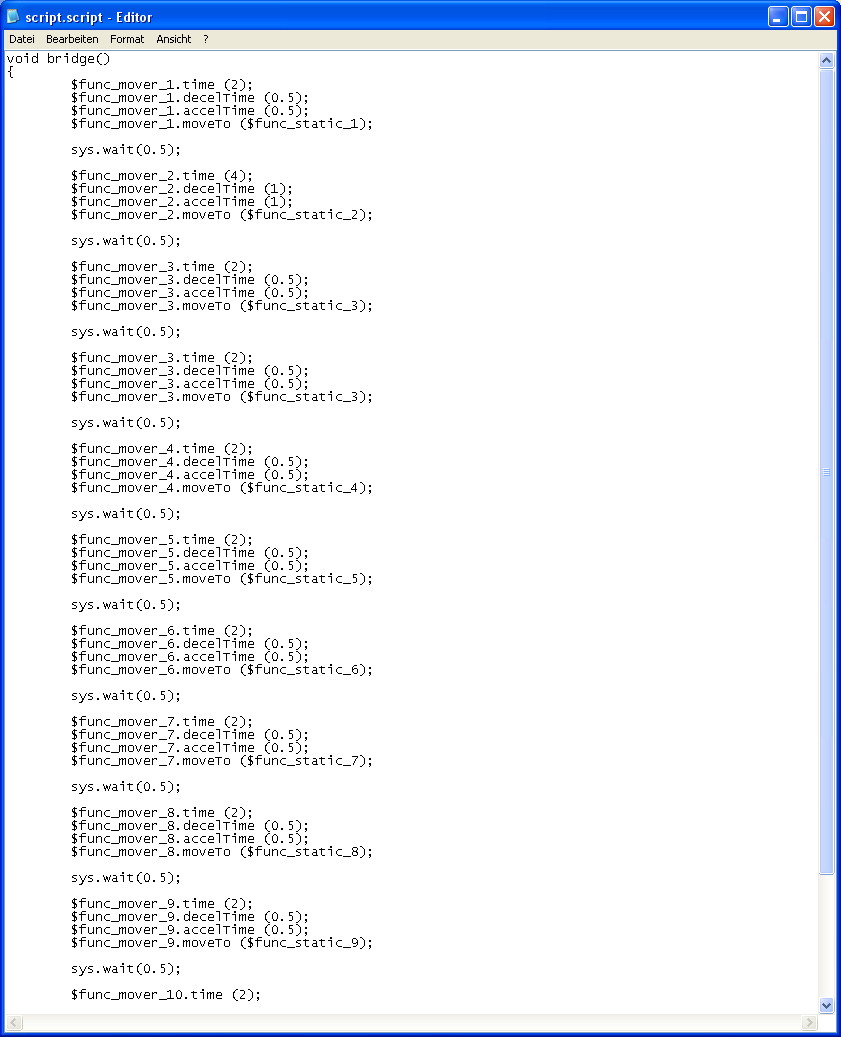 Now we need 11 stages to make every func_mover move to it's func_static destination. So lets get started with the script itself you see above:

Now type in the first thing (explanation within):

sys.wait(0.5); // time to wait before the next action in seconds

Now copy this 10 times and replace the numbers, func_mover_1 to func_mover_2 and so on, also don't forget to change the numbers of the func_statics as well. Finally it should look like on the image above. 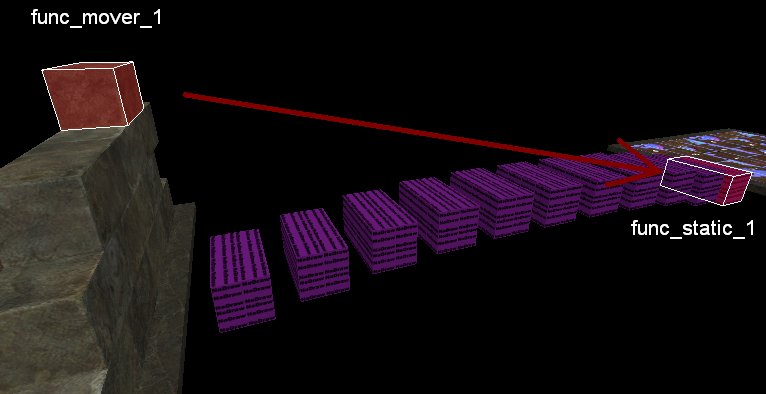 Now save it and as a little explanation: the script tells the func_movers to get to the func_statics kinda like in the screen above.

Now compile your map and save it. Go into Doom 3 and type "map 'mapname' , in this case map script, and here we go.

As soon as you go through the place where the trigger_once is the stones will build a bridge:

If there's any problem tell me. Also here's a downloadable version of the map, simply extract it to your maps folder:

So that's it, you did your first scripted bridge in Doom 3.

Good tutorial, i've always loved the bridge effect in D3 where the parts of the walls make the bridge itself.

Another way to do this instead of using the target entities is to use one target entity & then keep moving it to new locations (maybe on a spline) & then using the new origin for each successive block location. Why? there's an entity limit. If you remove your target entities you can have (in theory) 2x as many more blocks! :D

Entity limit? The limit is 4096 I think no one can pass the limit

Awesome tutorial keep it up!

I see TheHappyFriar has already been here, must of missed his post about this a few years back on EarthQuake.fuzzylogicinc.com :P