Post tutorial RSS How to exceed the 200 supply limit in StarCraft.

Erm. Just read it it is very informative. =) I suppose this could be considered a new years gift to the moddb starcraft community, since it is an age old "problem" with starcraft. Alot of great mappers as well seem to know this but never felt like sharing it. Another thing this DOES NOT require coding ;)Credits to who originally made the charts goes to SomeIdiotNerd on GhoztCraft and other credits I am completely confused about... The calculator in one of the quotes is credit to O)FaRTy1billion.

CHARTS BECAME COMPLETELY UNREADABLE, SO I REMOVED THEM, THEY ARE POSTED AS REPLIES.


The lists are a bit messy I tried my best to make them even but there's just to many x.x...

"Place Nuke for players 181, 217, 253, for player one to increase the actual limit.
For player 2, 182, 218, and 254. That should be enough to remind myself ;)
Other players in this list will also increase the current supply and the used supply."
-This is what I put down in a notepad along with the charts.

The unit chart is a full list of every !!!Useable!!! unit in starcraft and what they add to the current supply, the used
supply, and the supply limit, while the player chart tells you what player to set them as to increase those.
An example is placeing a Marine on the map owned by Player 157 to increase the available supply (lets say, 25 is used, so
then you would have 25/25 if you don't have any command centers or supply depots) For player 1.
My guess is that (although I havn't tested yet) buildings that are placed that will give a certain amount of used, available,
or increase the limit of the supply, require the player number listed under the Buildings for the players 1 through 8.

The charts were originally done by SomeIdiotNerd on GhoztCraft. At least that is as far as I can trace back.

Note: This requires having a 3rd party map editor like SCMDraft 2.

Now that explanation I put is because he did not describe it clearly so I had to do a bit of experimenting and I was able to easily figure it out. This is what he originally said,

4. Use the Supply Modifier Unit List (which i will provide) to find values that add up to what you want. Be sure to take note of whether or not what you are using is a building or unit as we will use this later! note: it doesn't matter what race it is for this list.
(Example:
Player 1: "Nuclear Missile 400 Unit" Two will add up for my 800 Max.
"Citadel of Adun 100 Building" 100 for my initial available.
Player 2: "Protoss Nexus 200 Building" 1 adds up to my 200 Max.
"Protoss Nexus 200 Building" 1 adds up to my 200 available

Here is a couple of pictures: 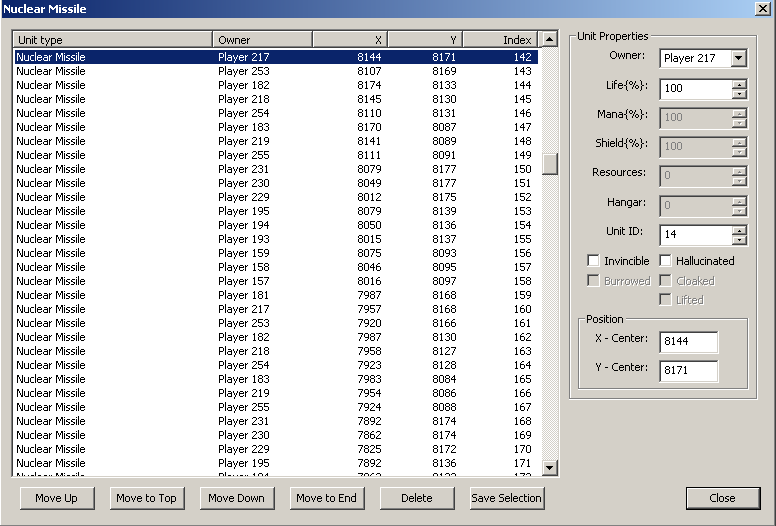 That particular nuclear missile is adding 400 to the maximum supply limit for player one. The rest are adding to the limit of supply or the current supply for players 1 through 4. 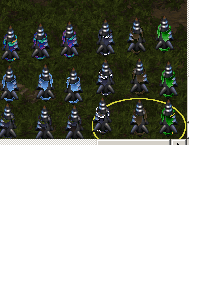 SomeIdiotNerd said "Credits goes to LegacyWeapon, he wrote the original tutorial, I paraphrased it and added more examples.
Original Tutorial" For the credits but I am troubled by what O)FaRTy1billion said later down the thread,

Â "Place a Player 217 nuclear missile anywhere on the map. It will add 400 to the supply limit for Player 1.

The reason I am here is that I am deeply bothered by this topic... Not because it exists or what is in it, but that it is miscredited to LegacyWeapon. SIN, where did you even come up with LegacyWeapon?

Original Source. You could have at least put that, SomeIdiotNerd.
I also have made this that may help you find which player IDs to use more easily. "

So, I am highly confused to where credits for the chart or the tutorial that SomeIdiotNerd put...

Fixed Links:
Maplantis.org This is the correct and working link, it's just that I think Maplantis shutdown or something.... Panschk.de This may be who they "merged' with...

If some of the images is to small just view them. If you maybe don't know how to do that for firefox right on the image and click view image, internet explorer at least wont let me do it but if it lets you, you should be able to right click and click show picture. just in case though,
here is the image url: Img262.imageshack.us

And for future references I do not know how to delete the nuclear missile from the map x.x... if your that worried try a different unit that can actually be deleted. Like, try putting 4 Goliath's on the map.

Sorry about the massive post spam. I didn't feel like fixing that list since it's moddb's fault anyways for not allowing words longer then 80 characters... I'm sorry but it is T_T

I forget if posts count toward experience if they do please do not count these!!