Posted by ytres on Nov 14th, 2010 - Intermediate Client Side Coding 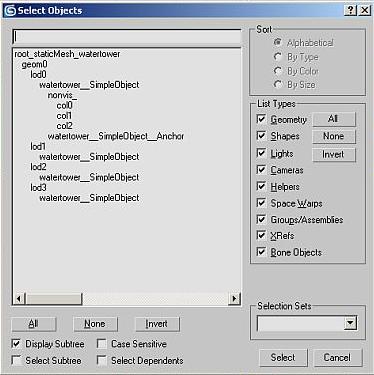 A Static where i want to add children to from within the editor ( Bundle): 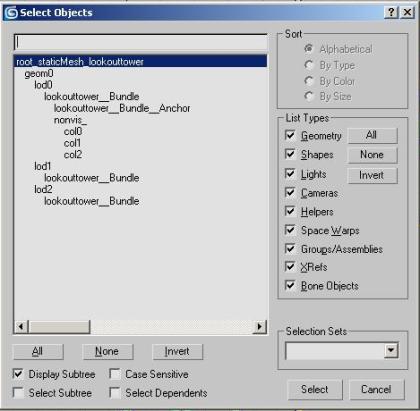 A destroyable object (Oiltank in this case). 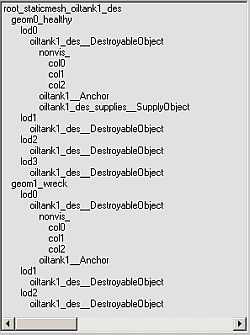 A simple Car with Steering Wheel:

A tank with main turret and gun( 2 pictures. This tank has no additional hullgunner) : 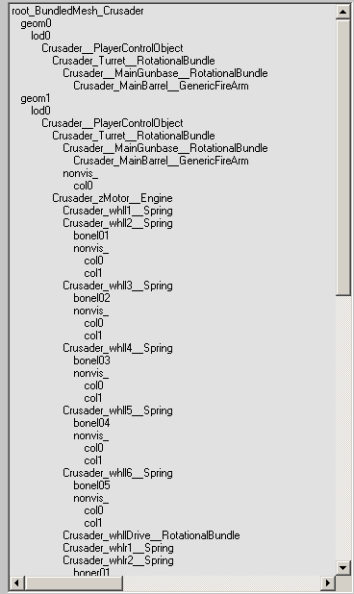 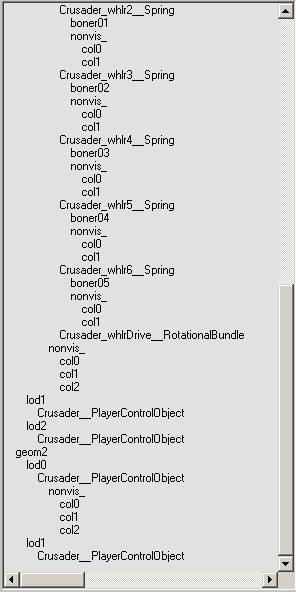 A prop driven aircraft with landing gear and control surfaces:

The
aircraft needs explanation. If you watch cosely, there's a bone in the
rear wheel. This bone makes the rear suspension move with the wheel,
meaning the main mesh has a skin modifier.

A Rotor (this time its a propeller for the above BF109) 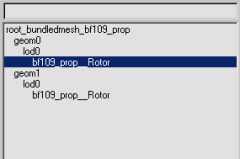 geom0 is the solid model , geom1 is 2 planes with opposing faces carrying the blurtexture

A boat with additional gunner and a moving enginedummy: 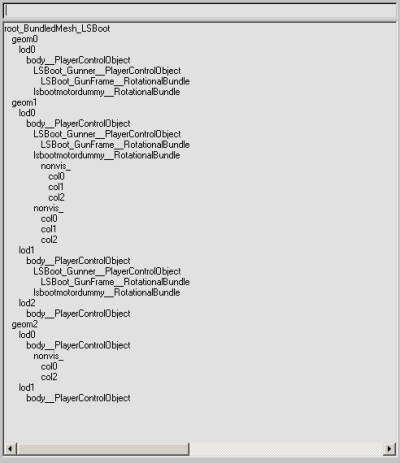 Note that any floatingBundles, Wings and the shipengine are later added with the editor.

A stationary AT gun with a rotating main gun (frame) on a stationary base: 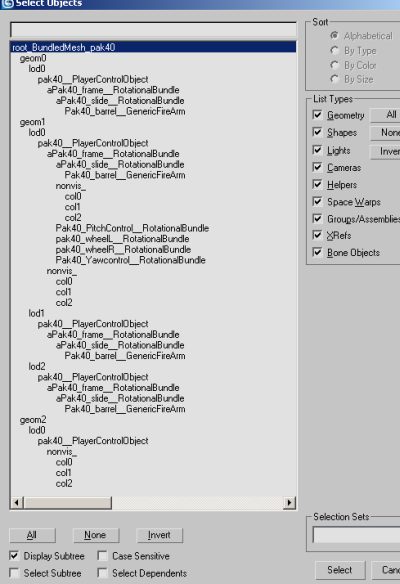 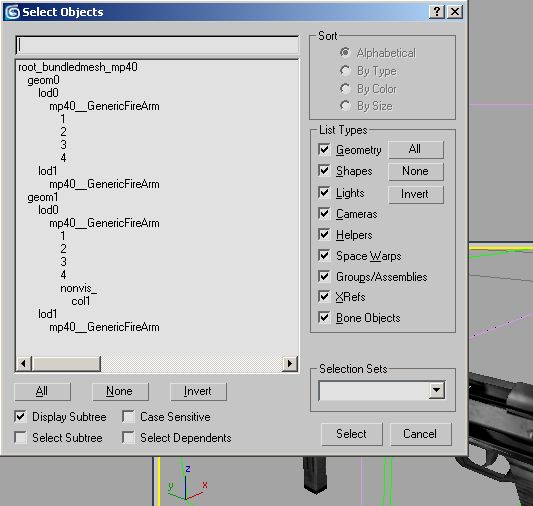 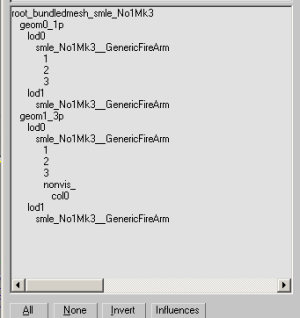 A visible projectile ( note that most small projectiles are code-only objects) . This here is a torpedo: 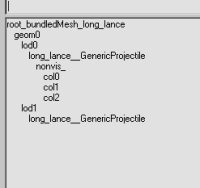 A particle ( used in destruction effects ): 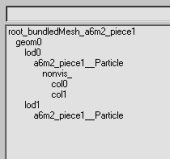 Kits
hierarchy with 3 Infantry sets, a pilot and a tanker set, and 4 dropkit
geometries (4 pictures). Note that most of the second half is occupied
by the imported skeleton, starting at 'root_skeleton_3p_setup' . The
'ger_Kits__SimpleObject' is the headwear (helmet or cap): 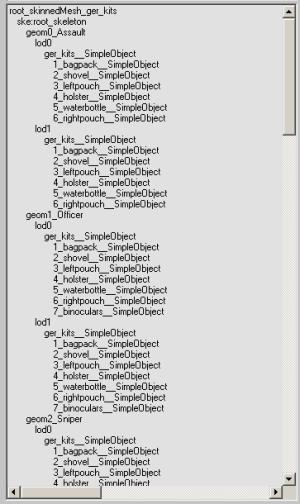 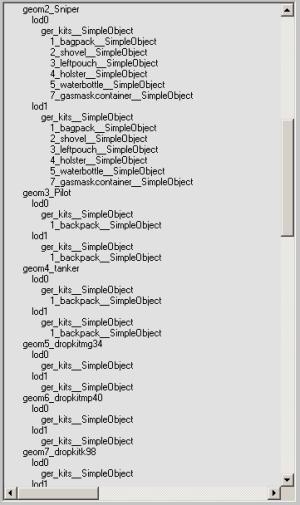 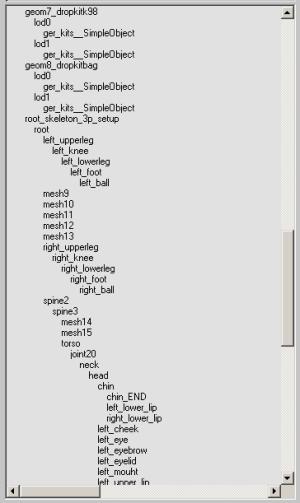 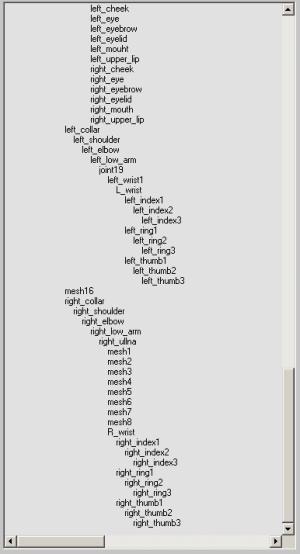 Note
also, the name of the object is only chosen for congruency among the
objects. The bagpack of the pilot e.g. would really be a parachute,
while it is the vest for the tanker.... I did this to avoid problems
while exporting. The skeleton is a child of the soldier_root. This
worked best...

A sample hierarchy for a soldier (3 pictures ): 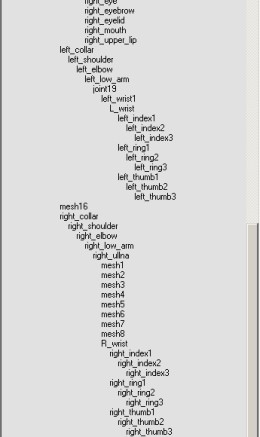 A sample animation export
scene for 1P animation. Again, most of the hierachy is occupied by the
1P skeleton. mesh1 to mesh7 are my weapon parts:

Hierachies
are necessary to bring the model into a structure the game understands.
Your model hierarchy will be exported to the .con file in text form and
of course is saved in the bundled-,skinned- or staticmesh.
Hierachies are created by two basic buttons in the toolbar of gmax and 3DS. The first is the common 'Select by Name' button:

This
opens the window where all of the above screenshots come from. Checking
'Display Subtree' in this window enables the above view.
The tool for parenting objects is the 'Select and Link' button in your toolbar :

Select the object you want to make a child then press the 'Select and
Link' button. This will open a window very similar to the 'Select by
Name' Window and lets you choose a parent. This process is called
'parenting an object' mostly in this forum.
The 'root' is just that :
The Parent to all other objects. From there on, the geoms are children
to the 'root', the lod's (level of detail) are children of the geoms.
These objects are purely for organizing the meshes which will be the
children of these basic 'tree' helper objects.

Thanks for the tut upload!