Important changes to the Dark Eldar faction from the vanilla game. 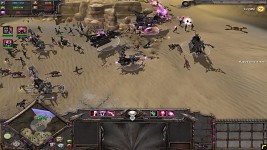 Fast but fragile, the Dark Eldar rely on their hit and run tactics and their Soul abilities. Their high range damage and long range is matched only by their melee attacks. Their vehicles likewise are well suited to hit and run tactics with vehicles having the ability to jump or having high speed.

Some new researches have been added to improve the Dark Eldar troops range capabilities or their general survivability. Their Soul powers have undergone a slight overhaul as well.

Dark Eldar Warriors have been swapped with Mandrakes and are now the main capping unit, similar to Guardians for Eldar. They have been made cheaper, more fragile and their members per squad increased from 6 to 8.
Mandrakes are now single unit squads suited to shock tactics with their high health and damage and also now execute units with low health. They can also attach to squads to be a hidden threat in melee attacks. They now do more damage to Heavy Infantry as well.
Scourges can now disrupt enemy troops with their Sonic Grenades which do no damage but do high morale damage and knock down enemy units.
Wyches can how use Haywire Bombs for added anti-vehicle damage. Their Combat Drugs can now only target a single squad so their effectiveness has been reduced slightly.
Warp Beasts damage has been reduced slightly and their damage to Commanders has been reduced further.

The Dais of Destruction Dark Scythe ability has been made less effective but its weapons have been made more effective.

Dark Eldar can now build Mine Fields.
The Slave Chamber can now ferry troops between them and can now act as a mini turret when upgraded with the Gruesome Display add-on, dealing relatively low damage but high disruption with their knockback. Its overall effectiveness can also be upgraded.
Most Dark Eldar buildings can now drain enemy troop morale when their Gruesome Display add-ons have been built.

Kabalite Trueborn Warriors are a new elite troop choice with anti infantry Splinter Cannons that can be upgraded to Shredders for increased effectiveness against infantry and morale, Dark Matter Blasters for close ranged damage against vehicles and buildings, or Dark Lances to deal long ranged damage against vehicles. Their weapons have long range and cannot fire on the move.
Wracks are also an elite troop choice that can poison enemy units in melee and can be upgraded with ranged Liquifier Guns that deal random damage over time but are effective against most armour types.