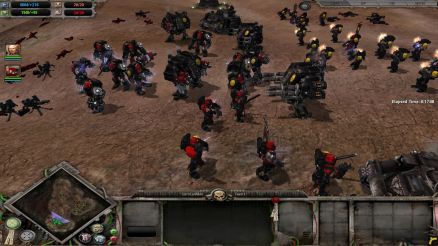 This mod aims to...well it doesn't have an aim. Apart from causing pain and suffering - I mean fun to the end user. It just makes the game more fun to me, and hopefully to you as well with any luck. It started off as a minor change mod that slowly evolved into this monstrosity (I mean that in a good way) as a result of me going completely bonkers, with a few little helpful suggestions from the people with the suggestions.

Eldar and Sisters of Battle

Anyway a lot of things have been changed, swapped or otherwise bastardised in a fashion that may or may not be balanced but that is not my primary concern. Also included is the Dawn of Skirmish AI mod version something or other. Thanks to them and such.

Most of the fixes in the Nobrainer Bugs list are included this mod, as well as most, if not all, of the fixes from the Bugfix mod by Maktaka. Thanks go to him for compiling the big list of things to fix and for providing the Bugfix mod.

Some thanks go to Argonaut for his Survival mod which I spent many hours playing and Fuggles for his random win conditions mod and for his Unofficial mod of the aforementioned Survival mod.

Big thanks to Zany Reaper for allowing me to use a lot of his units from his TTRU mod, such as the Tau Mines, Broadsides and Drones, Necron Destroyer and Heavy Destroyer with resurrection animations, DE Reaver with Blaster upgrade and Talos with jump animation.

Also honourable mentions go to the Firestorm over Kronus (or soon to be Kaurava) mod for generously allowing modders with no talent for modelling to use their models and stuff, Gerberman for a lot of FX and stuff, Catwell for the GUO and KoS models and Gr0rc for his OE work on them and to the DoWXP mod team for some bits and pieces.

Visit the Relicnews forum page for the mod here

Added Lychguard (thanks to Miros, Kekoulis and FragJacker)

Commanders are no longer soft capped at 2

Adds new units for Imperial Guard and Sisters of Battle Fixes a few issues for Orks, Necrons and Tau.

This is the full installer for Version 2.0 of CornCobMan's Fun Mod for Soulstorm.

This is the full installer for Version 1.88 of CornCobMan's Fun Mod for Soulstorm.

This is the full installer for Version 1.87 of CornCobMan's Fun Mod for Soulstorm.

This is the full installer for Version 1.86 of CornCobMan's Fun Mod for Soulstorm.

I noticed that there isnt a section on tau what was added if I may ask?

There hasn't been anything added for Tau in this release. Breaches were added in the previous patch and the next patch may or may not have some new Tau units. I haven't decided yet.

Well, got a "Bad Model Check the log" with the force commander... Any idea how to fix it ?

The force commander and Librarian in terminator armor are missing their hand when having the melta pistol equipped, The champlain is actually fine though. Is the glosslyness on the terminator armor intentional? Love the new stuff so much has changed since 2 years ago, the fire prisms are pretty awesome too, possibly my favorite cosmetic change other than terminators of course

I'll ask Kekoulis about it later. The terminator commanders shininess I actually turned down a bit, but i could probably do more with it.

If you need a picture or video I can happily send you one, if required of course. About the shininess, is it possible for the commander to share the same material properties of your Terminator models?

I have changed the texture for the FC to more closely match the normal Terminators. The missing hands should be fixed fairly soon.

Funny you mention the Wraithlord, I was working on it about 10 minutes ago. In the next release it will use the model from the Dawn of Eldar mod.

Oh hello I'm Hollow and got my seal of aproval 10/10. Would lulz again.