Hello Everyone, Our team has some excited and long-awaited news to share with you! After years of delays and putting the development on hold many times, ZPS on Source 2013 is finally happening!

Hello Everyone,
Our team has some excited and long-awaited news to share with you! After years of delays and putting the development on hold many times, ZPS on Source 2013 is finally happening!
Before we get into the details of what this will mean for the game, we must introduce our newest programmer, who offered to do the port of SDK 2007 to the latest Source Engine version SDK 2013, and is willing to support ZPS even more: Jonnyboy0719, from BrainBread2! He has been doing outstanding work porting this game to a proper build, fixing up lots of old bugs, issues and critical glitches from the old engine and making this happen for us!

So let's get to the news and what this means for the community.

Source 2013 was released awhile ago by Valve, and we were working on a port already back in 2014, which would be the release of ZPS 2.5 that never went further because of delays and other problems that the team had to face.

Now, with this new engine running on our upcoming build, we're excited to introduce the following:

If everything goes as planned, we'll be releasing these features in ZPS v3.0, along with other improvements, as soon as possible. For now, enjoy this small teaser, showcasing the alpha state of ZPS 3.0

Pedro was in development for a long time back in 2011, by our 3D artist EArkham. He's a ex-drug dealer from Mexico before the apocalypse started, and we'll make you guys finally meet him in-game sooner than you think! Here are some previews of what he looks like: 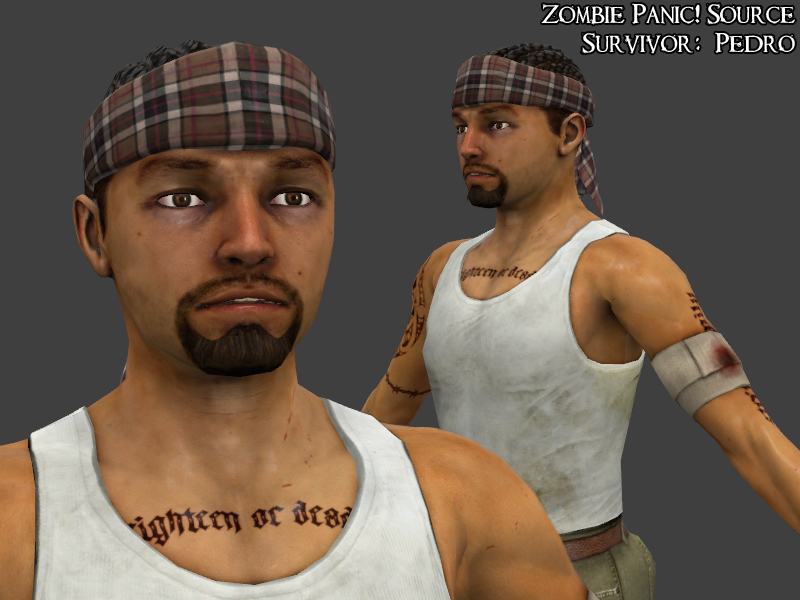 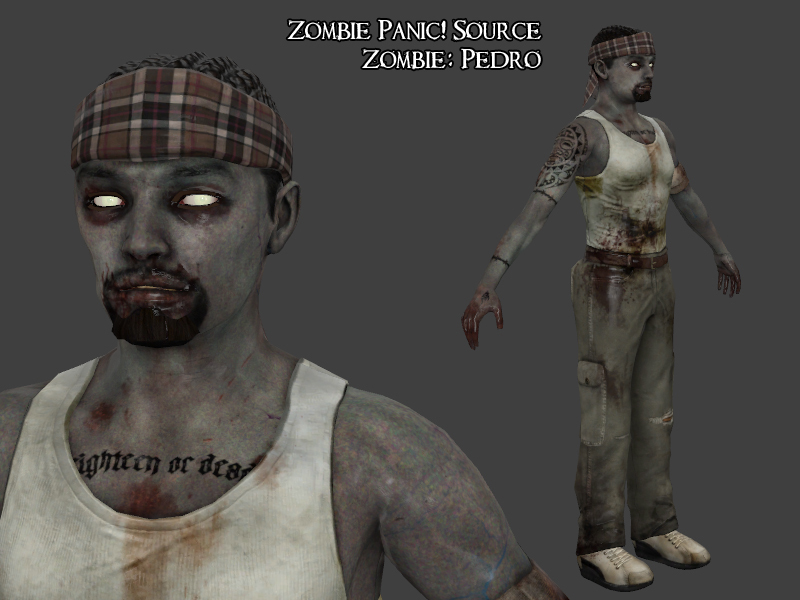 Since this is a totally new engine port, basically rewriting the game from scratch, Jonnyboy will be doing his best to make everything work how it is supposed to be working in ZPS. However, like we mentioned above, some things had to be changed, which will affect some custom content that was compiled for the Source SDK 2007.

This will affect all of the custom maps and content as they will in compatible with the new engine. The major changes on the port is a flip of the names/numbers that determine how your map reads the Teams (Human, Zombie and the Spec). Technically speaking, if any map running the entities: "filter_activator_team" and "func_ladder"; and was compiled in SDK 2007, it will be unplayable in ZPS 3.0 version.

But don't PANIC! yet. if you're reading this, are a community mapper and still active, then don't worry, the changes that have to be made are small and easy to do. We'll create a guide explaining how to do these small changes on your map, recompile it properly to be compatible and ready for the future release in no time! We're informing you now so that you have time to prepare but as we are not fully done with the build, other requirements needed to make maps work on the engine may be discovered. If so, we will inform you in due time.

Speaking of maps, this update will include two old, popular community maps, made official: Zomboeing and FrozenHeart! Both objective, having lots of additional details and other changes that have improved the gameplay and look of the maps. We would like to thank Ratboy and Darb Dude for doing an amazing job on bringing back Zomboeing as an fully-fledged and incredibly entertaining experience!

Improved Server Security - The days of malicious crashes are behind us.

One of the most important changes in this update is the solution to the age-old exploit that has been used to carry out server attacks for years. This behavior is not something we want to see carried over to the new build.

To help secure the community until the new build is ready, we've set up a Server Setup and Security threads. With the help of the community, their threads will help you secure your server to deal with the attacks to the best of the current engines ability.

When will this update roll out?

After all these information, you guys might be asking yourself: update, when!?
As we've mentioned, the build is currently in Alpha state, and our team is doing our best to bring you guys this update as quick as possible. The update is focused on bringing stability and security to the game, adding a bunch of new content is something our team wishes to do but we won't let it prolong the release date of this crucial update.
Future updates, that will introduce more new content and tweaks, will be shared with you as always through our announcements.

In the meantime, share these exciting news with your old friends through Steam, Facebook and even on Twitter! Tell them that ZPS is coming back in a more secure and stable state than ever seen before.
The next announcement will be the changelog of the ZPS 3.0 build. Looking forward to it! We sure are.

It's Nice that this is Still being Worked on.

Is there any chance we could get Bots in a Future Update?

There will never be functional bots made for ZPS, there will however be bots you can spawn if testmode is enabled, but its only for testing purposes.

And what will be the Excuse for that?

ZPS is a PvP modification, it's not designed to have bots, and never will. Just adding 'functional' bots, will waste development time, because they have no actual AI, and writing AI from scratch will again, waste time, when there is more important things to do.

I understand if people want bots, but It won't happen.

What if another Coder Joined the Team, would it be more possible then?

Jonnyboy is a true good person, he helped me personally teaching me how to rig and port weapons into source engine! He's the living true definition of modder, I'm happy to see he's working on this project!

What I would like to see is a new animation system that can combine fp and 3p animations in a smoother framework. And more hi-poly characters, especially the old bugged ones.

Reworking animations and other 3D-2D viewmodels we can add that on our to-do list. We're always looking to create new content to this game for more years, if the time allows us.

Cool, I think a rig akin to Titanfall would serve excellently for ZPS aswell. It would also be cool to make the weapons more functional.

Do you have anyone who could extend the animation framework for the game?

This. Sounds. Amazing.
I loved ZPS back in the day.
I wish you the best on your development process and hope all goes well.

There will be a Linux support for sure. But for Mac, I don't think so. Sorry.

I am so happy to see that you guys are advancing into the next stage of development for ZPS, you guys wont regret your valuable time as long as you listen to the community. And make it as similar as possible to the ZPS we all know and love. cheers.

This port will be the same ZPS we all known but better and smoother. Most of engine bugs will be fixed, official maps improved and compatibility with this new engine and we'll be looking to create new content on the future versions of the game. But of course, on our free time.

I believe in you dudes, i am imagining all the good that things that will come of this. ZPS revived, more fun, less lag, hopefully no trolls, and no more of Fred crashing servers.

Awesome! So whats a hardcore map supposed to be like? Im curious...

I can not say too much stuff about our first official hardcore map. We've been planning how we could make this gamemode fun for everybody with a map that wouldn't be unfair and poorly designed.

So you must wait a little bit more to check your map by yourself, with friends!

I've been playing ZPS since 2010, I absolutely love this game and would love a new surge of players. I honestly hope this wins MoTY again. Best mod ever and it's free! You're doing God's work guys!! May Gaben smile on you all.