The recent outpouring of support since our official announcement has been phenomenal! Thanks to our dedicated community, we’ve received coverage all across the Internet and our forums are already a bustling hub of activity. Naturally a lot of you have questions about the specifics of Chivalry. What’s going to change? What’s staying the same? Find the answers to your most burning questions in our first FAQ article (with pictures!). Visit our new developer blog for more larger pictures.

So will the game be a standalone, or do we need to buy another game?
It will indeed be standalone and no other game will be required to play Chivalry.

When I read the ‘about page‘ on your website it seemed like there were less classes than there are in Age of Chivalry, is this true?
Whilst it seems there are fewer classes to select, don’t be fooled by thinking there is less variety! Since we want to keep you on your toes, I won’t reveal too much except to say in the case of the Archer for example, you will have the option to select virtually everything you want to take into battle with you. A large variety of primary and secondary weapons such as Longbows, Crossbows, Swords and Daggers will be at your disposal. You will be able to mix and match to your heart’s desire, and this is the same for every other class too – each having unique weapons. 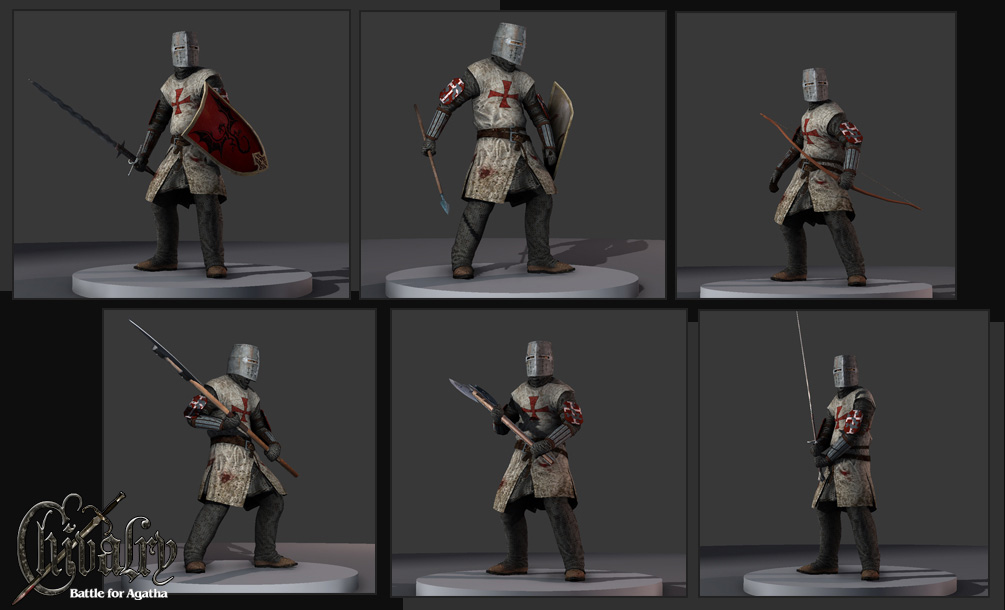 The “customize your layout” stuff sounds extremely awesome, but won’t it be much harder to balance then classes?
We plan on having a mixed class layout system, one that is not entirely fixed nor freeform. Classes to be available in the game are Archer, Man at Arms, Vanguard, Knight and Support. The class you select will determine your physical attributes including speed and health and will also define what equipment options are available to you. Each class will have a multitude of primary and secondary weapon options to customize their layout without allowing them to stray too far from their primary classes role on the battlefield. 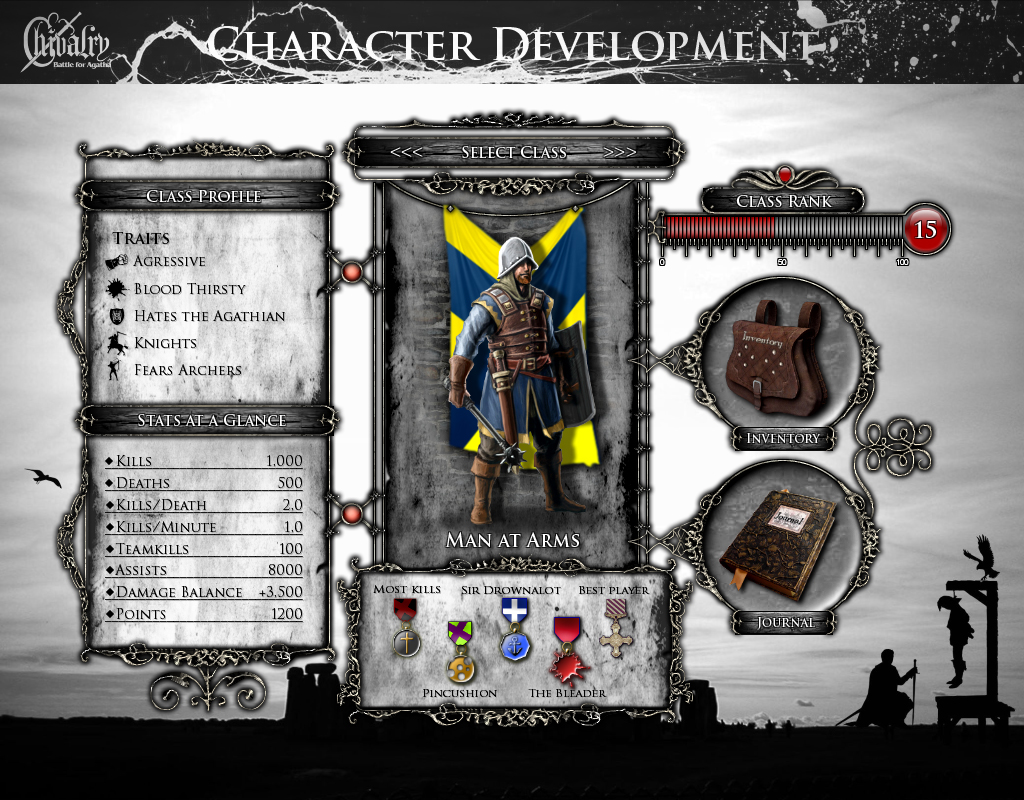 Unreal Engine 3 and melee: do you think the UE3 can handle very close combat better then Source? E.g. Sometimes in Source your extreme close hits “lagged”/”wobbled” into thin air, not hitting stuff.
Short answer, yes. We have also changed the way hit detection is done from Source which will result in much more accurate hit detection. In source we watched the weapons in slow motion and manually assigned intervals and angles for the traces to fire; in Chivalry we have the traces automatically firing the length and width of the weapon via code, eliminating all manual errors. Furthermore, in Source hit detection was based on first person animations. This time we will be basing it on third person animations so what you see is what is really happening. Of course lag will still be a factor, but we believe we have taken many big steps towards a much more reliable and precise hit detection system.

What are the plans for the siege machines which we had in Age of Chivalry?
Siege machines will be included in the game on a as-needed basis and as a result we are not ready to talk about all of them. But I can tell you that items such as catapults and ballista’s will be able to be destroyed and repaired and thus will act as secondary objectives in all maps they are placed, expanding upon the variety and tactical options available to players in-game. 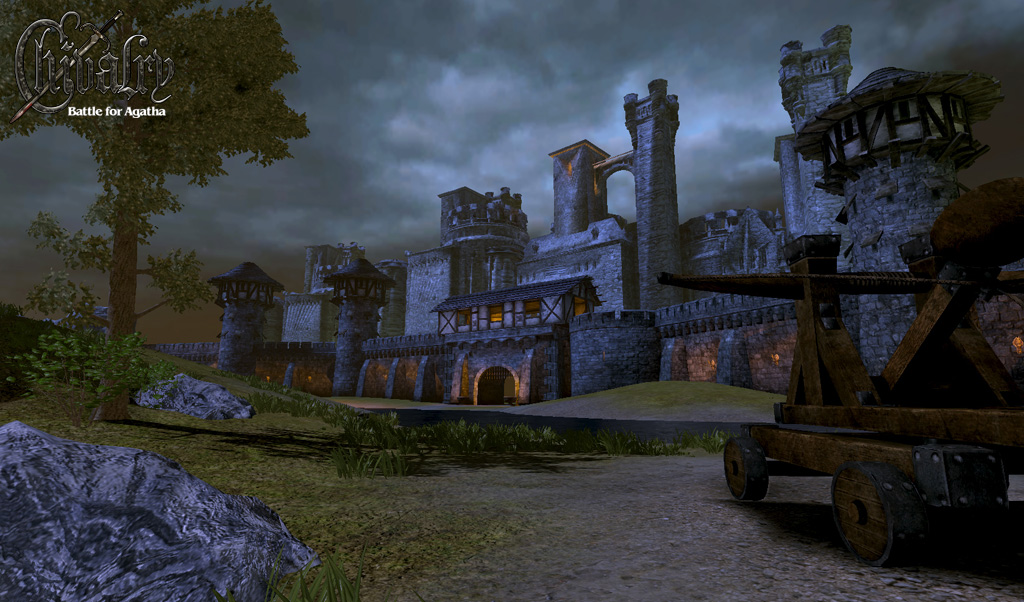 Will the environments include more destructible terrain?
Absolutely. Manipulating the environment to gain a strategic advantage will be possible in Chivalry in ways we could never have hoped for in AoC. Can’t give away too many details about specific maps here, but players will be able to open new pathways to assault the enemy or shut down pathways for the opposing team. This will create additional secondary objectives and again increase the variety with which objectives can be completed/defended. Of course, you will also be able to activate traps and use other environmental hazards to your advantage to aid in the glorious dispatching of your opponents!

How big are the maps going to be?
The maps will be larger than the Source versions to accommodate the increased player cap. We will also make it a focus to remove the “cramped” feeling of some indoor environments from AoC.

Well, that’s it for now. Have a questions of your own? Ask away on our forums or post a comment below.

What? the crusader is awesome!

Also it looks really great, i cant wait for the release.

Yeah the crusader is awesome if you want to play a class that doesn't require skill.

Well im a big fan of crusaders,and i would like to see them in game,but i think devs got little wrong with the class,i mean these guys look lot more like Templars,and knights didnt use longbows,they used Crossbows,and they were called crossbowmen obviously,which wore Kettle helmets. Then second mistake is the knight on the first picture,which is holding the Zweihander and a shield on the second hand,which is really wrong,Zweihanders(two handed swords) were very big swords,which required special skills to use them,and they were obviously held in 2 hands. In one hand,knights used Cutlass (european) swords. Well i cant say much about spearman,he looks very good,only thing is that spear must be a little more longer and very little thicker,because as i see,it more looks like a javelin. About the axeman,well knights didnt use two hander axes very often,especially the bardiche axe (on the left) was used by russian's more than europeans,and knights carried axes and maces with shields.

Well guys,the game looks great,if you fix these what i suggested,then you'll get yourself a great faction. Good luck!

Don't worry... the class pictured here will not wield all of these weapons, it's just to show animation poses.

I still dont understand why someone gave me thumbs down on my previous post,some people should go die somewhere.

Well your forgetting something, Age of Chivalry is a fantasy universe, not a medieval Europe recreation. Even then you make it sound like troops could only wear 1 set of equipment, and there was no exception to that.

I think it was the arrogance that got you that -1.

Ermm.. i was correcting the pictures... no matter what fantasy,im sure these guys arent making some kind of anime when guy holds 3x bigger sword then he is and starts slashing people. I corrected that theres no way knight can hold that weapon on the first picture for example,and that knight cant fire longbow effectively,and other stuff like that. Also,yeah troops more are capable of using one kind of weapon very effectively,instead of 10 and use them as idiots. Anyways,Dev's will decide better.

As soon as I saw your Class Profile Traits system: Marathon, Lightweight, Commando

Traits have nothing in common with perks. We'll be explaining how they work in a later update, though players familiar with the total war series might be able to make a decent guess...

Wow, I looked at the monitor with mah mouth widely open, because of the info you provided us.
Great work!
BTW: You hate the Agathian too? :) (As seen on the class profile)

Does it save your class and level and traits Eg.. for other matches and rounds?

Yes, experience in accumulated over all-time play, though the medals shown at the bottom of the screen there are single-map awards.

looks great i wish you could have a destructive castle and you could repair the bricks that would be good.

Why not add a more customizable system like APB has? Like adding your own banner on your armor or changing the style of the armor, types of shields, types of armor, ETC.

Time. We will consider more customization options after the initial release.

Really cool models you have there. =P
Can't whait to guive a try. ^^

I believe making these suggestions on the forums would be more effective.

You have plus one buyer :)

Sounds awesome. Too bad we're gonna have to pay for it. Personally I don't think any multiplayer only game is worth paying for unless it's only like 5 to 10 bucks.

Add a singleplayer campaign and I'm ready to pay 20 to 30 though.

Are you kidding me? Multiplayer is what makes the games worth what they are worth usually..

many people play games for the story manly, im one of them sometimes.

Fair comment, but personally I think that you can't spend entertainment money better than on a multi-player game, perhaps you could go to a couple of movies for the same amount of money but that's at most 10 hours, where as a MP game can offer thousands of hours of entertainment. SP games generally offer less hours of entertainment, though I understand that they appeal to a different market, just my personal take on it.

Age of Chivalry wouldn't be the same with AI enemies. It wouldn't feel as realistic in its own world without the complex decisions being made by real players to decide the fate of the battle. If you want a single player game in a style similar to this, try M&B or Dark Messiah.

I agree multiplayer reigns supreme for re-playability. That is what branches AoC away from other similar games is its multiplayer superiority.

This is an awesome post, but there is a bug with the post, the images aren't linked to their high res sources.

That's intentional. Go to http://www.chivalrythegame.com/blog/ and click on the images in that post to get the higher resolution image. :)

Amazing stuff! I can't wait to try this out.

I'd like to think of Age of Chivalry as a warm up, and this as the real thing :)
Great job so far guys, keep it up!

There will still be official tournaments taking place for Age of Chivalry so keep a look out for that ;)

are we going to have to actually buy this>?

I hope so, they deserve all the money they can get. I would like to buy it on steam.

Whoah, you just made my day.

Do you know the release date or when to expect beta/demo, and also is this gonna be steam release or something else