here is my new personal challenge for Wizards of Unica! I’m gonna draw 10 stages’ assets in two months! 50 new graphics each one so more or less 500 assets in 60 days!

If you are following Wizards of Unica since last year you know that lately I produced a bunch of assets. But because of the non-primary nature of this project (Luca and I have very busy life with business and family) is very easily to get lost into perfectionism and never-ending dev.

To avoid this I found very useful to give myself strict deadlines (as briefly exposed into my article “How to improve your Pixel Art”). In November 2016 I designed and painted 48 spells in two weeks and last month I needed to finalize and rework the entire enemy roster in 15 days. And now, I’m gonna face this new challenge, of 500 assets in two months!

The first week has already passed and had been great: I create almost from scratch the Church of Truce. Almost because I drawn this two mock up last year.

If you will choose to play as Exekiel, the Church of Truce will be the first stage, where Exekiel will collect his first Spirit, and the area will work as a tutorial, so things were need to be linear and captive player’s attention.

Inspiration. My influences for the creation of the Church of Truce were Saint Seiya, and a mix of ancient Greece and oriental culture. In fact, while all the Spirits in the game have a realistic inspiration from a real-life mythology, Truce and Havok in fact are originals. And if in my begins with pixel art I was very focus into detailed concept art preventive to the actual pixel drawing, I now dismissed that in favor of a more practical mood board and pencil sketches.

As you can see a mood board can really suggest you a lot, without the necessity of stick to a previous design, which is very helpful if you’re looking for a flexible approach as a solo artist as it’s my case. And the plot & the screenplay I wrote gave me a lot of visual ideas as well.

Symbolism. Because Exekiel and his opponent Rake will start in different locations their own adventure, I wanted those places to be antithetic. So I knew Exekiel would have started in a peaceful mediterranean place full of sun and rosmary, but signed by ruin. 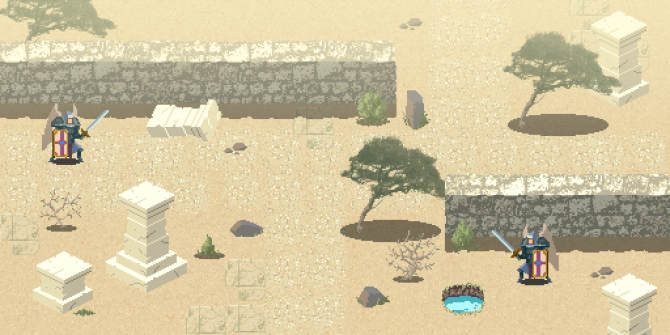 Day 2/60: Church of Truce, level 1. Refined assets and mock up. Still need a ruined version of the wall and broken vertical pillar. Do I need custom shadows for trees?

In contrast to this sunny and dry place (his actual seniority?) I imagine Exekiel descend into the ruined darkness of his past, but still with life and hope (the moss, the water). The most important events of the game will take place in this dungeon so, I meant to make it at my best.

Polish and reuse. As I read somewhere, in visual assets is very important to focus and extra polish just a few of critical assets (often in AAA titles those are the females characters) that they can stand out. In my case I wanted this level to be extra neat, also for a very technical reason: well done floor and pillars in this stage would permit me to reuse them with just some colors swap or tiny mod in many others stages.

Reuse and colors swap are not just cheap way of time-saving. Without the limitations from the past you can tweak a lot the appearance of an enemy/object, but with all the previous information the player got from that type of enemy/object he already met. 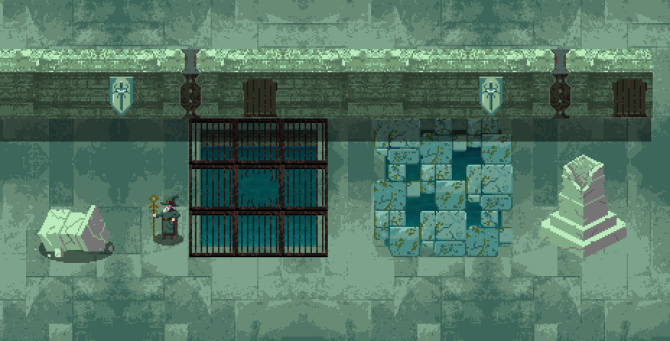 Readability. It’s first time I approach tileset and pits, so I had to understand a few things. Modularity was easy, but depth and borders gave me some issues. Especially the water pit. Because when you see a black square in a game, it’s a fact that that’s a pit, but a still green-blue rectangle looks just like a carpet.

I did not want to create water animation, according minimalistic style of Wizards of Unica, but because in our game the battleground is important as much as enemies, and will be interactive as well, I needed to give to water pit full evidence. There is an amazing tutorial by World of NoeL about how to animate water, and it saved me so much time and struggle! I animated it in 4 frames instead that 8 and with a couple of faded pillars that looks so neat, and not overworked at all!

“Uuuh, look at that water!”

Day 5 and 6 I focused on refining check point #2 and #3, with floors design (crevices, green, glyphs), lights & borders ideas (room shape could be more varied). And I also gave myself some audio design indication.

I painted last game play’s elements and added some wall and pillars’ variations.

And now I’m ready to start the evil twin of this stage: the Temple of Havok, where Rake will meet his first Spirit.

If you are intrigued by this chellange and you don’t want to miss any update you can follow me on twitter! And if you want to give me a boost you can offer me a coffee, making a donation to help me making a bigger harder stronger Wizards of Unica!

Thank you so much for your passion and all your joyful feedback about my last article! I’m so glad all this can somehow being helpful!