Unstoppable like a tornado. Contest is closed, solution found.

After some introductory videos, today's chapter shows you the real thing. Well, not at all, this is still a level intended for PR purposes, but it was designed to be played like a real puzzle.

There's an initial stage (planning) where both dimensions are frozen. Combine soldiers must end inside the shack before tornado destroys it and antlion guardian is the only thing which will force them to escape from labyrinth. Player intervention is important to avoid casualties, before the shack does its job of course... There's however a time restriction, you only can spend 60 seconds in the tornado's dimension so that's the time it takes to reach the shack. Pure puzzle levels shouldn't include this urgency element, DR will feature pure and not so pure puzzles. The end is quite gratifying; this is probably an exemplary mission in that aspect. The tornado is also quite active in gameplay terms, isn't just a mere visual trick.

This is another major feature, Dual Reality makes extensive use of it. Here you can see the level designer freezing, it's triggered and player cannot control it in any way except to finish the effect when dimension switching happens. As you may guessed, player also can control time freezing sometimes ;) It favors a quiet environment so player can focus in puzzles, other times it'll be part of the puzzle solving mechanisms. There are levels where focus is placed on time freezing, dimension switching may be secondary. 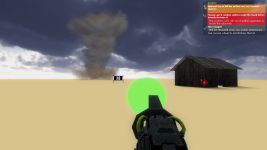 I'm quite proud of this feature. It allows you to display from small hints to multiple tasks using long text, objective signaling (target or glowing) and even sound reproduction associated to each element. There's no restriction for the item amount, player can set how many are visible at a time and scroll through them. 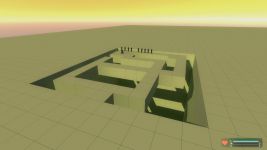 The video shows a way of solving the puzzle (getting combine soldiers into shack), but that's not the only way. There's another approach, simpler and faster. Taking in mind the indispensable condition to solve the problem is antlion must be somewhere in the labyrinth (alive) , what you would do to simplify the process considerably? First correct answer will receive early access to DR alpha, around February most probably.

LOl is it OZ? amazing!

Looks truly awesome and I'm gonna enjoy playing this thing once it's out.

Good luck with this project.

Holy **** this is the best technology of HL2 i ever seen in my life.

Great video!
I would just take the antilon and the combines to the dimension with the shack and let them run away until there in the shack.

nice one! I see no requirement that it must be in the dimension seen in the video and here I was breaking my head over it o.0

Nice idea but whats to insure that they will run into the house?
Also he says the antlion must be in the labyrinth.

in the Labyrinth could be seen as just in the trigger area(although I believe he uses seperate parts of the map...)

Anyway you're right though, combine might not get into the shack that way, they'd get killed earlier.

They need the labyrinth, aren't that smart to walk like that :p

lol, this is AWESOME

Looks great :) I envy your programming skills.
Now to see if i guessed the answer.
Place the antlion in the labyrinth dimension but put the box behind it forcing it to run at the combine. Since only eight need to make it to the shack the ones closest to the antlion could die and the rest make it and thus speeding the whole thing up. Also i noticed that there is a sharp bend if the ant lion gaurd goes this way it will give the combine enough time to get to the shack too.
Hope im right. Tho it seem too similar.

Cold :) Some combine may escape, but a lot more would die. The correct answer is something very specific, I mean there is no doubt it will work.

Damm, you have to make me think don't you :p

Ok something simpiler, you put the antlion on the rim of the labyrinth (the area where you walk in the vid) The combine run from the sight of the antlion and as the antlion trys to run around the edge to get at them the combine are forced around the path into the shack. Placing the box near the edge may help buy them some time too.
Im running out of ideas here and im not that condefent about this one, seems to unsure but I have to try :) .

Seems like im guessing every possibility except the correct one.

Ok one more go:
You send the antlion into the other dimension and then when the combine start to at the straight part run send them into the dimension with the tornado and they should run straight into the shack.
I hope.

If you put the antlion in the labyrinth at the opening to the house to start off with, I think that the combine would probably just figure out a way around him.

jesus christ some of you guys dont even see how ******* INCREDIBLE THIS IS, HOW DO YOU EVEN MAKE MAPS FOR IT? xDDD. seriously the whole looking through that mirror thing into that other dimension is SOOO COOL, this mod would have definitely got MOTY if you had shown it earlier

Thanks :) Regarding how maps are made, I'll explain it soon. The basic stuff is simple: there's a lot of vertical space unused if you look at any map in Hammer grid. So each dimension in DR takes half the vertical grid (16384 units). Everything is duplicated, obviously.

That looks really awesome, you must be one hard worker.

That is too much awesome!

Perhaps I wasn't very clear explaining, don't want to make it very clear either but... don't look for over-elaborated solutions, isn't something radically different to the actions shown in the video, just requires less steps. The screenshot showing the labyrinth is important.

this looks genius but i don't get whats happening

If it wasnt clear what bit, I highlighted it in red for you I186.photobucket.com

Oh yeah, we have a winner :) I'll contact you via moddb soon hopefully. You only need access to Source SDK Base-OB, by the way.

If I'm not mistaken, there's an off-lying two squares on the left-middle part of the labyrinth (Screenshot point of view). I'd imagine you could teleport it there and lock it in with the box, soldiers run in, free it, it follows, teleport soldiers out and laugh at it's pain...Timing could be hard, considering you can't stop it right at the door though...

That's it, however you posted a bit too late sorry. Thanks for participating to everyone. I'll post simmilar challenges in the near future I guess.

Ah at least I know the answer now, Fair play to the two of them for getting it with out spamming. Even with spamming I didn't :)

Better luck next time mate. For now, stick to mapping.

simple: antguard runs to where that little block sticking out of the maze is (top left side) and gets blocked off, Combine run :)
edit- didnt see the winner :(

I cant wait for this mod (:

I think the next video will help you

This looks like it will be a ton of fun to play!
Good luck to you guys, I'm looking forward to seeing a release :)