"AI's everywhere" is pretty much the best way to describe the current developments in Veteran Mod for Dark Crusade. Well... That and overseeing the work of voice actors/actresses for the custom Lost and the Damned units.

Posted by GreenScorpion on Jun 1st, 2017

So lets start with the AI, shall we?
I have been adding all units, buildings and researches to the AI so they can use all those new things against human players.
The AI is generally aggressive (depends on the race) and will often try to attack early in the game.
Currently the Lost and the Damned are the most aggressive of them all but that is because they are not yet balanced in what relates to attributes.
Even the strange and mysterious marines of the Lost Chapter will now move and fight on their own.

More things to come in what relates to the AI but I can't reveal everything can I?

Watch an free for all AI match poorly recorded by me if you can't believe my words:

Voice acting
Another good new is that voice acting for the parts related with Lost and the Damned units is going well and some units are already recorded.
This is one of the major objectives for me as all races need as much adequate voice acting as possible.

Check this thread for more information on my current voice acting needs:
Voiceacting.boards.net 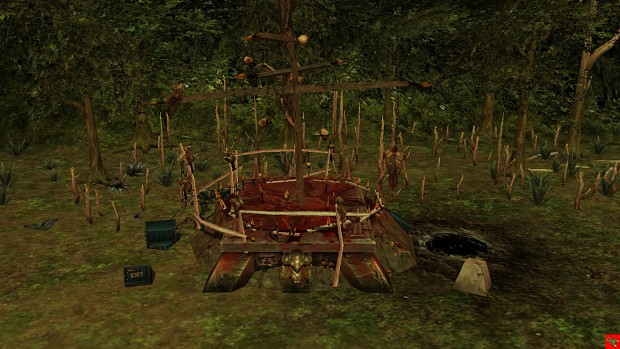 PS: The current objective is a release of the mod before the end of 2017.

Find me on patreon at this location:
Patreon.com

i regularly play against AI with smarter Ai's is so cool. sadly dont have DC yet, is there SS version release later? ty for your hardwork!

Won't say impossible but highly unlikely that I get the time to convert it to SS.

As a person who doesn't have soulstorm. I say it's time you guys feel how those of us who own Dark Crusade and not soul storm know how it feels when the cool mods move to soul storm.

Also thank gawd man, I thought this mod was dead.

Quite the opposite! Really busy making everything work together and completing work on each of the races.
It is work that is not so visible but still needs to happen for the final product to be as good as it should ;)

Lots of goodies to come, especially with the amazing voice work that complements thudo's masterpiece at revora.

Good day! First I`d like to tell you that your models are very good - I downloaded several of your released resources and use them in my own mod (which I made purely for my own home skirmish plays, I wouldn`t want to take credit for your hard work).

I would like to know if you are planning to release some more models for such public use - like your kasrkin priest models for Imperial Guard and so on? I (and I`m sure many others) would be very grateful if you did!

Regardless, that you for all the hard work and good luck with your mod!