Companions now have completely new dialogue.
Some lords no longer hold the wrong fief.
Rain House and Claw Isle prison scenes have been fixed.
Bridge positions have been tweaked.
Volantis now have bridges connecting the various islands.
The Eyrie is no longer impregnable.
Lords should no longer receive reinforcements at an alarming rate.
Swords have been made a bit better.
Damage/armor modifiers have been tweaked.
Couple of items have been removed, they where superflous.
Tournaments have been fixed, should now show the correct score/timer.
Essosi lords have been given new faces, to make them more Essosi like.
Some Essosi lords have received new names, based on the dothraki and valyrian languages. Read more about those at www.dothraki.com
Tournament rewards have once again received an overhaul.
Companions have received new gear.
Ladies have been given proper clothes.
Did various tweaks to the world map textures.
Due to popular demand, the Starks have been given a new banner.
Stannis Baratheon has been given a new banner.
Added Caractacus' custom scenes for Stonehelm, White Harbor, Erenford and Oldtown.
Added Dragonstone scene.
Added Sharp Point scene.
Added new facial hair options.
Added new hair options.
Fixed world map crash.
Cattle now follows the player.
The Essosi names have been overhauled.
Added new system of water travel. Travel where the heck you want.
Did various map tweaks.
Re-did some facecodes.
The invading faction no longer looses all its units when they spawn.
Fixed various village scenes.
Improved map performance.
Re-did bandit parties.
Added new "elite" bandit parties. Rare.
You can now recruit lords to join your faction.
Fixed various dialogue options.
Fixed some flora hitboxes.
Small changes to the flora_kinds.
Made font slightly smaller.
Various music changes.
Various interface changes. 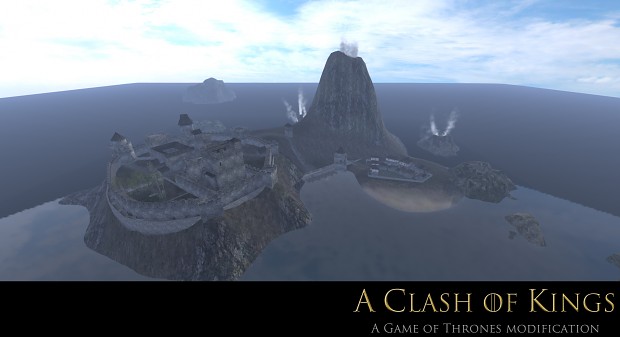 Isn't the Eyrie supposed to be impregnable though?

Go download 0.92 and siege the Eyrie then come back and ask that question again :P

The Eyrie had one ladder that was basically impossible for enemy troops to get all the way up. They'd stand on the ladder while archers pick them off.

The Eyrie may have been described as impregnable in the books, but it shouldn't be in the game. It's difficult enough without a bug to make it impossible. :P

Well, it should be. I mean there is a starve out mechanic, and that is the purpose of the Eyrie. It's supposed to show that impregnable is impractical since they can't feed themselves in a siege for more than a few weeks and winter ***** them over.

Making the Eyrie basically impossible to assault is good, because when you siege it you should have to starve it out.

It's still nigh impossible to assault. Have you tried it yet?

You have to climb a very small, very long, wooden ladder to the top of a mountain, while being continously pelted with arrows, bolts and spears.

Give me ten good men and i'll impregnate the bitch!

Is it possible to see the troop tree anywhere?

I got a weird bug... Leveled up to 24 at the char creation, and then the first event that is supposed to happen (the robbery), the merchant didn't shown up.

That's because you used cheats to level up to 24.

I got the same thing i had cheats turned off it just defaulted my character to lv 25 and made them a transexual viking for some reason... Not sure which one concerns me more. Also the thing with the robbery happened to.

I have had the same problem I haven't used any cheats it has twice randomly put me straight to 25. Plus my guy also got a lovely dress aswell lol.

It is a rather lovely dress. I've fixed it but yea :/

Woo! Thanks for the work you did to push this out, Cozur!

The new banner of Stannis Baratheon is nice. I'm looking forward to the 94 banners.

Are lords defecting right this time?I mean when their faction is defeated?

Bug! If I release a prisoner in Stonehelm he is still kept in prison, and when I speak with him, the dialogue has no end and I have to close the game.

I am A huge fan of this mod,however I am somewhat disappointed with the decline in armor available for the unsuilled .I know its a silly little thing to mention but I think that the scale and mail armor provided for the unsuilled suited game play and more importantly the look and feel of the game far better then the new leather and cloth armor. But anyway I cant wait to play this new version and keep up your amazing work :).

Why do you keep saying "unsuilled"?

That clearly is not a word.

The mod options aren't available anymore in the menu, is this normal Cozur?

You show a couple of images with new armors can i get this in game?

i noticed a bug. it says my party is out of food yet i have plenty of food in my inventory, i even sold th food i had and bought more from another market. this problem only occurred for me with the 0.93 version with the patch

Did you use cheats to boost your level to ridiculous heights?

first time yes, i tried a new game and it still happens, i am lvl 1 with 5 levies versus 500 bandits packed in each other :).

i dont know if its intended to create variety in women avatars but in .93 they are fuuuuuuu ga ly

I Don't like the new main menu music how do i get the old one back.

This might have been asked before. But will you add the wall my good sir?
It would be a pretty simple concept. A big wall of ice. And some ruins and the three inhabited castles alongside it. Of course.
If i am correct. Then i understand why you dident add the Night's Watch.
They swear loyalty to no one. This is of course the main problem.. But a solution would be that you could start as a brother of the nights watch. Rise to the rank of Lord Commander. And there change the destiny and either remain there fighting wildlings or go out into the rest of westeros and conquer.
If you implent this idea, then i have some suggestions about the set up of the Night's watch. All listed below.

- Send Wandering Crows to gather thieves and other "volunteers" to the nights watch.
- Send Scouting Patrols north of the wall.
- Ask for help from the lords, In form of food, Wepons and soldiers

I might have missed something you have written about "The wall" and the Nights watch before, Then i am utterly Sorry.

Just send me the required code to implement all of your ideas, and I'll include it in 0.94

Well no need to be rude

Am I the only one who wants to have Asha Greyjoy available for marriage? ;)

She is available i married her :D

how did you do that? Can she be a lord on your faction at the same time?

I have been planning on trying to marry her. I saw that she actually holds a fief so perhaps it is done in a similar way to female players courting male lords. In that case it is just talking to them and asking about forging a lasting connection then proposing marriage. It may take a lot of work to get relations with her up near 100 and renown up pretty high as well. Joining her faction is probably going to be easier than convincing her to defect. Perhaps we can rebel together later on.

This is the best mod because it has the best combat. I tried to play the floris mod, but the lancing system on horseback felt weird. Also, I really didn't like how every swing came from over head. This mod's combat animations feel so much more natural.

Cozur, can we please have the mod options back? Pretty please? And is there a fix for health bars? They aren't showing up even though they're ticked.

The lancing system takes a while to get used to... but the combat seems identical? In this mod, my guy hits exactly like he did in Floris :P

got the patch but tournaments are still broken for me. i cant bet, just says the value of the slider is invalid. i sometimes dont get my price, cant remember wich ones but some textures are missing at the start of the tourney. plus i only get 20 renown even when i finish first and it says i got 40

Also Queen Margaery Tyrell says "I may never see my brother Sir Loras Tyrell,again...she is a prisoner in the Dungeon of Wyndhall." i know he's gay and all but still lol.

Not sure why, but ive been playing this mod since version 0.6 and never had any lag problem any where, but ever since version .92 or maybe the version before no matter where i am i get a weird lag, even if i have on lowest settings and im in a place small like a tavern it still has a unusual type of lag, it freezes for a fast second every time i look a different direction in game, i sure its something with my pc or maybe a corrupt file but ive re installed and it still does it. Anyone know what is wrong? or solution.