A Clash of Kings beta version 0.7 has been released. Grab it at the downloads page, or at the Nexus. Links for everything can be found on the summary page. 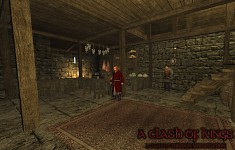 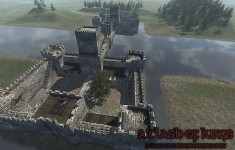 Keep in mind that A Clash of Kings is still in the beta stage, and as such is prone to have the odd bug or unpolished aspect. There should, however, be nothing gamebreaking.

Add more custom scenes.
Polish everything. Currently, the new items and troops are very unpolished. I decided to release it before it was perfect, rather than keep you waiting. It is still, however, much cleaner and well-implemented than most modifications.
Various graphical updates will be applied, mostly polishing and tweaking textures.
Fix any bugs that might occur.

I would like to extend my sincere gratitude to Caractacus, who have been hard at work with many of the new scenes, Windyplains who helped me with the tournaments, Kuauik who allowed me to use his old models and textures, and Dunde who answered all of my silly invasion questions.

Remember to support George R. R. Martin by buying, and reading, his amazing books, and HBO by subscribing to their channel or buying the show on DVD.

Im having no luck finding it too

Looks great! Curious though, is there any plan to fix/rework the Family tree's? Or has it been done already?

Experiencing some craaaazy lag spikes and freezes in 0.7, and it sometimes randomly crashes when I'm about to go into the battle.

I'm not sure if it just takes a really long time for a lord to give you a castle or if it is glitched can anyone confirm?

i really enjoying the mod, but i see one bug in tournament. I can not bet any gold.

If you click on "Tournament Options," there's a "Persistent Bet" slider that you can adjust up to 200 silver.

I'm having an issue with rescuing a captured lord in Hornvale. Where there should be a door to the prison, it instead says, "Door to the Arena," and when entered takes you to a large empty field with two NPCs who fight each other to the death - and then nothing happens. So even if I kill all of the guards in the castle, I can't access the prison to free the lord inside.

During 0.6, lords definitely didn't allocate fiefs to vassals. I don't know if this has been fixed in 0.7, but if not, it needs to be addressed immediately; that's a huge, virtually game-breaking bug. I'm also fairly certain that when you try to form your own kingdom, the game never sends any diplomats your way - whatever they're called, the guys that sit in your court and help you run certain aspects of the kingdom like troop allocation.

Wow, you reported the same bug as a million other people, and skipped the "known bugs" section, just to write this. Brilliant!